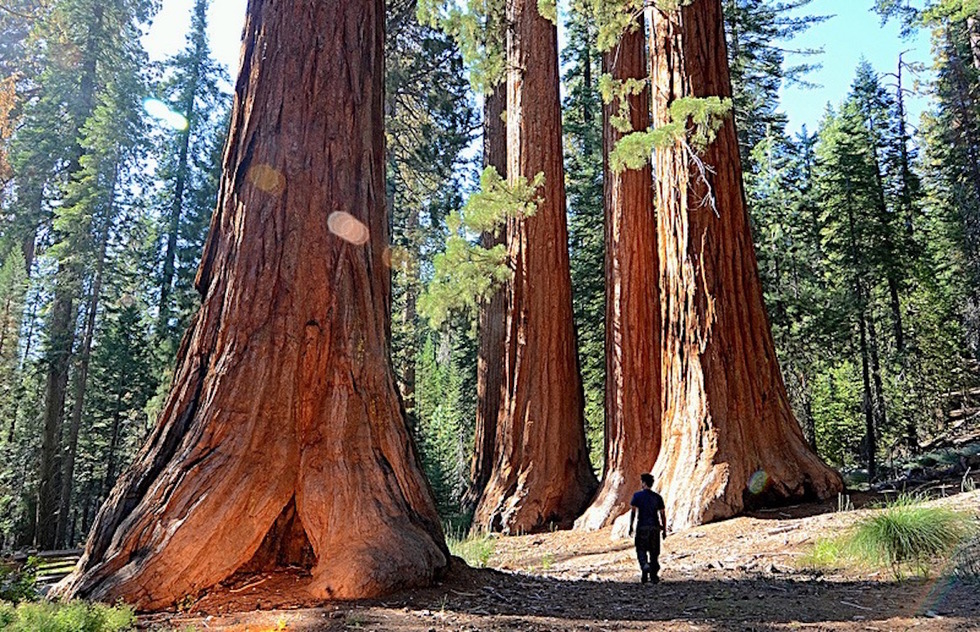 By Andrew Fleming
They are surreal survivalists, living through the harsh new conditions each decade brings: bitter winters, long droughts, floods, fires, vandals, pollution. One specimen has even been around for over 80,000 years, so 60,000 thousand years before the first humans arrived in North America from northern Asia. These trees have truly remarkable stories that make them more powerful than a standard national monument, because they're still living witnesses to history. 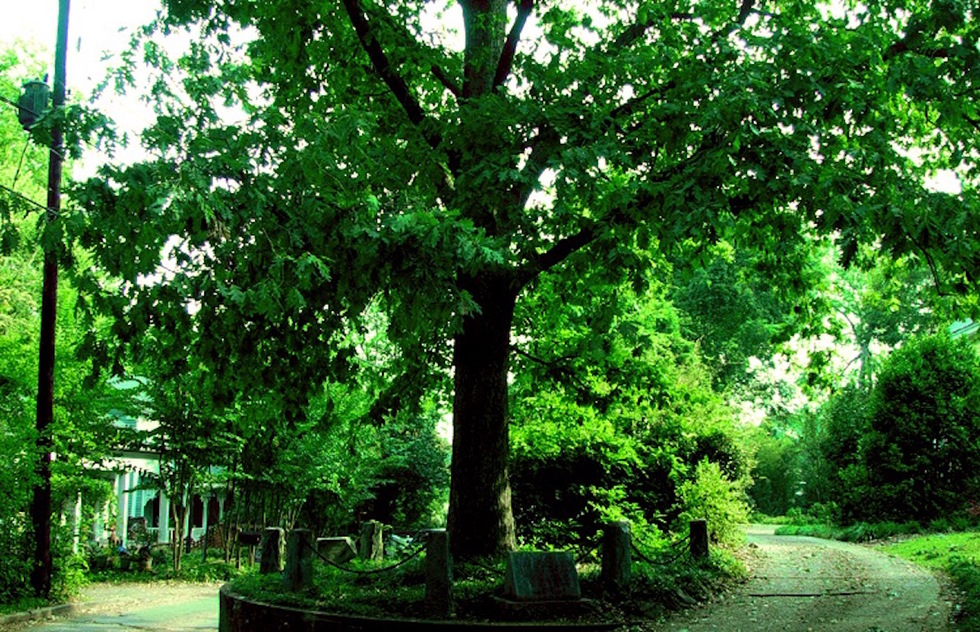 Wikimedia Commons
Son of The Tree That Owns Itself, Athens, Georgia
This white oak on top of a verdurous hill has inherited the legend of its father: The Tree That Owns Itself. According to local folklore, Col. William Henry Jackson, a professor at the University of Georgia, treasured fond childhood memories under it and willed ownership of the tree to itself in the early 1800s. A plaque captures the colonel’s nostalgic sentiment: ”For and in consideration of the great love I bear this tree and the great desire I have for its protection, for all time, I convey entire possession of itself and all land within eight feet of the tree on all sides.” The original one died in 1942, but the local Junior Ladies Garden Club, enticed by its quaint history, grew a sapling from one of its acorns and planted it in the same location, passing the legend to new generations.

Finding it: It's two miles north of Athens on S. Finely St. 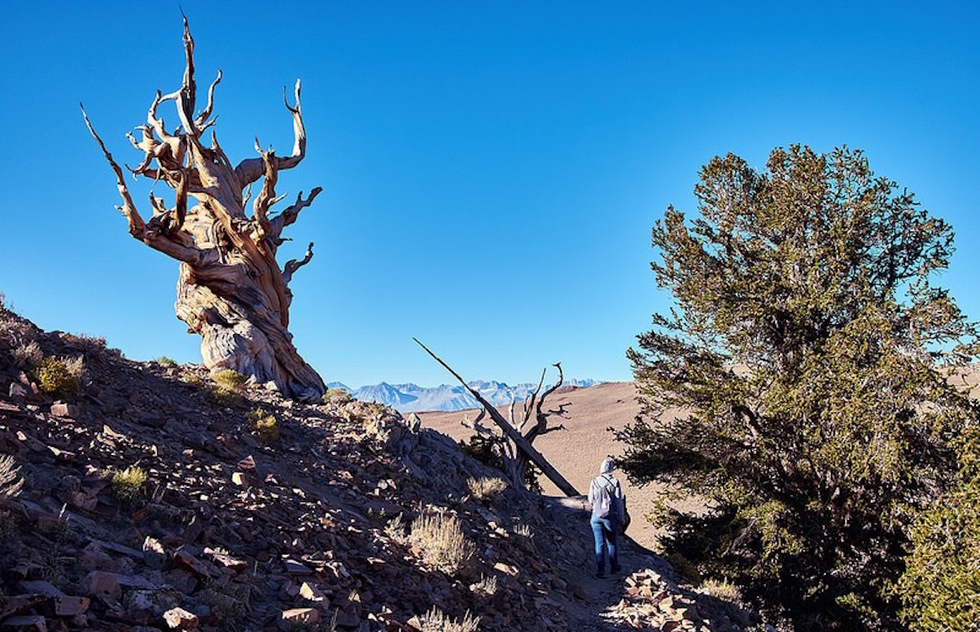 Estimated at around 4,800 years old, this tree was a mere sapling when the ancient Egyptians built their pyramids. For decades, it was known as the planet’s oldest living non-clonal tree (i.e. it hasn’t been continually replacing itself with genetic clones.) It lost that title in 2013 when another Bristlecone pine (p. longaeva) of the White Mountains was discovered to have stood for over 5,000 years. Fearing souvenir collectors with pocket knives, researchers have not released the exact locations of either of these treasures. For Methuselah, however, they’ve at least said it’s in the Methuselah Grove of the Ancient Bristlecone Pine Forest, so if you take an afternoon to walk this otherworldly wood, you’ll surely see the old tree. You just won’t be sure exactly which of the one it is—which only helps you appreciate them all.

Finding it: 310 miles southeast of Sacramento in the Ancient Bristlecone Pine Forest, just north of Death Valley National Park in a section of the Inyo National Forest, which borders Nevada and California. 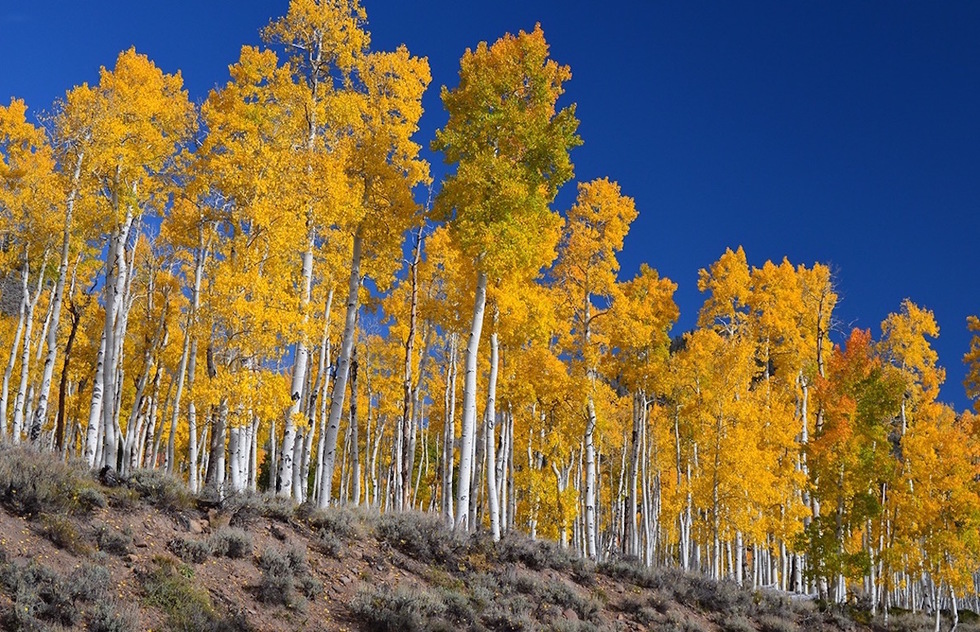 So this one doesn't look so much your usual tree, but rather a sprawling colony of regenerating clonal stems that connect at the root to form one massive organism. Pando (the grove’s name is Latin for “I spread”) consists of approximately 47,000 quaking aspens, which cover more than 100 acres of forest. Weighing in at about 6,000 tons, these aspens are claimed to be the world’s largest living organism by mass. Age estimates for Pando range between 80,000 thousand to 100,000 years old, which likely qualifies it as the world’s oldest living organism as well. Since each of the trees possesses the same genetic information, they sync perfectly to set alight gorgeous gold foliage every fall. 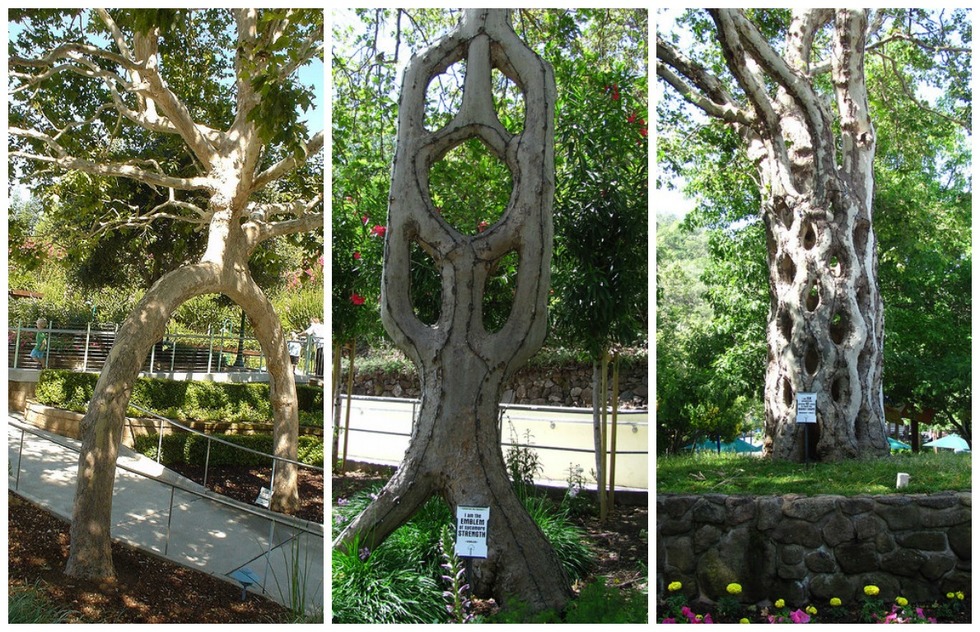 (Left) Lyn Gateley / Flickr (Center, Right) Jeremy Thompson / Flickr
Circus Trees, Gilroy, California
Swedish-American farmer Axel Erlandson shaped these bizarre, seemingly impossible trees as a hobby after moving to Hilmar, California, in the 1920s. With an evidently large amount of time on his hands, Erlandson carefully grafted and trained his young saplings into the most curious contortions, which his wife then suggested would make a good roadside attraction; “See the World’s Strangest Trees Here,” the billboard crowed. When children would ask Erlandson how he made them, he would simply respond, “Oh, I talk to them.” He never did reveal how he created his arboreal masterpieces. They can now be found in Gilroy Gardens, a Mother Nature-themed amusement park in the Central Coast region of California.

Finding it: 35 miles south of San Jose in the town of Gilroy 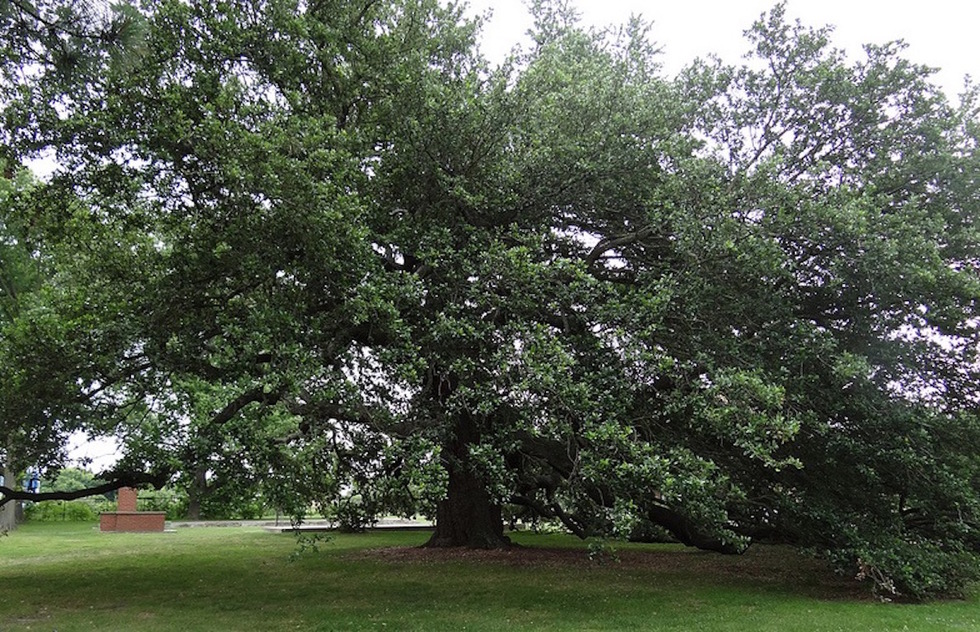 Esther Westerveld / Flickr
Emancipation Oak, Hampton University, Virginia
This live oak on the campus of Hampton University has long stood as a symbol of perseverance, freedom, and education. After Union General Benjamin F. Butler gave shelter to fugitive slaves as “contraband of war” during the early days of the Civil War in 1861, crowds of ”freed“ people began to camp in the area around this tree. The sprawling oak served as the first classroom that newly free children and adults were allowed to attend. These early classes were taught by Mary Smith Peake, who then helped form The Butler School in 1863, which was constructed beside the tree. Over time, it became a powerful symbol for African Americans, and in 1863, the first Southern reading of the Emancipation Proclamation occurred under its limbs.

Finding it: At Hampton University, 16 miles north of Norfolk across the James River off I-64 West. 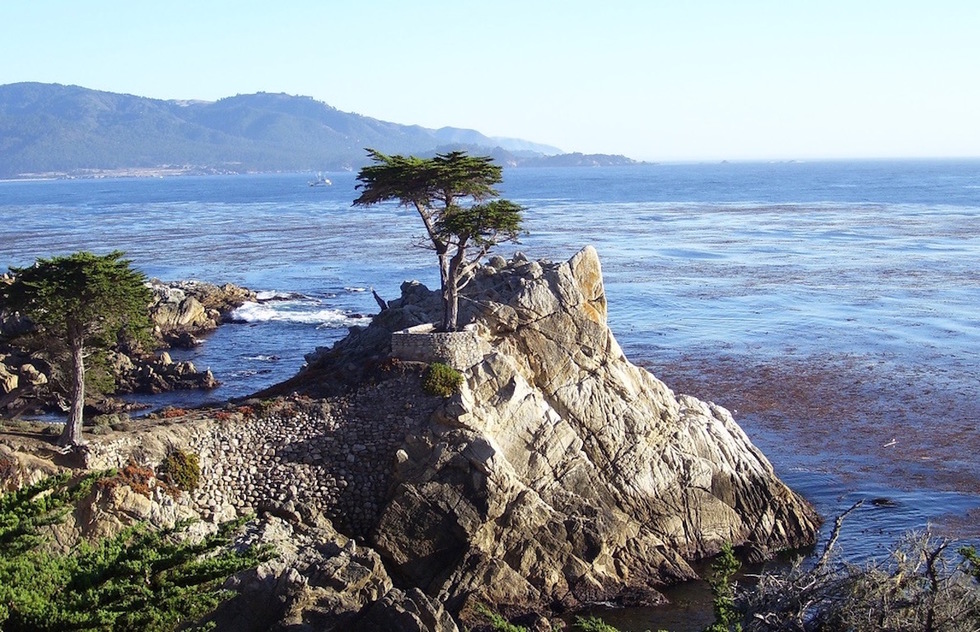 With roots powerful enough to dig into the rocky outcropping and branches hardy enough to withstand strong coastal winds, this monterey cypress stands in stoic solitude on the California coast. That’s why it is appreciated by tourists simply for being a beautiful testament to life’s strength. It has survived arson, graffiti, and vandals who stripped its branches. Claimed to be the most photographed tree in the America, it can be seen along a famously scenic 17-Mile Drive in Pebble Beach. The road also features beautiful beaches, coastal cliffs, and the magical Del Monte Forest.

Finding it: 24 miles east of Salinas on 17-Mile Drive, inside Pebble Beach Resorts. 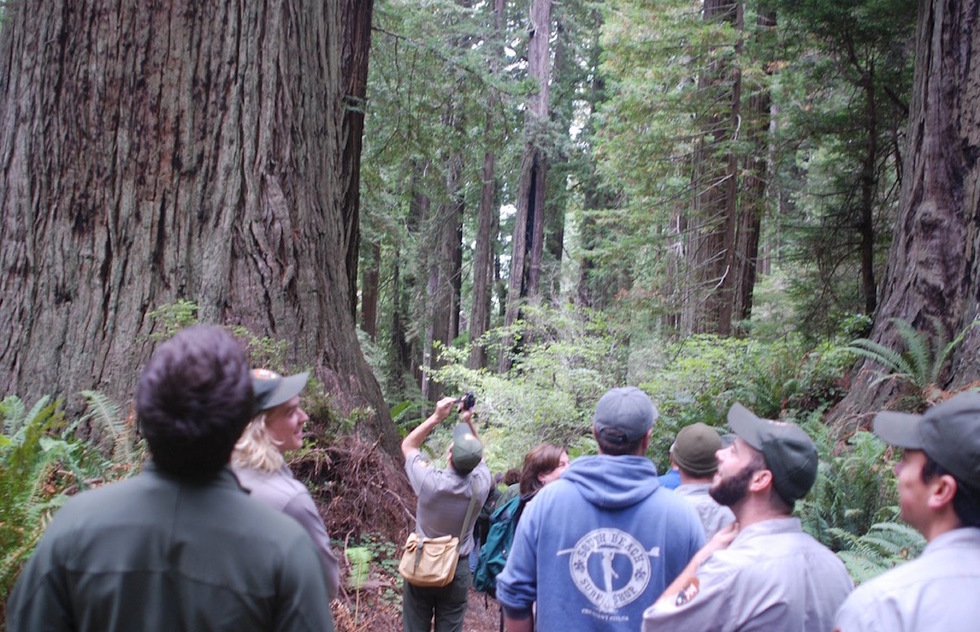 At 379 feet (and still growing), this coastal redwood is the world’s tallest tree. Discovered in 2006 by foresters Chris Atkins and Michael Taylor, this giant stole the title from a fellow member of its species, Stratosphere Giant. Hyperion was measured by a team led by ecologist Steve Sillett using a rather old-fashioned process in which a researcher climbs to the top branch and drops a tape measure with something heavy tied to it. Not wanting a rush of visitors to harm their discovery, Atkins and Taylor never disclosed its exact location, making “Hyperion” a properly mythic name for a tree located somewhere in the groves of Redwood National Park of Northern California (pictured).

Finding it: 310 miles north of San Francisco on Route 101 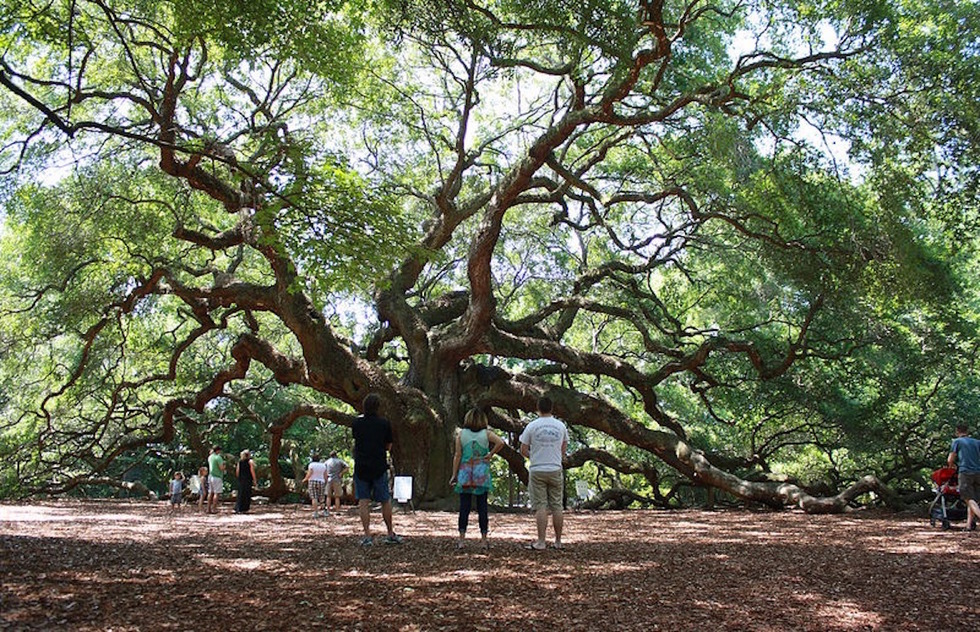 Seemingly enchanted by some benevolent witch, this lovely live oak has shaded Johns Island, South Carolina, for somewhere between 500 to 1,500 years (its exact age remains contested), making it potentially one of the oldest trees on the East Coast of America. With its longest branch stretching 187 feet, this tree produces 17,200 square feet of shade in Angel Oak Park. And its significance is not only natural but historical as well, as during segregation, African-American and white families would both picnic under the sheltering boughs, making the area a small haven from the racial strife. Today, it would still be very difficult to find a better place for a picnic.

Finding it: 12 miles southwest of Charleston on Route 700 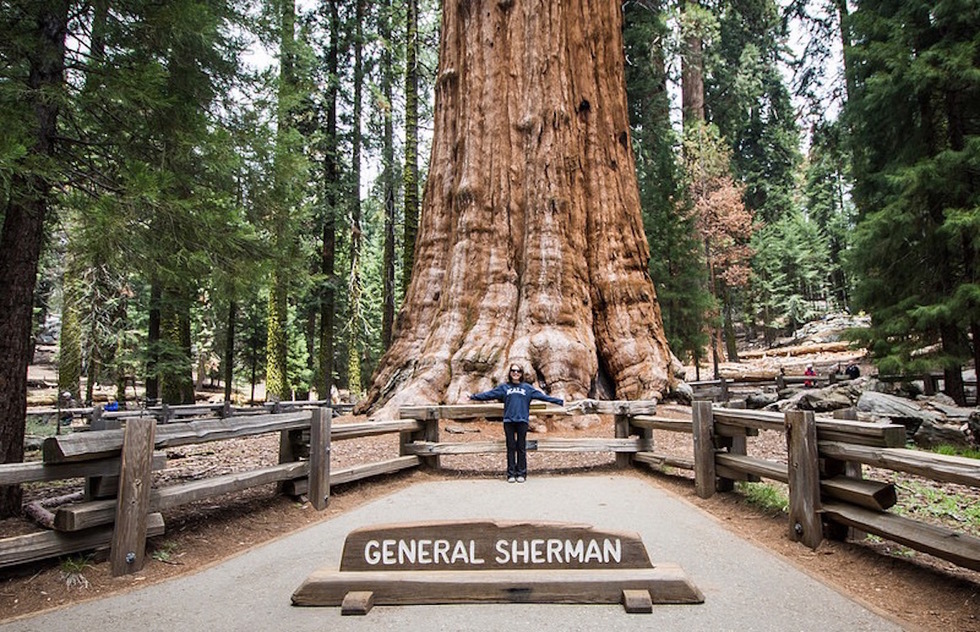 m01229 / Flickr
General Sherman, Sequoia National Park, California
It's impossible to have a complete discussion of great trees without mentioning the stoutest one of all: this famous behemoth towering over the Giant Forest Grove in Three Rivers, California. Standing at 275 feet tall with a 36-foot diameter, General Sherman’s 52,598 cubic feet of wood make it the world’s largest non-clonal tree by volume. At the ground, its circumference is a whopping 102.6 feet. General Sherman was named after the American Civil War General by naturalist James Wolverton, who served under General Sherman in the 9th Indiana Calvary. Exhibits explaining the natural history of giant sequoias line the trail leading you into its grove, adding to your appreciation. 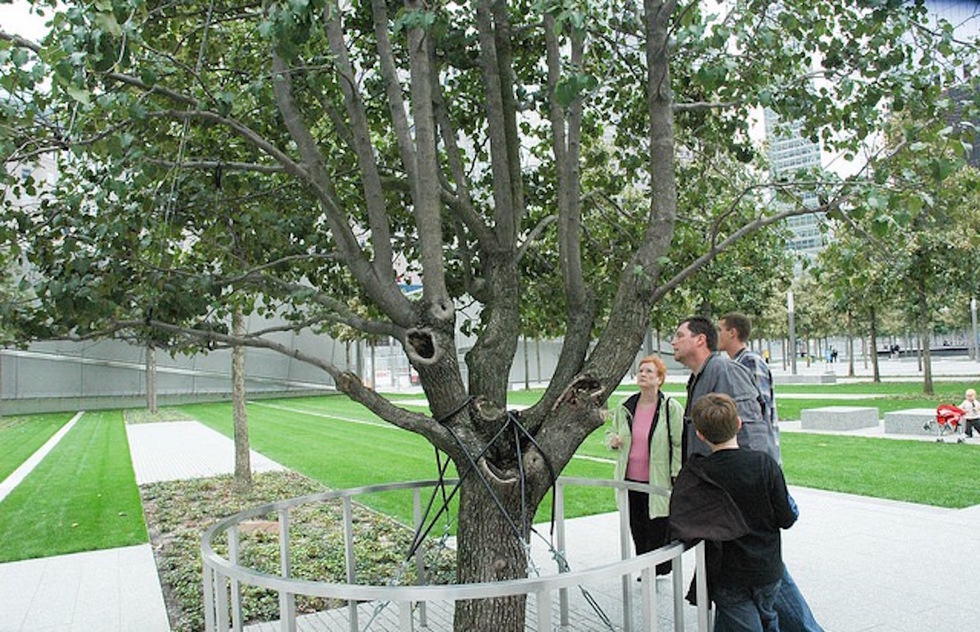 Tom Hannigan / Flickr
Survivor Tree, New York City
This tree was the last living thing to be pulled from the rubble of the World Trade Center after 9/11. On the surface, the tree that had once stood near the plaza between the Twin Towers looked dead—a burnt, cracked log. But in fact, life was within. And thanks to the New York City Department of Parks and Recreation, this survivor was retrieved and placed in the caring hands of horticulturalist Richie Cabo, who transplanted it to a Bronx nursery and revived it to a healthy state. The Callery Pear was returned to the site in 2010. New, healthy limbs extend from its scars, reflecting a powerful history that mirrors that of a city and a nation. The tree now blooms every spring.