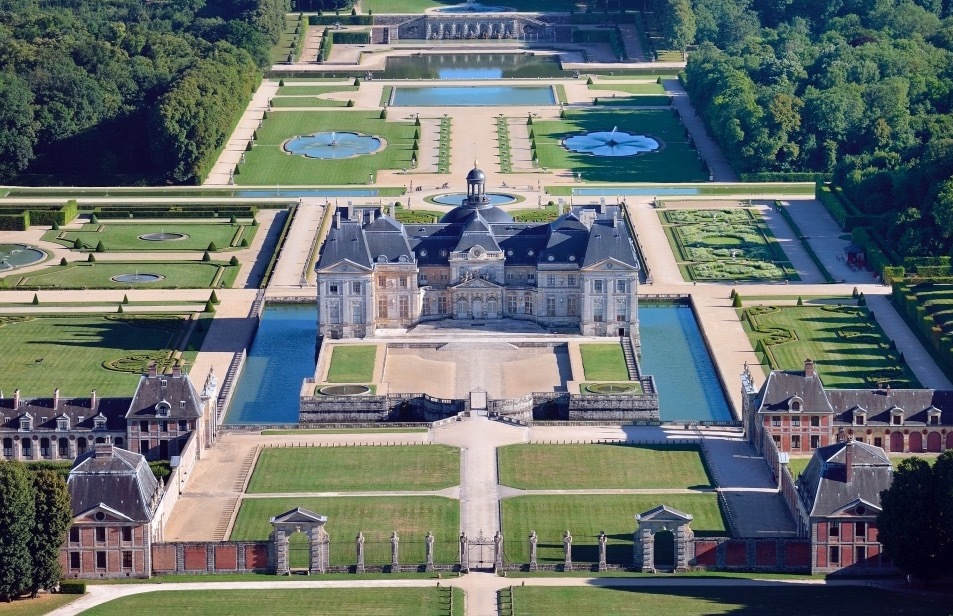 Skip Versailles and Go to These Amazing Castles Near Paris Instead

When Louis XIV summoned the French court to his sumptuous new palace at Versailles in 1682, he certainly didn’t foresee that three centuries later this call would be answered by 10 million people per year. But Versailles is not the only gorgeous castle accessible from Paris—you can get your royal fix without the enormous crowds at these other sensational châteaux scattered near the capital. 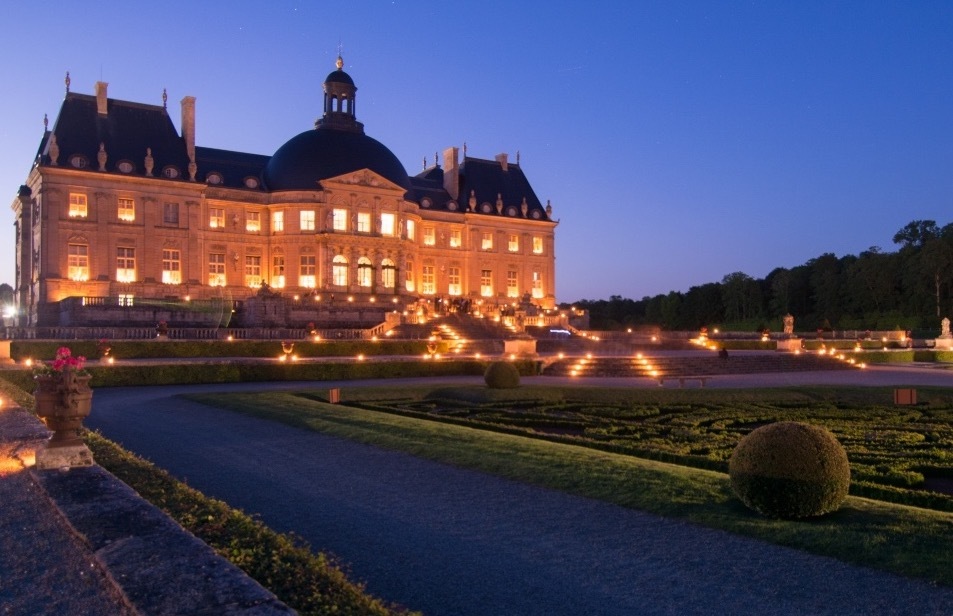 The inspiration for Versailles, this exquisite château was the first instance where an architectural plan, its interiors, and grounds were designed in unison. Built for Nicolas Fouquet, Louis XIV’s Superintendent of Finance, the castle was inaugurated with an extravagant celebration on August 17th, 1661. Furious at being one-upped, the king swiftly threw Fouquet into the Bastille prison and scooped up his château’s creative team to produce an even grander palace at Versailles. Today, visitors can tour Fouquet’s wonder during the day or get a feel for the era’s opulent grandes fêtes by attending one of the property’s regularly scheduled candlelight evenings. 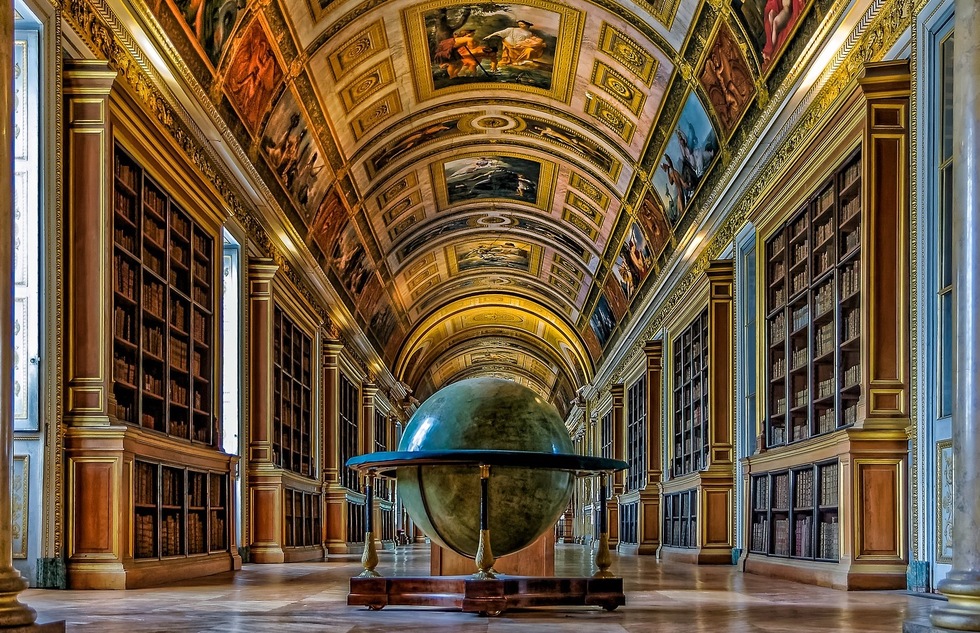 Often overshadowed by the showier Versailles, the Château de Fontainebleau played a much more important role in French history overall, hosting such illustrious guests as Emperor Charles V, the abdicated Queen Christina of Sweden, and Pope Pius VII. In 1528 King Francois I commissioned a Renaissance makeover of Fontainebleau; he brought in Italy’s top artists and craftsmen to update the decaying medieval fortified castle. Cast aside during Versailles’ heyday in the 17th and 18th centuries, the place came back into vogue when Napoleon Bonaparte refurbished a set of apartments and a throne room in his Imperial style. Make a day of your visit by exploring the castle’s stylish gardens and sprawling woods—once a favorite hunting grounds of the nobility.

Pictured above: the castle's library 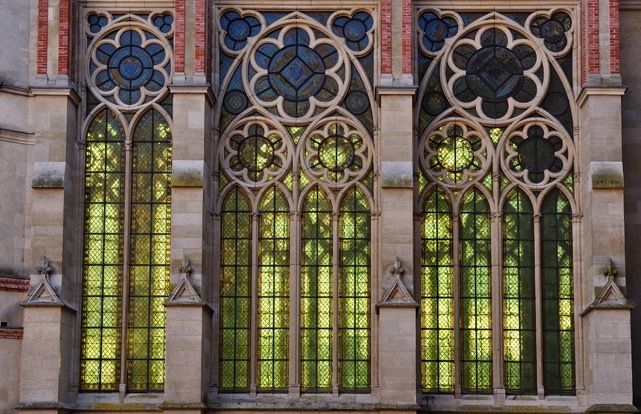 One of the easiest castles to reach from central Paris is located in the posh western suburb of Saint-Germain-en-Laye. This eclectic château has a rich and intriguing history dating back to the early 12th century. Astute visitors will note the uncanny similarities between its glorious Gothic chapel (one of its windows is pictured above) and Paris’ Sainte-Chapelle; both buildings were likely designed by the same architect, Pierre de Montreuil (though some scholars doubt he was involved with Sainte-Chapelle). Set on fire by Edward the Black Prince of England during the Hundred Years War, the royal complex was resurrected and expanded in 1539 by Francis I. Louis XIV was later born here but wasn’t especially fond of the site. He modernized (and destroyed) various aspects of the estate—adding new gardens designed by his favorite landscape architect, André Le Nôtre—before deserting it for Versailles. The castle now houses the National Museum of Antiquities, where you can peruse archaeological finds from around the country. 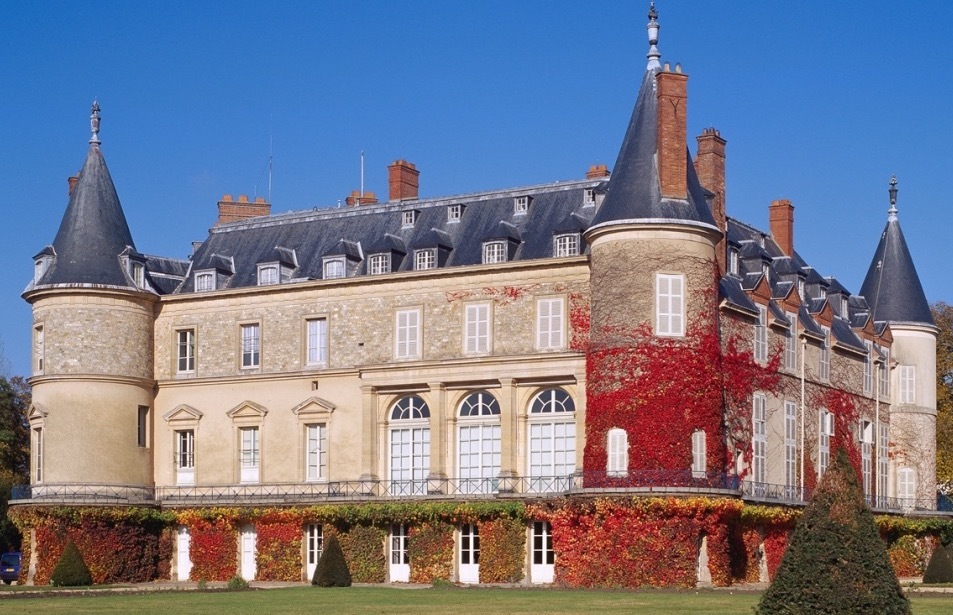 A château of a much different style, Rambouillet has clear medieval origins—just look at those imposing towers and turrets. Acquired by the marquis de Rambouillet in the 1600s, it passed a century later into the hands of the noble Bourbon-Penthièvre family. They refurbished the interiors in the era’s frilly Rococo style. The pastel walls and gilded mirrors have persisted until today. Louis XVI purchased the estate in 1783, primarily to extend his own hunting grounds at Versailles to include Rambouillet’s massive 47,000-acre forest. Queen Marie Antoinette was unimpressed, supposedly labeling the place a “gothic toad-hole.” Louis’ decision to install a quaint “dairy,” akin to the queen’s faux hamlet at Versailles, didn’t win her over, either. Still, from 1896 to 2009 Rambouillet served as the summer residence of French presidents; this was also where the first G6 meeting was held in 1975. 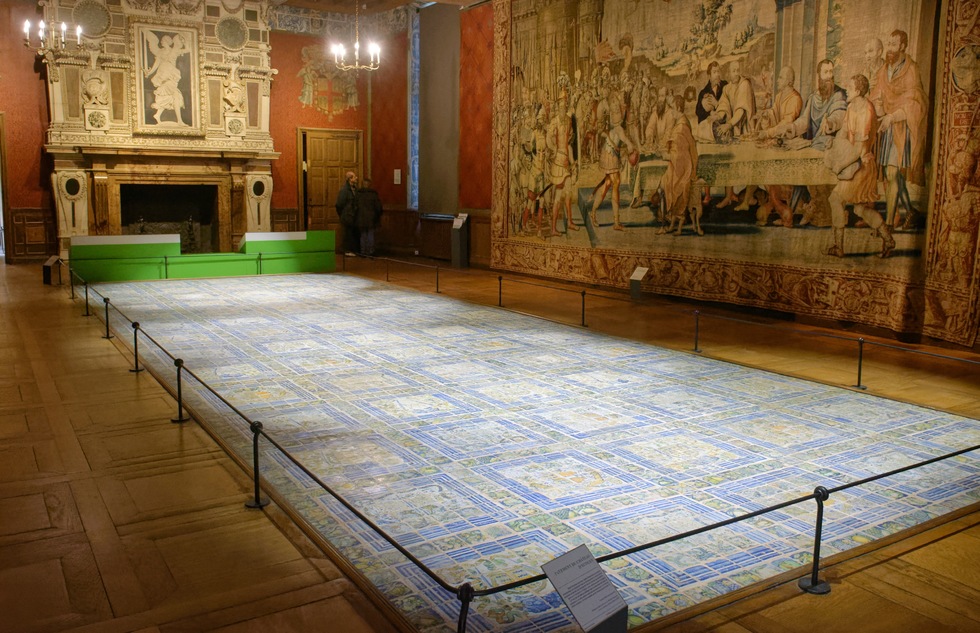 Not merely a refined residence, this castle was designed to incarnate the very best of the Renaissance—which makes it a fitting home for its current tenant, the National Museum of the Renaissance. The castle was built from 1538 for Anne of Montmorency, who fought alongside King Francis I in Italy. Like the king, Montmorency brought a love of the Italian Renaissance back with him to France, as you can see at his spectacular home. No detail was overlooked, from the carefully selected color palette to the porcelain floor tiles to the stained glass windows to the painted friezes depicting typical Renaissance motifs. After viewing the interior’s masterpieces, take a stroll through the expansive park and forest.

Pictured above: the castle's Great Hall of the King 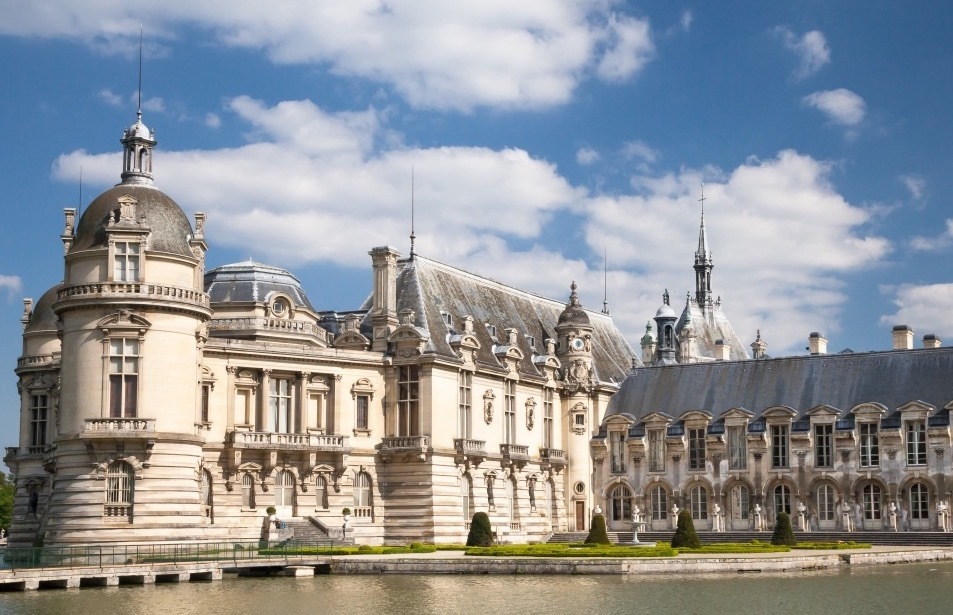 This sublime château is one of the loveliest in all of France. It is composed of two buildings: the 16th-century Petit Château and the Grand Château, rebuilt in the 1870s after sustaining damage during the French Revolution nearly a hundred years before. The castle is home to the Musée Condé, a superb art collection with masterpieces by Raphael, Botticelli, Poussin, Watteau, and Delacroix. The 285-acre grounds are equally remarkable and include a jardin à la française designed by Le Nôtre, a more casual English garden, and an Anglo-Chinese garden. In the latter you can stop in at Le Hameau, a restaurant set in a charming cottage where you can taste Chantilly’s famous whipped cream. The estate also contains the largest stables in Europe; guests can tour the Museum of the Horse and attend daily equestrian demonstrations. 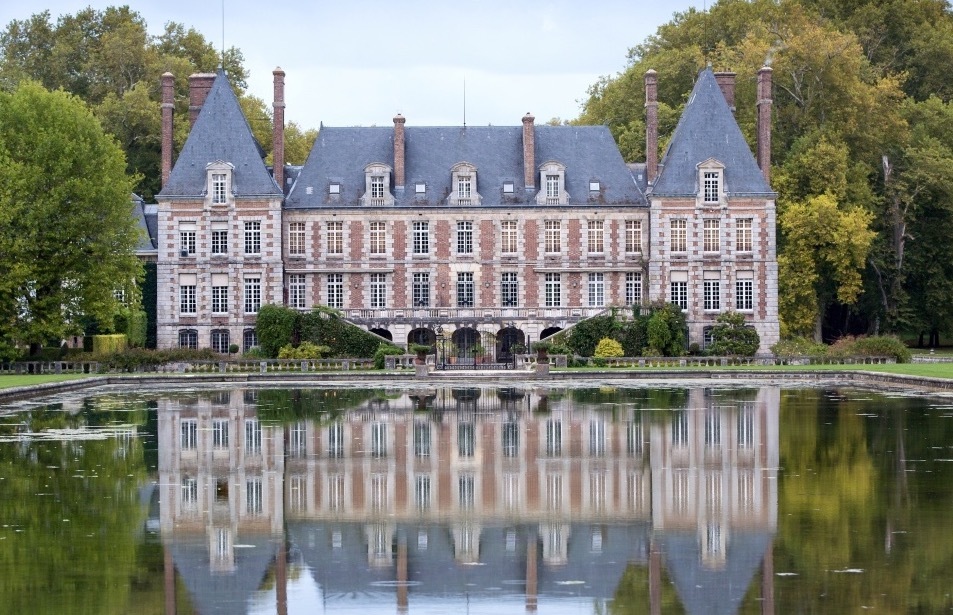 This unique 17th-century château is one of the few castles in Île-de-France that you can visit even though it’s still a private residence. Constructed between 1622 and 1630, the estate was abandoned in the 19th century until it was saved from ruin in the 1870s by Baron Samuel de Haber, a wealthy Swiss banker. He’s responsible for a number of enhancements, including a replica of Fontainebleau’s horseshoe staircase and the red-brick facade. The castle was later sold to the Ganay family, who have now owned it for four generations. It sits within a moat on a 200-acre park, featuring Le Nôtre-inspired gardens, weather-worn statues, cascading fountains, and gentle pools of water. End your meander through the park in its Japanese garden, where you’ll find a charming tea room. The château is open weekends April to November. 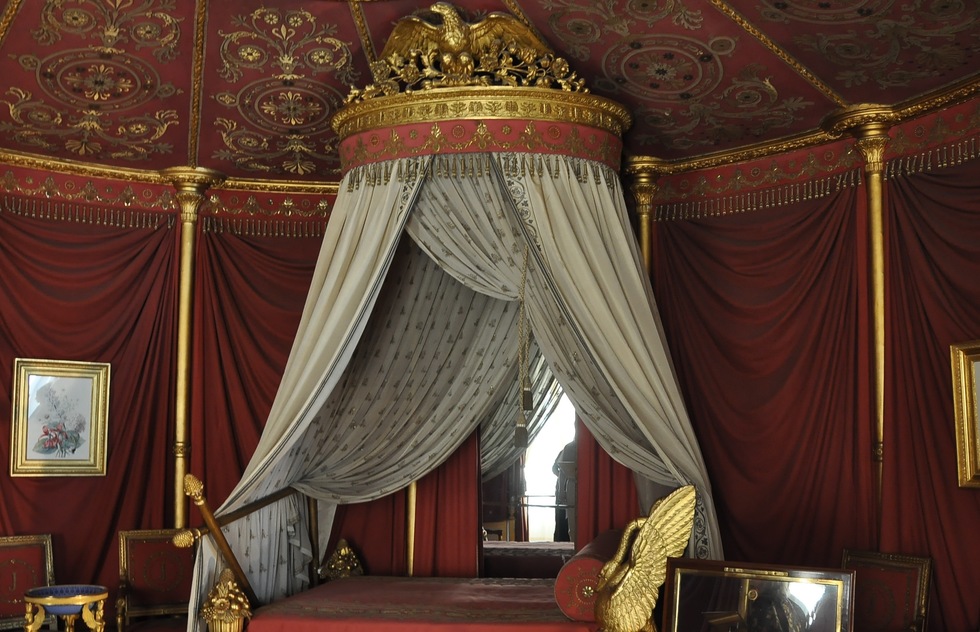 This elegant manor house west of Paris is most commonly linked to the woman who bought it in 1799—Joséphine de Beauharnais, soon to take the title of Empress as the wife of Napoleon Bonaparte. From 1800 to 1802 the château served as the seat of the French government, together with the later demolished Tuileries Palace in Paris. A favorite getaway for the Imperial couple, Malmaison was renovated and expanded quite a bit by Joséphine (her bedchamber is pictured above). She was given the castle upon her unwanted divorce from Napoleon in 1809 and died here shortly after his exile to Elba in 1814. Today there’s a fascinating onsite museum all about the couple, and a large English garden on the grounds makes a perfect place for a picnic or stroll. 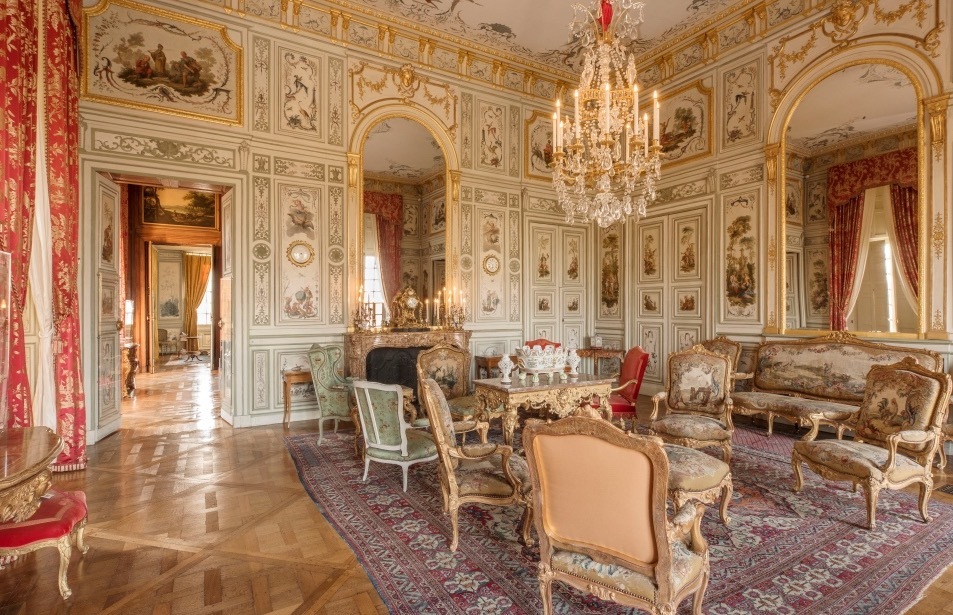 This awe-inspiring architectural gem is the epitome of 18th-century French art de vivre. After the ruin of the estate’s first two financier owners due to bankruptcy and embezzlement charges respectively, it became a lady’s castle of sorts, lived in by the princesse de Conti, the natural daughter of King Louis XIV, followed by Madame de Pompadour, the mistress of Louis XV. As you’re wandering through the U-shaped residence’s glitzy interiors, be sure to track down the stunning, intricately painted salon chinois (Chinese salon; pictured above) and the luxurious bathroom built for Madame de Pompadour. The castle looks onto two grand parterres that are decked out in ornate French gardens and water basins and bordered by a wilder wooded park. Upon arriving at the castle, you may recognize it from the big screen—its numerous movie credits include Stephen Frears’s Dangerous Liaisons and Sofia Coppola’s Marie Antoinette. 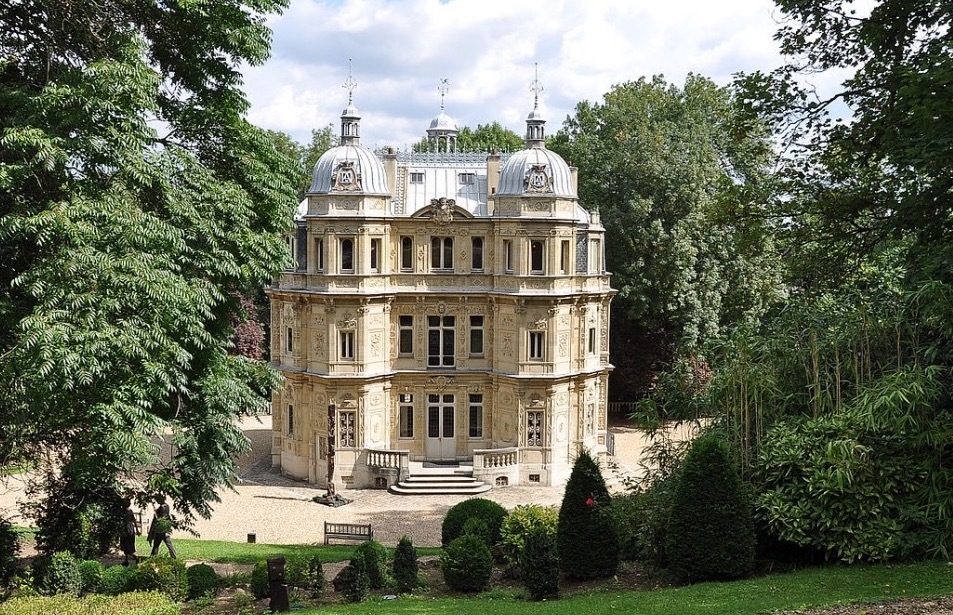 Slip into the imagination of one of France’s most popular writers at this whimsical castle built for Alexandre Dumas. Once his coffers were filled to the brim thanks to the success of his novels The Three Musketeers and The Count of Monte Cristo, Dumas embarked on a much different creative project: the construction of his dream home. Situated next to the Seine west of Paris, the elegant Renaissance-style jewel-box château is surrounded by a verdant park featuring grottoes, waterfalls, and a small neo-Gothic castle where the author would shut himself in to concentrate on his writing. A highlight of the interior is the enchanting Moorish Salon, inspired by an 1847 trip to Tunis.

For 320 pages of insider tips about vacationing in Paris, pack a copy of the Frommer's guide! Find where to buy it here.