A wall of color greets visitors who enter this magnificent chapel. Stained-glass windows make up a large part of the walls of the upper level of the church, giving worshippers the impression of standing inside a jewel-encrusted crystal goblet. What isn’t glass is elaborately carved and painted in gold leaf and rich colors: vaulting arches, delicate window casings, and an almost oriental wainscoting of arches and medallions. The 15 windows recount the story of the Bible, from Genesis to the Apocalypse, as well as the story of St-Louis, who was responsible for the chapel’s construction. Back in the early 13th century, Louis IX (who was later canonized) spent 2 years bargaining with Emperor Badouin II of Constantinople for some of the holiest relics in Christendom: the Crown of Thorns and a piece of the Holy Cross. The relics were finally purchased for a princely sum, and Louis decided that they should be housed in an appropriately splendid chapel in the royal palace (the relics are now in the treasury of Notre-Dame. The record is not clear, but the architect may have been the illustrious Pierre de Montreuil, who worked on the cathedrals of St-Denis and Notre-Dame. Whoever it was was a speed-demon; the chapel was built in record time for the Middle Ages, from 1241 to 1248. He was also quite brilliant; he managed to support the structure with arches and buttresses in such a way that the walls of the upper chapel are almost entirely glass. 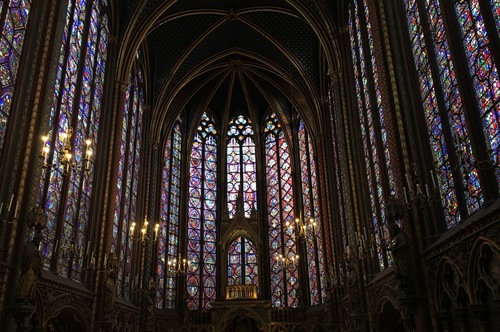 The lower chapel, which was meant for the servants, has a low, vaulted ceiling painted in blue and red and gold and covered with fleur-de-lis motifs. Up a small staircase is the upper chapel, clearly meant for the royals. This masterpiece suffered both fire and floods in the 17th century and was pillaged by zealous revolutionaries in the 18th. By the mid–19th century, the chapel was being used to store archives—2m (6 1/2 ft.) of the bottom of each window was removed to install shelves. Fortunately, renewed interest in medieval art staved off plans for Ste-Chapelle’s demolition, and eventually led to a conscientious restoration by a team that was advised by master restorer Viollet-le-Duc. The quality of the work on the windows is such that it is almost impossible to detect the difference between the original and the reconstructed stained glass (which makes up about one-third of what you see). 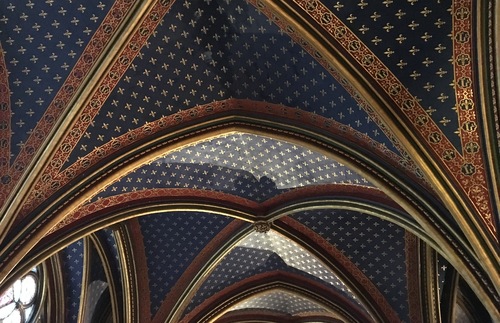 Vaulted ceiling of the Lower Chapel

Sainte-Chapelle stages evening concerts from March to November (tickets from 40€). And they’re very popular, so we recommend reserving in advance online at www.classictic.com.