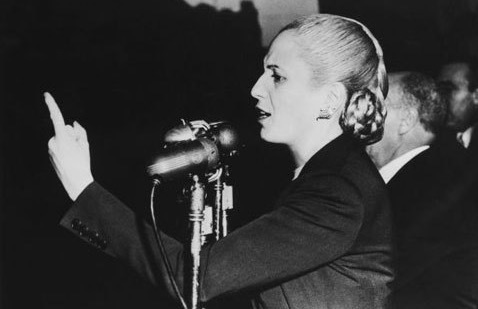 Eva María Duarte moved to Buenos Aires as a dirt-poor, 15-year-old aspiring actress, and by the time she died 18 years later—killed by cancer at 33—she had transformed not just the city but all of Argentina and, most indelibly, herself. Though she never held office, the second wife of obscure military man-turned-Argentine president Juan Perón deserves equal credit for winning the adulation of the masses and converting them to Peronism’s contradictory mishmash of far-left wealth redistribution, far-right fascism, and fishy finances.

Evita—saint of the slums, megawatt diva, or self-loving cynic, depending on whom you ask—generated a fame that has outshined and outlasted that of her husband or, for that matter, anybody else from Argentina. Pope Francis could maybe (maybe) give her a run for her money someday, but even he doesn’t have two 10-story steel portraits of himself on one of the capital’s tallest skyscrapers. And that’s not the only place where Evita’s presence looms large in Buenos Aires. Though she remains a divisive figure there, Eva Perón has a prominent connection to government buildings, historical sites, museums, and monuments throughout the city. Here are nine must-see spots with a touch of Evita’s star quality.

Photo: Eva Perón on the balcony of the Casa Rosada in Buenos Aires in 1951 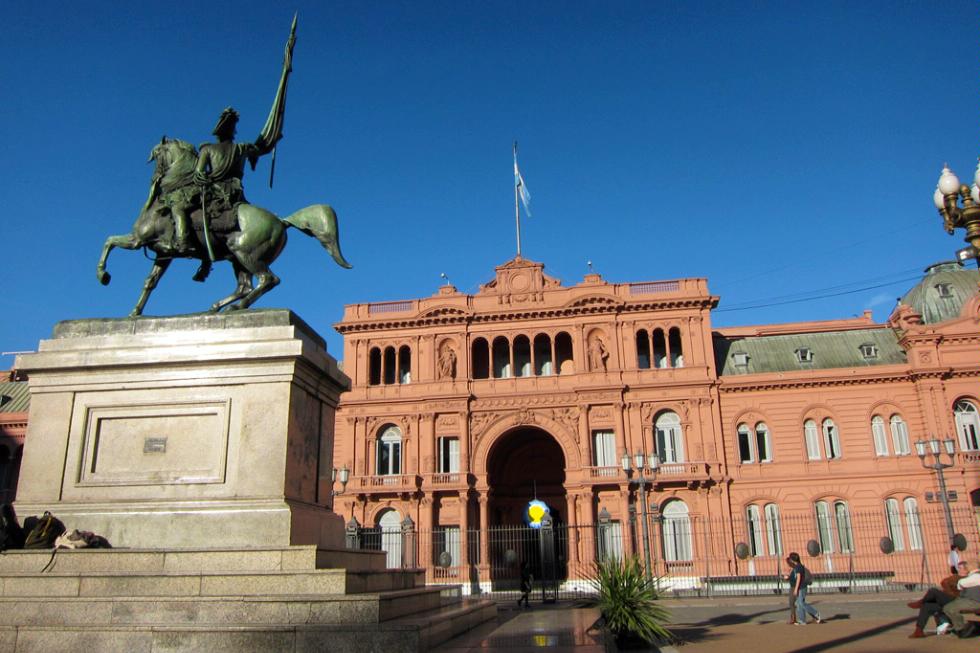 If your primary source of Evita intel is the 1978 musical by Tim Rice and Andrew Lloyd Webber or the plodding 1996 movie adaptation starring Madonna, we’re guessing that the first image that pops into your head when you hear the titular figure’s name involves upraised arms, an impassioned speech, and a balcony. Those of course are the basic elements of the show-stopping ballad “Don’t Cry for Me, Argentina,” set at the Casa Rosada, the pink-tinted presidential palace from which the Peróns really did address their devoted throngs in the late 1940s and early ‘50s. Dubbed descamisados (or “shirtless ones” to denote their extreme poverty), they gathered by the multitudes in the Plaza de Mayo to cheer for rabble-rousing speeches combining flattery, hectoring, and self-aggrandizement. The building is still used for government business today. Visitors can check out a museum filled with past presidents’ artifacts or, on the weekends, take a free guided tour. Yes, you may step out on the balcony. 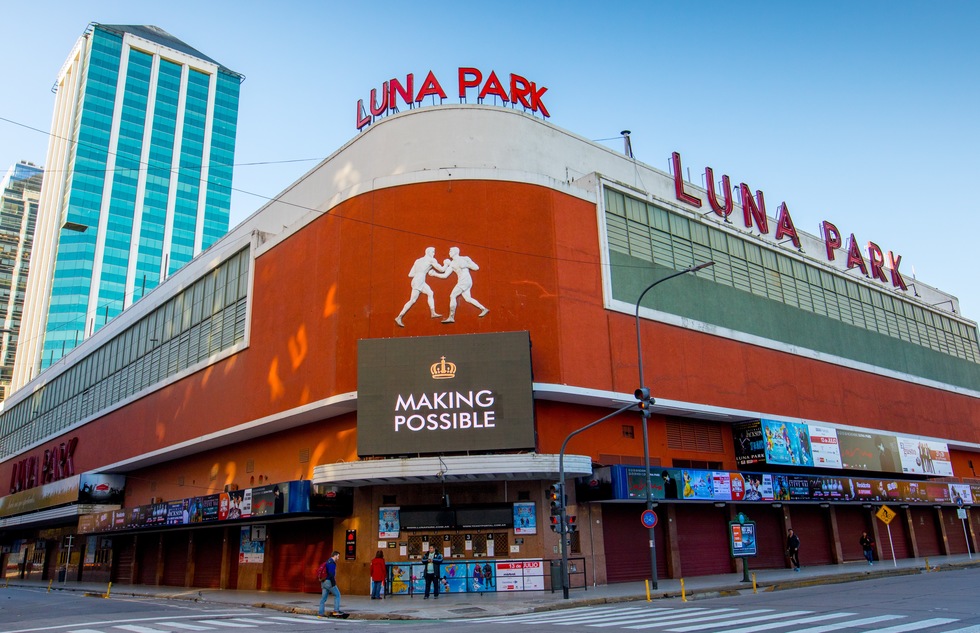 According to Peronist lore, Argentina’s largest indoor stadium was the place where Juan and Eva first laid eyes on one another. It was 1944 and both were taking part in a charity event to benefit victims of a devastating earthquake in the western province of San Juan. He was an ambitious general on the rise, she was an ambitious actress on the make, and the rest is history. Or maybe myth—it’s now believed that the pair had already met by then. It’s true, however, that Peron’s prominent role in the earthquake relief effort was pivotal in endearing him to the country (though the rebuilding slowed to a crawl after he was elected president in 1946). Once known mostly for boxing matches, Luna Park is now a showcase for a wide range of concerts by classical orchestras, Latin American acts, and international pop stars. 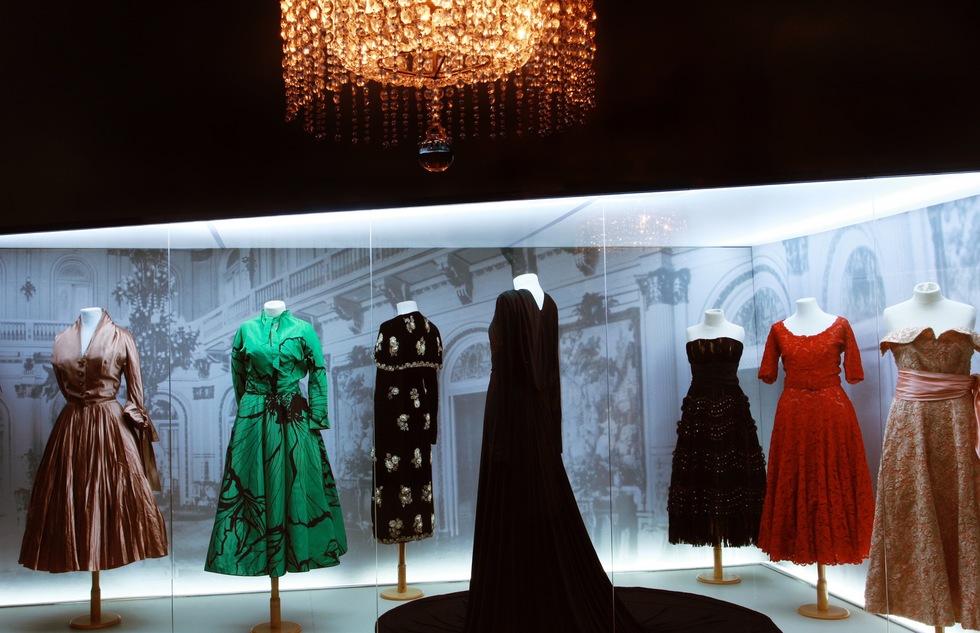 Evita’s skill at connecting with the poor went hand-in-hand with her great talent for irking the wealthy. A case in point: her decision to turn an Italian renaissance mansion in a then-ritzy corner of the Palermo neighborhood into a home for single mothers from the sticks. Those women were evicted following Juan Perón’s ouster from office in 1955, but in 2002, the building reopened as the Museo Evita. Using photos, newsreels, memorabilia, and personal artifacts (including fashions, pictured above), the permanent exhibit tells the story in chronological order of Evita’s rise from humble beginnings, her work on behalf of the poor and women, her famous “Rainbow Tour” of Europe in 1947, and her eventual sickness and early death.

Meanwhile, deserved criticisms of the Peróns—that they were financially reckless, intolerant of dissent, comfortable with fascists, and responsible at least in part for setting the stage for the violent disorder that followed them—get short shrift at the museum. An uninformed visitor might leave with the impression that Evita was a kind of South American Princess Di: a snappy dresser with a soft spot for the downtrodden. We recommend maintaining a degree of skepticism. 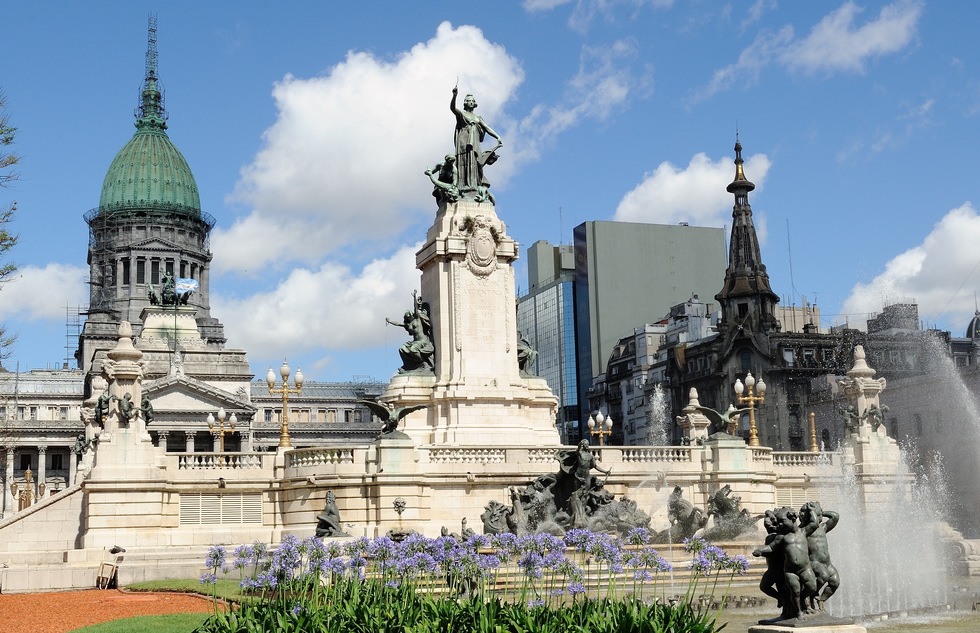 The closest Eva Perón ever came to holding office was her thwarted bid to serve as her husband’s vice president in the 1952 election—bowing to pressure from the military and Juan himself, she eventually withdrew from the running. She was, however, a strong supporter of the first female politicians who entered Argentina’s national legislature after women won the right to vote in 1947. In the imposing, dome-capped Congreso building, she oversaw the design of the Salón Rosado (now called the Salón Eva Perón), a meeting space where women could discuss important issues without male interference. Adorned with Pepto-Bismol-pink walls, curtains, and upholstery as well as a gold bust of Evita, the room is a stop on the free guided tour of the Congreso offered in Spanish and English on weekdays. You’ll also see the central rotunda where her body lay for two weeks after her death so that her many followers could pay their respects. 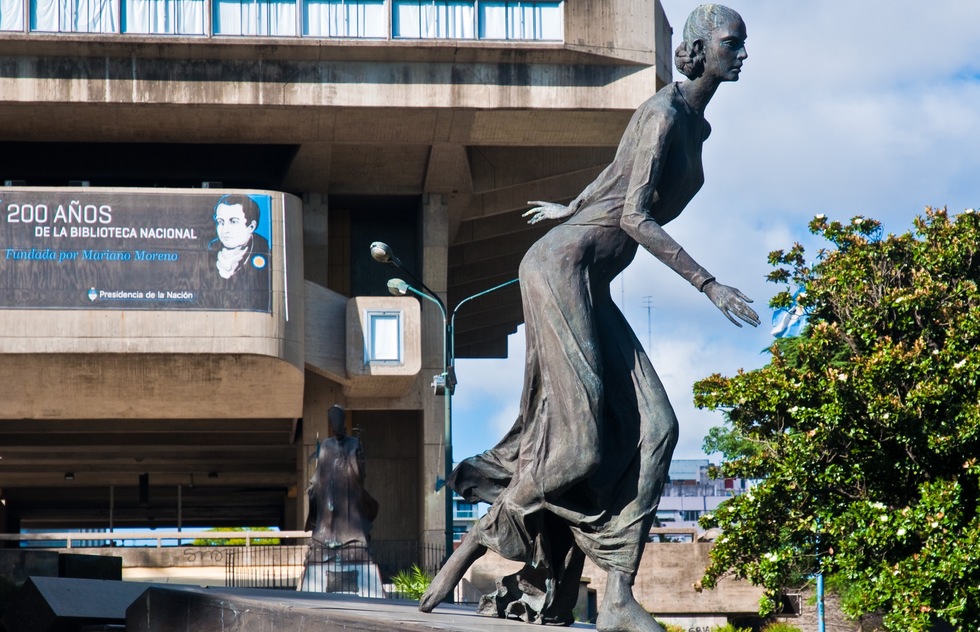 Argentina’s presidents don’t live in the Casa Rosada; they just work there. While the Peróns were in power, their residence was in the genteel Recoleta neighborhood, on a site now occupied by the Brutalist, top-heavy National Library. After Perón was overthrown in a military coup in 1955 (three years after Evita’s death), the new regime had the couple’s home demolished as part of an effort to eradicate all traces of Peronism. It was only in 1999—following decades of disorder and dictatorship—that an official monument was erected to commemorate Evita in the park next to the library. The large bronze statue eschews glamour, depicting Evita striding forward while barefoot, as befits a woman of the people. 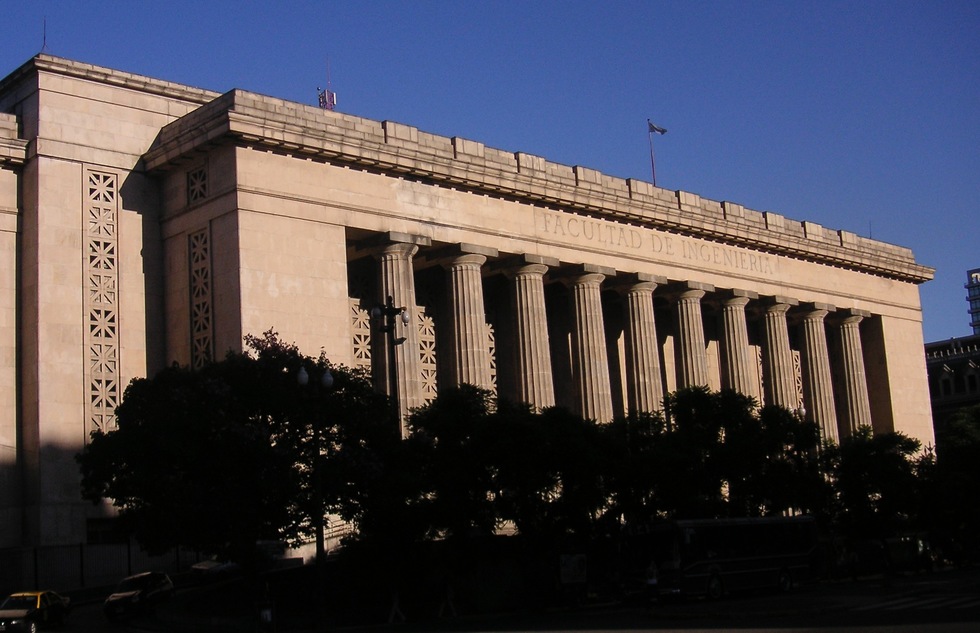 One of the few Evita-related buildings allowed to remain standing after Juan Perón was exiled is this columned hulk along Paseo Colón on the east side of the city. It was once the headquarters of the Eva Perón Foundation, a charity established by the first lady to help underprivileged families—or, according to critics, fill her own pockets. Now used by the engineering department of the University of Buenos Aires, the building bears almost no signs of its former purpose, aside from a plaque in the lobby. Pop in for a quick look if you want, but to avoid disturbing faculty and students, it’s probably best to settle for a snapshot of the grand facade. 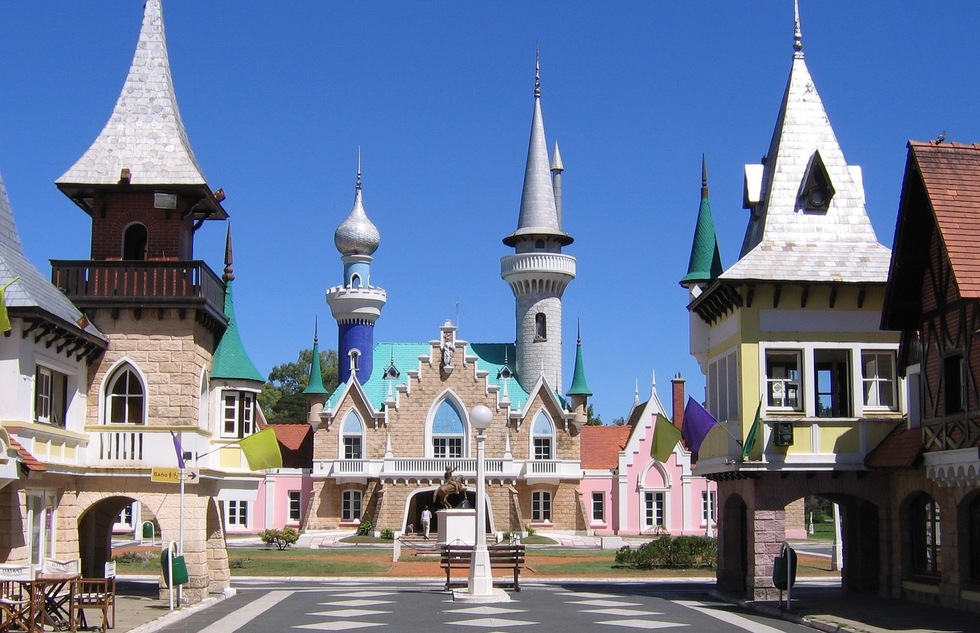 Another of Evita’s pet projects was this educational amusement park just outside La Plata, located about an hour southeast of Buenos Aires by car. A “republic of children” (the name’s English translation), the place is supposed to inspire civic participation in youngsters via pint-size models of all the institutions that make up a city: courthouse, legislature, train station, restaurants, and so on. Architectural styles range from storybook whimsy to scaled-down replicas of famous buildings like the Taj Mahal. There are also occasional shows, playgrounds, and a lake with islands that can be reached by boat. Legend has it that Walt Disney’s visit to the park sometime around its opening in 1951 inspired him to create Disneyland—but good luck finding any sort of evidence that the man behind the Mouse actually set foot on the grounds. 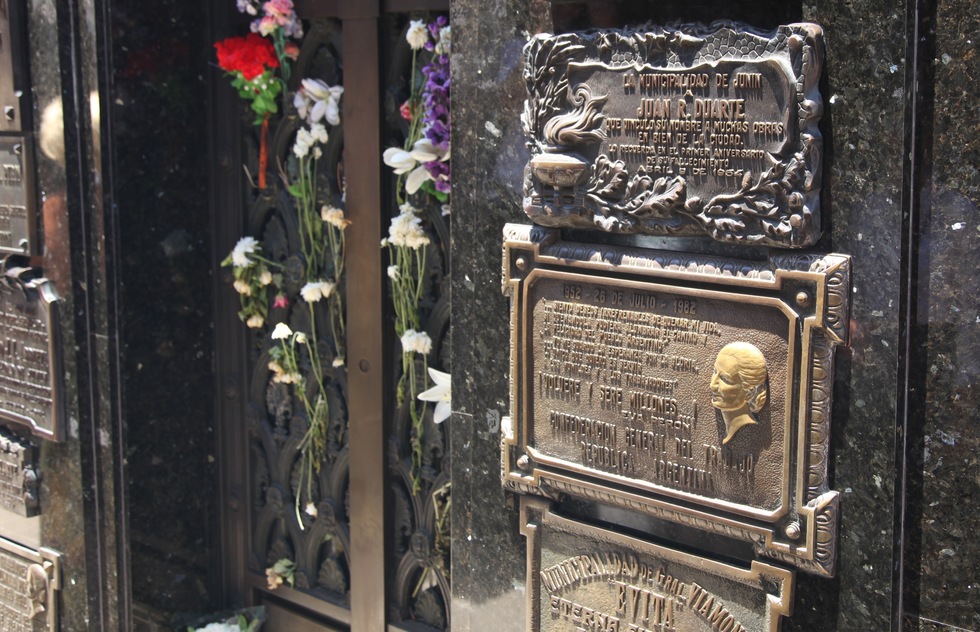 Most people slow down after they die, but Evita has had a remarkably active afterlife. In response to her death from cervical cancer in 1952, a lavish outpouring of grief clogged the streets of Buenos Aires with truckloads of flowers and millions of mourners lamenting the loss of their “Santa Evita.” Her embalmed corpse was put on display at the Confederación General del Trabajo building for about two years until Juan Perón was kicked out of office and sent into exile. For the better part of the next two decades, Evita’s body was schlepped to Italy, Spain, and who knows where else, while Argentina’s military leaders tried to make the population forget the Peróns ever existed. It didn’t work—Perón returned to office in 1973 (though he died the next year). As for Evita’s remains, they were finally interred in, of all places, the tomb of her father’s family in Recoleta Cemetery, the city’s elegant necropolis containing the very oligarchs the Peróns had despised. Nothing is ever simple with Evita. 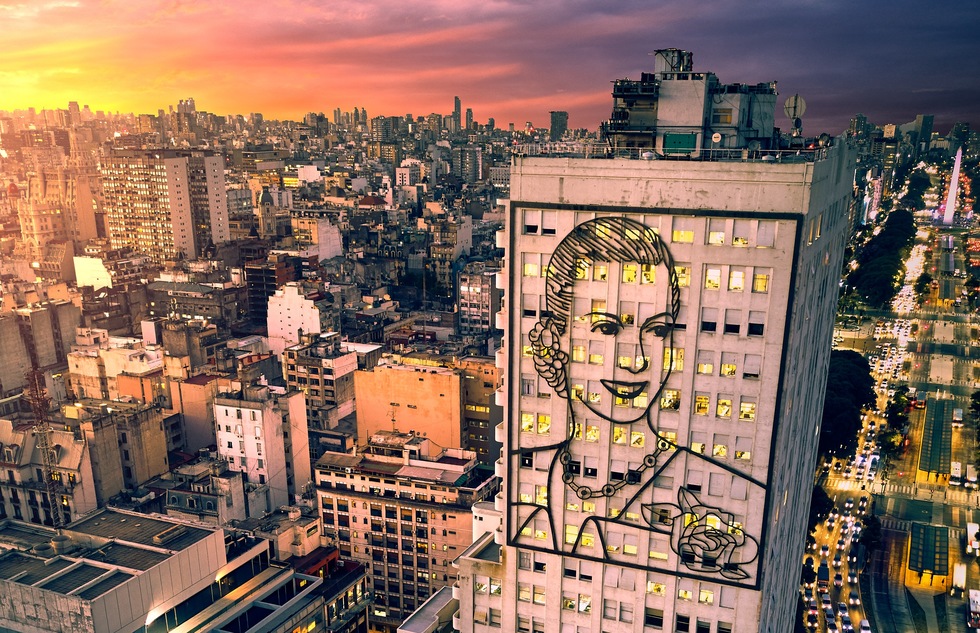 Deensel [CC BY 2.0], via Wikimedia Commons
Ministry of Health

The curious way that Evita’s life and legacy resist straightforward interpretation is reflected in the huge monument added in her honor to the facade of the Ministry of Health on Avenida 9 de Julio in 2011. On both the north and south sides of the building there are 10-story steel portraits of Evita’s face—smiling benevolently to the south, and, to the north, shouting into a microphone as if inciting the masses or condemning the privileged. An outsized and divided portrait feels especially appropriate for Evita, an outsized and divisive personality who isn’t likely to stop sparking controversy and fascination anytime soon.