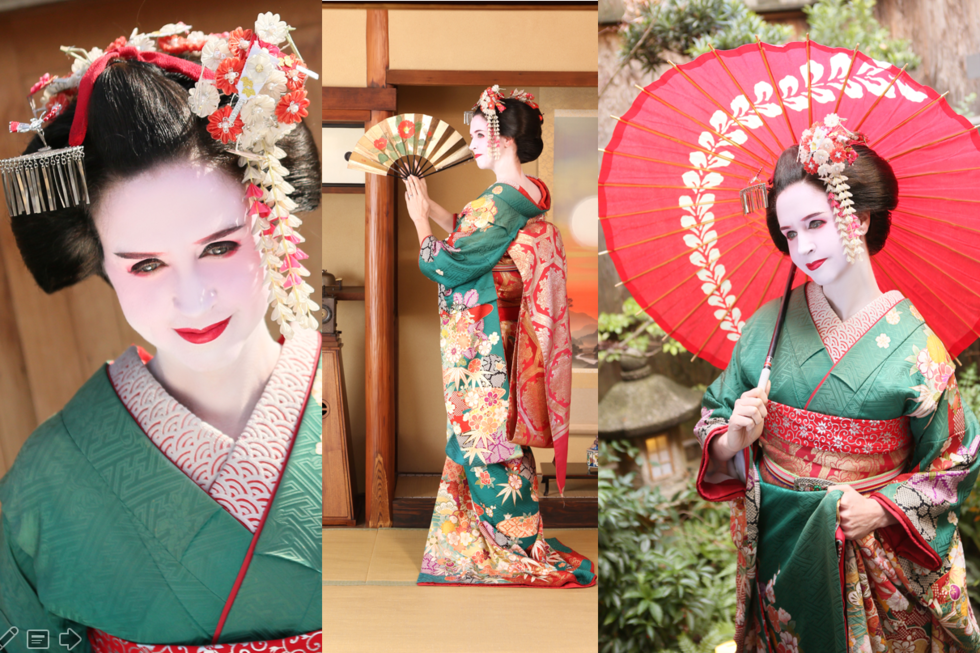 In Japan, I Was Transformed Into a Geisha. You Can Do It, Too

Geisha have fascinated the world with their ethereal blend of beauty and mystique. That porcelain-white face. Those ruby-red lips. The colorful kimono. The jet-black hair. Although the book-turned-movie Memoirs of a Geisha helped to pull back the curtain on Japan's long tradition, for most people, myself included, geisha images on advertisements and as costumes are where understanding typically begins and ends. On recent trip to Kyoto, however, I got a personal experience with one particular geisha—I transformed into one. Here’s how you can do the same. 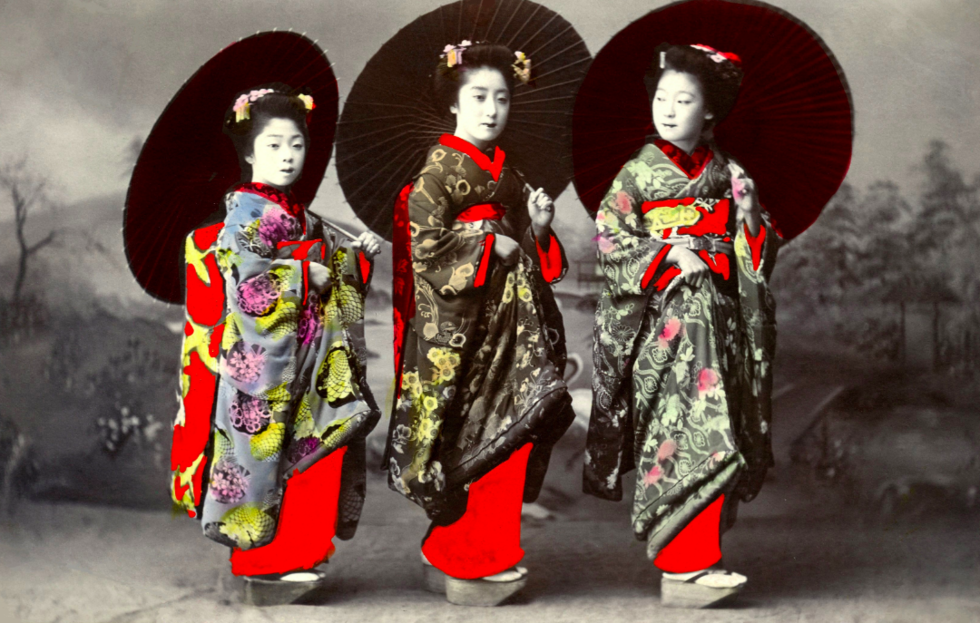 First, a little context on the women behind the image. Geisha (the word translates to “performing artist”) have been around since as early as 600 A.D., rising to prominence in the 17th century as high-end entertainers, mostly of men. The women are meticulously trained, some starting as early as age 15, in the art of dance, music, hosting, and conversation, refining personal skills that weave entertainment, hospitality, and allure. The geisha are not prostitutes, a common misconception, and the legitimate ones do not get physically intimate with their gentleman patrons. Rather, they are escorts in the purest sense of the word, savvy in the art of making their hosts feel like stars, the center of the universe, the only man in the room—and they get paid very well to do so. Some geisha today can command nearly US$1,000 for dinner accompaniment. 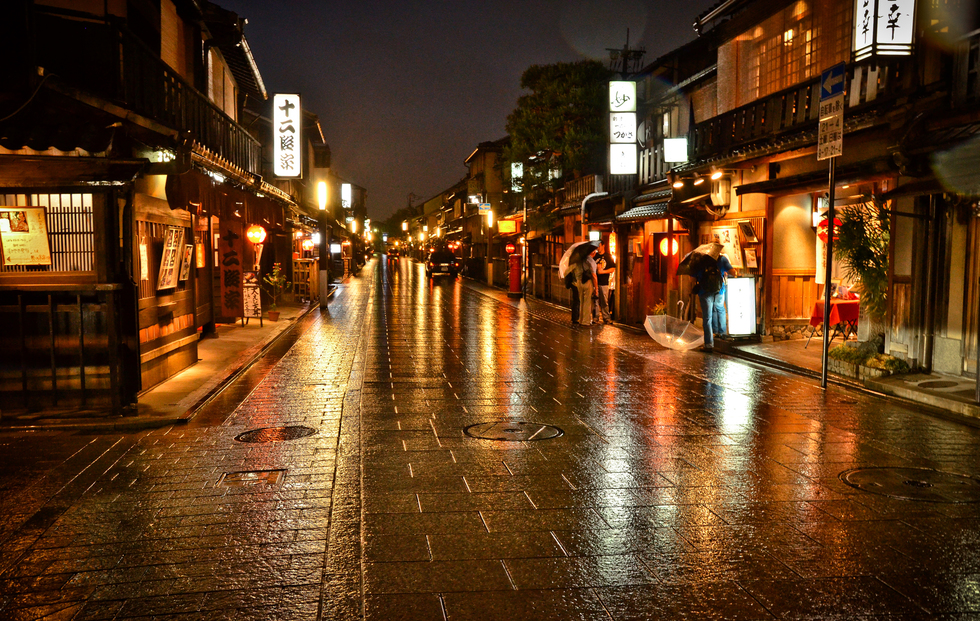 The heart of the geisha culture is in Kyoto, a historic city about 2.5 hours from Tokyo by high-speed train. Geisha and maiko (apprentice geisha) are concentrated in the Gion district, an intimate maze of narrow lanes lined with traditional wooden homes, temples, restaurants, and teahouses (ochaya). Meeting a geisha typically requires a referral, which is not easy (or cheap) to coordinate. While travelers might catch a glimpse of one scurrying along the streets from appointment to appointment, especially in the evening, don’t expect them to stop and take a picture with you. They’re on the clock. 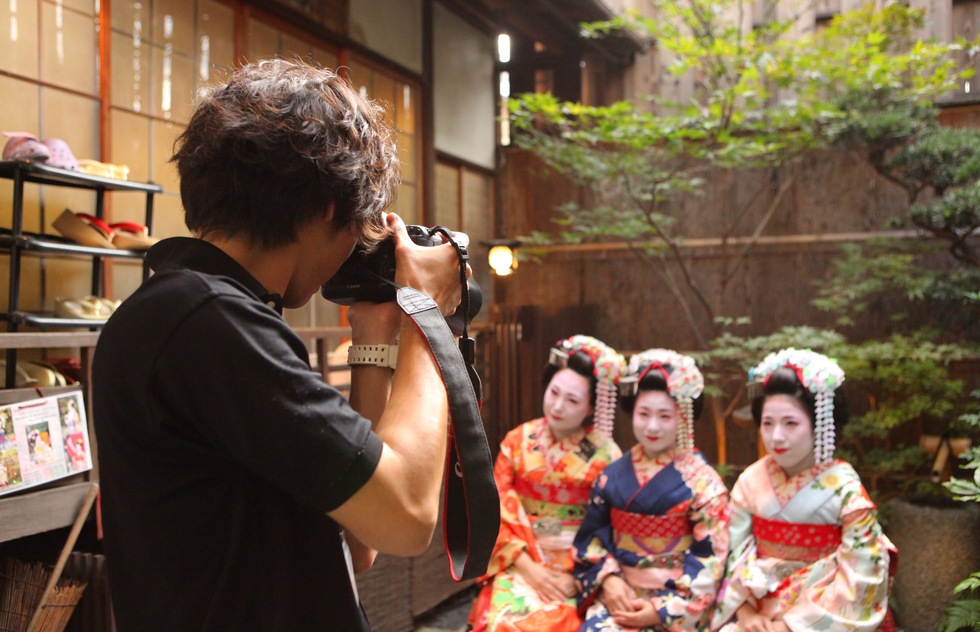 There are plenty of shops fringing the Gion district that rent kimonos for those who wish to stroll in traditional dress—and many tourists, including Japanese ones, do just that. But AYA Maiko Makeover provides a more robust, guided version: a geisha-inspired makeover from head to toe (makeup, hair, kimono), followed a professional photoshoot. Although you don’t meet and mingle with actual geisha, you do get first-hand experience transforming into that persona. I made my reservation a few months in advance of my travels (don't wait until you get to Kyoto) and was confirmed via email a few days later. No upfront payment was required. The email reply: “We get payment when we give you the photo albums. Either cash or credit card.” Such trust. I chalked it up to a Japanese code of honor that is unfortunately rarely found in merchants in the West. 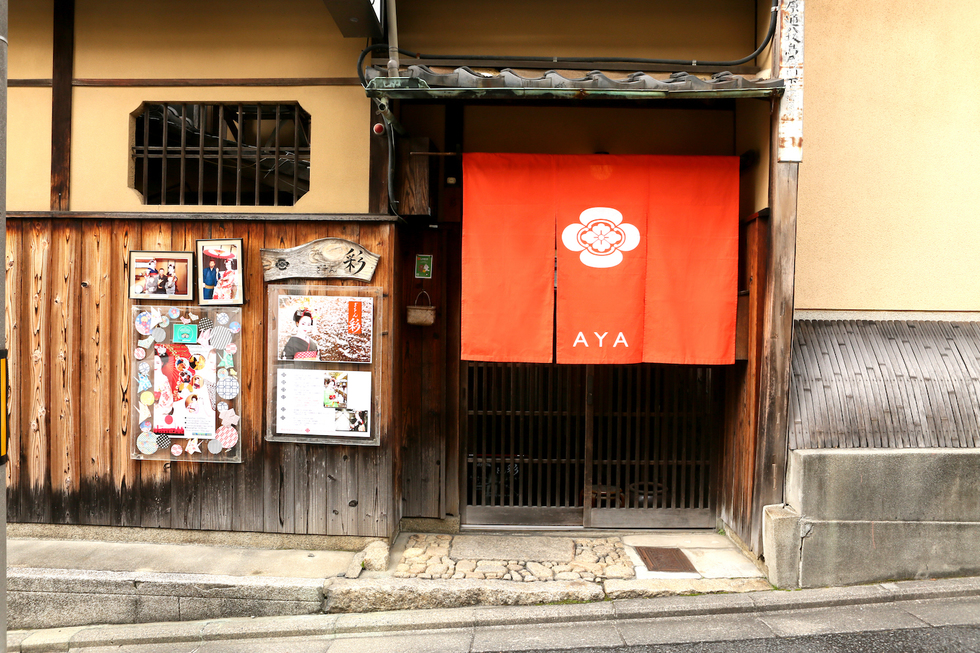 The experience, fittingly, takes place in a 100-year-old machiya townhouse that once served as a teahouse where maiko performed. Upon arriving and exchanging my sneakers for provided house slippers, a common custom in Japan, a female attendant re-confirmed my package. Options (which are only offered to women—sorry, no men) range from ¥12,420 (around US$112) to ¥31,860 (around US$285), depending on how extensive the photoshoot is. You can choose between becoming a geisha or a maiko (an apprentice geisha). The maiko purposely appear more youthful—hair topped with ornate flower pins that dangle—which was a look that appealed to someone like me, desperately trying to hide my greys. No brainer: Bring on the youth, make me a maiko. With those choices made, it was off to the makeup chair for 40 minutes. 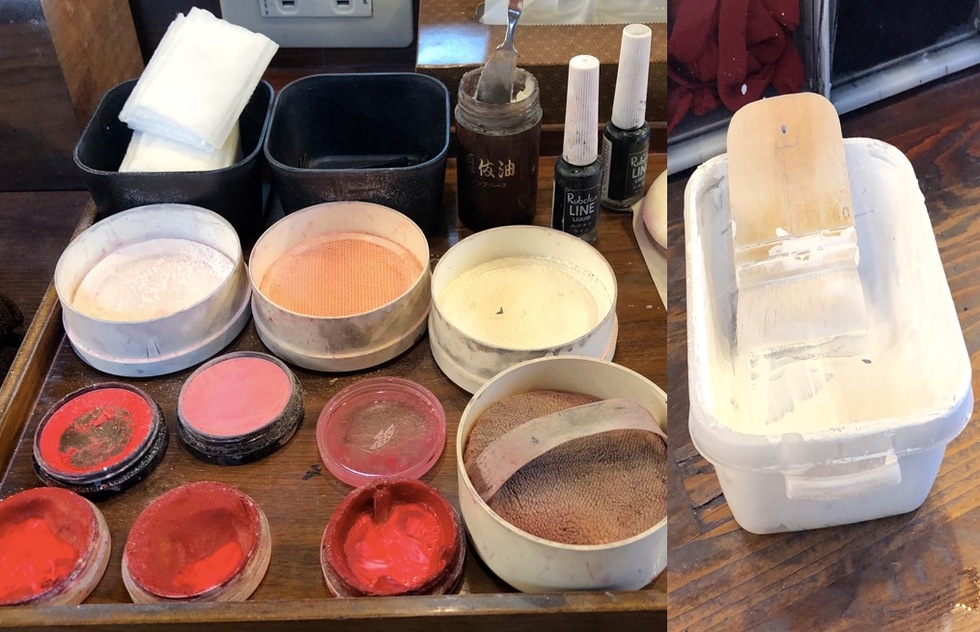 Erica Bray
Tools of the trade

As I sat down in the makeup chair, I couldn’t help but notice that the brush for applying the iconic white base layer looked more like a paint brush. While AYA promises its makeup is natural and gentle for sensitive skin, you do have the option to do without the white layer. But why do that? It’s one of the most prominent features of the geisha. It's also purposeful; geisha painted their faces white so that their facial expressions would be clearly visible while dancing, singing, and entertaining—a legacy going back to a time when candles were the only way to light a room. 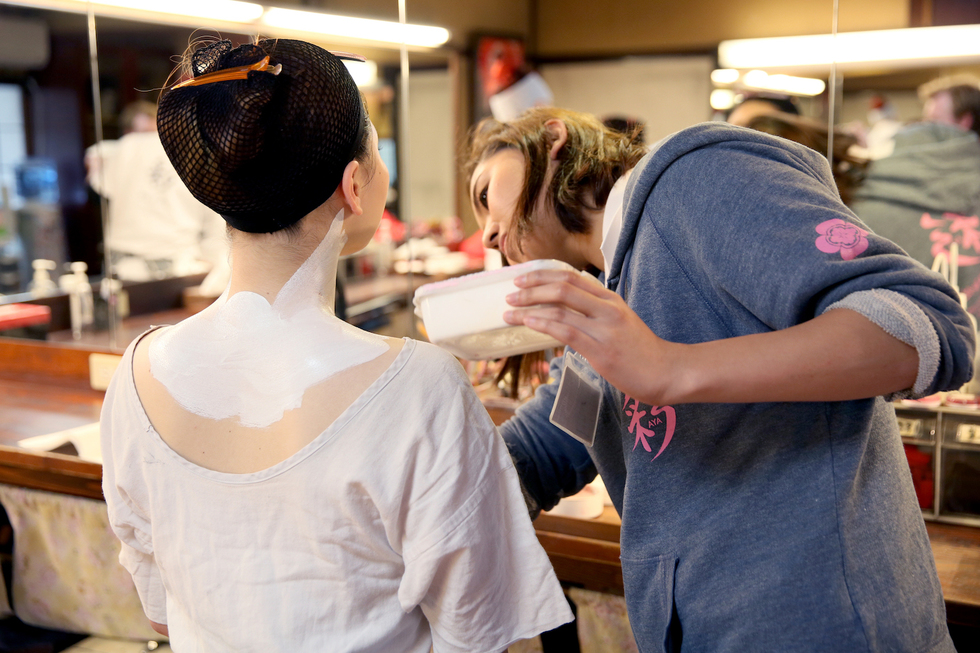 My soft-spoken makeup artist had just one question: “You want cute or elegant?” Easy answer: “Cute.” With that simple instruction, she meticulously applied the white base to my face, neck, and back of the neck, leaving a thin area at the hairline and behind the neck exposed—an intentional reminder to onlookers that geishas wear a mask. Geisha considered the nape to be one of the sexiest parts of a woman’s body, so that area, too, was painted and would remain prominently and tantalizingly displayed. 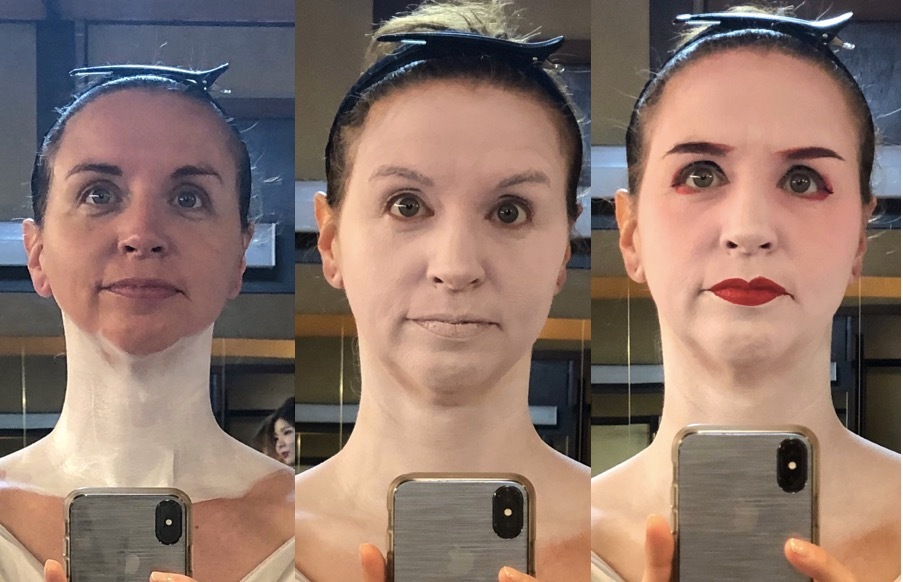 Oh, the magic of makeup. The transformation is astounding. In a matter of minutes, my face was no longer my own. I was feeling more like an apprentice geisha. Not unlike an actor stepping into character, I quickly discovered that makeup is the key to stepping into the character of this “performing artist.” 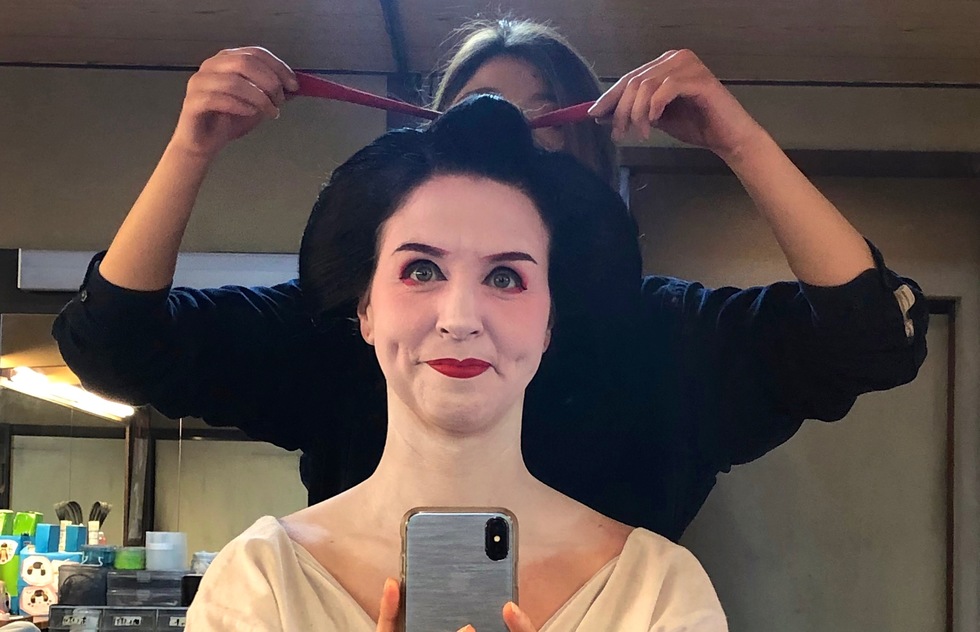 Next up: hair. With my own long hair pulled into tight netting, a jet-black wig was carefully affixed to my head. The attendant then strategically sewed it—yes, sewed it—into the netting to secure it firmly in place. The parts of my natural hair that were still exposed were matched to the wig with a jet-black spray. The final touch was a cute red bow. My hair, both fake and real, sat heavy atop my head. I could tell that walking with the giant assemblage on my head would be a comical balancing act. The geisha are known for their grace, but that was going to be a challenge. 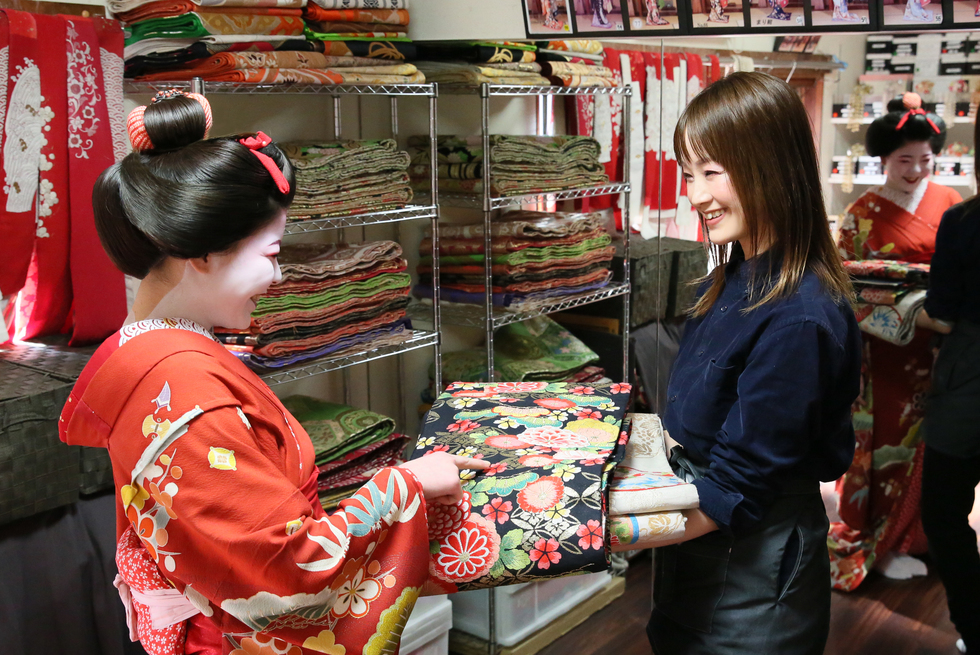 Next, I was escorted to the kimono room to select my clothing and hair ornaments. AYA says its kimonos, which are 100 percent silk, are “free sized” but recommend alerting them in advance if your bust measurements are more than 110 cm (43 inches) or hip measurements are greater than 120 cm (47 inches). As a nearly six-foot-tall woman, I thought the emerald green kimono I chose was longer than necessary, and I also wasn’t prepared for the way the attendant elaborately tied and bound it to my torso. It was a meticulous process of more than a dozen steps. After she tightened me into my kimono with a final red-and-gold obi (sash), I couldn’t imagine singing or dancing like a geisha. How do they do it? Ah, yes: years of training. 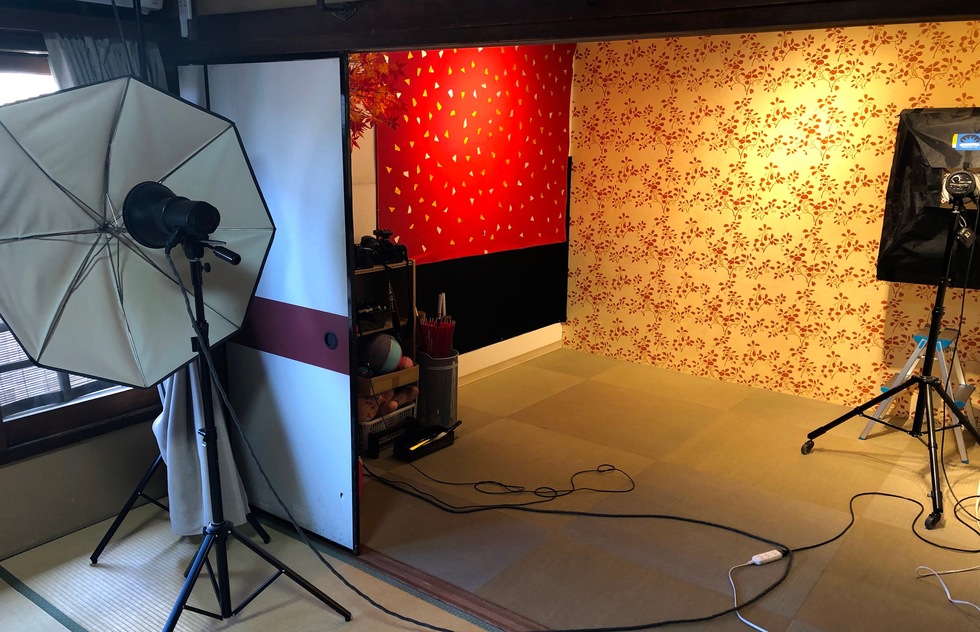 After that, a professional photographer spends time documenting the dramatic end result. Depending on the package, you have the option of being pictured in a traditional tatami room, in a courtyard garden, or around the streets of Gion. I got precise direction so that my grace and beauty would be captured for posterity, but it was the moments in between the posing and smiling that were the most memorable. Hobbling around in tiny wooden sandals. Trying not to bump my massive wig into the door frame (which happened several times). Simply breathing in my kimono. Now that I had visually transformed into an apprentice geisha, actually maneuvering like one was an eye-opening challenge. 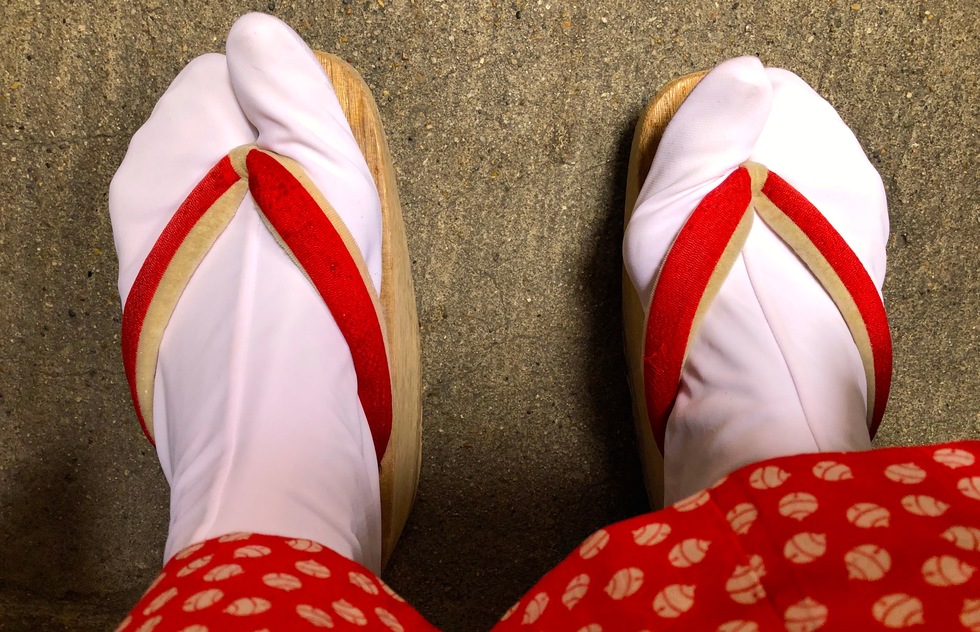 My package gave me 30 minutes of “free time” to explore Gion without the photography team. You can wander the nearby Yasaka Shrine and Kodaiji Temple, fully embodying the geisha in her natural setting. As a solitary, six-foot-tall apprentice geisha struggling to walk in tiny wooden sandals, however, I became a comedic curiosity. Because I couldn’t walk with any speed, I was easy prey for a paparazzi of camera phones. I'm certain that I'm on Instagram feeds around the world now. The real geisha of Kyoto famously do a much better job of avoiding tourists. 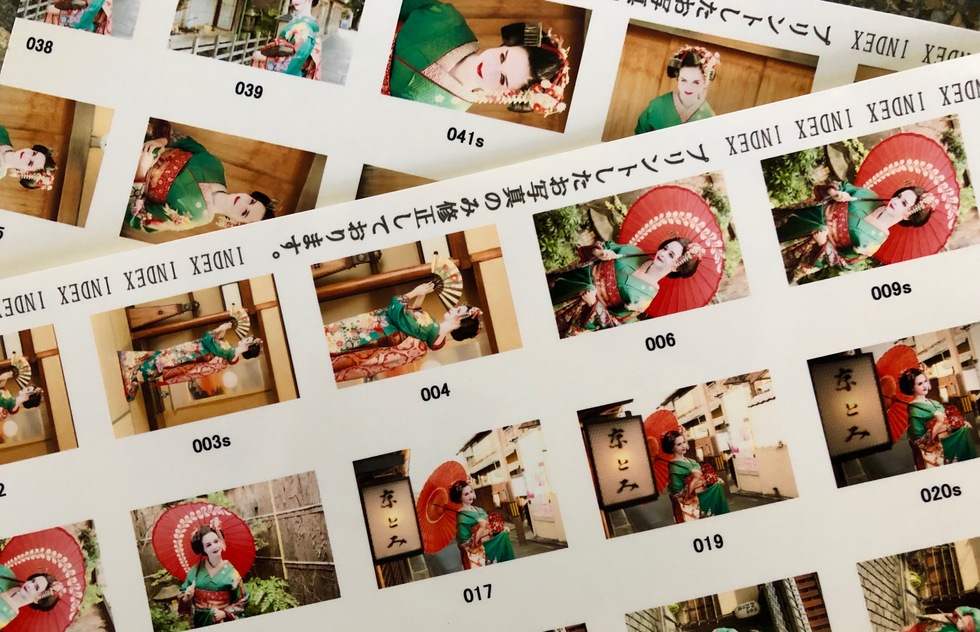 I was blown away by how lovely the photos turned out to be. That was me under all that makeup and hair? While I do wish that this experience could have included a chance to meet a former geisha, superficially transforming into one was fun and it elevated my respect for these special women. The effort that goes into achieving the look alone is astounding, and then there are the many years of education—all while tightly bound into a kimono, teetering on wooden sandals, and wearing heavy makeup and wigs. For those considering doing this in Japan, a few tips: book early; be prepared to communicate with minimal shared English words (miming goes a long way); and bring plenty of face wash and shampoo for afterward, because you'll keep finding white remnants after it's over. Un-becoming a geisha, as it turned out, was just as painstaking as becoming one.