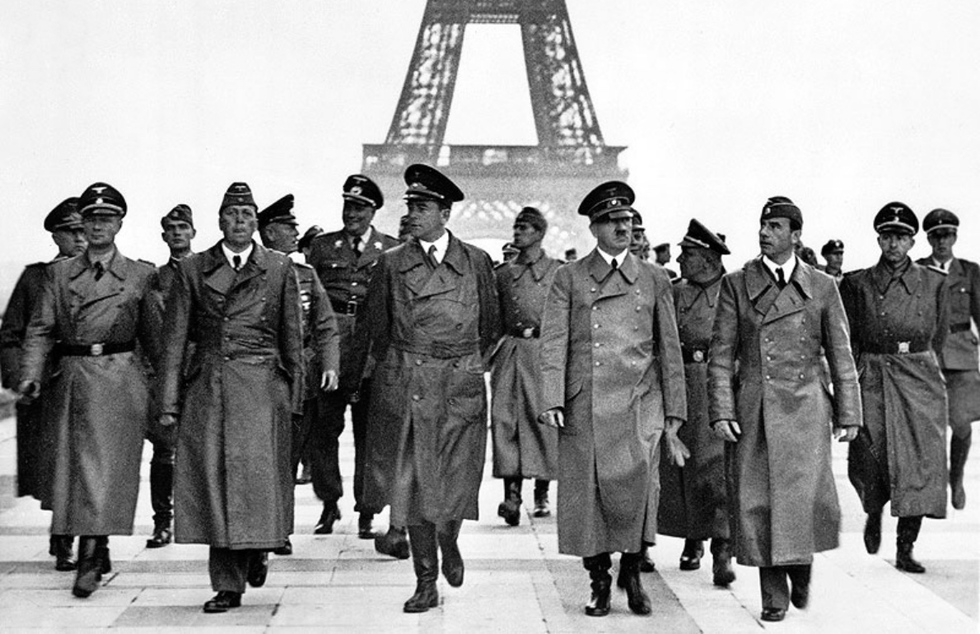 By Lily Heise
June 6th marks the anniversary of D-Day—in 2019, the 75th one—but this epic military victory was just the beginning of the liberation of France. It would take two and a half more months, until August 24, 1944, before Paris would be freed from its four years of Nazi Occupation. The memory of these four dark years of suppression, deportations, and plundering, as well as the scars of the battle to liberate the capital, can be observed at various sites, both famous and lesser known, around the city. Here's where to go to find the ghosts of World War Two in Paris. 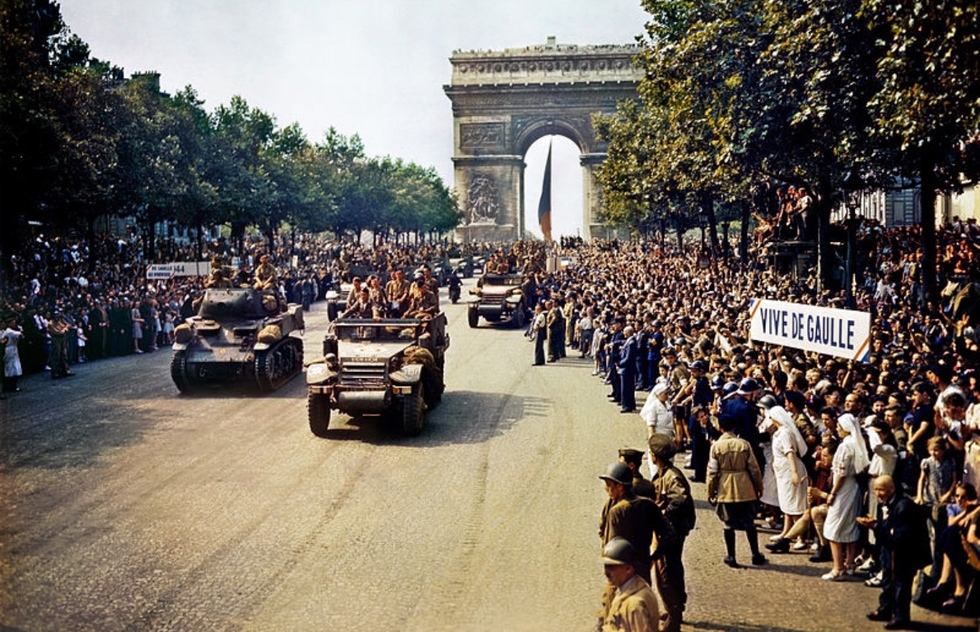 © Jack Downey, U.S. Office of War Information / CC
Avenue des Champs-Elysées
After the "Phoney War," the calm period between the invasion of Poland and May 1940, the Nazis swooped on France, deftly invading and defeating the country within seven weeks. When they arrived in the capital on June 14, the victors wasted no time in laying claim to the city’s world-famous avenue. A military parade and marching bands descended on Les Champs-Elysées, hanging a swastika flag from the Arc de Triomphe. Two weeks later, Hitler proudly drove down the avenue on his grand tour of Paris, his only wartime visit there. One of the city’s main entertainment centers, its cafés were popular with the occupying forces, and Le Normandie movie theater, still in existence, is an example of the many establishments around the city that were reserved exclusively for German soldiers. The French eventually seized back the avenue with their own victory parade starring General Charles de Gaulle and French and American forces, on the day after the city’s liberation, August 26, 1944. Today, a statue of the triumphantly marching de Gaulle stands guard over the avenue, in front of the Grand Palais. 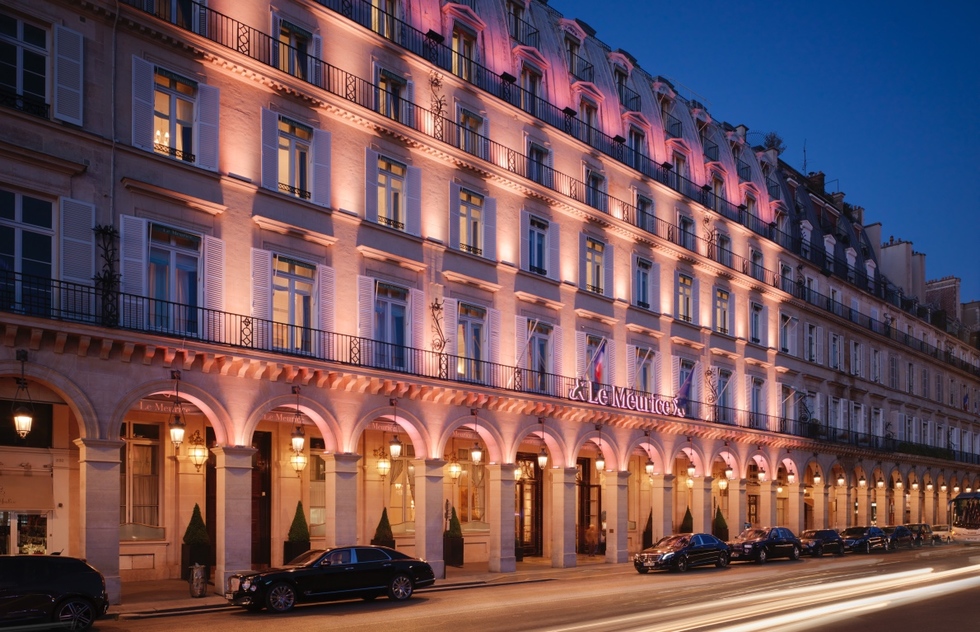 Many of Paris’s luxury hotels were requisitioned by the Nazis, and the elegant Le Meurice was repurposed into the headquarters of the German occupation of "Gross Paris" (greater Paris). On August 7, 1944, as the war's endgame was beginning, a new military governor of Paris, General Dietrich von Choltitz, moved in. Specifically chosen for his track record of rigid obedience, he was on strict instruction from Hitler to destroy the city rather than let it fall into the hands of the Allies. However, a few weeks later, the famous question Hitler asked von Choltitz, “Is Paris Burning?”, would not receive an affirmative answer. The story (which is disputed) goes that during meetings at Le Meurice, the Swedish consul-general in Paris, Raoul Nordling, helped convince von Choltitz to defy the Fuhrer's orders and spare Paris. No matter what transpired at that meeting, on August 25 the hotel was stormed by the French Free Forces, to whom von Choltitz surrendered—a bullet hole next to the “M” above the main door is a more definite testament to that event. 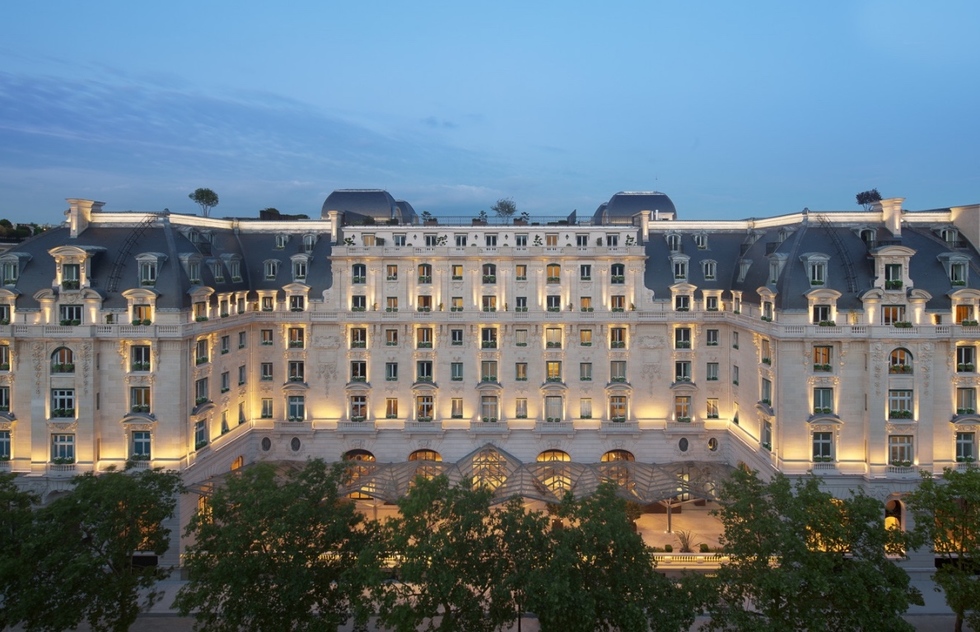 Another strategic Nazi position in Paris, the Belle Époque-era Hotel Majestic had been sold to the French government in 1936 and converted into offices for the Ministry of Defense. It’s thus not surprising that the German military high command decided to make it their headquarters. It was here where deportation orders against Parisian Jews were processed. However, not everyone in the upper echelons of the German military agreed with the radical policies of the Fuhrer. Among the dissidents was Carl-Heinrich von Stülpnagel, the military commander of German-occupied France, who helped design, from his second floor office of the building, the failed July 20, 1944, assassination plot against Hitler. After the war, the building became the first headquarters of UNESCO, and it was also where the Paris Peace Accords were signed in 1973, marking the official end of the Vietnam War. In 2014, it returned to its original purpose as a hotel as part of the Peninsula brand. 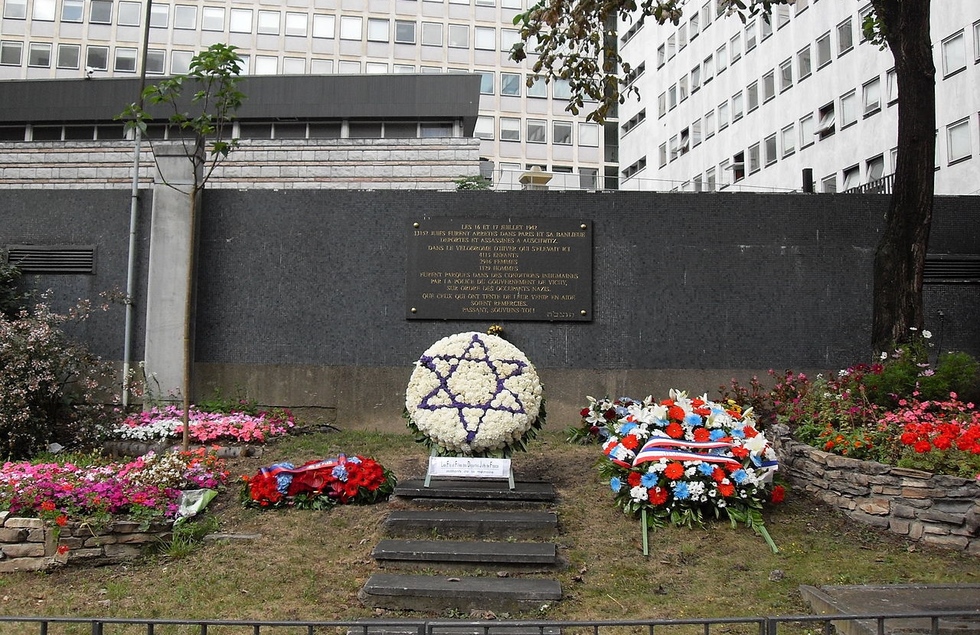 With rations, reduced access to transportation, and curfews, life was not easy for Parisians during the Occupation, and even less so for its Jewish residents, who were forced to wear the yellow Star of David and were banned from certain professions and public places. While some individual deportations to concentration camps began in 1940, it was from 1941 onward that group roundups began. Over the course of the Occupation, 76,000 of France’s 330,000 Jews were deported—and only approximately 2,500 survivors returned. The darkest episode of Nazi deportations in France took place on July 16 and 17, 1942 when 13,152 Jews were rounded up and deported to Auschwitz. Of these, 8,160, including 4,115 children, were first taken to the Vél’ d’Hiv, the Vélodrome d'Hiver, an indoor bicycle racing cycle track and stadium located near the Eiffel Tower. They were held in the venue for five days with little food and water and no sanitary facilities.

The complex was eventually demolished in 1959, and today a square and a memorial garden in the vicinity pay tribute to victims of the atrocity. Further commemorative plaques for the Vél’ d’Hiv roundup and other deportations can be found throughout Paris, particularly on buildings throughout the Marais district, the historic center of the Jewish community. One of these is on the school at 8 rue des Hospitalières Saint-Gervais, which had 260 students deported during the war, including 165 during the Vél d’Hiv roundup. 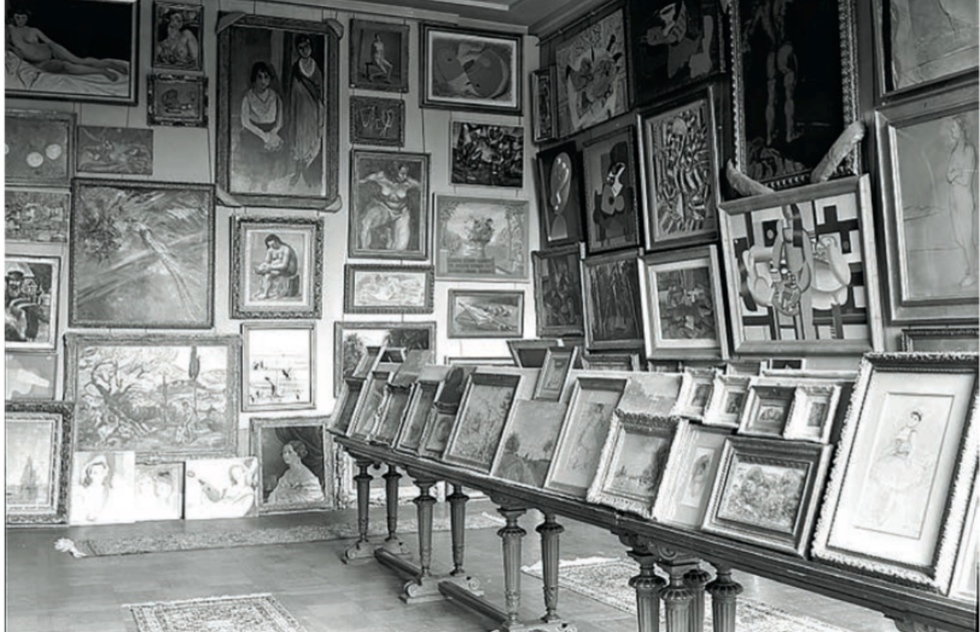 Jacques Jaujard, the director of the French Musées Nationaux, had the foresight to evacuate the greatest treasures of the Louvre at the outbreak of the war in August 1939 (one hiding place, a castle in the Loire Valley, is now a hotel). But some 100,000 privately owned works of art remained vulnerable. Some Jewish collectors managed to get their art out in time, but due to a new law, anyone who left France just before the war was stripped of their French nationality, and their possessions could be seized. Confiscated art ended up in the Jeu de Paume, a former tennis court on the Place de la Concorde that was used for temporary exhibits of the Louvre. It became something of an art supermarket where top ranking Nazi officials could help themselves to precious masterpieces. Hermann Göring, the head of the Luftwaffe, was particularly zealous, and on his several visits to the gallery he had more than 1,300 artworks shipped back to his residence in Germany. Luckily, the trafficking of this stolen art was secretly recorded by a Jeu de Paume curator, Rose Valland, whose assiduous work, along with those of the famous Monuments Men, helped bring 60,000 works back to France. Be that as it may, fewer than half of the missing works returned to their rightful owners. 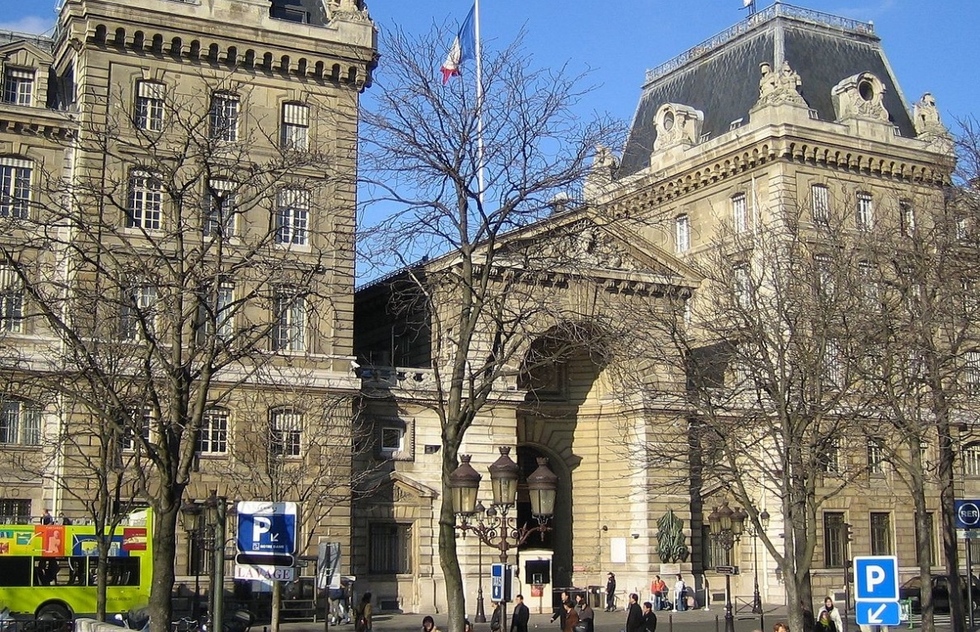 During the Occupation, the Prefecture de Police had a special squad which collaborated with the Germans by tracking Jews, communists, and members of the Resistance. But with the news of the continued Allied victories in Normandy in 1944, Parisians made it a target of a newly emboldened rebellion. On August 15, an uprising began with a general strike by Métro employees, the police, and the Gendarmerie military police. This social movement was joined by other workers in the following days. On August 19, their revolt accelerated with the armed insurrection of the French Forces of the Interior (FFI). Despite being poorly equipped, they managed to gain control of the Prefecture de Police that same day, assisted by members of the French police themselves. The major victory of capturing the Prefecture persuaded General Eisenhower to allow General Leclerc to lead the French 2nd Armoured and US 4th Infantry Divisions towards Paris. After his surrender on August 25 at Le Meurice, General von Choltitz was taken to the Prefecture to sign the official surrender of Paris. The battle for the Prefecture and its victims are commemorated on a plaque beside the entrance on rue de la Cité, where damage from gunshots and cannon is also visible. 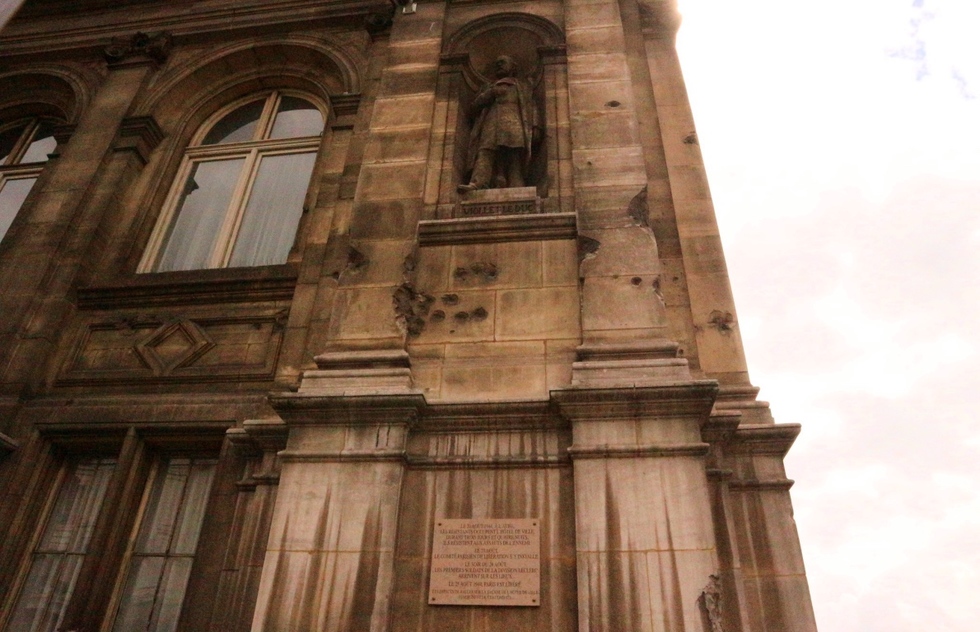 Lily Heise
Hôtel de Ville
The Paris City Hall, l’Hôtel de Ville, was next to be liberated, seized by a small group of Resistance fighters on the morning of August 20. They managed to hold out until the 2nd Division tanks reached the building on the evening of the 24th. Bullet holes and a plaque on the northwestern corner of the building, next to rue de Rivoli, remain proof of their efforts. On his arrival in Paris on August 26, General de Gaulle made one of his most famous speeches from the balcony of l’Hôtel de Ville: ”We are here in Paris. Paris, which stood erect and rose in order to free herself. Paris oppressed, downtrodden, and martyred but still Paris—free now, freed by the hands of Frenchmen, the capital of Fighting France, France the great eternal!" 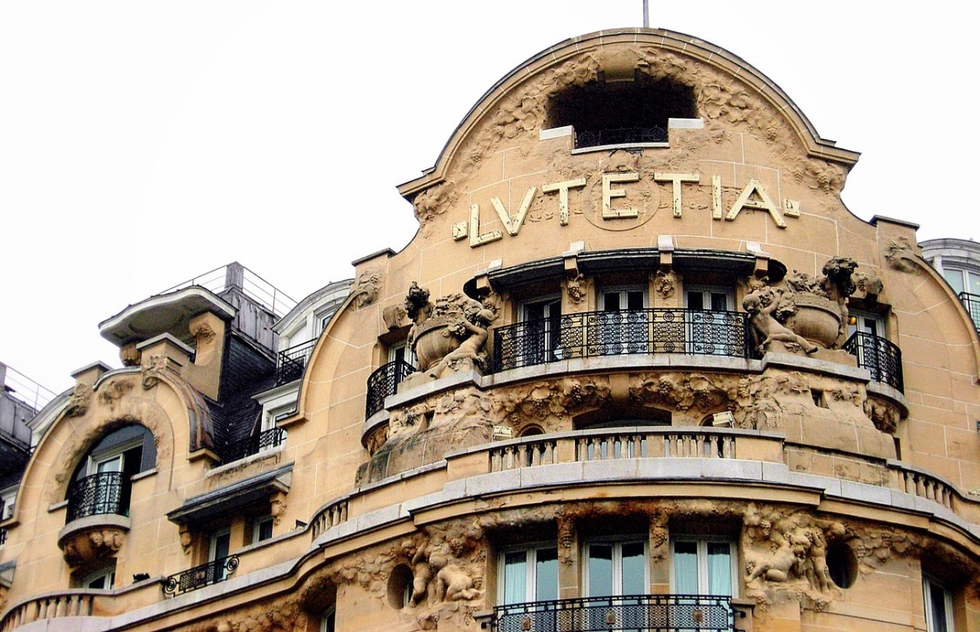 Another requisitioned building, the Left Bank’s most prestigious hotel became the headquarters of German military intelligence. A popular prewar meeting point of Paris’ intellectual and artistic elite, at the outbreak of the war, the hotel accommodated a number of artists and musicians who had fled Nazi-occupied zones. It was therefore fitting that, upon the Liberation of Paris, General de Gaulle requisitioned it as the main repatriation center for displaced people, returnees from concentration camps, and prisoners of war. De Gaulle was personally fond of the hotel, having stayed there many times, including just before he escaped to London. 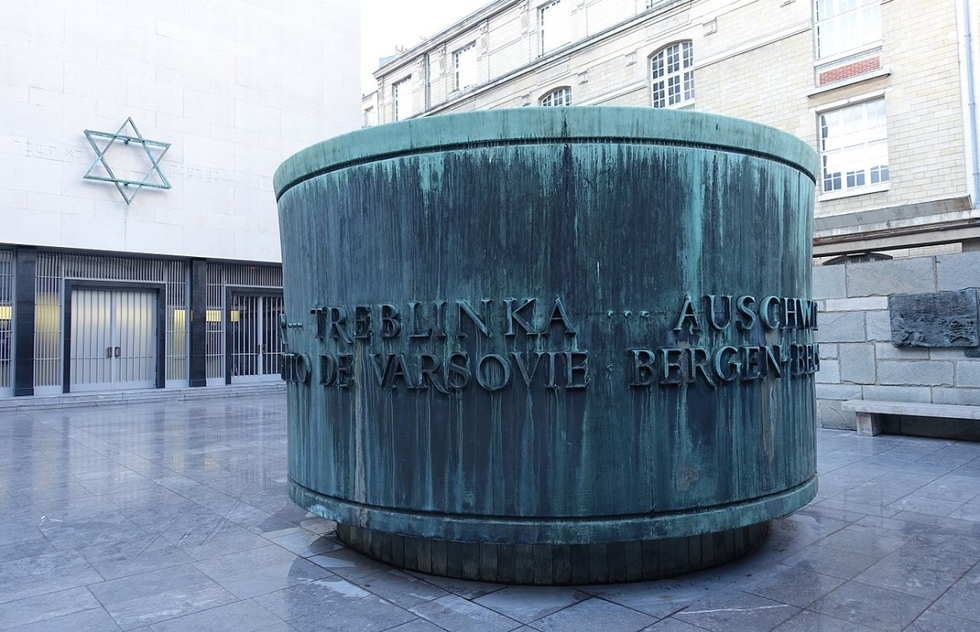 In addition to the plaques, monuments, and damage found around the city, several significant memorials and museums have been established to pay homage and keep the memory of the horrific events of WWII alive. Located in the Marais, the Memorial of the Shoah (pictured; 17 Rue Geoffroy l'Asnier) comprises a museum on the Holocaust, the Memorial of the Unknown Jewish Martyr, and walls listing deported people and those who risked their own lives to save Jews. It also houses the Center of Contemporary Jewish Documentation, an organization secretly founded by Isaac Schneersohn and Léon Poliakov in 1943 in the southeast French city of Grenoble, in unoccupied yet still perilous France, with the aim of collecting evidence of anti-Jewish persecution in Europe as it happened.

Behind Notre-Dame on the eastern point of Ile-de-la-Cité, the Memorial to the Martyrs of the Deportation is a sober monument dedicated in 1962 by Charles de Gaulle to commemorate the 200,000 people deported from France to Nazi concentration camps during the war. For those looking for more information on Paris during WWII and the Liberation, the Army Museum at Les Invalides has a wing dedicated to the Order of the Resistance, and the Musée de la Libération de Paris announced it will open a new space at Denfert-Rochereau in time for the 75th anniversary of the Liberation of Paris on August 25, 2019. You can also visit some of these sites and delve into the topic with a local historian on a "Paris WW2 Nazi Occupation Tour: Lights Out" guided walking route offered by Context Travel.