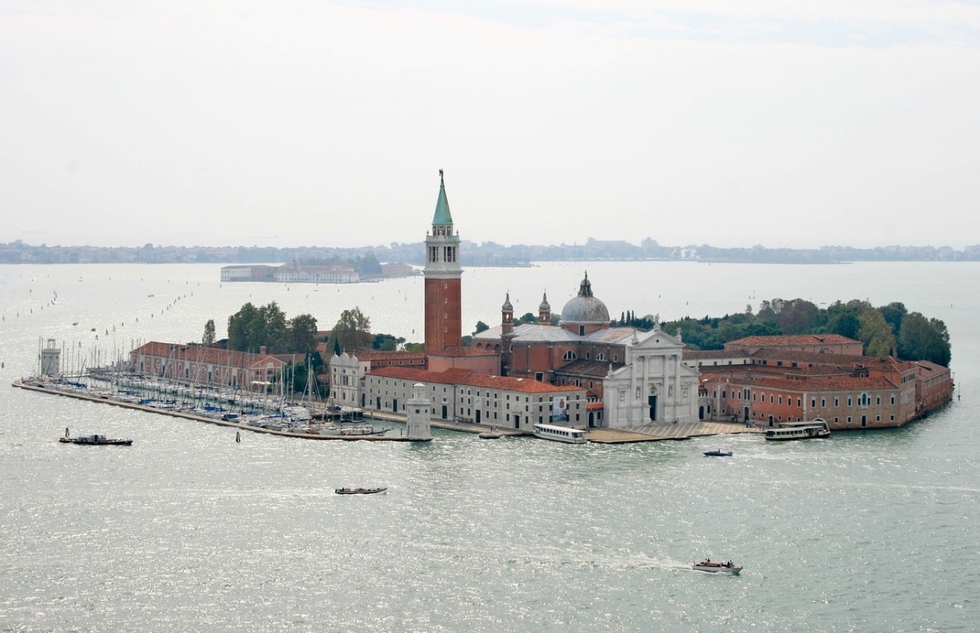 Where to Escape Crowds in Overtouristed Venice, Italy

Venice may be nicknamed La Serenissima, but it’s anything except serene in summer, when the historic center’s population can triple in size. Tourist numbers to the lagoon city have reached 25 to 30 million visitors a year, and many of those visitors are daytrippers who arrive by train or cruise ship and wander the tight lanes until nightfall. However, the masses generally stick to a small radius of Piazza San Marco and the larger streets that lead to the train station, so all it takes to distance yourself from the pack and find that famed serenity is a slight detour or short boat ride. Find the magic in overcrowded Venice at these lesser-known, and more importantly, lesser-visited treasures. 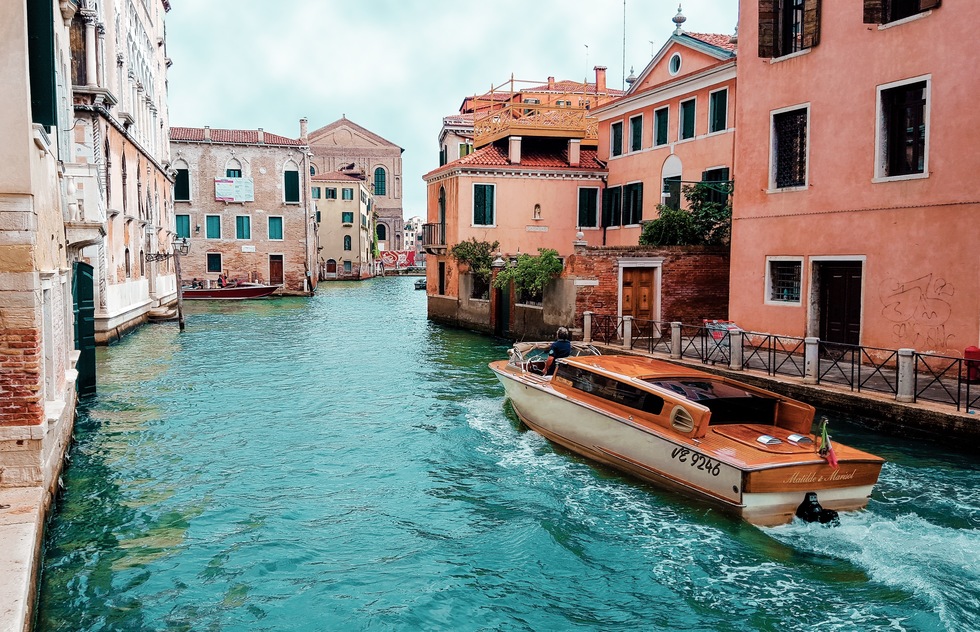 Flanking Saint Mark’s Square to the east, Castello is the largest of the Venice’s six sestieri (districts), but it’s usually neglected by tourists. Built around the Arsenale, the oldest and most important shipyard in the city, the district is a tranquil maze of narrow laneways and gondola-free canals. Your meander through the area will hopefully lead you to the charming small island containing San Pietro di Castello. The remarkable church and slightly leaning bell tower were designed by Andrea Palladio, the architect behind many of Venice’s most iconic buildings of the 16th century. The church was also the basilica of Venice until 1807, when Napoleon gave the title to Saint Mark’s, previously the private church of the Doges. Drift along Giuseppe Garibaldi, where you can find some traditional trattorias, local shops, and even a floating fruit-and-vegetable market. Every other year, the area briefly gets a little busier when it plays host to exhibit spaces of the Venice Art Biennale, including at the district’s large Giardino gardens, another mark Napoleon left on the city. 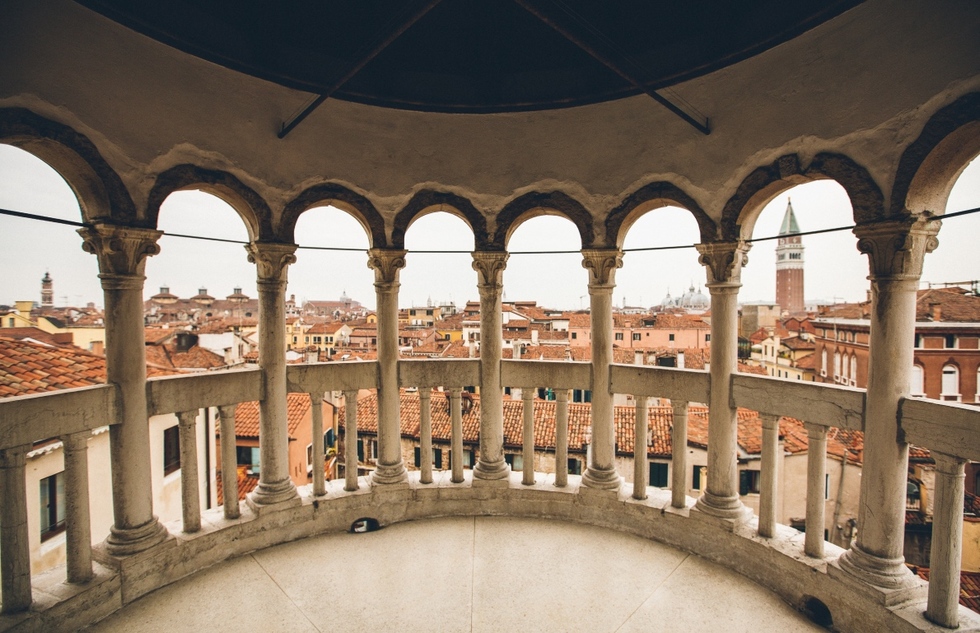 You don’t need to wait in the long line for Saint Mark’s bell tower to enjoy great views of the city. Instead, track down this alternative lookout located a mere few minutes’ walk from Venice’s main square. In 1499, the prominent Contarini family commissioned a new Renaissance-style staircase for their pre-existing palace. The resulting spiral stairwell so resembled a snail (bovolo in Venetian), that the nickname stuck and was also used to refer to the Contarinis. Although Scala Contarini del Bovolo had a starring role in Orson Welles’ 1952 film adaptation of Shakespeare’s Othello, the staircase, and its soaring vistas over the rooftops of Venice, remain little known by the masses. 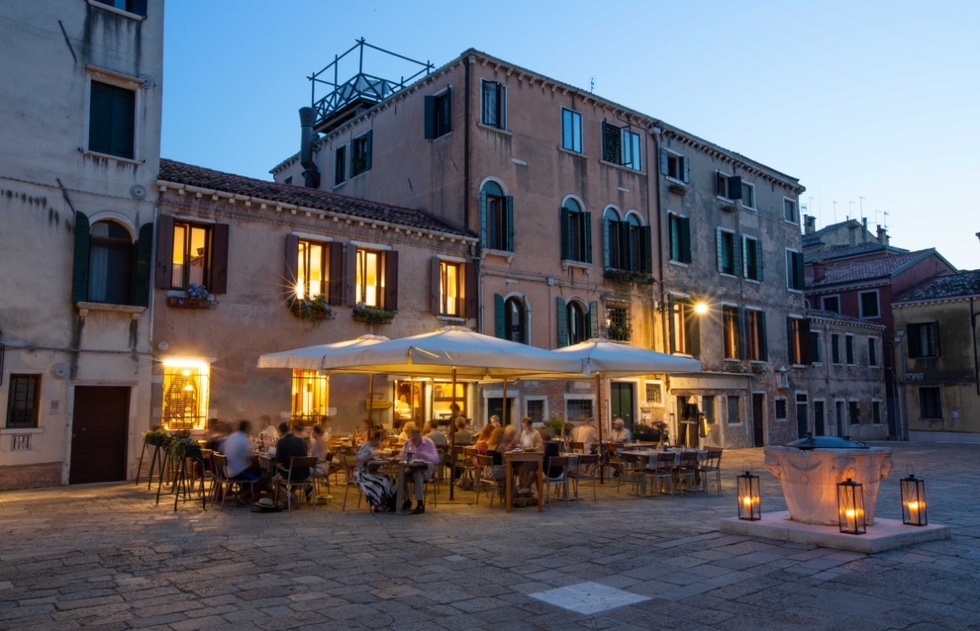 Escape the human deluge in the rest of town during the day by seeking out the many other beautiful and less busy squares, known as campi, that are sprinkled around Venice. You can find a particularly lovely and secret one a mere five minutes’ walk from San Marco: the Campo Barozzi. Accessible via a tiny alley from the stylish shopping street, Calle Larga XXII Marzo, this quiet and sunny haven provides some solace from the hordes. On the southern edge of the square is the historic Palazzo Ca’nova, which rents several stylish vacation apartments that either face the campo or the Grand Canal and have access to a shared terrace overlooking the area’s rooftops.

Another exquisitely serene campo hides in the offbeat Cannaregio district. The isolated Campo Madonna de l’Orto (pictured) is named in honor of its main building, a lovely late-Gothic brick church. It might not look like the most prestigious sanctuary in Venice, nevertheless, it’s the final resting place of one of the city’s most important artists, Tintoretto. In addition to his tomb, it contains several of his paintings. On the other side of Venice, deep in another very local district, Dorsoduro, is the Campo dell'Angelo Raffaele (also called Campo de l'Anzolo Rafael). The sleepy square is guarded by two churches, San Sebastiano and Angelo Raffaele, as well as the Trattoria Anzolo Raffaele, a favorite local restaurant that prides itself on its high-quality seasonal cuisine and its inviting terrace. 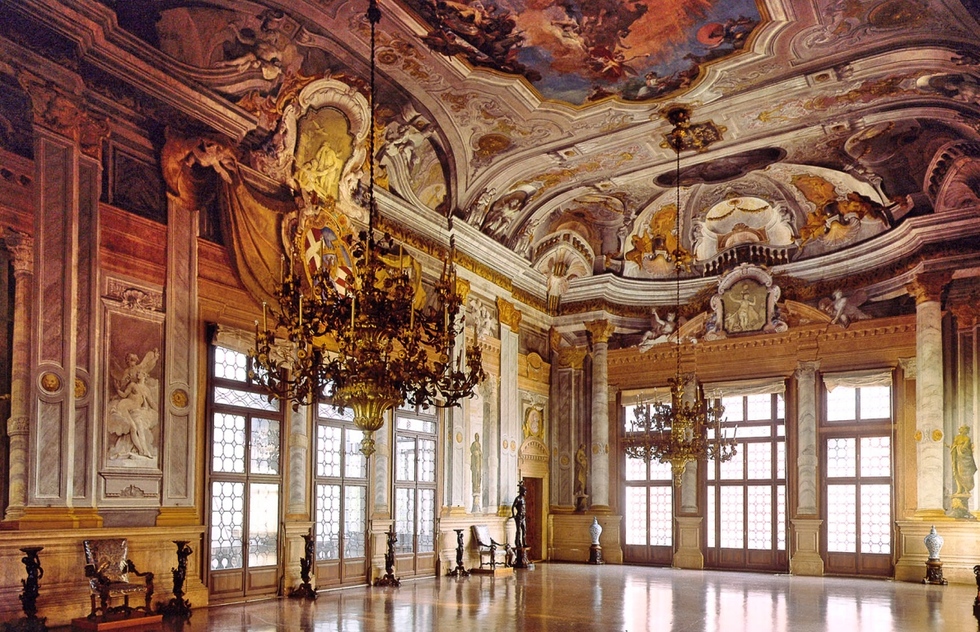 The Doge’s Palace is admittedly spectacular, but it’s also spectacularly crowded in peak season, making it hard to appreciate its majestic decoration and renowned frescoes. What few people know is that you can admire an equally extraordinary palace across the Grand Canal in Dorsoduro. The opulent Ca’Rezzonico was commissioned in the mid-1700s for the prestigious Bon family. Work on the mansion was initially carried out by Baldassare Longhena, the prolific local architect behind the Ca’ Pesaro and the Basilica di Santa Maria della Salute. Unfortunately, the exorbitant costs of the extravagant residence, covered in breathtaking frescoed ceilings by Giambattista Tiepolo and other leading Venetien artists, bankrupted the Bons. It was subsequently bought and finished by Giambattista Rezzonico, who thus became its namesake. In later centuries the palace hosted several notable guests including poet Robert Browning, who died here in 1889, and composer and songwriter Cole Porter, who rented it from 1926 to 1927. Now a museum housing a remarkable collection of paintings, sculptures and furnishings of the 18th century, a visit through its interiors provides a fascinating window into this grand era of the Venetian Republic. The museum also runs a bar overlooking the Grand Canal and a lovely garden, with a labyrinth and playground to occupy kids. 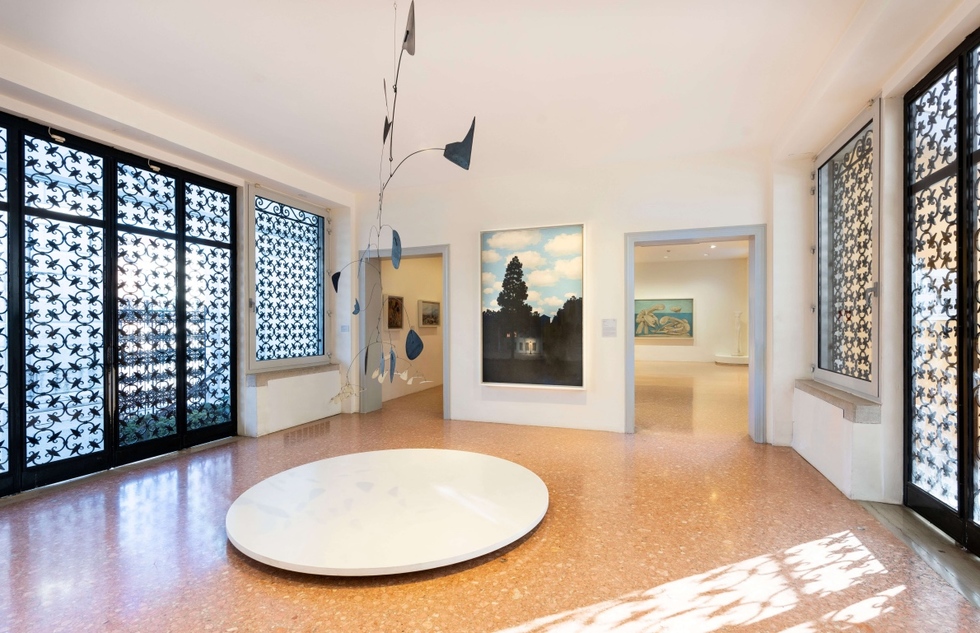 Matteo De Fina
Peggy Guggenheim Collection
Fast forward two centuries and to another historic palace on the Grand Canal: the landmark modern art collection of Peggy Guggenheim. The American philanthropist lived in the Palazzo Venier dei Leoni for the last 30 years of her life, gradually filling it with works by the likes of Picasso, Mondrian, Brancusi, Calder, and Dali. Guggenheim regularly opened her home to the public, and after her death in 1979 it was converted into a permanent gallery. The calm that reigns in the airy museum is carried over onto its terrace overlooking the Grand Canal and its splendid sculpture garden. After leaving, extend the tranquil ambiance by wandering through the tiny vine-laden laneways of this uncongested part of Venice. Your wander could take you past the oft-painted Basilica di Santa Maria della Salute, the arresting views of San Marco (Saint Mark's) to the north from in front of the Punta della Dogana, or the more offbeat panorama from the Fondamenta delle Zattere, the long waterfront promenade facing Giudecca island to the south. 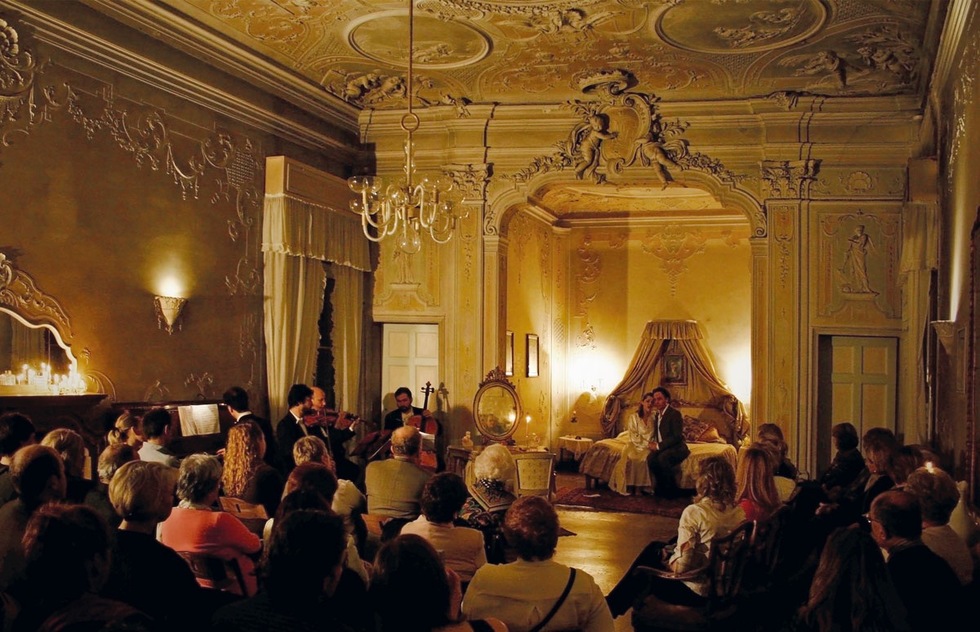 Music is woven into the history of Venice. One can always experience this via the live music at the historic cafés of Piazza San Marco or at the Teatro la Fenice. But you can enjoy a much more original and less crowded immersion into the city’s musical heritage by attending one of the performances at Musica A Palazzo, held in a 15th-century palace hidden a few blocks from San Marco. Attendees are received like private guests of a noble Venetian family. As the plots of famous operas such as La Bohème, Tosca, and La Traviata unfold, guests move from room to room of the palace in the style of a 19th-century "Salotto Musicale" (Musical Salon). Seating is spread around each room and surrounds the performers and musicians, intensifying the intimacy. All of this is made even more magical at intermission, when you sip a glass of Prosecco in the lounge overlooking the Grand Canal. 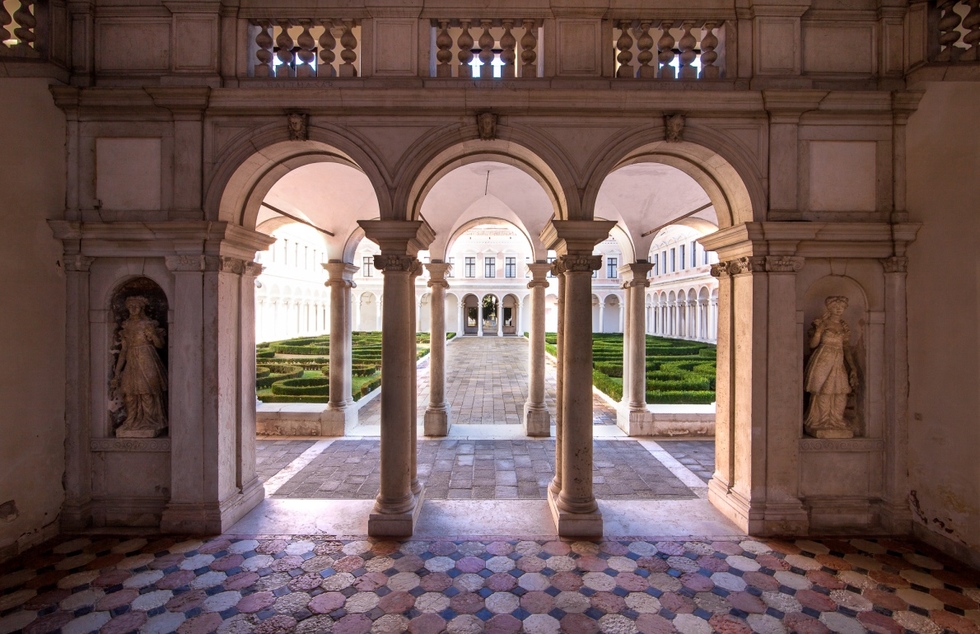 Across water from the throngs of Piazza San Marco, this island and monastery complex is captured in photos most tourists snap of Venice, yet few take the brief ferry ride over to explore it. The most prominent structure on the spiritual island is the Church of San Giorgio Maggiore, another of Palladio’s Venetian architectural masterpieces, which contains artwork by the great Tintoretto and Bassano. The late 18th-century bell tower is one of the best vantage points of Venice.

Explore the church using hour-long audio-guide tours from its bookstore. Those tours touch on a few other highlights in the area. One is the former monastery, and you mustn’t miss the monumental grand staircase, library by Longhena, and the Palladian Refectory, where the famous Veronese painting The Wedding Feast at Cana (stolen by Napoleon and now at the Louvre in Paris) was once on display. The tour also visits two historic cloisters (pictured); the Borges Labyrinth (created in 2011 in honor of Argentine writer Jorge Luis Borges); and “The Wood,” 10 Vatican Chapels designed by internationally renowned architects for the 2018 Architecture Biennale. After your visit, settle in at the delightful San Giorgio Café for a coffee or Aperol Spritz with a perfect backdrop of the Lagoon and Saint Mark’s Square. 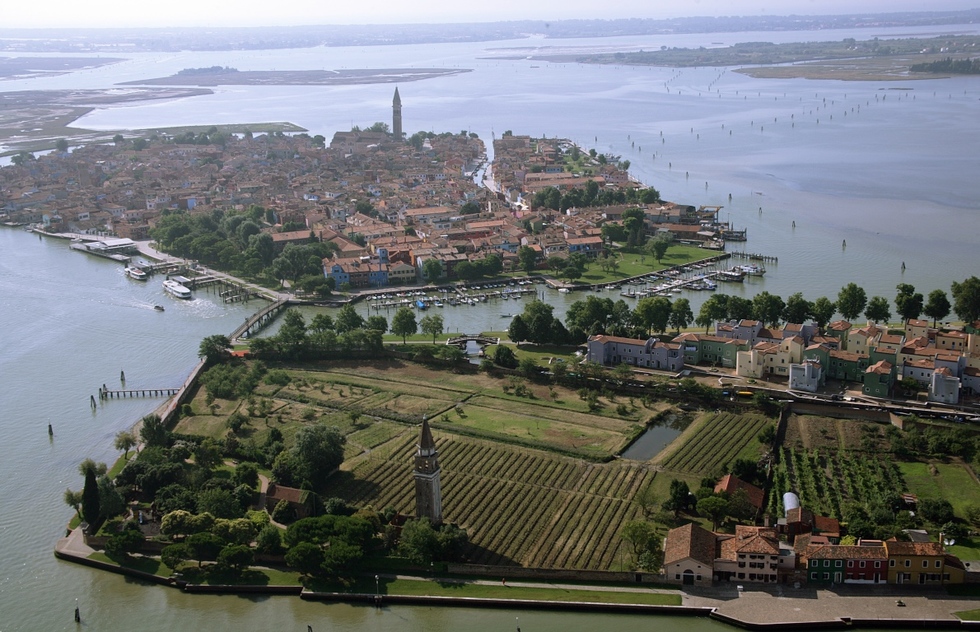 Nevio Doz
Islands in the Lagoon

Beyond the main islands of Venice, there are more than 100 inhabited and uninhabited islands spread across the Lagoon, some of which are relatively easy to get to for a welcome getaway from the masses. The glassblowing center of Murano is over-trodden and colorful Burano is also becoming a victim of its own charm. For a much mellower day, walk over the bridge from Burano to Mazzorbo (pictured). That verdant island is home to the historic wine estate Venissa. You can freely visit its old vineyards and vegetable garden or taste both of these in the exquisite creations of its Michelin-starred restaurant. It’s run by the talented Francesco Brutto, named best young chef in Italy in 2016 and 2017.

The religious islands scattered around the Lagoon, like San Francesco del Deserto and San Lazzaro degli Armeni, also provide a heavenly escape from the hordes. Take the local water buses out to them, or look at Delta Tours’ range of day trips that come with a gourmet seafood lunch. Alternatively, you can have a longer experience around the islands of the lagoon and sights of northern Italy on a week-long itinerary aboard La Bella Vita, a small-group luxurious and gastronomic cruise available through Barge Lady Cruises. 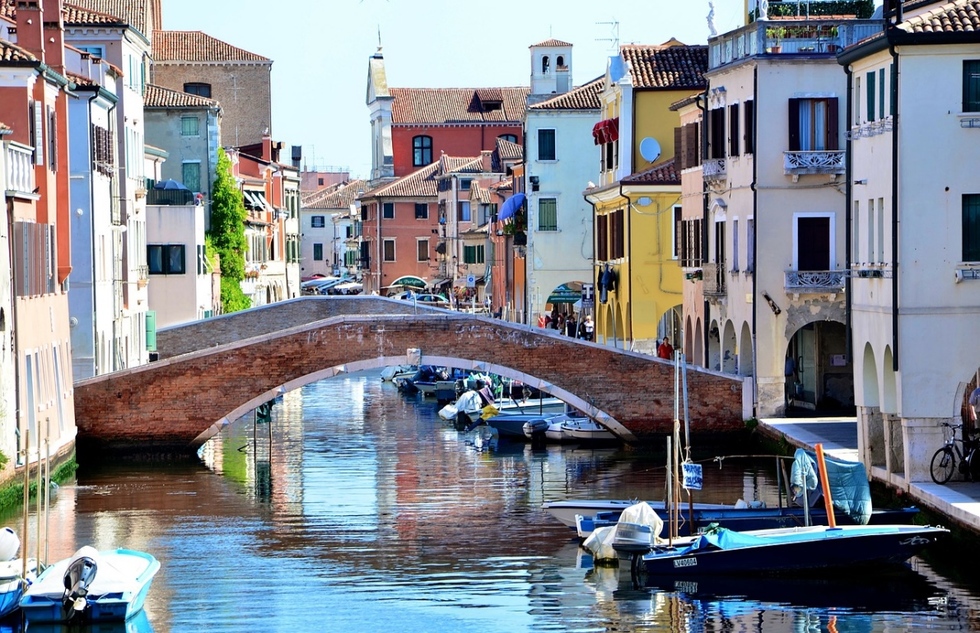 If you can spare a day during your stay in Venice, take the ferry to this authentic fishing village. First settled by the pre-Roman Etruscans, the town sits on an island and part of the mainland at the southern end of the Lagoon, 25 kilometers (15 miles) from Venice. Sometimes referred to as the “second Venice,” Chioggia is crisscrossed by canals and and brimming with bridges, tiny alleys decked out in colorful flowers, and hanging laundry. A few notable churches will reward your amble, including the Chiesa di San Domenico, which stands on its own island and has works by Tintoretto and Bassano. You’ll inevitably come to its main street, Corso del Popolo, rich in Italian small town charm and patronized mostly by residents instead of tourists. Fishing is still very much a part of their lifestyle, and you can peruse the catches of the day at the morning fish market. The town’s fish traditions are celebrated in its annual La Sagra del Pesce, a 10-day festival held in mid July.