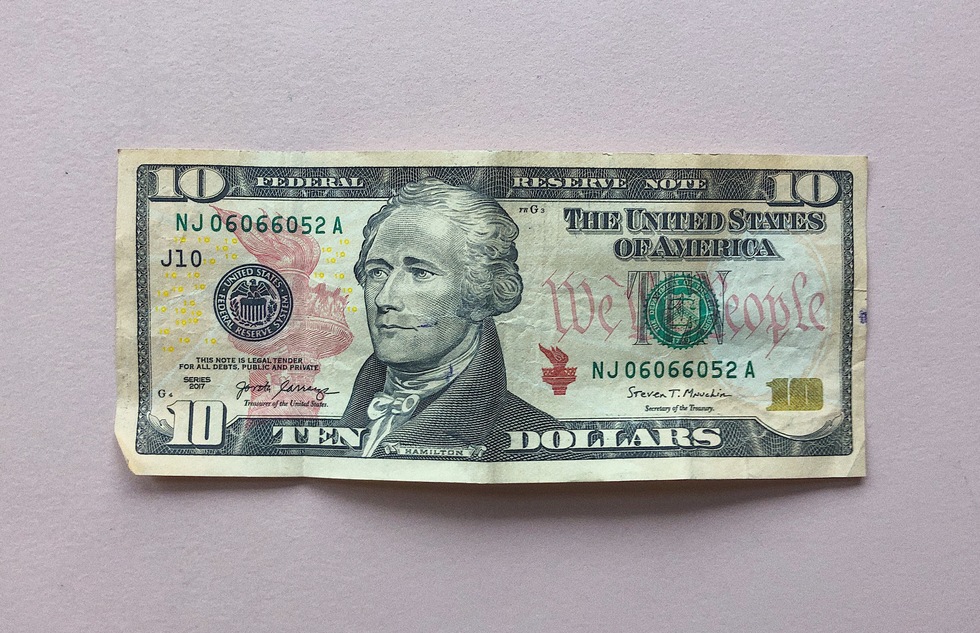 Alexander Hamilton's New York City: A Tour of the Rooms Where It Happened

Among America’s Founders, none was more of a New Yorker than Alexander Hamilton. The soldier–turned–statesman–turned–$10-dollar-bill cover model checks off several of the city’s most prominent demographic boxes: He was an immigrant from the Caribbean, he worked in finance, he had a genius for self-invention, and he had at least one terrible experience in New Jersey (in fact, he didn’t recover, having received a fatal gunshot wound from his duel with Aaron Burr in Weehawken). Of course, New York City is also where Hamilton’s pop-cultural significance was cemented, thanks to Lin-Manuel Miranda’s hugely successful, Tony- and Pulitzer-winning Broadway bio-musical.

Many of Hamilton’s NYC haunts have vanished since his death in 1804. Bookending Manhattan on its northern and southern ends, the sites that remain not only bear traces of this pivotal figure who shaped the United States but also provide insights into the city that shaped him. These are the rooms where it happened. 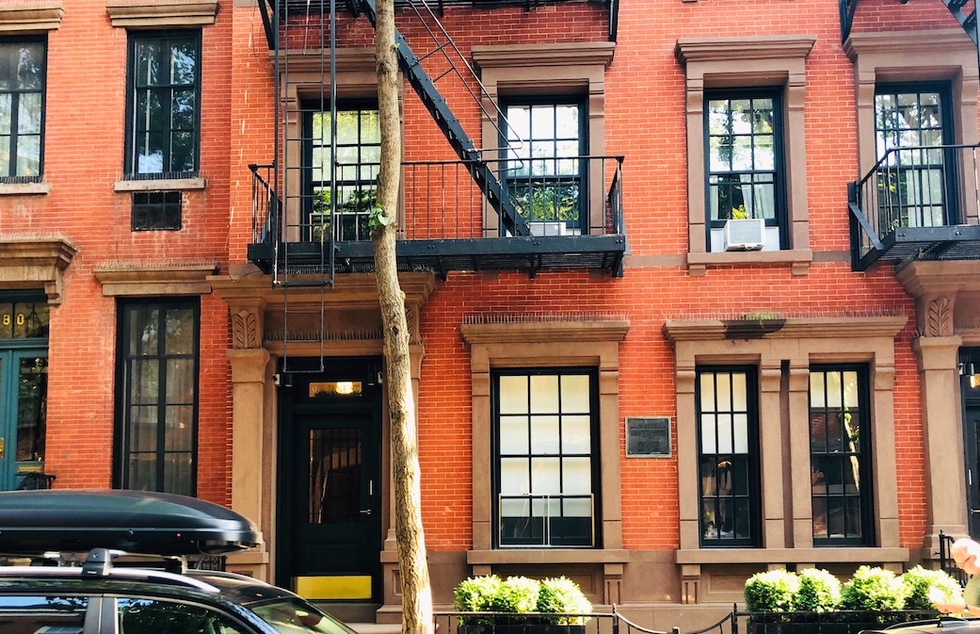 Let’s start at the end. Hamilton lost his duel with Vice-President Burr on July 11, 1804. The cause of the fight was Hamilton’s opposition to Burr’s run for New York governor, but the showdown had been a long time coming. Afterwards, the mortally wounded 47-year-old Hamilton was brought to the mansion of his friend William Bayard, Jr., a banker who lived in Greenwich Village. Hamilton died there the next day. A plaque at what is now 82 Jane St. (pictured) purports to mark the spot—though historians say that Bayard’s home (long gone) was actually located a little further north.

An elaborate funeral procession took Hamilton to his final resting place, but you can get there by either taking a cab or a southbound 2 or 3 train at the 14th Street subway station. Get off at Wall Street and walk northwest until you reach Broadway and our next stop. 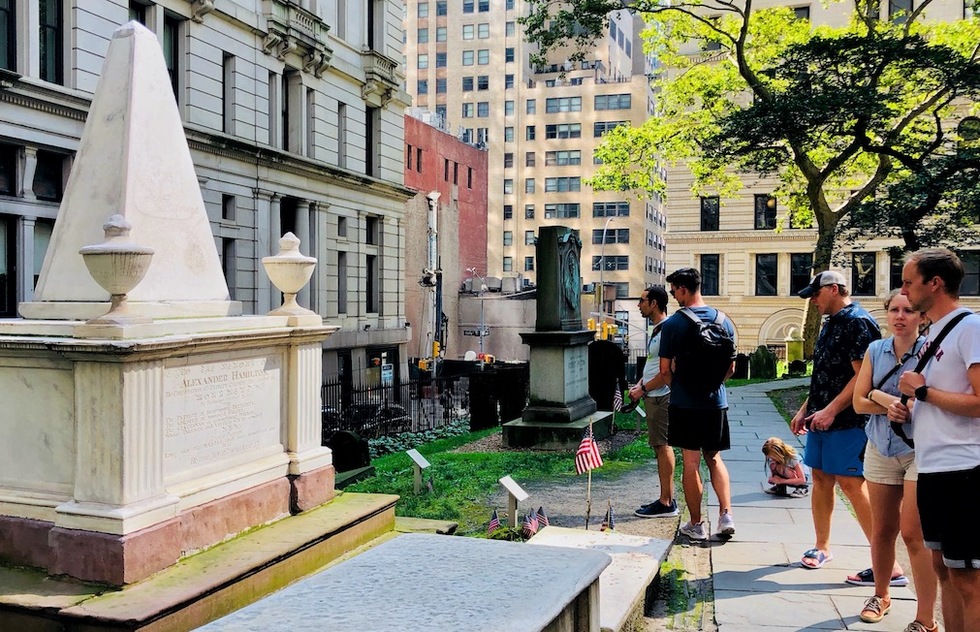 Hamilton was interred in the cemetery on the south side of Trinity Church (75 Broadway) in Lower Manhattan. He’s buried under a white marble obelisk and next to his wife, Eliza, who lived until 1854. Because of Broadway's Hamilton, the graves now draw lines of musical-theater pilgrims, some of whom leave flowers, mementoes, and coins (though a nickel, bearing the likeness of Hamilton’s archrival, Thomas Jefferson, would be a definite dis). The grave of Eliza’s sister, Angelica Schuyler Church, is on the north side of Trinity. Alexander and Eliza’s eldest son, Philip, who died in a Weehawken duel three years before his father’s, is also buried somewhere onsite, but his grave is unmarked. 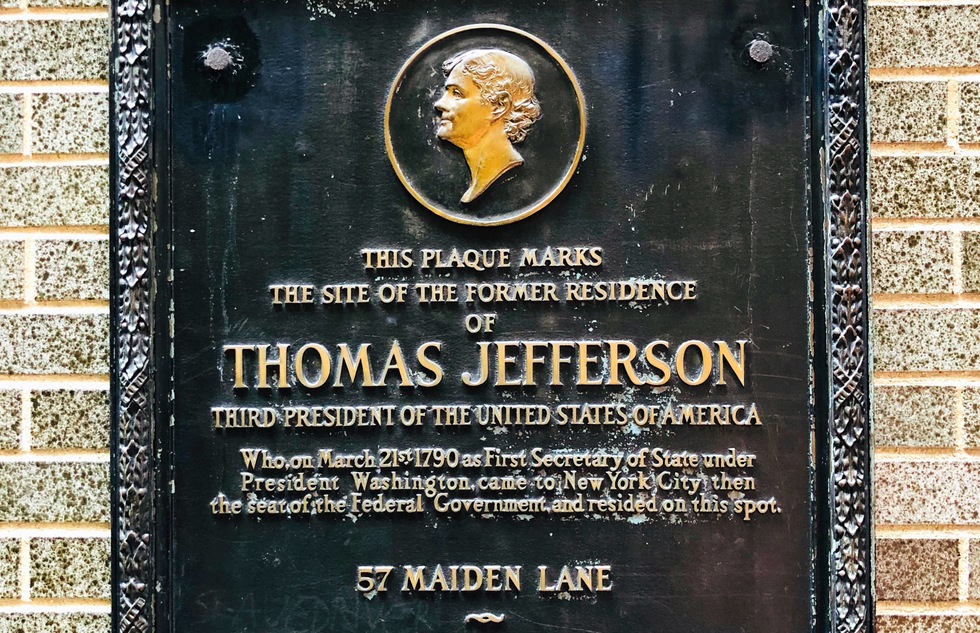 “In New York you can be a new man,” as Miranda’s lyrics put it. And the city itself has undergone more than its share of makeovers. That’s why many of the buildings and even some of the streets where Hamilton lived and worked are no longer around. To wit: Continue north on Broadway from Trinity Church, and you’ll pass Cedar Street, where the Hamiltons had a townhouse (gone), and then you’ll come to Maiden Lane, where Thomas Jefferson had a residence (ditto) when he was George Washington’s Secretary of State. It was at this address, 57 Maiden Lane, where Hamilton, as Treasury Secretary, met Jefferson and James Madison to hammer out the Compromise of 1790. What transpired here is memorialized in the musical in the showstopping song "The Room Where it Happens": Hamilton got the recalcitrant Virginians to let the national government assume the states’ debts in exchange for moving the nation’s capital from New York to the South. That’s why Washington, D.C., is a thing. Today, the spot where the compromise was made is marked by a plaque attached to a drab skyscraper where the Department of Sanitation has offices. Infer from that what you will. 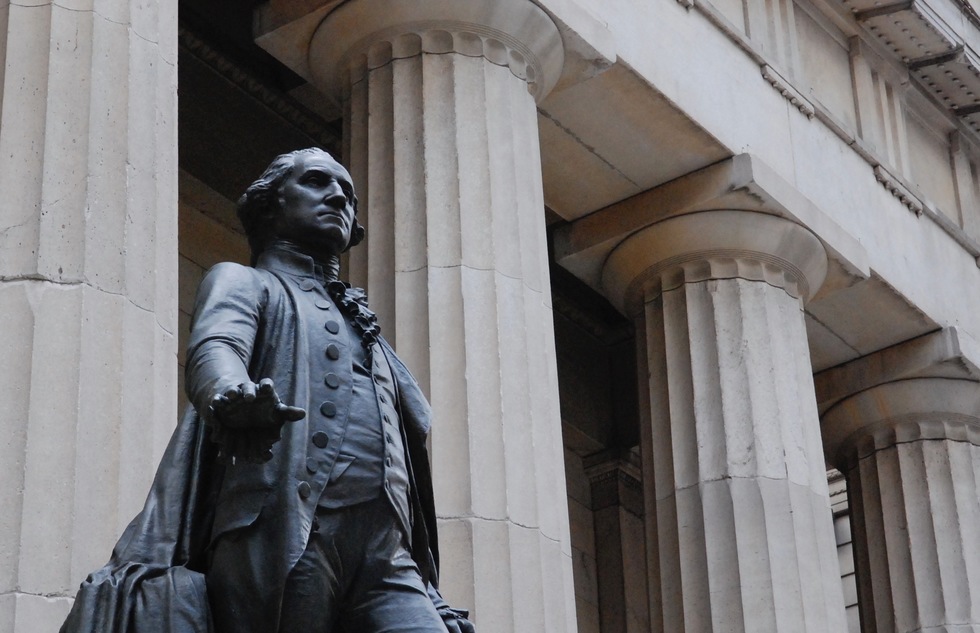 It makes sense that Hamilton spent a lot of time in Lower Manhattan, given its importance in post-Revolutionary politics and money matters—Hamilton’s areas of expertise. At the corner where Maiden Lane meets William Street, turn right and continue for a few blocks until you reach the country’s center of governmental and financial action in the late 18th century: Wall Street (now it’s just the center of the entire world’s financial system). At 48 Wall St., you’ll find the original home of the Bank of New York, established in 1784 by a group that included Hamilton and Burr. Hamilton used to live across the street, in yet another residence that’s no longer there. At 26 Wall St., catty-corner from the New York Stock Exchange, stands Federal Hall, where George Washington, whose cabinet Hamilton would soon join, was sworn in as the first president of the United States (that's George's statue out front). Well, okay, the swearing-in didn't happen at this Federal Hall—the original building was demolished in 1812. But this 1842 replacement, now a national memorial with rotating historical exhibits about the Founders and the city, is on the same spot. (It's on our list of great American historic sites that are actually re-creations.) 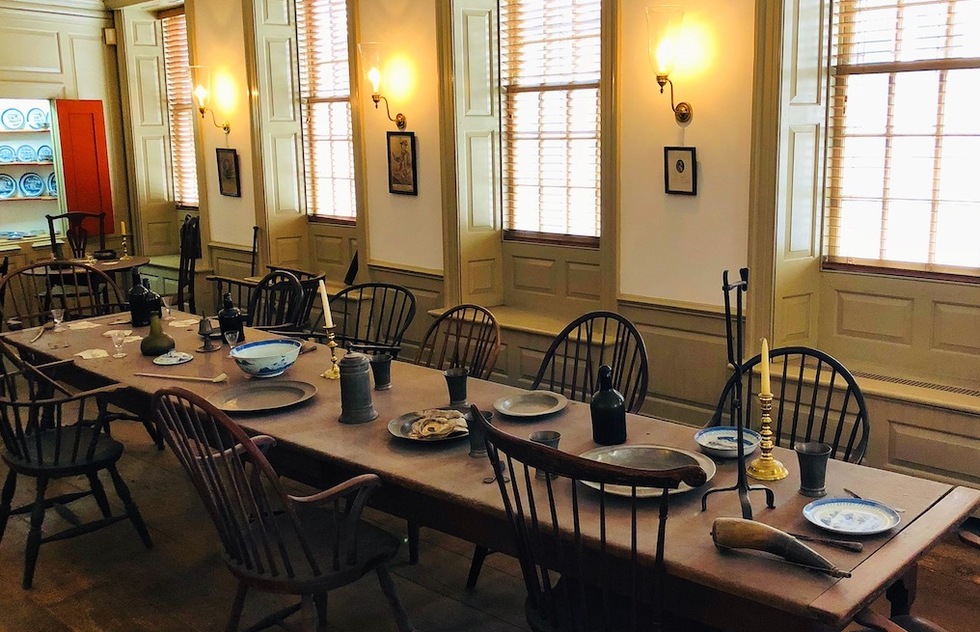 Wrap up the Financial District portion of our tour with a stop at Fraunces Tavern, one of the oldest food-and-drink establishments in New York. To get there from Federal Hall, take a 5-minute walk south on Broad Street until you reach a brick building at the corner of Broad and Pearl. Founded in 1762, Fraunces Tavern is where Gen. George Washington bade his troops an emotional farewell after the Revolutionary War. In 1804, both Hamilton and Burr attended a Society of the Cincinnati dinner held here just days before their fateful duel. A museum upstairs recounts the place’s long history. Return to the ground floor to try hearty traditional dishes such as chicken pot pie or throw back one of the bar’s seemingly limitless craft beer options. If you’re looking for a Hamiltonian drink, you’ll have to stick to coffee. He wasn’t big on booze—in fact, fellow Founder John Adams thought he was a lightweight. 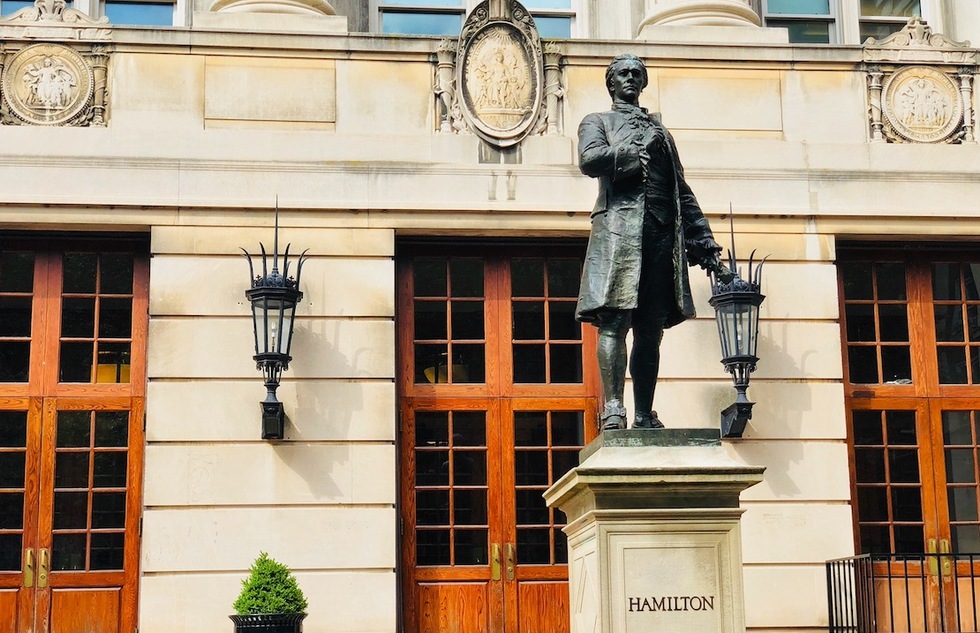 School is what brought Hamilton to New York in the first place. Born on the tiny Caribbean island of Nevis to a father who left and a mother who died, the 17-year-old future statesman was working as a clerk when his intelligence and way with words prompted local business leaders to pay for his journey to the American colonies for an education. He enrolled in King’s College, later renamed Columbia University. It was located in Lower Manhattan in Hamilton's day, but the main campus moved Uptown by the end of the 19th century. Though the alum in question never roamed the school’s current halls, he does have one named after him—Hamilton Hall (1130 Amsterdam). It’s a dorm, and, looky there, a statue of its namesake stands out front.

(To get to Columbia from the previous site, Fraunces Tavern, you can catch a cab, order a Lyft, or board a 1 train at the South Ferry subway stop for a long ride north to 116th Street. The latter option should give you enough time to finish a chapter of Ron Chernow’s 2004 biography of you-know-who.) 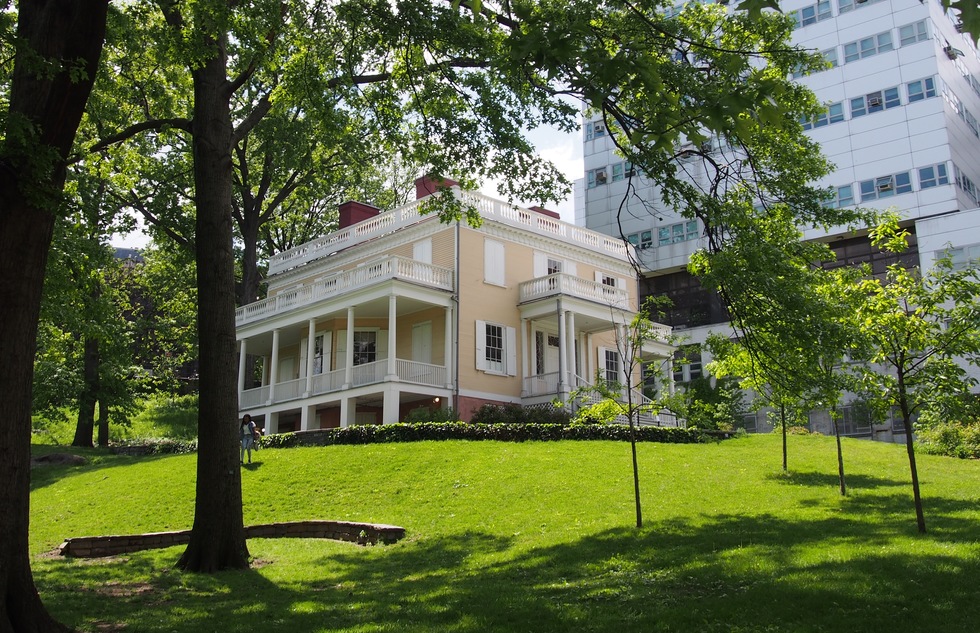 Back when Upper Manhattan was the sticks, the former Treasury Secretary purchased a 32-acre bucolic estate with a commanding view of the Hudson and Harlem Rivers. He installed a hilltop Federalist-style residence designed by the same guy who did Gracie Mansion and City Hall. It would be the only home Hamilton ever owned in his life—which would be cut short just two years after construction was finished. For a couple centuries after that, the Grange, as Hamilton named it, was neglected, repurposed, and relocated twice. Now a restored national memorial situated on some of Hamilton’s original land in present-day St. Nicholas Park (from Columbia, take the 1 train north two stops to 137th Street and walk four more blocks to 414 W. 141st St.), the stately home attracts a steady parade of Hamilfans. Inside, a gallery space contains an exhibit and video on the original owner’s life, and you can see a handful of rooms filled with period furnishings. Try to ignore the modern engineering school next door and pretend this is still the countryside. 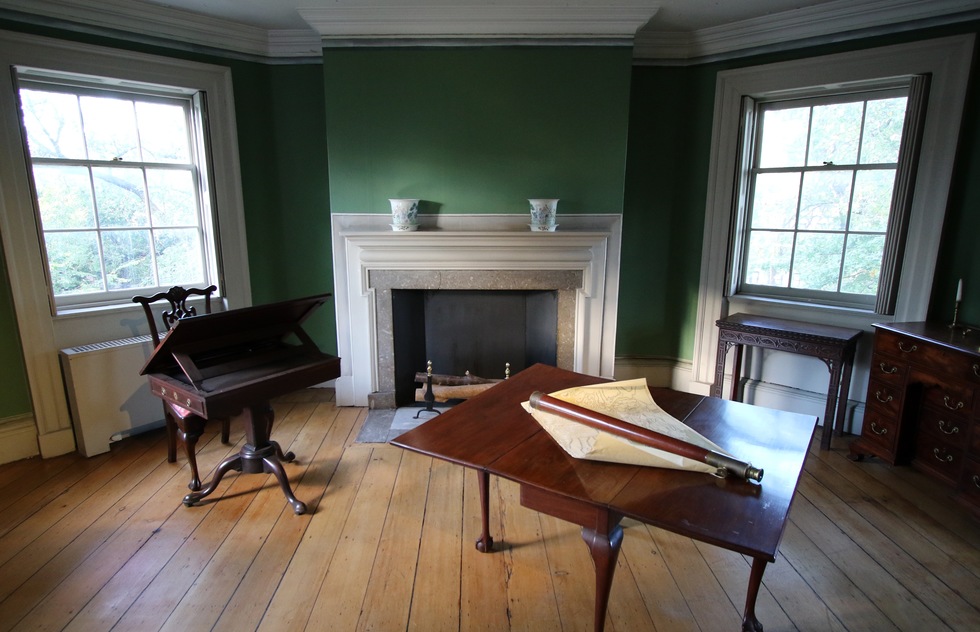 Manhattan’s oldest home can be found about a mile north of the Grange. To get there via public transit, walk east to St. Nicholas Avenue, board a northbound C train at 145th St., disembark at 163rd, and walk east along cobblestone Sylvan Terrace till you reach the white, two-story mansion. Built in 1765, the house briefly served as Washington’s headquarters during the Revolution and later hosted his first cabinet meeting after he became president. Hamilton and Jefferson were there, already staking out the positions that would eventually result in America’s two-party political system. And yes, of course the place has a Burr connection. In the 1830s, long after the former vice president had fallen into disgrace, he married owner Eliza Jumel and moved into a bedroom on the second floor—the same bedroom where Lin-Manuel Miranda, seeking inspiration, would visit to write parts of Hamilton. And that just about covers our entire cast of characters. In addition to checking out Burr’s dreary chamber, don’t miss Washington’s old war room and the octagonal parlor downstairs. 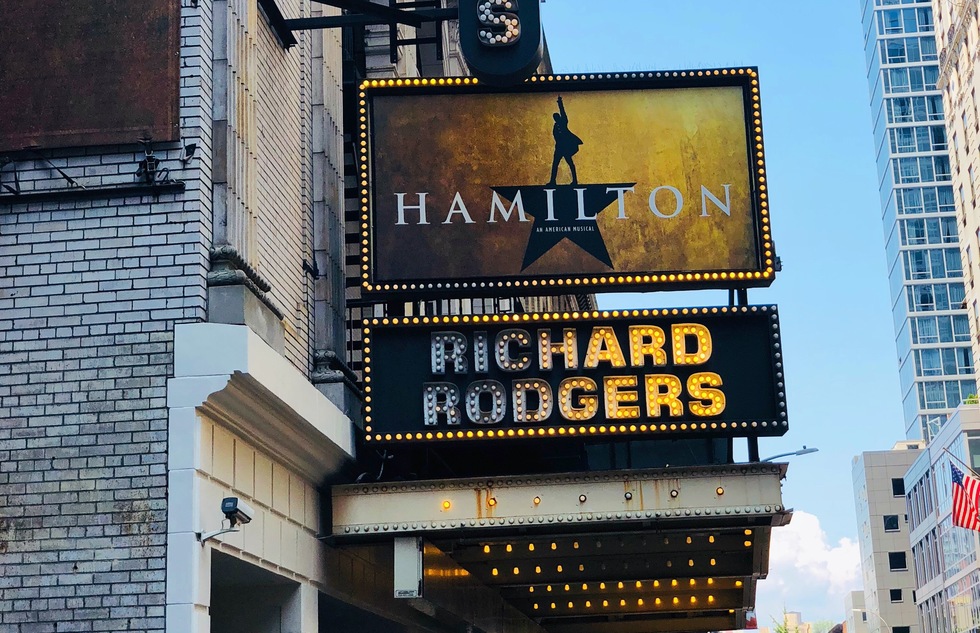 Since 2015, the most popular Hamilton pilgrimage site has been the Richard Rodgers Theatre (226 W. 46th St. in Midtown), where the Broadway musical is playing. Tickets aren’t as hard to come by as they once were, but they’re still expensive—a problem at all Broadway shows these days. If you’re feeling lucky, try the Hamilton digital lottery, which you can enter online or via smartphone app starting two days before each performance. Drawings for 46 seats are made for the next day’s show at 11am. If you win, tickets are only $10 a pop (you can enter for one or two seats), but you have to claim your prize and pay the sharply discounted rate by 4pm on the day before the performance or, sorry, you’ve thrown away your shot.

As it happens, Hamilton is not the first musical about America's founding staged at this venue. In 1969, Broadway's 1776 opened at what was then known as the 46th Street Theatre. Alexander Hamilton is not a character in that show, which centers on John Adams and Thomas Jefferson—neither of whom got along with Hamilton. But hey, Miranda's musical has already surpassed 1776's 3-year run, so who got the last laugh? 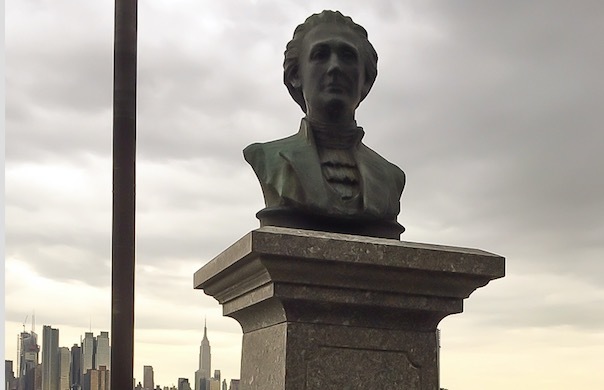 PatersonGreatFalls -A Visual Reference for Teacher / Flickr
Beyond Manhattan

For further explorations, there are several Hamilton sites that are outside the borough of Manhattan but still relatively close by. The Weehawken Dueling Grounds are across the Hudson River in New Jersey. On a bluff above the wooded spot where the most notorious duel in U.S. history took place, you can look at the boulder where Hamilton supposedly rested his head after Burr shot him. The rock sits next to a pedestal supporting a bust of Hamilton (pictured), with the Manhattan skyline in all its frenzied glory serving as backdrop, which seems fitting.