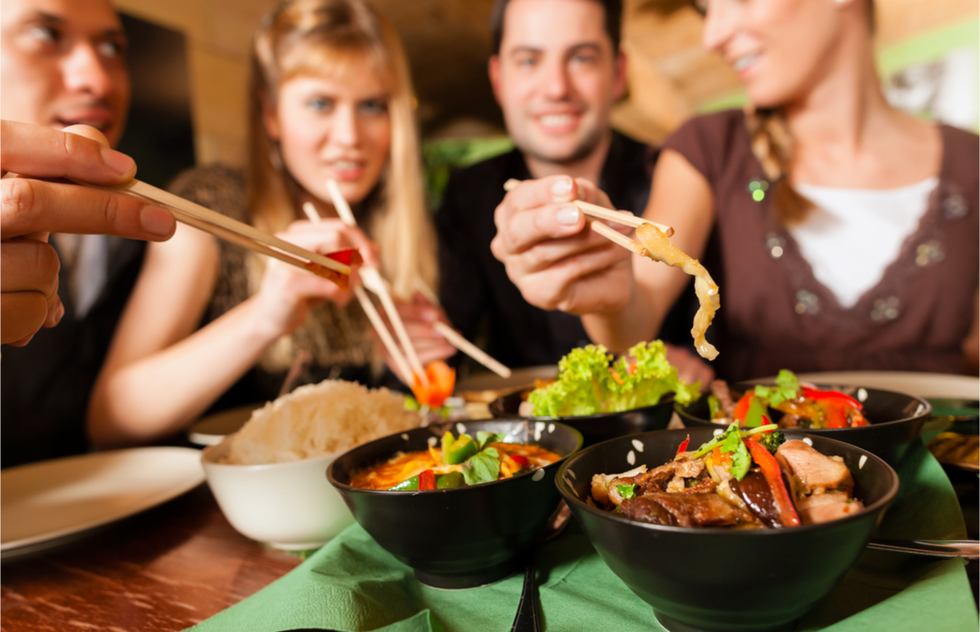 The Restaurants That Introduced International Dishes to American Eaters

Americans take it for granted that they can find sushi, cappuccino, or Neapolitan pizza in their own neighborhoods. But each dish or drink represents a leap of faith on the part of a savvy restaurant owner who had the confidence to create a market in the U.S. for another country's specialty.

What follows is a look at the restaurants that introduced foods that feel like American cuisine but are actually imported. As with our feature on the birthplaces of classic American foods, there are sometimes competing origin stories. We’ve tried to tell the most widely accepted ones.

Most of these foods found their way to the U.S. through New York City, Los Angeles, or San Francisco—which shouldn’t be surprising, given that those cities have been immigration gateways for decades. Though some of the restaurants profiled below are no longer in business, we've included links to the ones that are still going strong in case you'd like to taste these treats in person some day. 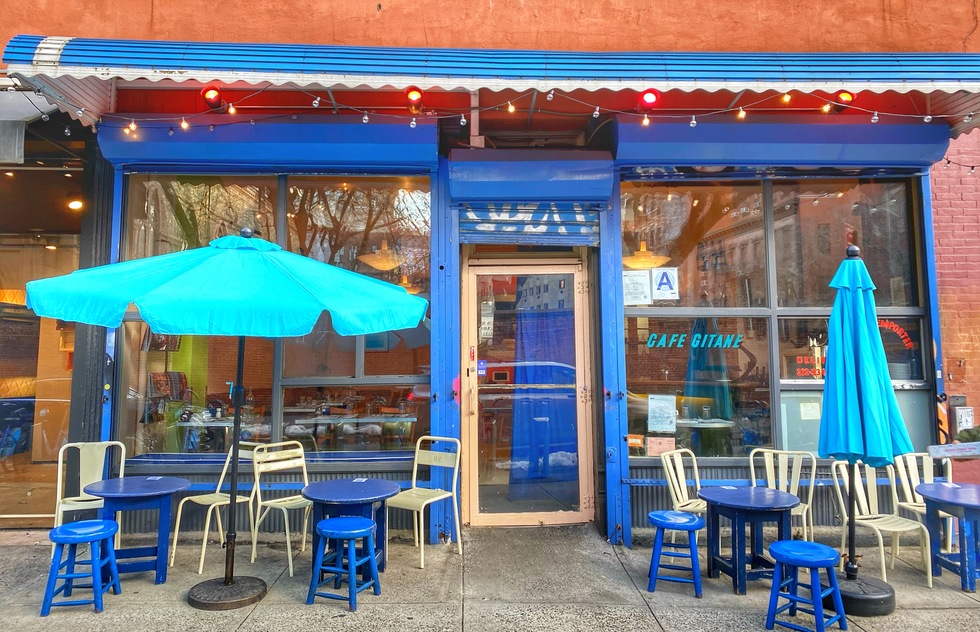 Beloved by bougie brunchers everywhere, the avocado toast we know today comes from Australia, where it became a thing in the mid-1990s. Granted, that wasn't the first time anybody thought to smear avocado on bread (Bon Appétit dug up a 1920 recipe from a California newspaper), but the later version from Oz—topped with mashed avocado, chili flakes, and a fried or hard-boiled egg—was what inspired a million Instagram posts. Aussie expat Chloe Osborne is believed to have introduced American taste buds to the trend at Manhattan's Café Gitane. 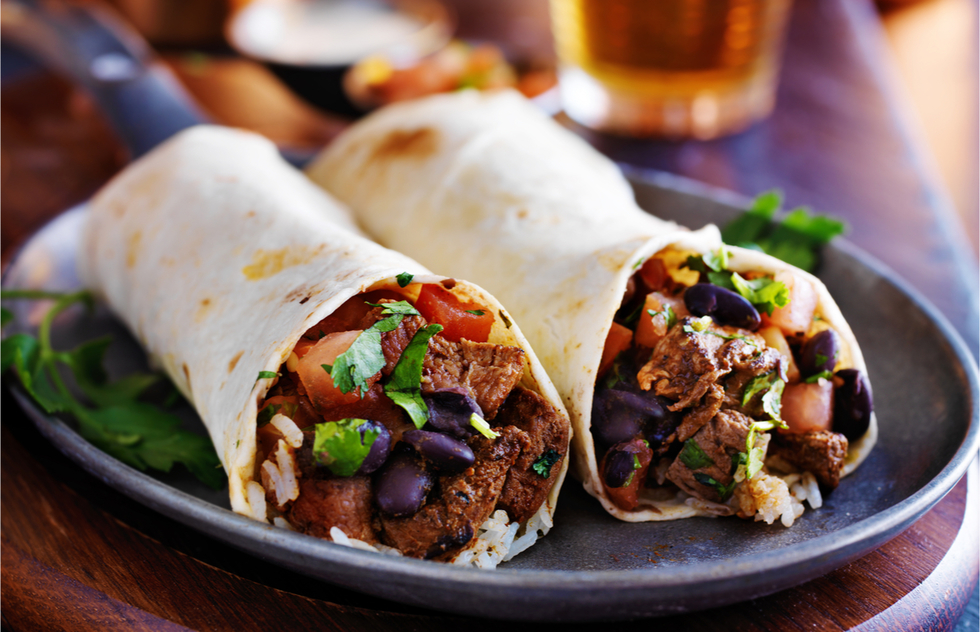 Nowadays you can get burritos every which way: stuffed with breakfast meats, Korean bulgogi, quinoa and lentils, and on and on. It’s thought that the original Mexican version of the dish crossed the border with migrant workers, eventually finding a spot on the menu at L.A.'s El Cholo in the 1930s.

As for the name, it’s a diminutive for burro (Spanish for donkey), but why? Some say it’s because burritos were originally sold from donkey carts at markets in Mexico. Others see a resemblance to donkey ears or the packs that donkeys carry. It's a mystery. 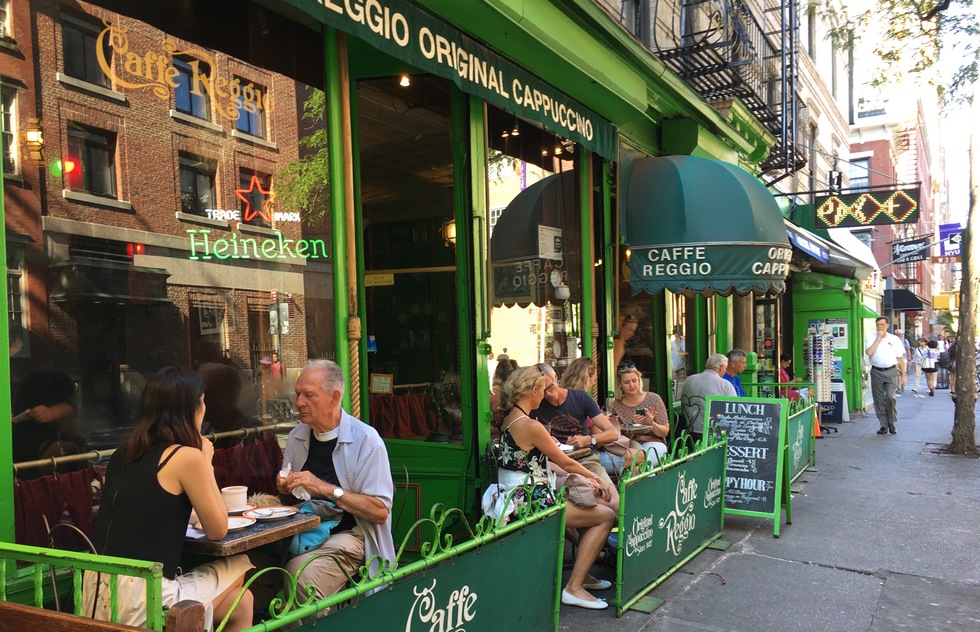 When you enter this art-filled Greenwich Village cafe, a mainstay since 1927, it’s impossible to miss the massive and ornate bronze-and-chrome espresso machine, always polished to a high gleam. Though no longer in use, it was one of the first of its kind, manufactured in 1902 and brought over from Italy by cafe founder Domenico Parisi. Caffe Reggio's current owners claim that the machine produced the first cappuccinos in the United States. In the Village's bohemian heyday, everyone from Jack Kerouac to Bob Dylan stopped by for a cup. You may have seen the place in the Coen brothers’ film Inside Llewyn Davis, shot here in 2013. 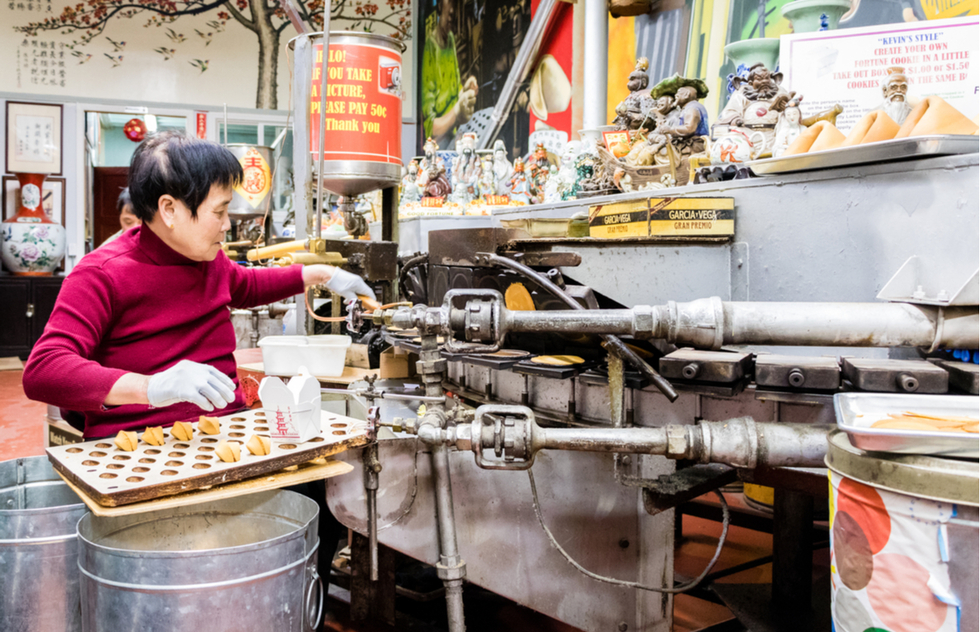 The fortune cookie is full of surprises—even beyond the news that you'll meet a mysterious stranger or soon take a long journey. For starters, fortune cookies are likely of Japanese origin, not Chinese. Journalist Jennifer 8. Lee traced the history to crackers sold in Kyoto—although the precursors are larger, more savory, and with messages placed in the outside fold rather than the interior.

Several Californians have taken credit for the American version, but the consensus is that it comes from San Francisco, home of a large and vibrant Chinatown. The Golden Gate Fortune Cookie Factory (which, to be clear, is not one of the claimants to introducing the treat) started crafting the dessert in 1962 for local Chinese restaurants. According to the company's website, the bakery, which is usually open for tours, cranks out as many as 10,000 cookies a day. 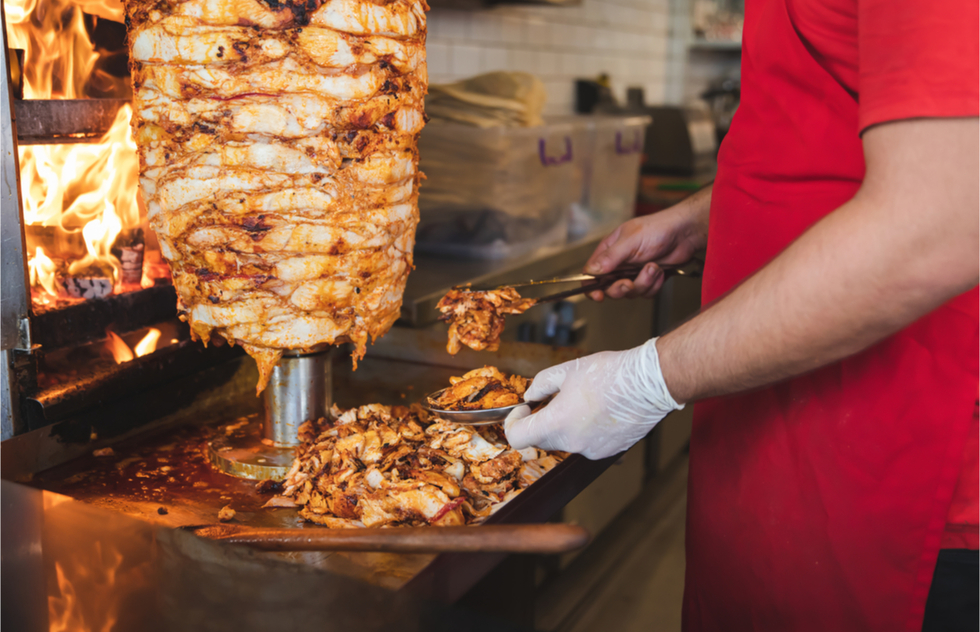 Across Europe, doner kebab is one of the most popular snack foods. The U.S. version is the gyro (pronounced "year-oh"), thinly sliced lamb, chicken, or beef from a rotating, vertical cone of spiced meat. Rather than spinning horizontally, the vertical spit—an innovation from the 1870s—allows the fat to run down the meat, flavoring it and keeping it moist.

With roots in the Ottoman Empire, the dish is thought to have spread from Turkey to Greece and from there to the U.S. by way of a man named George Apostolou, who opened the Parkview Restaurant in Chicago in 1964. Apostolou later founded a manufacturing plant to supply gyros to eateries across the country.

The dish is served either on a pita or a plate with lettuce, tomato, onion, and tzatziki yogurt sauce. 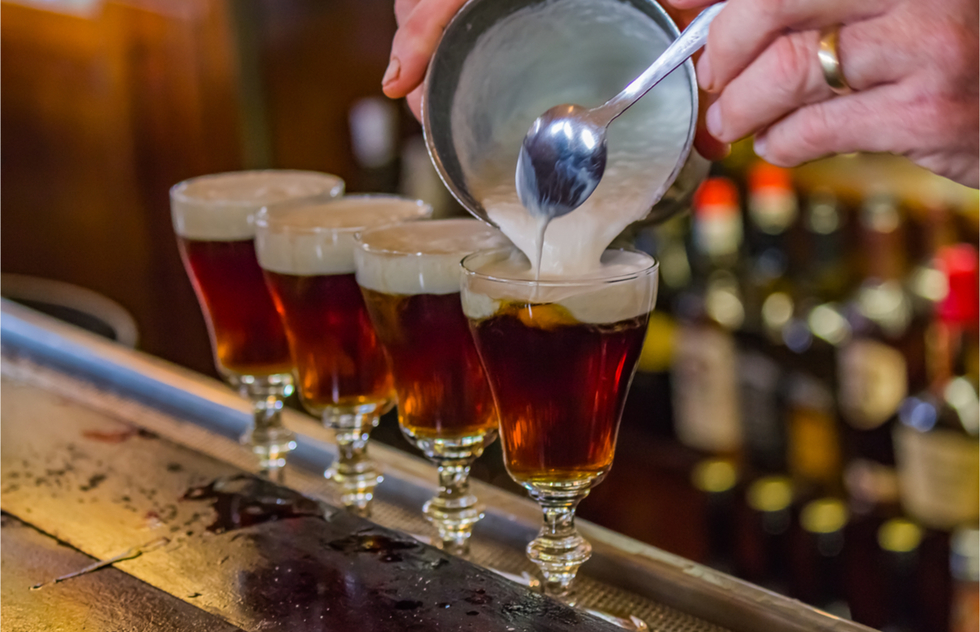 We love stories that have travel writers as heroes. Globe-trotting journalist Stanton Delaplane—yes, that was his real name—is credited, along with Buena Vista owner Jack Koeppler, with bringing Irish coffee to the United States.

Delaplane had tasted the whiskey-coffee combo at Dublin’s airport and was so impressed he asked the bartender for the recipe. Back in San Francisco, Koeppler and Delaplane had to experiment for months until they were able to make a successful copy. After finding a whiskey that complemented the java, they discovered that aging the cream for 48 hours would result in a froth that floated atop the drink rather than sinking.

A clip on the Buena Vista website features a veteran bartender explaining the process. He should have it down pat, having made over the years more Irish coffees than you could shake a shillelagh at. 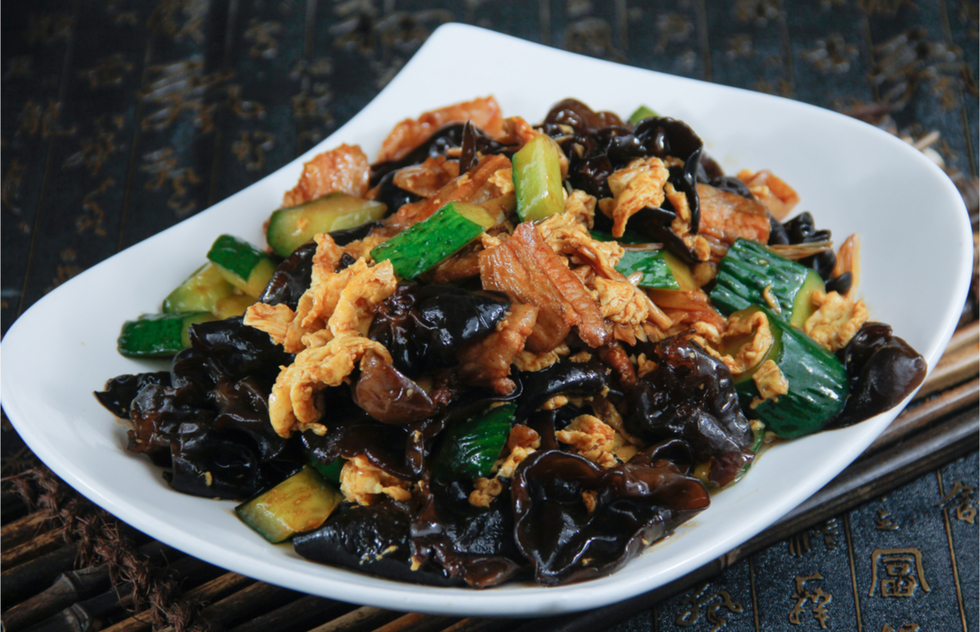 In 1882, the racist Chinese Exclusion Act, which forbade new immigration from China, stranded thousands of immigrant laborers in the United States without the families they had hoped to bring over. This tragedy led directly to the creation of the first Chinese restaurants, providing the mostly male Chinese-American population with nourishment and cultural connection. Cheap, convenient, and tasty, the restaurants soon attracted other Americans as well.

Enter Cecilia Chiang, who did more to shape contemporary Chinese cuisine in the United States than any other figure. In 1962, Chiang opened The Mandarin Restaurant, a more high-end venture than the usual Americanized Chinese joint and the first to introduce to the U.S. such Sichuan, Shanghai, and Cantonese specialties as potstickers, kung pao chicken, tea-smoked duck, moo shu pork, and sizzling rice soup.

Chiang, who died at age 100 in October 2020, was immeasurably influential on American cuisine in her own right—and her legacy continued into another generation when her son founded the P.F. Chang's chain of Asian-themed restaurants. 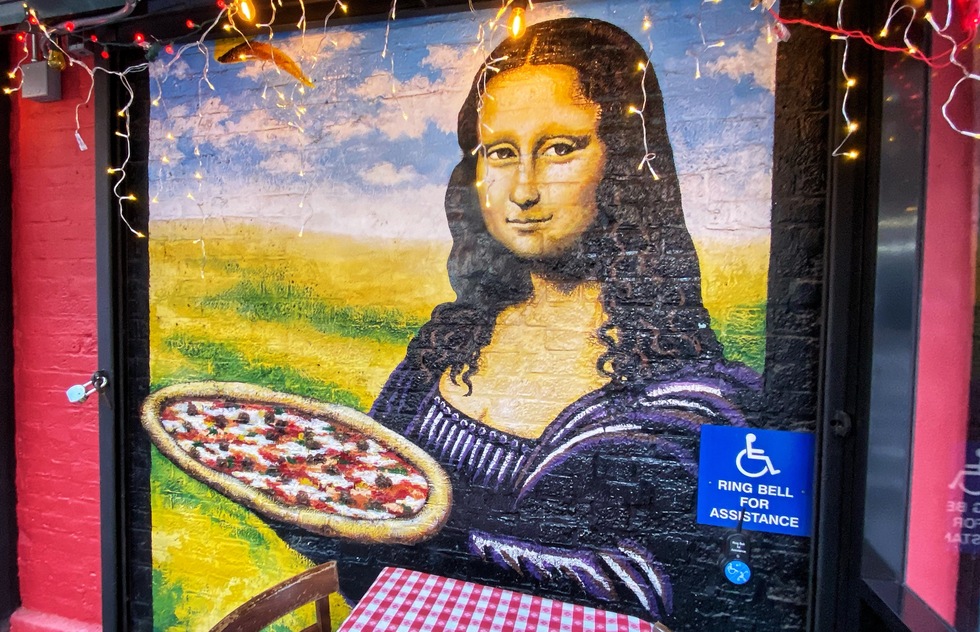 No, pizza didn’t come over on the Mayflower. The iconic dish was introduced in the late 19th century when waves of Italian immigrants landed on our shores. Some took to selling the pies on the streets, carrying the goods in washtubs on their heads and charging two pennies for a slice.

The first proper home for pizza was the grocery store Lombardi’s, which opened in 1897 and catered to local factory workers. The store's pizza lunches proved so popular that in 1905 owner Gennaro Lombardi decided to ditch the groceries and open a restaurant. Lombardi was from Naples, the birthplace of modern pizza, but he had to adapt that city's traditional recipe to fit with what he had: a coal-fired rather than wood-burning oven and cheese from cow's milk instead of buffalo mozzarella. The Lower Manhattan restaurant, which closed for a decade before reopening in 1994, uses the original 115-year-old oven. 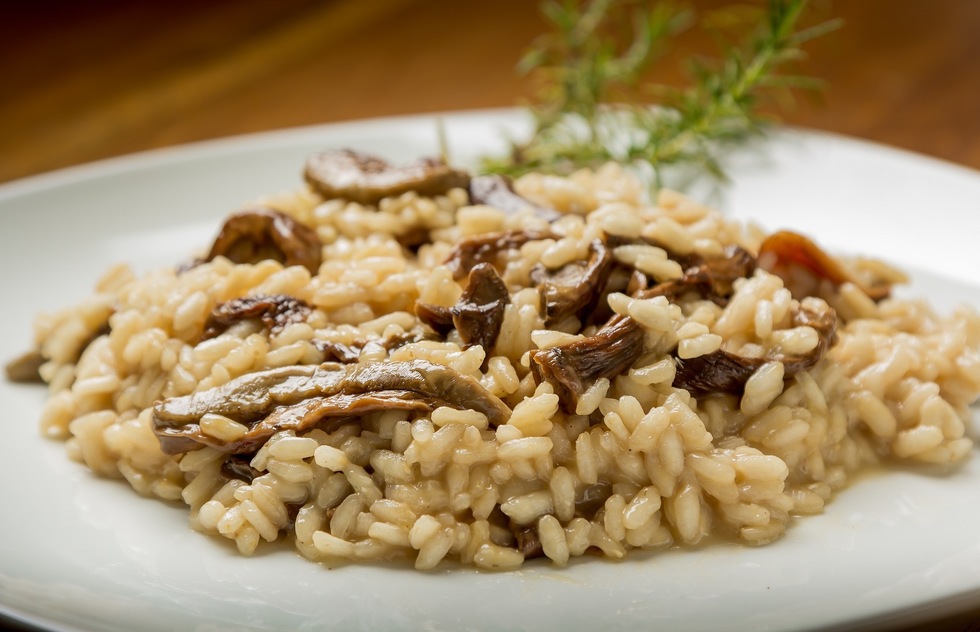 Opened in 1906, Barbetta was a pioneer in many ways. Not only is it thought to be the first U.S. restaurant to specialize in the food of the Piedmont region in northwestern Italy, but also Barbetta set an early example by giving Italian cuisine the white-tablecloth treatment. For decades, the palazzo-esque dining room, with its historic chandeliers, candlelit tables, and antique furnishings, has been a go-to for special occasions. In addition to introducing labor-intensive and elegant risotto to the American palate, the Maioglio family, who have been in charge of Barbetta from the start, also say they were the first in the U.S. to serve polenta, white truffles, wild porcini mushrooms, and sun-dried tomatoes. 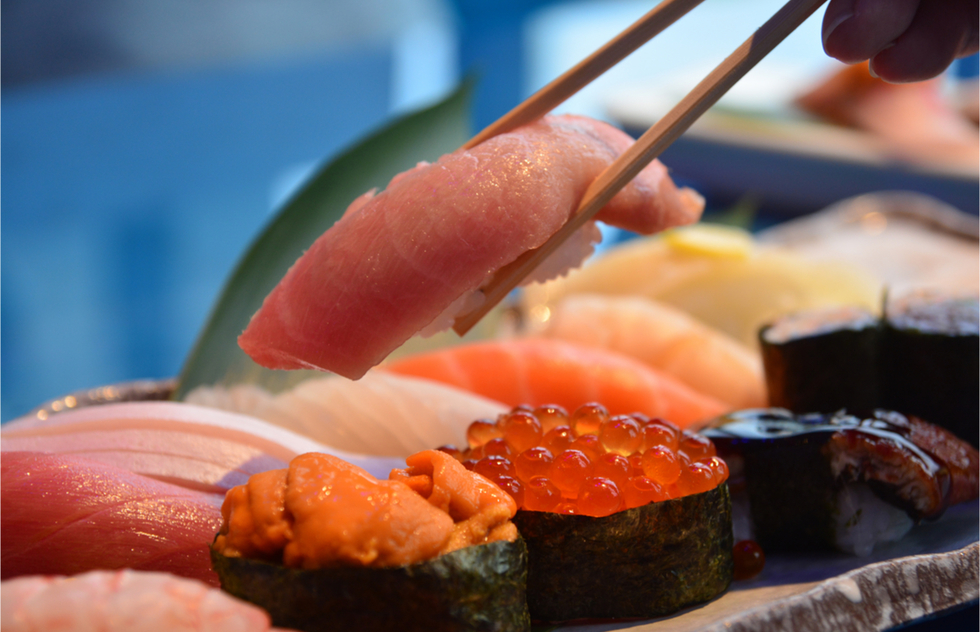 Sushi wasn’t totally unknown in early 20th-century America. A Los Angeles socialite apparently served sushi at a luncheon in 1904, according to a press mention. But the restaurant considered by most historians to be the first commercial sushi place in the U.S. was L.A.'s Kawafuku in the mid-1960s. Chef Shigeo Saito prepared traditional nigiri from local catches as well as the occasional giant clam and other specialties brought in from Tokyo’s famed Tsukiji Market. Saito’s wife waited on customers at the front of the house. The restaurant was located in the Little Tokyo neighborhood.

North American innovations like the California roll came later; click here to read about the origins of those and other all-American dishes.