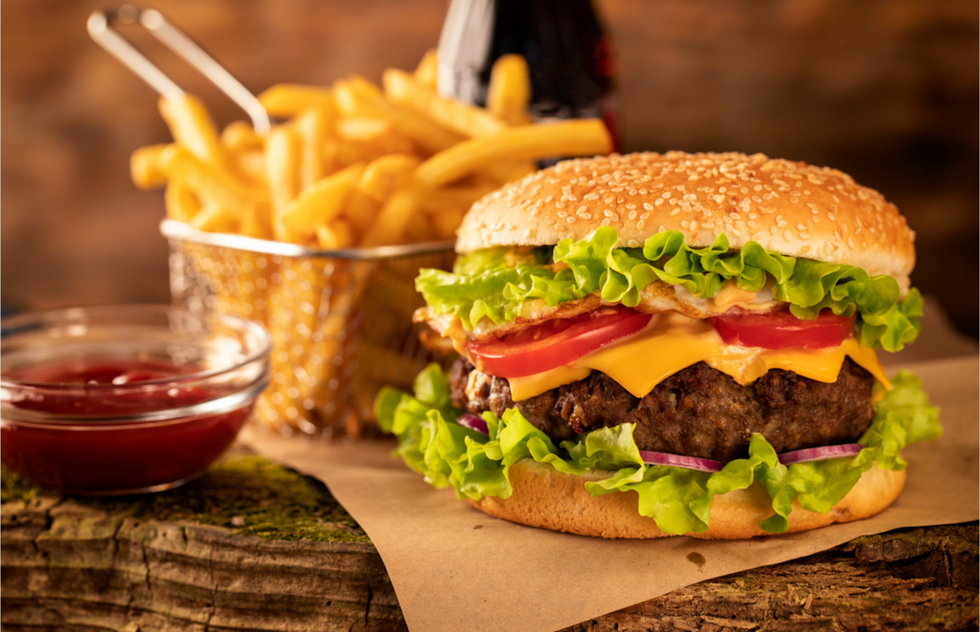 Try 10 Classic American Foods in the Places They Were Invented

Is there any meal as scrumptious as a burger with a side of crispy fries? Though those dishes and other classic American snacks, sandwiches, and desserts may taste like gifts from heaven, some human had to invent them (though we won't discount the possibility of divine inspiration where burgers are concerned). Many of the restaurants, shops, ice cream parlors, hotels, and bars where these culinary delights originated are still in business today—after all, having a great idea pays off.

We've put together a menu of all-American foods born in kitchens that continue to feed hungry diners from sea to shining sea—and, in one case, across the border in Canada. Because the past can be murky, there are competing claims as to the true inventor of certain dishes. But we’ve done our best to sift through the tales to find the most widely accepted originators.

Now belly up for some history! 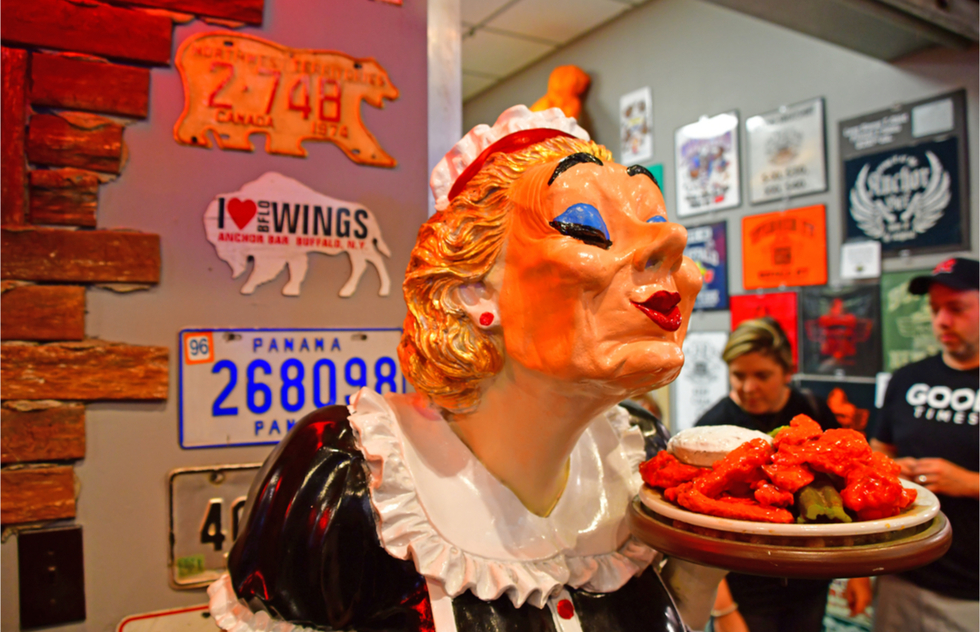 There was a time when restaurants didn't serve chicken wings. Considered too bony with not enough meat, they were usually just thrown into the stockpot to flavor soups and sauces.

That all changed late one night in 1964 at Anchor Bar in Buffalo, New York. Dominic, the son of owners Frank and Teressa Bellissimo, was tending bar when a group of his friends came in. They were hungry, so he asked his mother to whip up something quick. Teressa fried a batch of chicken wings, coated them with a spicy sauce—made up on the spot and still kept a secret—and served with a side of blue cheese and celery. A star was born. The wings were such a hit that the Bellissimos put them on the menu, and soon there were lines out the door.

Since then, there have been multitudes of imitators and wings have become synonymous with Buffalo—but to try the recipe that started it all, you have to go to Anchor Bar. 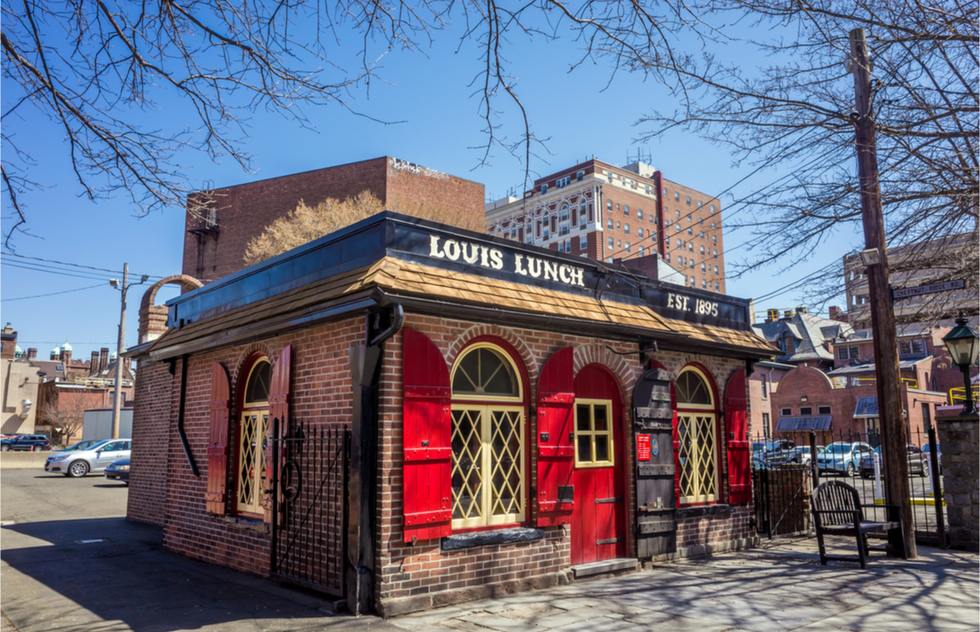 Yes, the hamburger sandwich was invented here. Just ask the Library of Congress, which has certified the claim.

The burger was created in a hurry, according to the fourth-generation family members who still run the place. Way back in 1900, the story goes, a gentleman rushed in and said he needed lunch to go. Owner Louis Lassen quickly put a heap of ground steak trimmings between two slices of toast and sent the fellow on his way. American cholesterol levels were never the same.

The hamburger served at Louis’ today is made from a proprietary blend of five cuts of meat and cooked on a cast-iron grill from 1898. When the meat reaches the customer's preferred level of pinkness, it's still put on toast and topped with up to three condiments: cheese, tomato, or onion. None of that fancy-shmancy stuff like pickles or lettuce here.

The eatery is so beloved that when it was threatened with demolition to make way for condos in the 1970s, fans paid for the building to be moved to its current spot, four blocks from the original location. 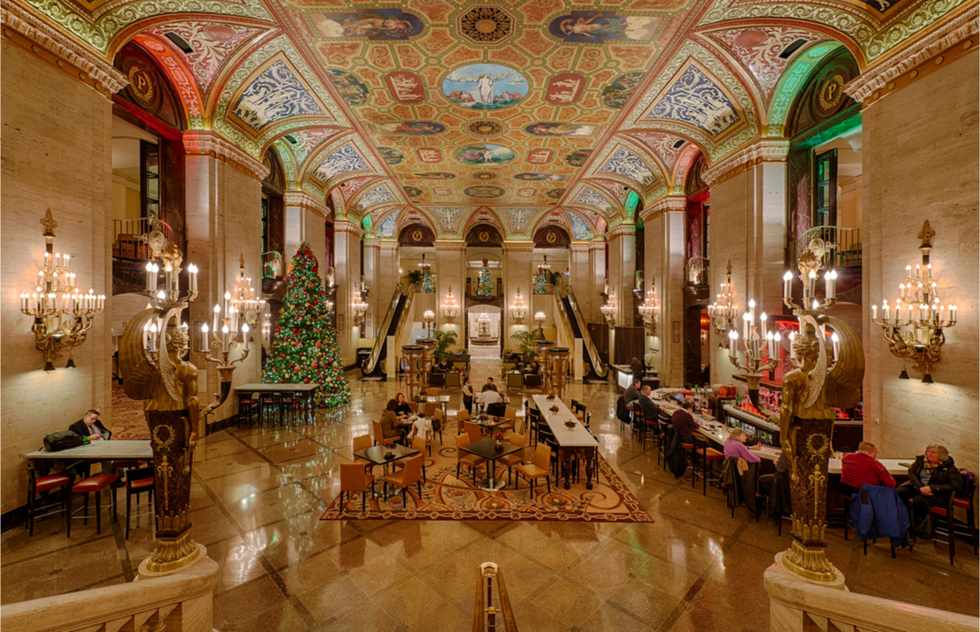 Several sources have called dibs on creating the brownie, but Chicago's Palmer House hotel does so the loudest and most convincingly. To this day, the historic property in the Loop offers guests brownies made from the recipe co-owner Bertha Palmer is said to have asked the pastry chef to make for socialites attending the 1893 World's Columbian Exposition. Palmer wanted a compact dessert that could fit in lunch boxes, resulting in a rectangular chocolate treat topped with an apricot glaze. Want to bake some of your own? Frommer's has the recipe. 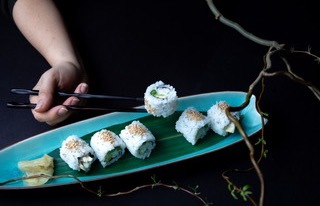 We have to look across the border for this contemporary favorite, which chef Hidekazu Tojo says he created in the early '70s. "When I came to Vancouver, most Western people did not eat raw fish . . . [or] seaweed," he told the Globe and Mail in 2012, "so I tried to hide it. I made the roll inside out. . . . A lot of people from out of town came to my restaurant—lots from Los Angeles—and they loved it. That's how it got called the California roll."

The classic version contains crab or imitation crab, avocado, seaweed, and rice. Tojo also claims to have had a hand in popularizing the spider roll and rainbow roll, and he came up with the B.C. roll, which incorporates smoked salmon. Frommer's has called him a "legend" who deserves credit for Vancouver’s "passionate love for the cool, clean flavors of sushi."

(Pictured is a Tojo roll, which is the next iteration of the classic California roll. It uses dungeness crab, and adds spinach to the classic) 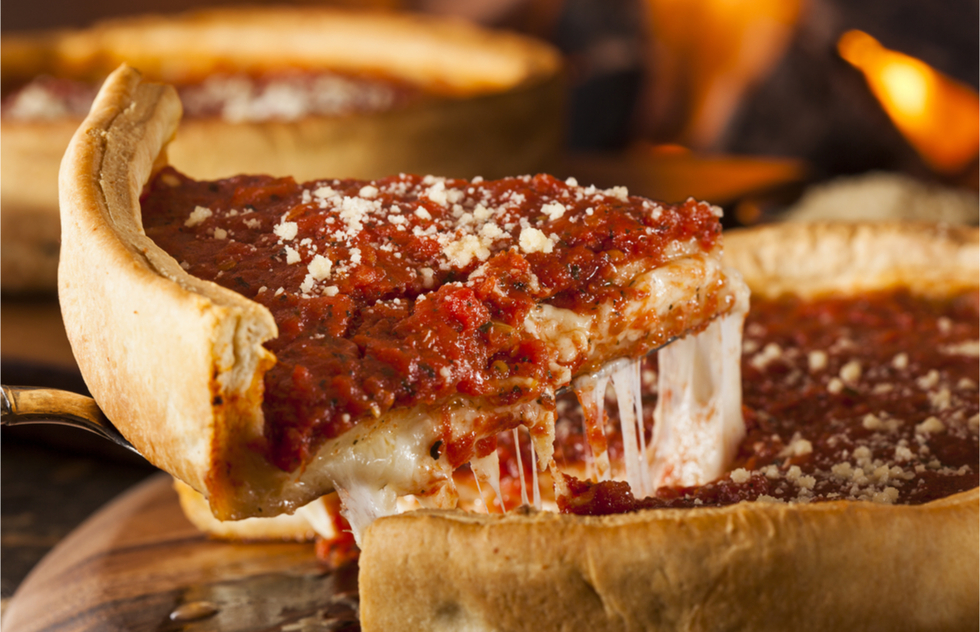 Pizza may well have been around since the ancient Greeks—they used the word pissa to refer to bread topped with vegetables. But it wasn’t until Chicagoans Ike Sewell and Ric Riccardo got involved in the food biz in 1943 that pizza truly became a pie. The pair opened the first Pizzeria Uno (now a chain), serving thick, almost casserole-esque pizzas that were cooked not on a flat tray in the Italian manner but in a circular pan with high sides. The dough was patted up the sides of the pans, and the usual mode of applying toppings was inverted, with mozzarella on the bottom of the vegetables and meats. A generous spread of tomato sauce crowns the doughy, gooey goodness.

The original location is still welcoming guests, with a second, Pizzeria Due, just across the street. Franchised restaurants elsewhere are known as Uno Pizzeria & Grill. 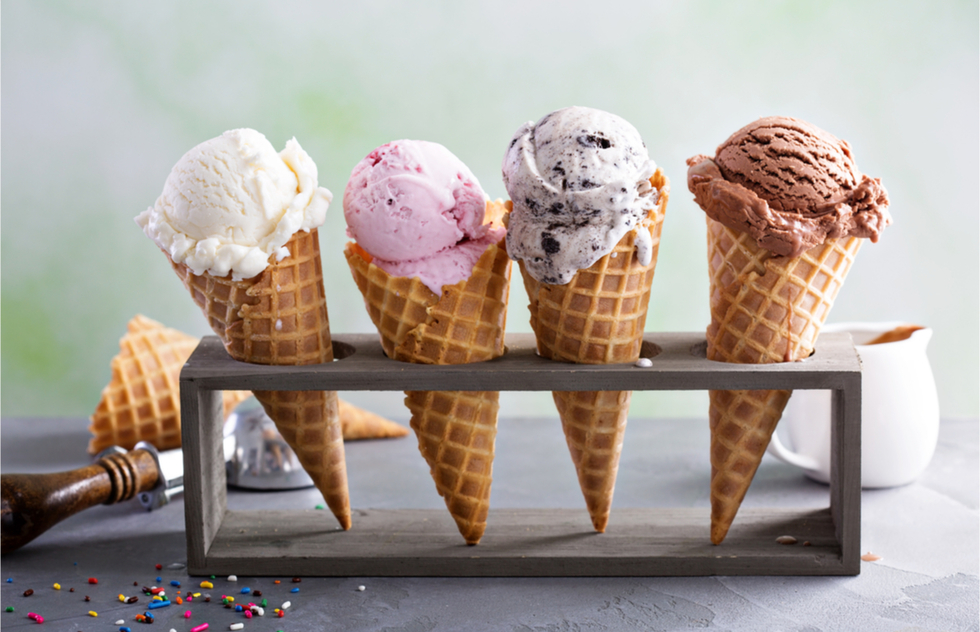 This most American of treats was created by Syrian immigrant Abe Doumar. According to company lore, Doumar, then a traveling salesman, was at the St. Louis World’s Fair in 1904 when he got a yen for ice cream. The vendor had run out of the paper plates he was using, so Doumar went over to a stand selling waffles, bought one of those, and shaped it into a cone to hold the ice cream. After tasting the ambrosial combo of warm waffle and sweet ice cream, the resourceful Doumar persuaded the two merchants to work with him on the new treat—and the trio became the toast of the fair.

Cut forward a year to Doumar opening his first ice cream stand at Ocean View Amusement Park in Norfolk, Virginia, where he also engineered the first waffle cone machine—a design that remains in use today. That first business become a chain of ice cream cone stands that later expanded into barbecue as well. 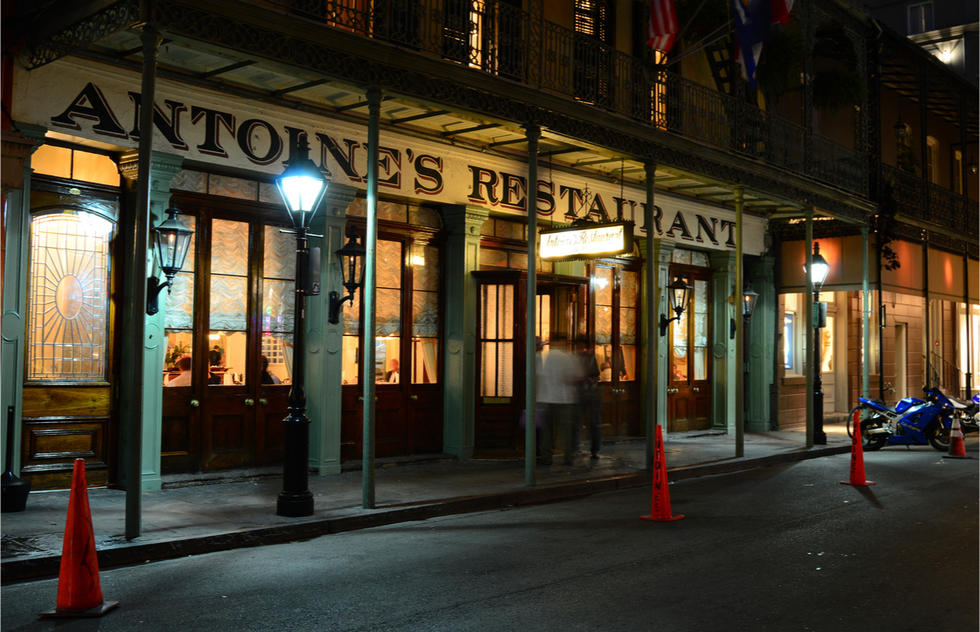 An escargot shortage led Jules Alciatore, son of restaurant founder Antoine Alciatore, to create this dish in 1889. Jules wanted something with the same flavor profile but needed a more readily available protein. In a nod to how rich the taste is, the name is a tribute to millionaire John D. Rockefeller. Antoine's version consists of oysters in the shell, swimming in butter and topped with a bright green mix of herbs and bread crumbs. Which herbs are used is a closely guarded secret—but unlike imitators, Antoine's does not use spinach. It’s possible that absinthe was originally part of the recipe, but not anymore. Frommer's author Diana Schwam says Antoine's is "as classic as New Orleans dining gets." 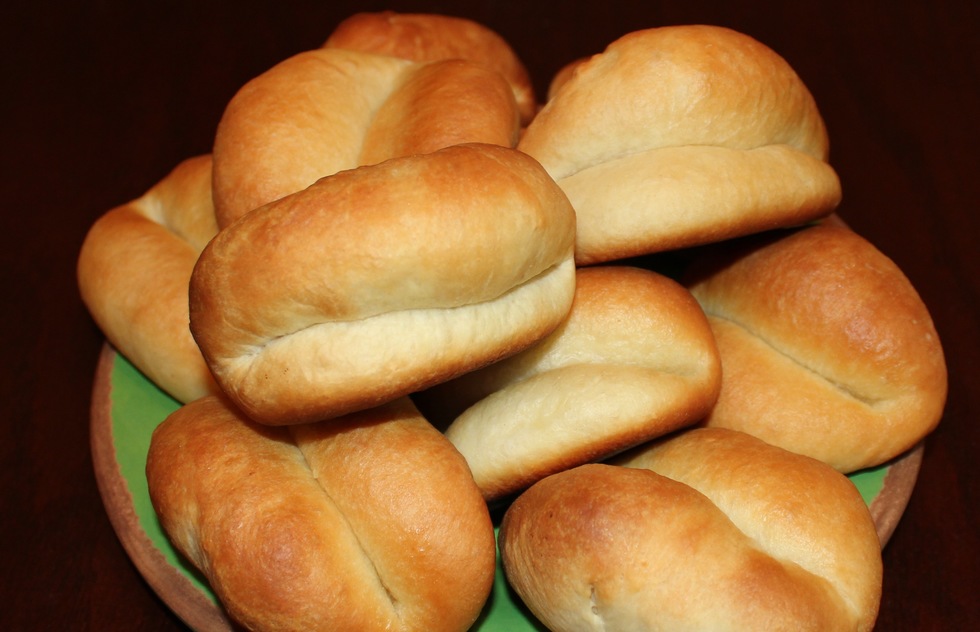 There’s no argument that these rolls were invented at their namesake hotel, but the origin story—that an irate hotel baker just globbed up and threw dough into the oven after an altercation with a guest—may be fiction. Still, the oddly folded shape of these buns gives them a unique crustiness on the outside and a marvelously moist interior.

The hotel, now known as the Omni Parker House, also takes credit for creating Boston cream pie. There are no tales of its creator lobbing the dessert at guests, though one mystery remains: Why is it called a pie when it's clearly a cake? 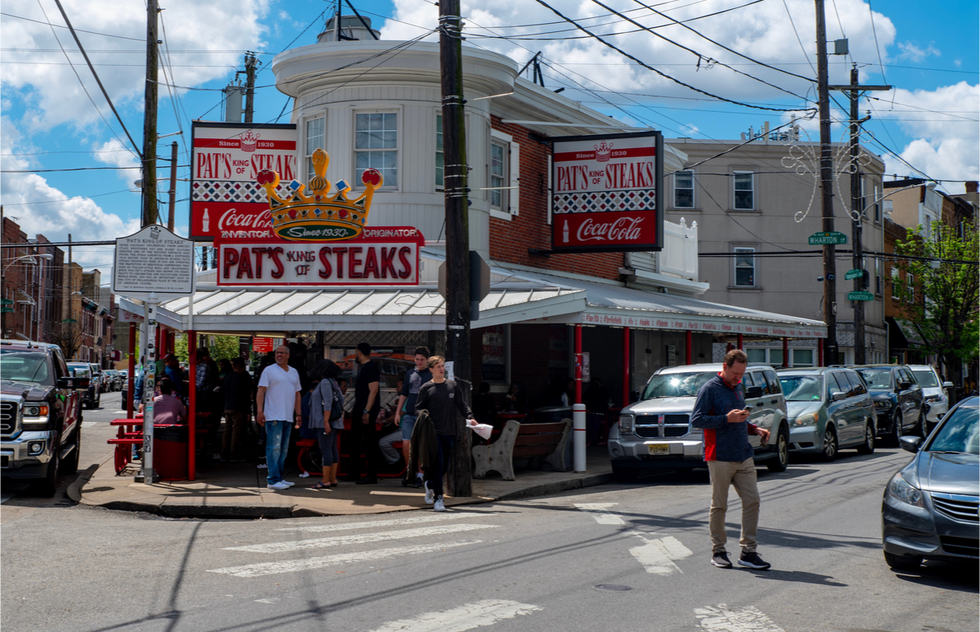 OK, this one is open to heated debate. But many sources say that brothers Pat and Harry Olivieri invented this locally beloved cheese-laden meat bomb when they were running a hot dog stand near South Philadelphia’s Italian Market in the 1930s. The sandwich started out with second billing to the franks, but cheesesteak sales soon took off, leading to the opening of Pat’s King of Steaks.

Served on a long crusty roll, the best known version of the sandwich features chopped beef, chopped onions, and either provolone or, for the true afficionado, Cheez Whiz. Pat’s is still owned and operated by the Olivieri family. When you go, wear something you don't mind dripping grease on. 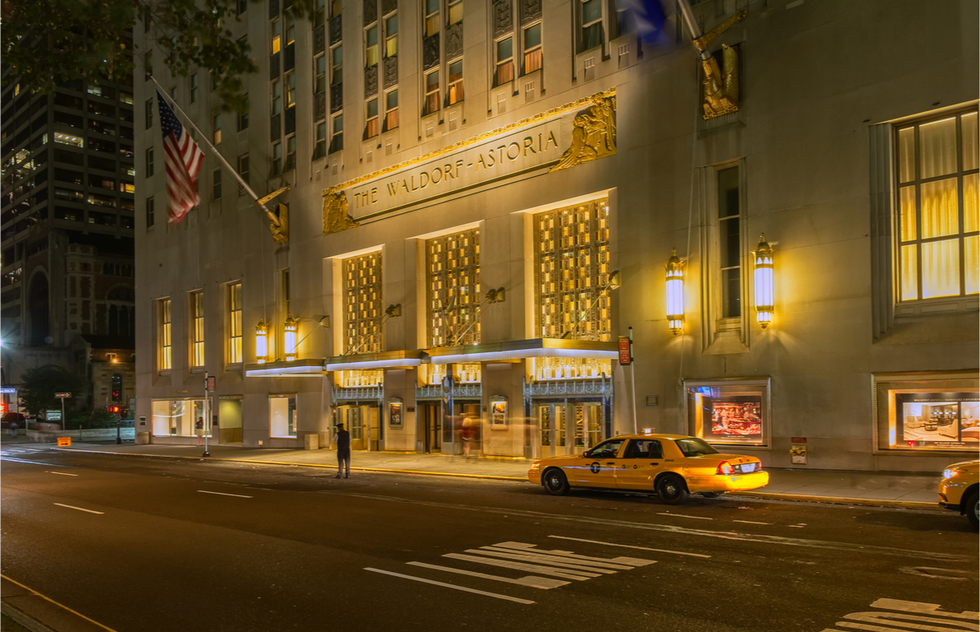 Surprise! Red velvet cake was not born in the South. Most agree the dessert was invented at this tony Manhattan hotel in the 1940s. Victorian-era “velvet cakes,” so named for their soft and smooth texture (achieved via the use of cocoa powder), served as inspiration. The Waldorf’s variety was created in response to World War II sugar shortages, which prompted bakers to subsitute beet juice—hence the reddish hue.

As of this writing, the Waldorf Astoria New York hasn't fully reopened from a multiyear renovation, so check in advance before visiting, especially if you have your heart set on trying this particular cake in its birthplace.