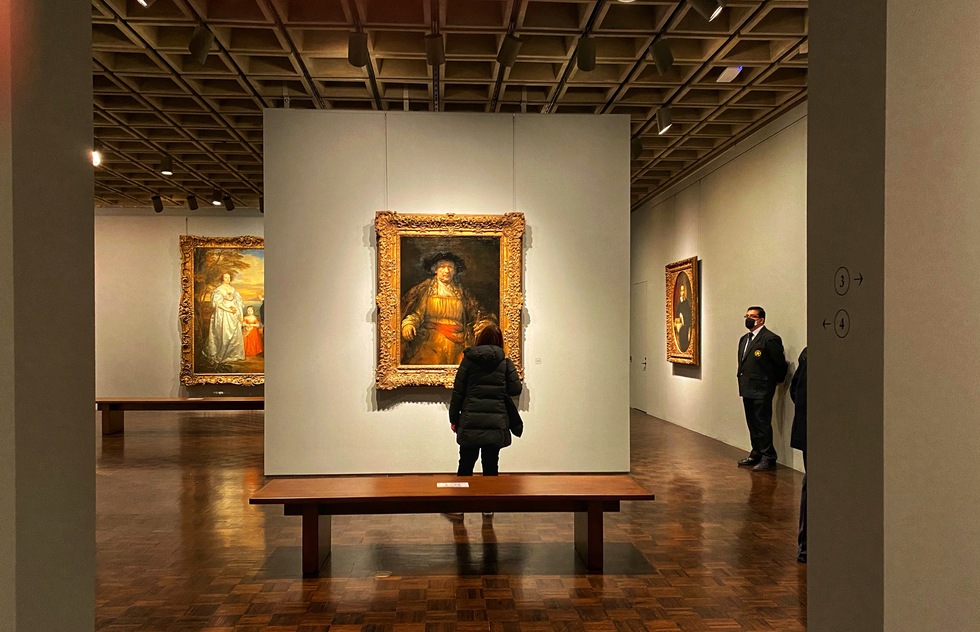 History's wealthy sleazeballs have been getting their comeuppance of late. The slave traders, labor exploiters, womanizers, and polluters who made fortunes in their day by being ruthless and then tried to do some P.R. damage control by leaving large bequests to cultural and educational institutions have had their names removed from buildings and their statues stashed in storage.

The exceptions are those who created their own temples of culture and learning rather than donating to an exisiting institution. That's one way to ensure the place is stuck with your name a lot longer. Take Henry Clay Frick, the union-busting industrialist whose sins include partial responsibility for the deadly Johnstown Flood of 1889.

New York City’s beloved Frick Collection has been housed for decades in the robber baron's ornate neoclassical mansion on Manhattan's Upper East Side. In addition to seeing the excellent art and furnishings, one of the fascinating aspects of touring the museum was imagining the lifestyle of the tycoon before his death in 1919.

But a long-overdue renovation begun in 2020 has shuttered the mansion for at least two years, and the collection has been moved temporarily a few blocks north to a building at 945 Madison Ave. that was originally created for the Whitney Museum of American Art (now at 99 Gansevoort St. in the Meatpacking District).

With its relocation, the Frick experience becomes less about the man and his mansion and more about the art and artists in the collection....which may be more appropriate for the times.

What follows is a brief guide to getting the most out of Frick 2.0, which is being called Frick Madison. 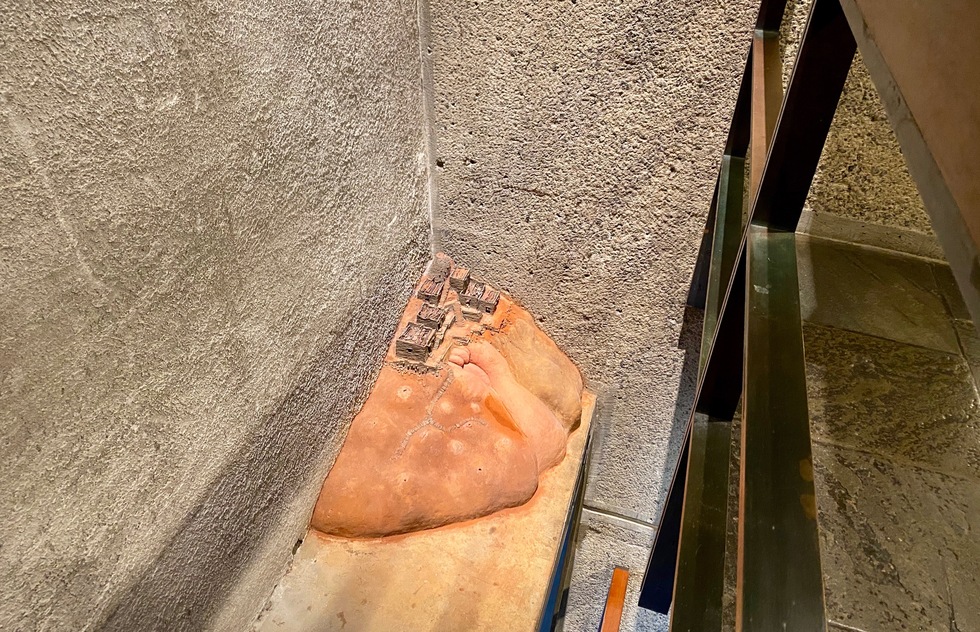 For its first few months at least, the Frick Madison won’t be using the gallery space on the first floor. So you’ll be starting your visit on the second story, which is devoted to German, Flemish, and Dutch art. I recommend climbing the stairs (if you're able), as that will immerse you in architect Marcel Breuer’s brutalist design. The cement walls of the stairwell are deeply pocked and rough, as if they were hewn for an ancient fortress.

The Frick has wisely kept on display one of sculptor Charles Simonds's small Dwellings pieces (pictured above). The miniature clay structure looks like a tiny adobe village between floors two and three. Emerging from this elemental space and entering galleries filled with the richly ornamented treasures of the Frick is an exciting perspective shift. 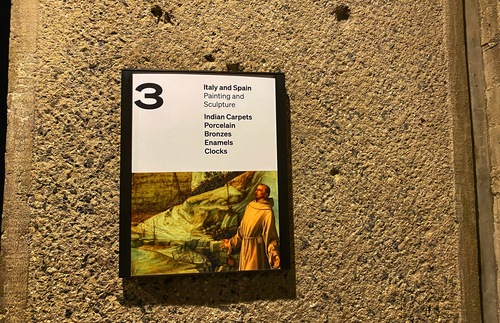 The curators are purposefully playing up the contrasts. "We decided to abandon the domestic setting of the house," museum director Ian Wardropper said at the press webinar for the opening. "Instead, we went for a very minimal, even Spartan look. . . . Our main hope is that you will rethink the collection and discover new art." 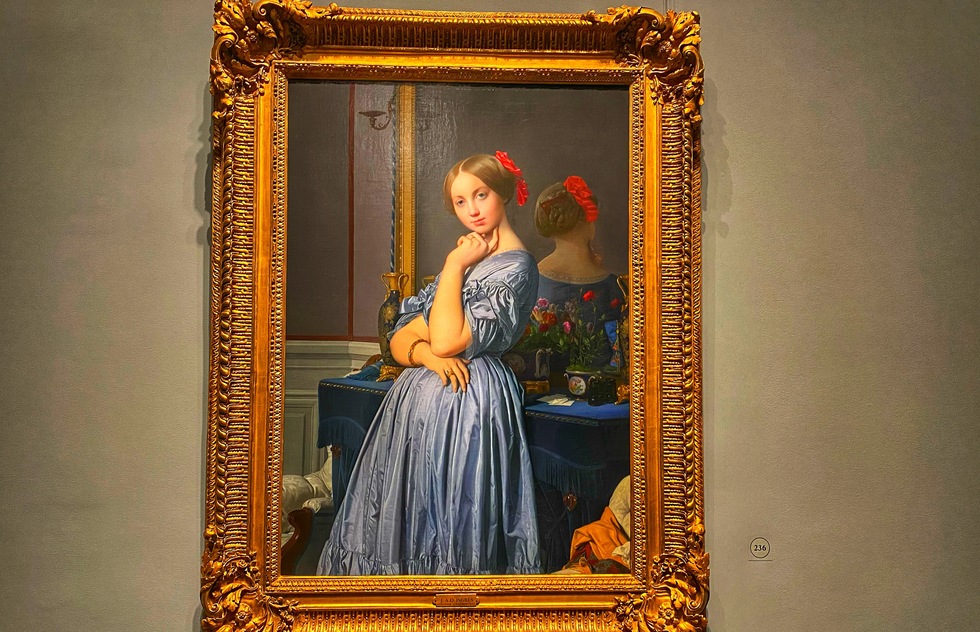 The museum's free mobile guide is available via the Bloomberg Connects app, which includes narrated exhibit information for a number of major museums. For the Frick Madison, curators Aimee Ng and Xavier Salomon fill you in on Ingres’ purposeful anatomical errors (like the arm coming out of the stomach of the Comtesse d'Haussonville, pictured above), Rembrandt's financial woes, and other intriguing back stories of the collection's art.

There’s commentary for almost every single work on display, so you won't find audio tourgoers all clustered around the same handful of exhibits. Instead, you can choose to hear about the pieces that intrigue you most. 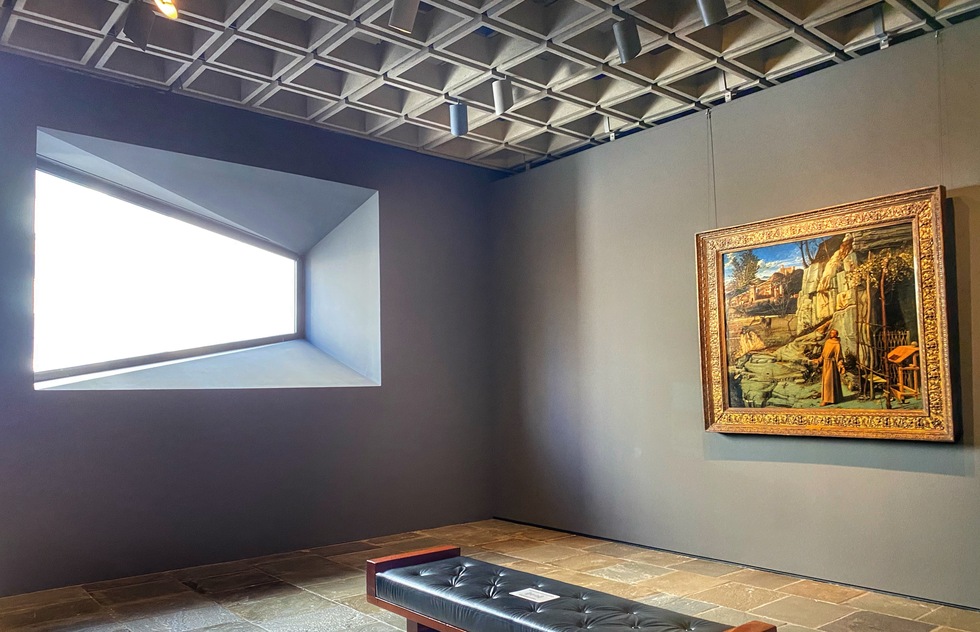 Pauline Frommer
Spread Out and Linger

Because there is more interior room here than at the original mansion, the curators have been able to do something rare in museum land—devote entire rooms to just one or two works of art. The layout underscores which pieces are considered the Frick's stars, allowing visitors to give them the time and attention they deserve. It’s like the curators are saying, Sit a moment with this work and let it affect you before you move on. And isn't that the way we should approach all art viewing?

In the room pictured here, the spread-out treatment is given to Giovanni Bellini’s St. Francis in the Desert. The curators have illuminated the 15th-century painting with light from one of the building’s iconic trapezoidal windows, echoing the way Bellini bathes his subject in divine light. When I visited, the room felt serene, the sense of concentration palpable as visitors gazed at the bucolic scene on the canvas. The experience becomes meditative, restorative, and unusually apt for this ferociously beautiful work. 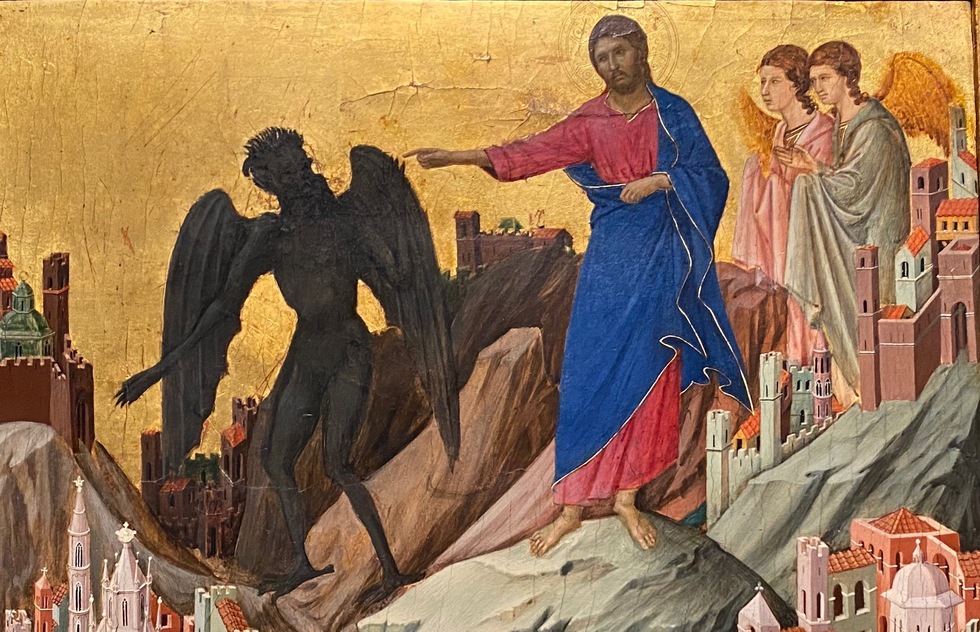 Pauline Frommer
Get Close While You Can

You’re not imagining things: You can get closer to the art at the Frick Madison than at most other museums. Almost no paintings, sculptures, or other works are behind glass. At the Frick mansion, tables, chairs, and bureaus set below paintings kept viewers at a distance. But in the Madison space, visitors can come within an inch of the art. Though there are guards around, none of them seemed worried by close inspections—and it’s a delight to examine brushstrokes, cracks, and other details. 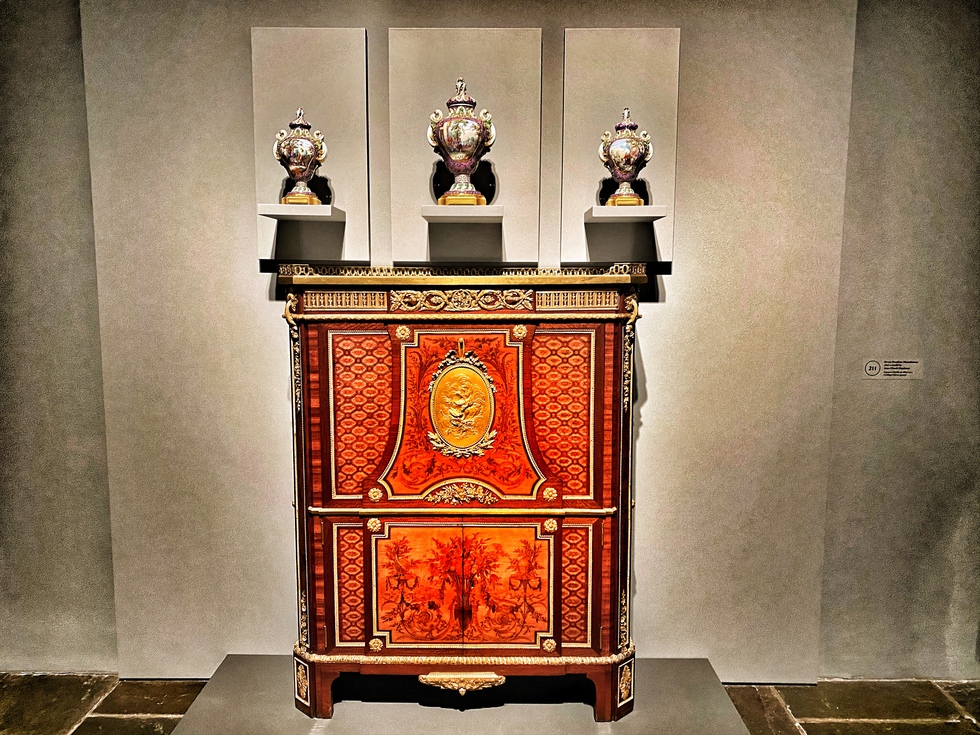 Now that the art has been decoupled from the mansion's furniture, visitors are better able to appreciate the extraordinary artistry of the vases, dressers, tables, chairs, and other decorative pieces in the collection. According to curators, gallerygoers in the past were often so mesmerized by the art on the walls they’d forget to look at what was below.

To correct that oversight and encourage closer examination, staffers have given a deliberatively underlined display to objects (such as the three vases pictured above) that would ordinarily grace shelves and cabinets. The exquisite marquetry secretaire pictured here was created for Marie Antoinette by German artisan Jean-Henri Riesener. The piece was such a favorite of hers she had it reworked when she moved châteaus so that it would fit in the new place. 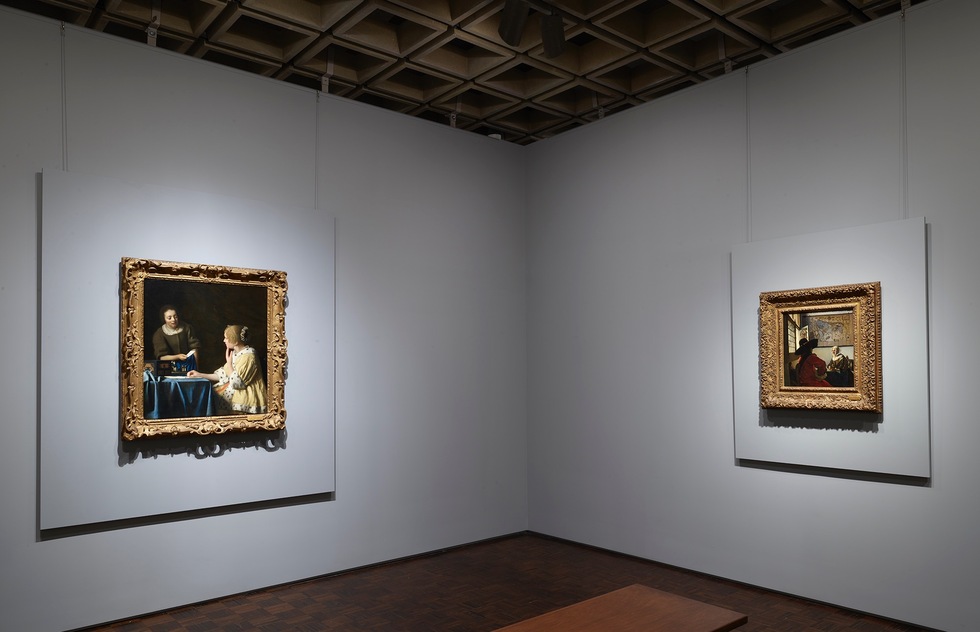 Only 34 extant paintings can be firmly attributed to 17th-century Dutch master Johannes Vermeer—and the Frick has 3 of them (2 are pictured above). In addition, the collection holds some of Rembrandt's most important portraits as well as seminal works by El Greco, Hans Holbein, John Constable, J.M.W. Turner, Ingres, and others.

But those works are always on display. The Frick's new setting has allowed curators to surface items that aren't usually exhibited. The mansion’s famous Fragonard Room, for instance, couldn't show off all of that French artist's wall panels due to space constraints. But the full complement is here. The same goes for the Frick’s porcelain collection, which have been given a dazzling, color-coded arrangement—an eye-popping 18th-century convention. Many other rarely seen works are also placed front and center at the Frick Madison.

For more information and to purchase tickets, visit Frick.org/madison.