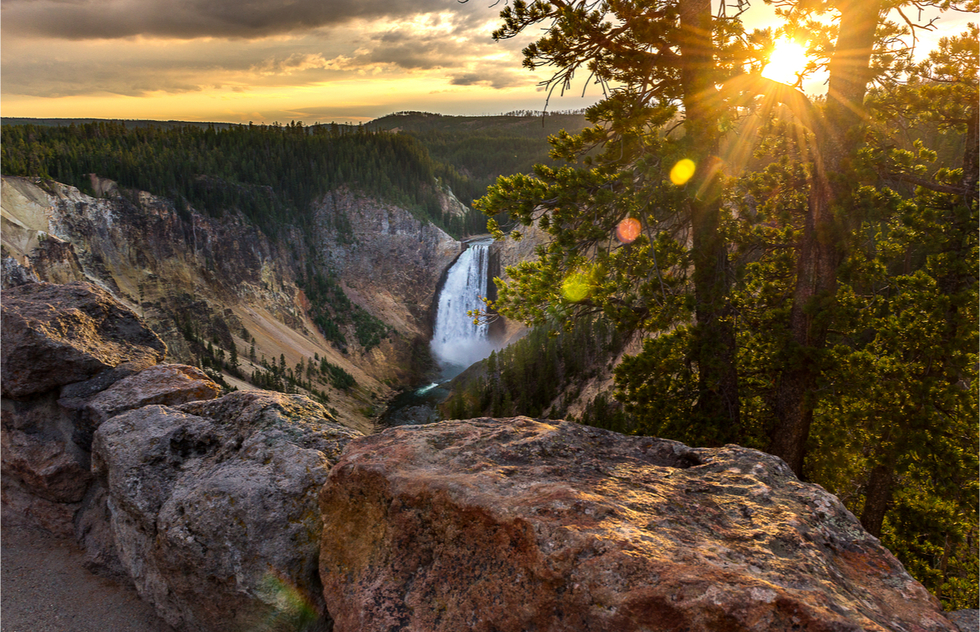 The Best U.S. National Parks to Visit in Summer

Which of the USA’s national parks are at their best in summer?

Not all of them. Some get overcrowded and others get overheated (or overcrowded and overheated). If you're looking to avoid the first problem, we've gathered some of the lesser-known parks—places that never get crowded, even in high season, and remain comfortable, weather-wise, despite the calendar. But we’re not neglecting all of the popular and steamy options. There are some parks that are worth visiting even among the summer throngs and triple-digit temps because it’s only in June, July, August, and September when certain areas are open or certain natural phenomena are occurring.

Here are our 10 favorite national parks for summer. 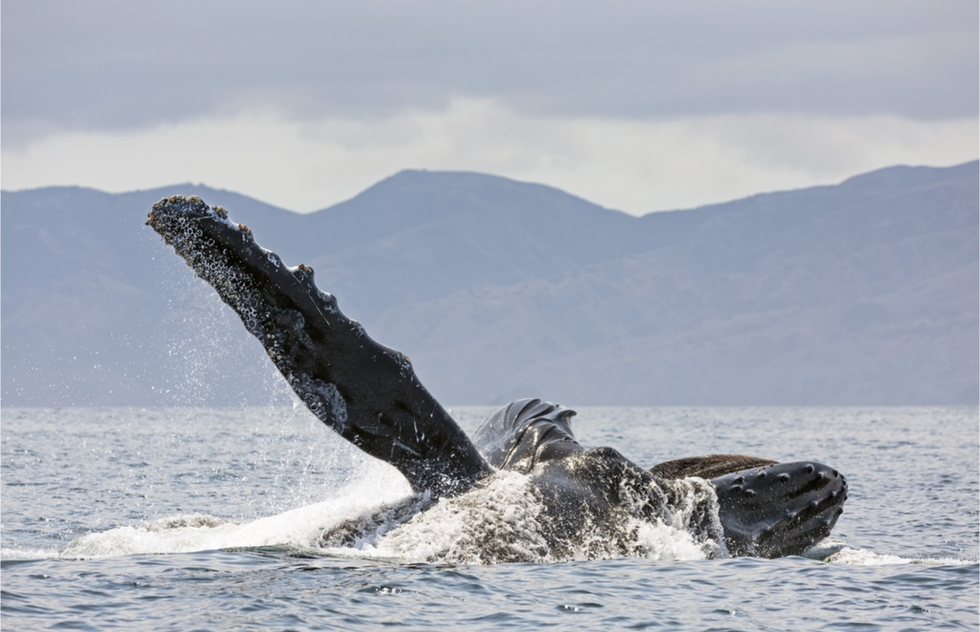 On land and at sea, there are few better places for animal lovers than the Channel Islands in summer. The park, which consists of five islands out of an eight-island chain, sits off the Ventura coast north of Los Angeles. Around 2,000 species of plants and animals—including some found nowhere else on earth—live here. Credit the National Park Service for saving one of the rarest critters, the island fox. A third smaller (but even cuter) than its nearest relative, the gray fox, the island fox might be spotted dashing across your hiking trail—a common occurrence now that the species has regained sustainable population numbers.

The waters around the islands are also protected, in part because they serve as temporary home for a full third of the world’s cetacean species. There are few better places in the world for whale watching, especially in July, August, and September, when blue whales and endangered humpback whales take up residence.

The islands are important to human history as well. A 13,000-year-old skeleton—the oldest ever found in North America—was unearthed here, and archaeological evidence shows that these islands have been inhabited since the Ice Age. 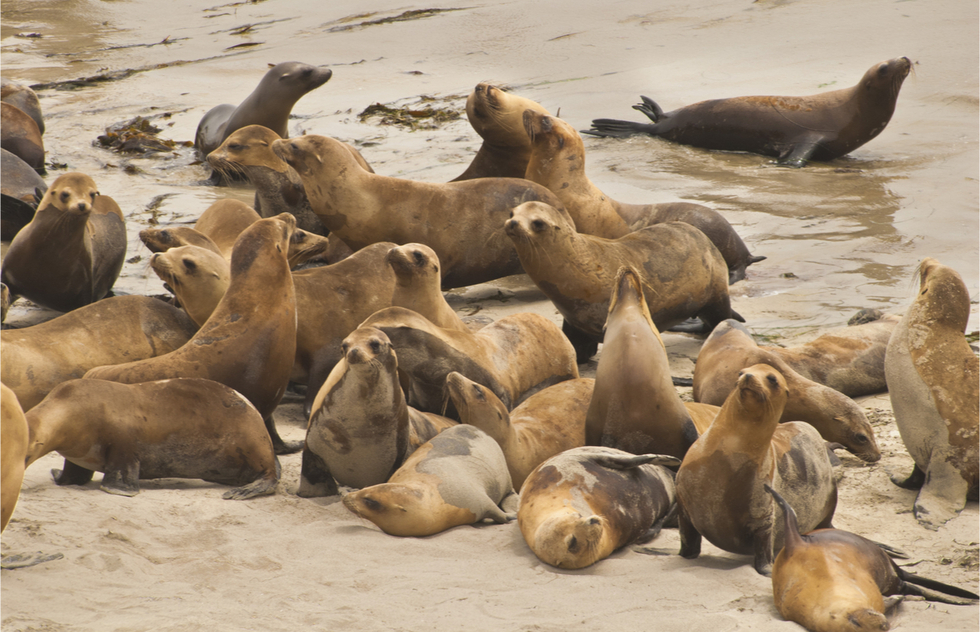 Getting here: Most take a boat from the mainland, either from Ventura or Oxnard.  The length of the ride varies, depending on which island you’re visiting. Santa Cruz, the largest and closest island, can be reached in about 90 minutes from Ventura. Remote Santa Rosa requires a 4- to 5-hour ferry trip. There are also some flights to the Channel Islands.

Caveats: There are no visitor centers on any of the islands; that means you won't have access to many of the services at other parks. The main facility for visitors is in Ventura. A small satellite office in Santa Barbara also has some information. 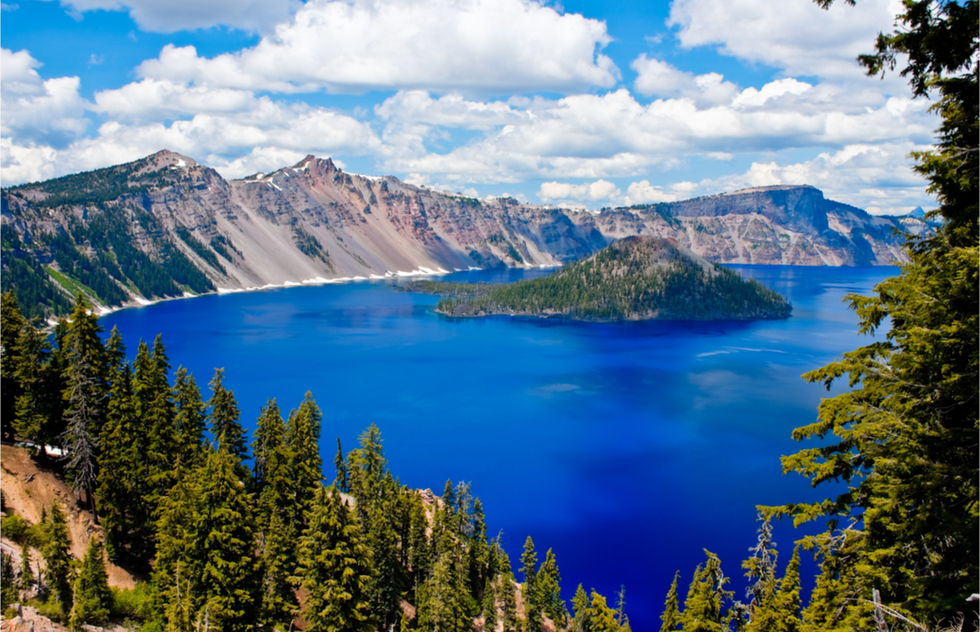 It's difficult to visit this dazzling park any time but summer because of the elevation and weather patterns. Crater Lake National Park gets 44 feet of snow most years, and the roads along the rim of the lake are not plowed. The snow usually starts falling in October; the park’s Rim Visitor Center is only open from June through September.

The centerpiece is one of the deepest lakes on earth, formed 7,000 years ago when a volcano erupted and then collapsed, leaving a caldera 6 miles wide. The lake goes to a depth of over 1,900 feet. What’s most striking, though, is the water's vivid shade of royal blue. Because the lake isn’t fed by streams, it has few floating particles, resulting in the remarkable clarity. 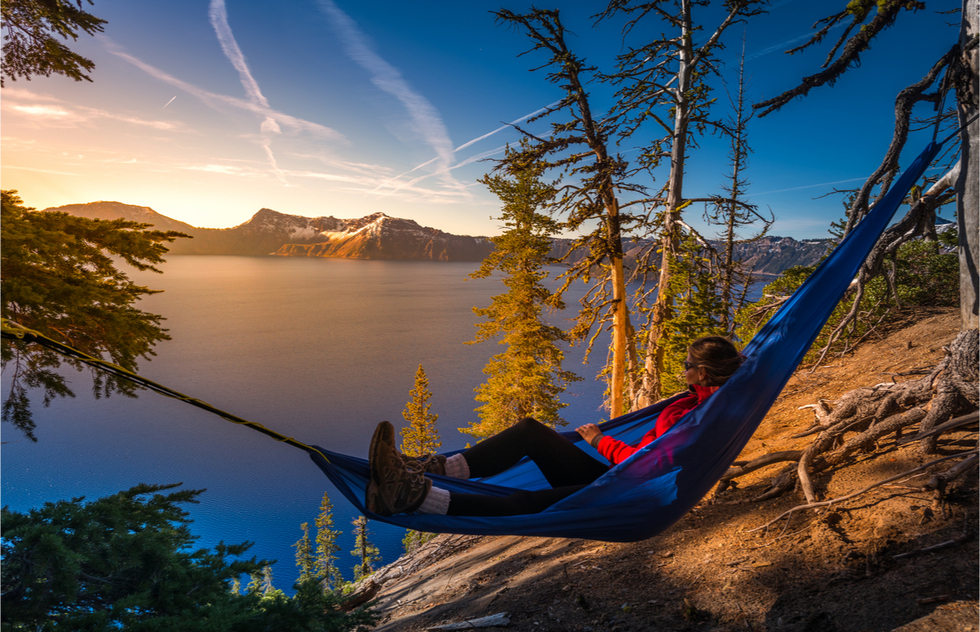 Top activities: scenic drives along the 33-mile rim, hiking, boat tours, wildflower gazing, and swimming (if you can stand the frigid water temps)

Getting here: From Medford, take the 75-mile drive on Oregon's Route 62. 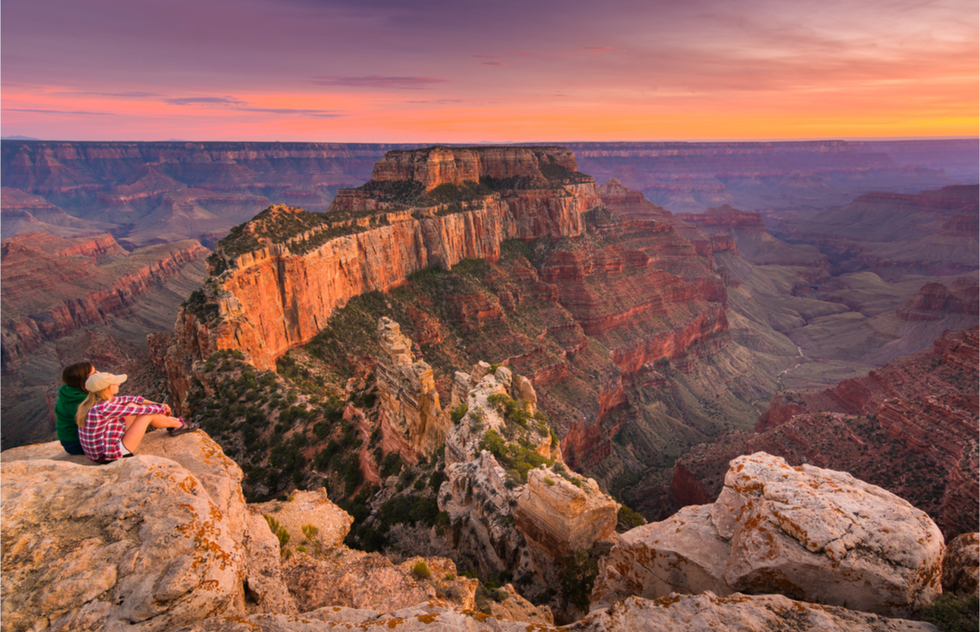 This massive, multifaceted hole in the ground is open year-round, though visitor numbers are highest during summer. It's worth braving the crowds during the busy season, though, because that's when the majestic North Rim is open and when the rafting on the Colorado River is, arguably, most exciting.

On the rafting front, the white water reaches its peak during July and August because that's when the Glen Canyon Dam releases more water than usual to power the electrical grid that keeps air conditioners whirring. As the dam feeds into the Colorado River, the water—also affected by afternoon thunderstorms—gets higher and faster than usual. So if you're not an adrenaline junkie, you might want to go earlier or later in the rafting season, which runs from April through October.

As for the North Rim (usually open only from May through October due to snowfall), it's less touristy than the South Rim, with its IMAX movies, fast food franchises, and helicopter rides. And because the North Rim is farther from Phoenix and Las Vegas, this part of the park gets fewer visitors, too. Other reasons to love the north: It’s 1,000 feet higher than the South Rim, resulting in an alpine climate with large meadows and dense forests of ponderosa pines, Douglas firs, and aspens. 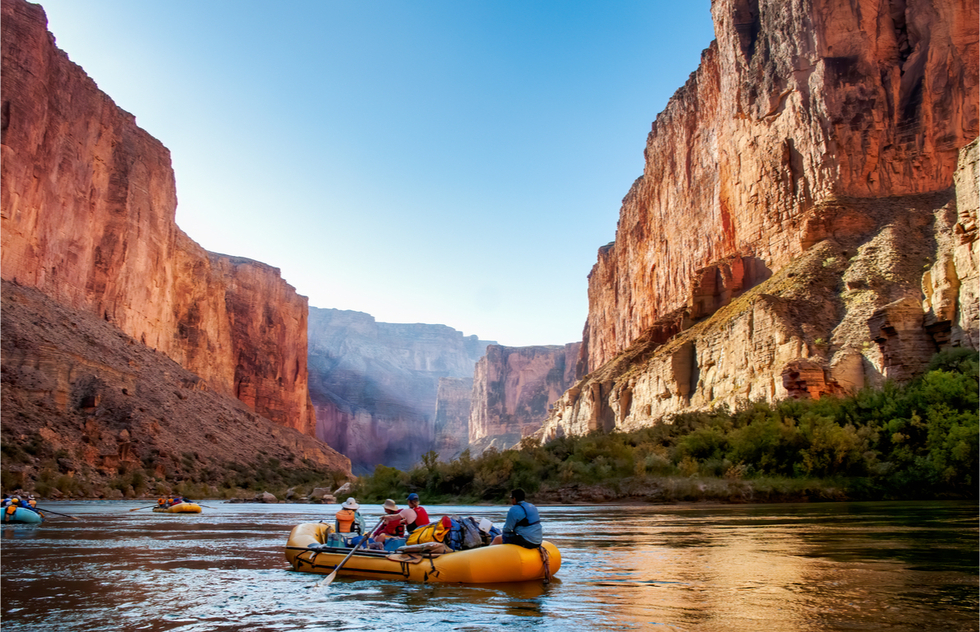 Top activities: hiking, rafting the Colorado River (click here to see the companies we recommend), mule rides, ranger programs on everything from geology to Native American history (get our full guide to the park here)

Getting here: The North Rim is about a four-hour drive from Flagstaff. It’s at the end of Arizona's State Route 67, also known as the North Rim Parkway. 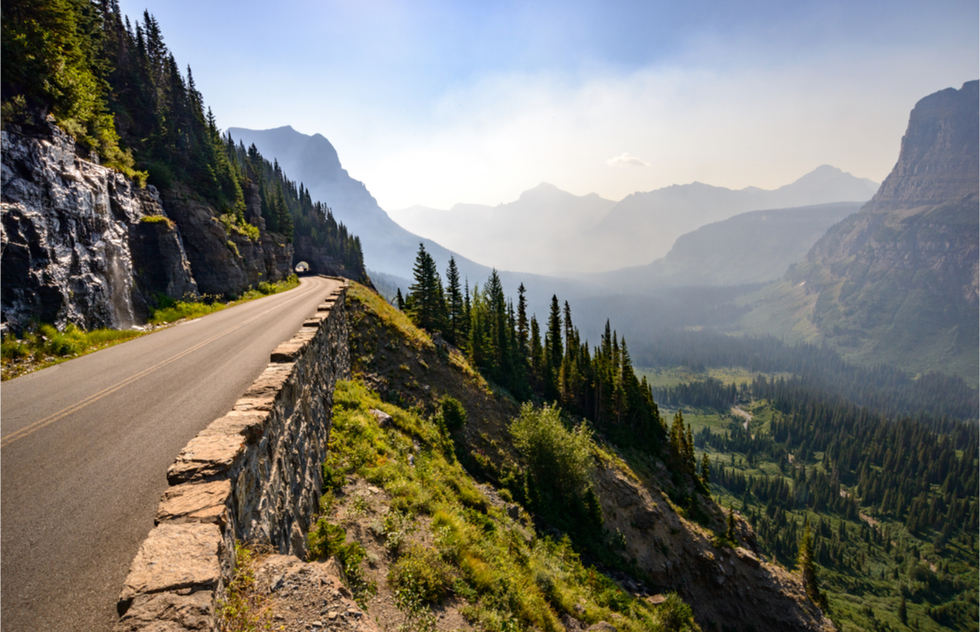 In the 19th century, this park was packed with 150 glaciers. Today, there are a sixth as many, and scientists say all the ice could be gone by 2030. So this is a see-it-while-you-still-can opportunity, and one that is best realized in summer. That’s when you’ll be able to drive one of the most scenic routes in the national park system, the Going-to-the Sun Road (pictured above), which doesn’t open until mid-June because of the amount of snowfall here.

To see a glacier up close, get ready to hike. None of the slabs of ice are right off the road, and most involve at least a mile and a half of tramping. The National Park Service has a concise guide to glacier viewing. Other noteworthy sights include birds, wildflowers, waterfalls, lakes, and streams. 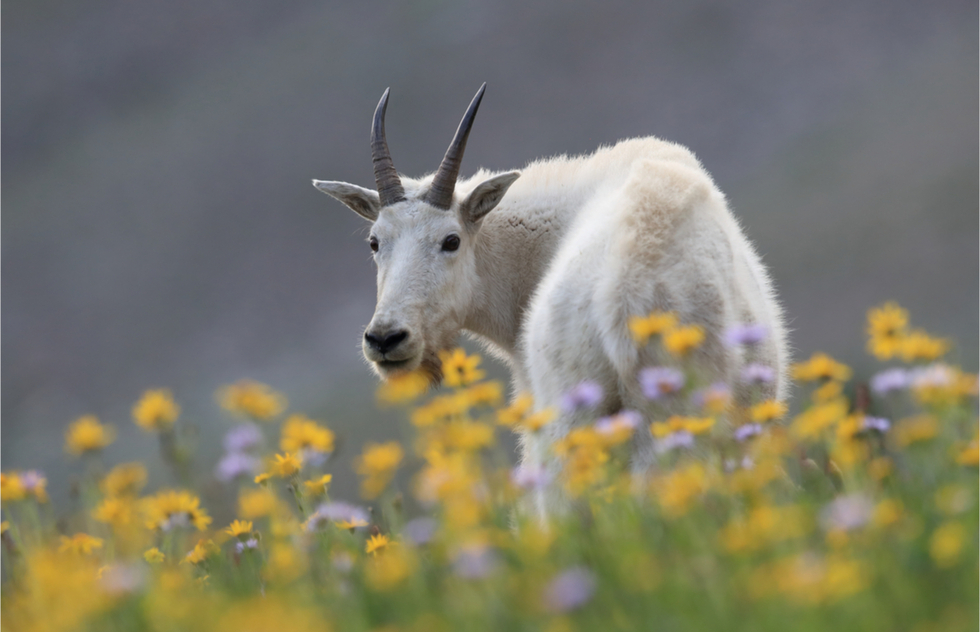 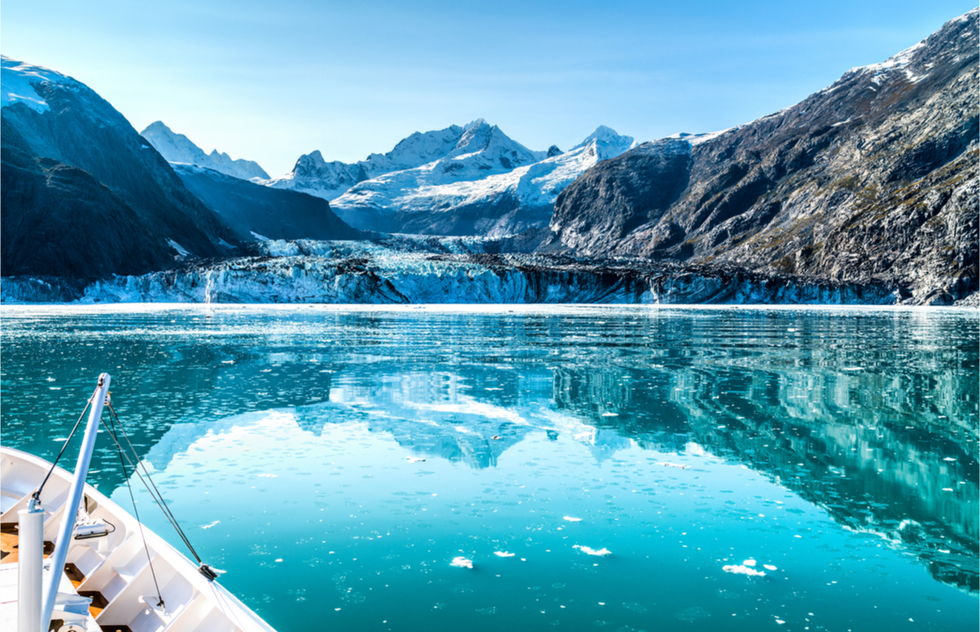 Here are some more icy wonders to see before they’re gone. In Conor Knighton's Leave Only Footprints, a best-selling account of a year spent exploring U.S. national parks, the author writes that Glacier Bay's 65-mile fjord "features giant tidewater glaciers—magical fortresses of frozen water more blue than white. Approaching them by boat, they look like something out of Game of Thrones—massive walls of ice stretching a mile wide and soaring hundreds of feet high, impossible to scale. Not that you’d ever want to try climbing one. Giant chunks of ice regularly 'calve' and break off into the sea below, a regular highlight and threat for the boats full of tourists forced to stay thousands of feet away."

While most visitors see the park on giant cruise ships, it’s possible to take a ferry to the town of Gustavus and camp in the park. Gustavus is the jumping-off point for hikes and kayaking excursions, too. 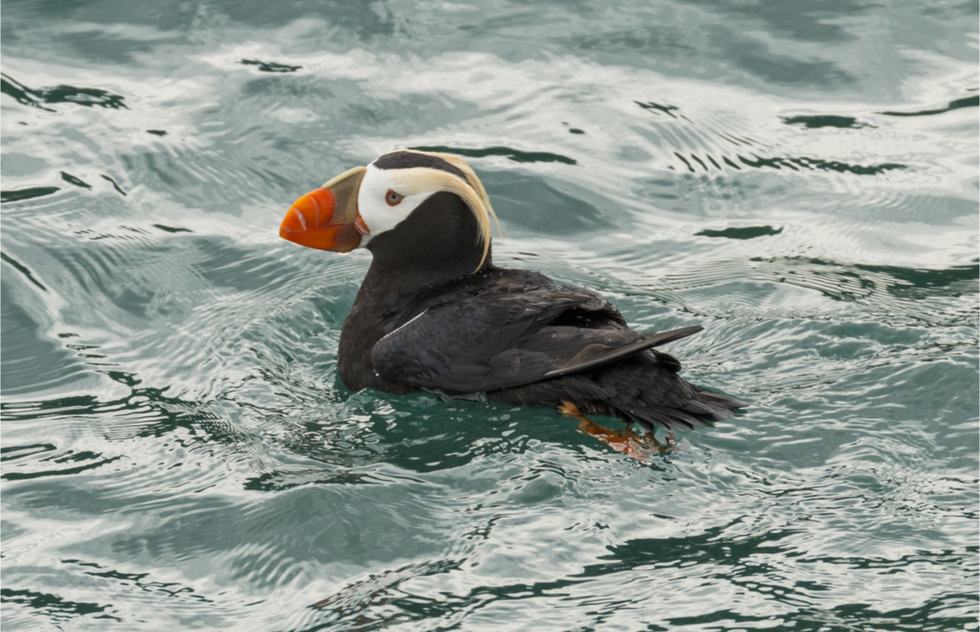 Getting here: If you're not on a cruise ship, you'll need to take the Alaska Marine Highway, courtesy of the state-run ferry system. 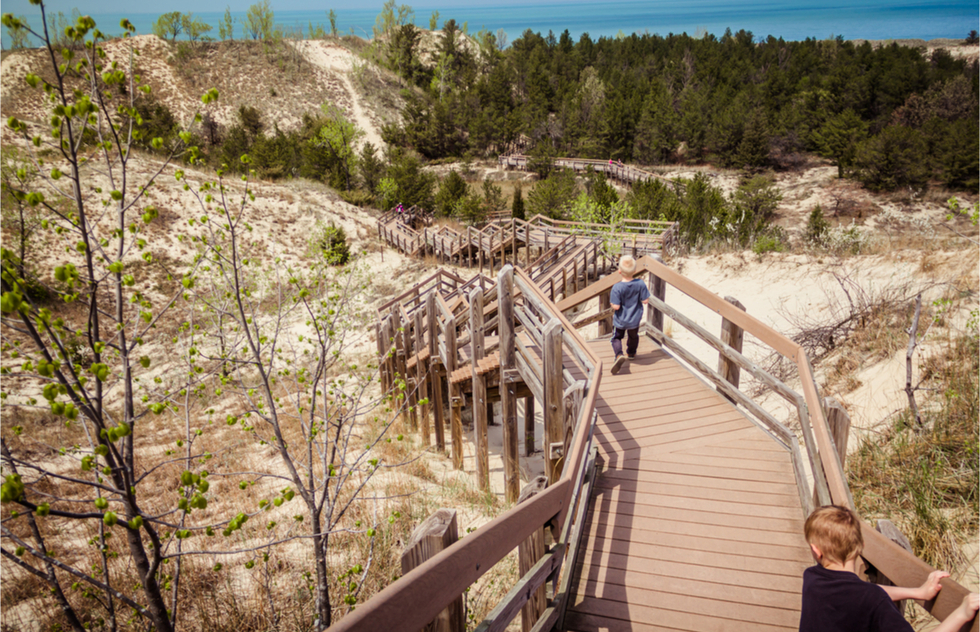 In 2019, Indiana Dunes was named the USA’s 61st national park. It’s one of the smallest in the system, but for biodiversity it ranks seventh thanks to 15 miles of beaches, the namesake sand dunes, marshes, and fields of wildflowers. One of the most impressive dunes, Mount Baldy, rises 126 feet above sea level. Some 370 bird species can be seen here along their migratory routes. 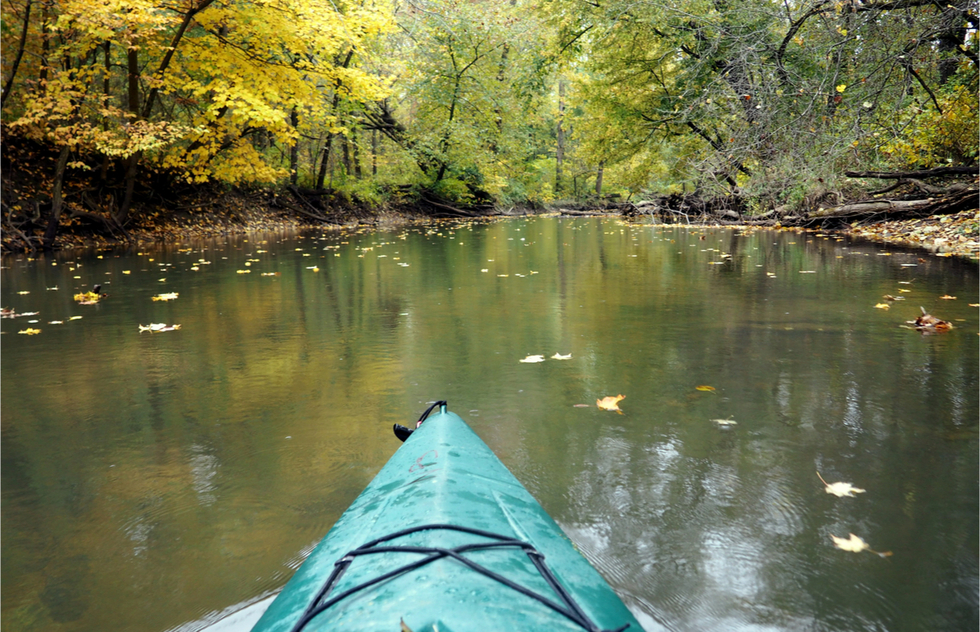 Getting here: The park is an easy, 45-minute drive from Chicago. 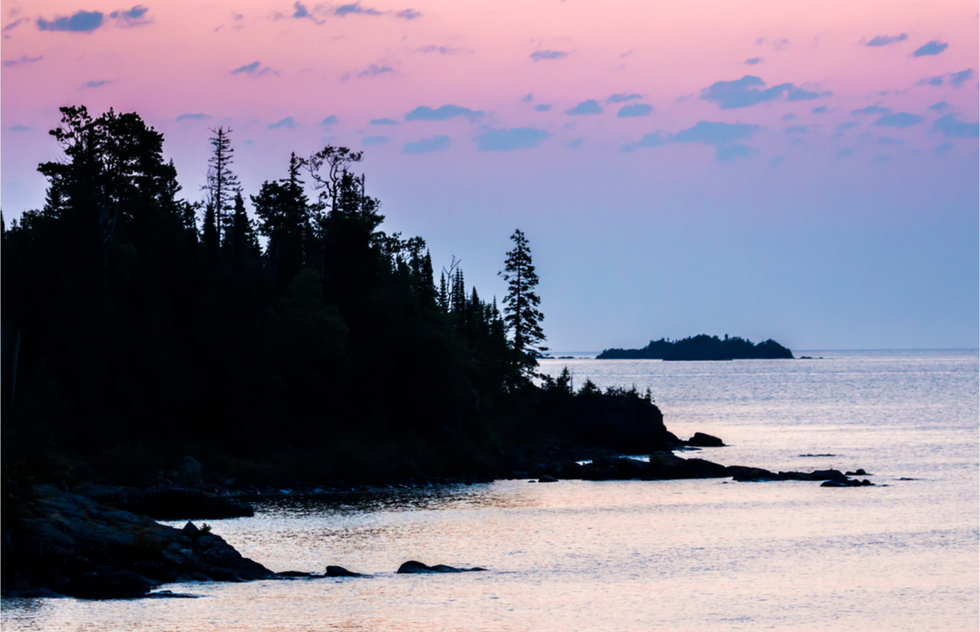 Set on the largest island in the country's largest lake, Isle Royale in Lake Superior near the Canadian border is the least-visited national park in the contiguous United States. Things don't get much wilder than this. By law, nearly all of the island's 132,018 acres are kept in a primeval state, without buildings, roads, or smartphone service. The only nods to civilization: a lodge, a lighthouse, and two visitor centers, one on either end of the island. Blessedly quiet hiking trails skirt the perimeter of the shore and snake past interior lakes and ponds.

Isle Royale’s seasonal weather can be ferocious, so the park is only open to visitors for half the year (May through October) and has no permanent residents. 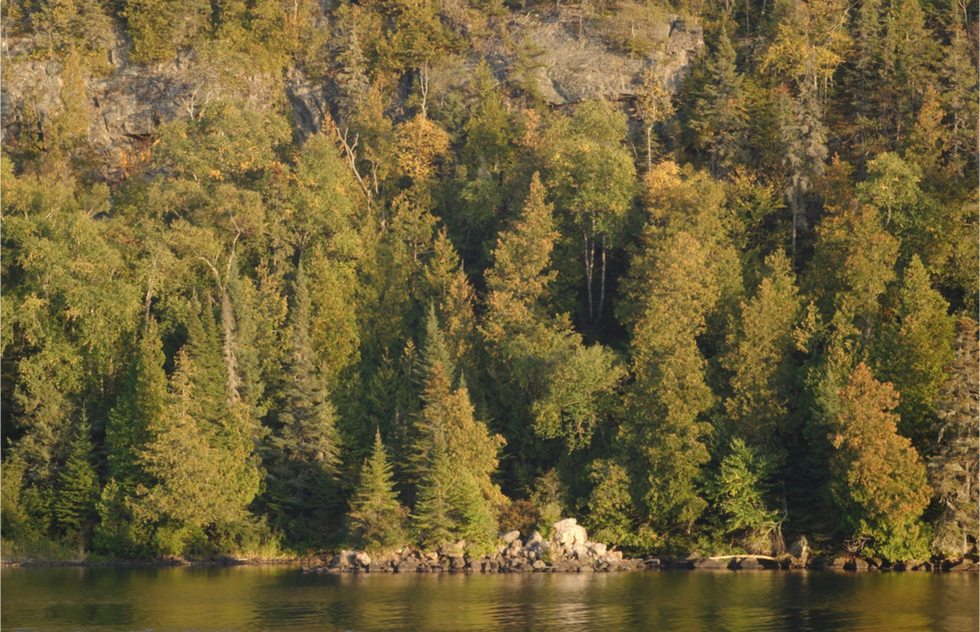 Getting here: It's a five-hour boat ride from Houghton or Copper Harbor in Michigan or from Grand Portage in Minnesota. You can also fly from Houghton. Because the island is so remote, most visitors spend about four days here—far more than the average among the other national parks. 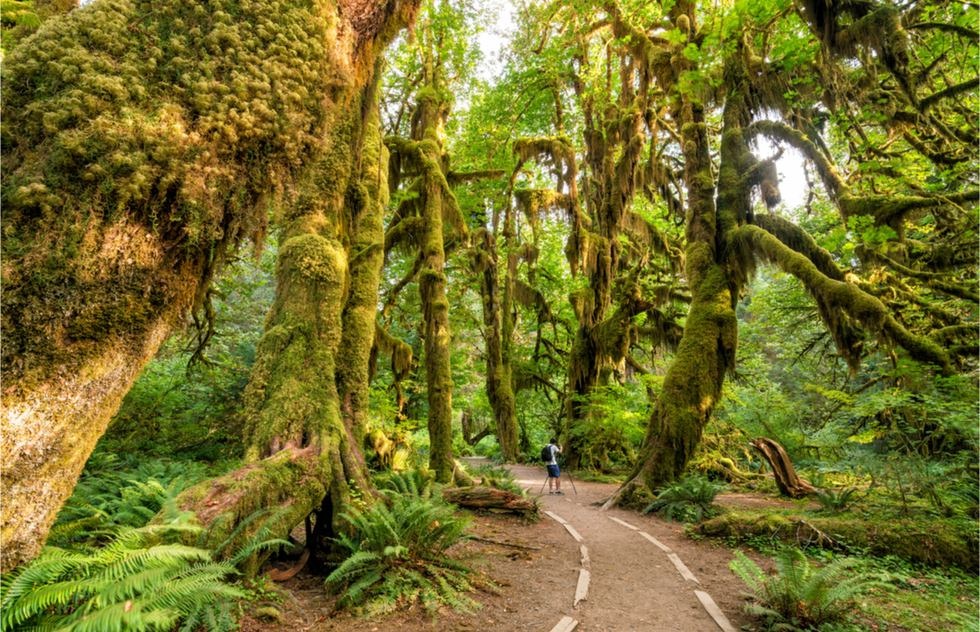 September is the best month for Olympic National Park. Temperatures are as mild then as in July and August, but the kids are back in school, so the place is less crowded. Seasonal snow and heavy downpours tend to start in October. There’s never a guarantee of blue skies since the park gets rain year-round, hence the shaggy, moss-clad rainforest pictured above. Storms usually come from the Pacific Ocean, so western portions of the park get wetter than eastern ones.

You'll need several days to do the park justice. It’s bigger than Rhode Island and 80% is not accessible by road. If you really want to see Olympic, you have to put your boots on. There's a wonderfully varied assortment of ecosystems to explore, including the longest undeveloped seashore in the United States (75 miles), misty rainforests, hot springs, and glacier-covered peaks. 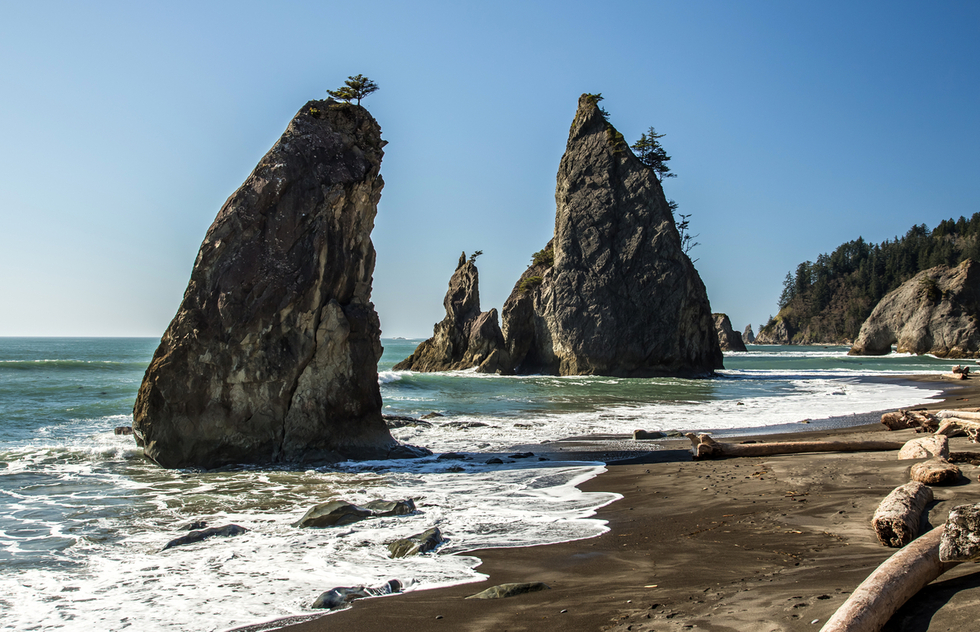 Getting here: The coastal drive from Seattle on U.S. 101 takes a little over two hours. Or you can catch one of the regular ferries. 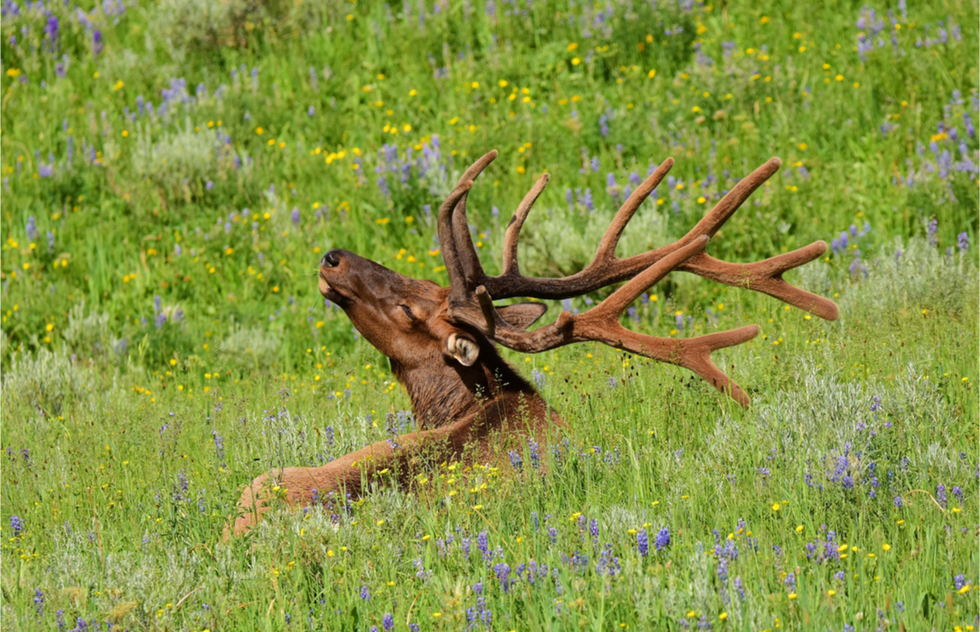 Come summer, wildflower fields burst into riotous bloom at Yellowstone. That's reason enough to visit, but there are dozens of other draws, from the park's own mini Grand Canyon to geothermal attractions such as bubbling mud pots, fumaroles, and geysers. Additionally, the park has the best wildlife-watching opportunities in the mainland United States—although in peak season, a herd of bison can quickly cause a traffic jam of gawkers. Every American should see Yellowstone in its full summer glory at least once. 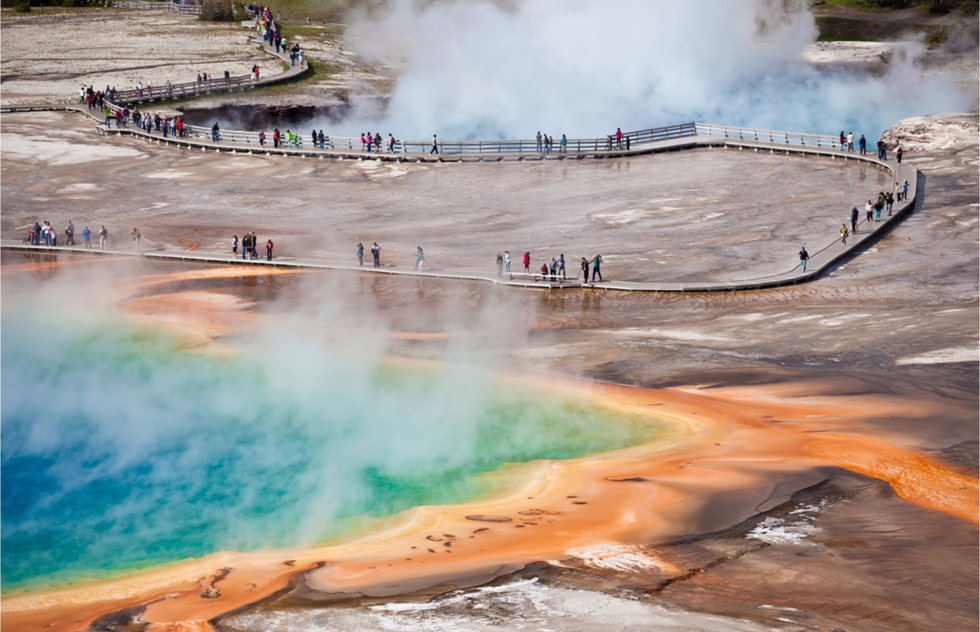 Getting here: Because public transportation within the park is not as good as it should be, most visitors choose to drive themselves from home or fly to Jackson Hole, Billings, or West Yellowstone and rent a car. 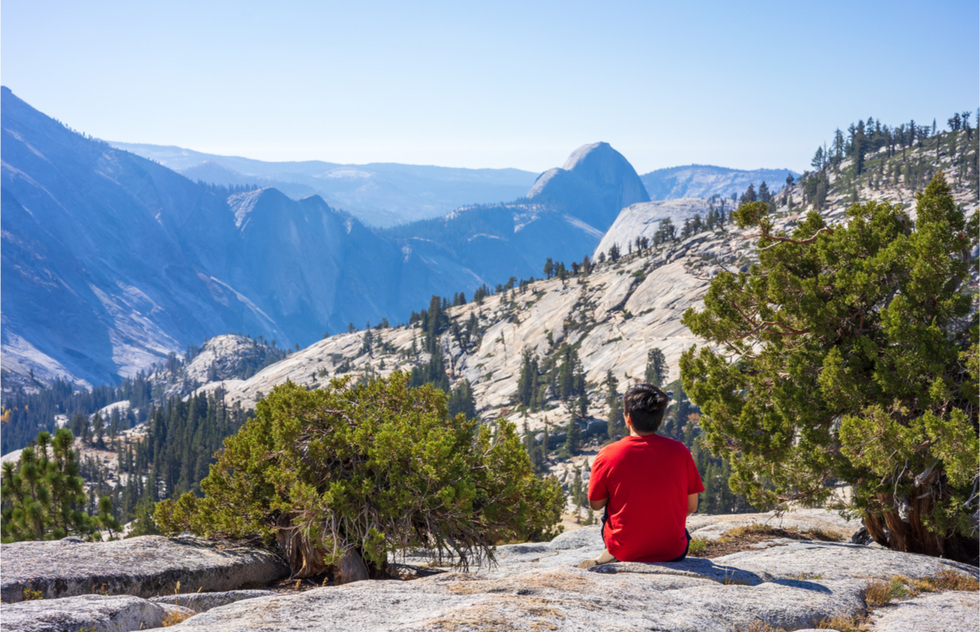 "Everybody needs beauty as well as bread, places to play in and pray in, where Nature may heal and cheer and give strength to body and soul alike,” wrote famed naturalist John Muir in his book The Yosemite. This awe-inspiring park preserves for all time the land he praised.

But it’s only in the summer months that snow melts enough to fully open the spectacular Tioga Road, California's highest mountain pass at more than 9,000 feet. The road links Yosemite to the dusty old mining towns of the Eastern Sierra, winding past sparkling mountain lakes, trailheads, the famed Tuolumne Meadows, and splendid overlooks. Olmsted Point, which rewards visitors with a view of Half Dome's less-seen northern side (pictured above) is a favorite. The spectacular drive is a big reason we recommend summer travel to Yosemite despite its popularity this time of year. 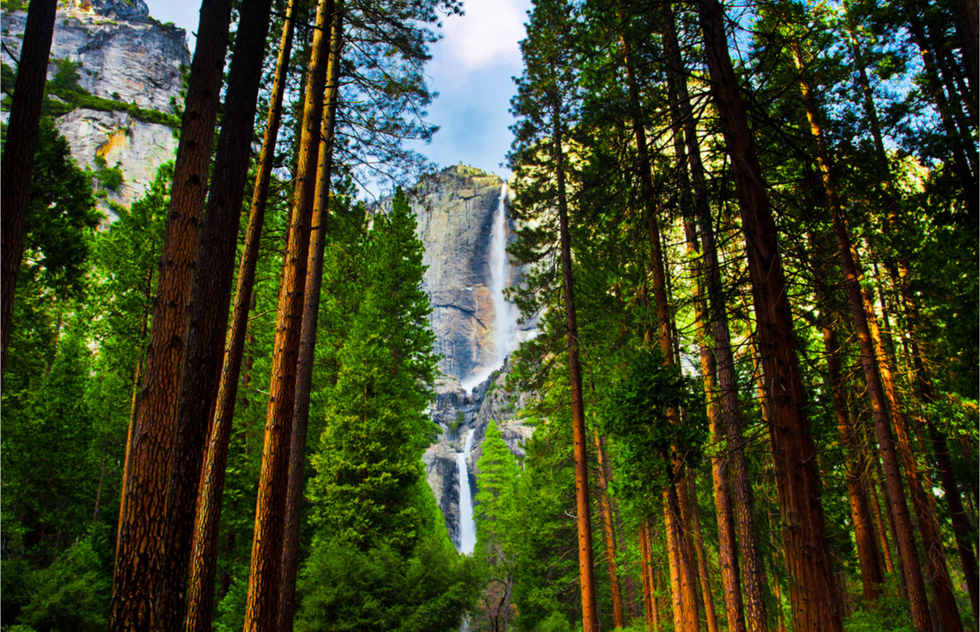 Getting here: The park is a 3.5-hour drive east of San Francisco and about a 5-hour drive north of Los Angeles.