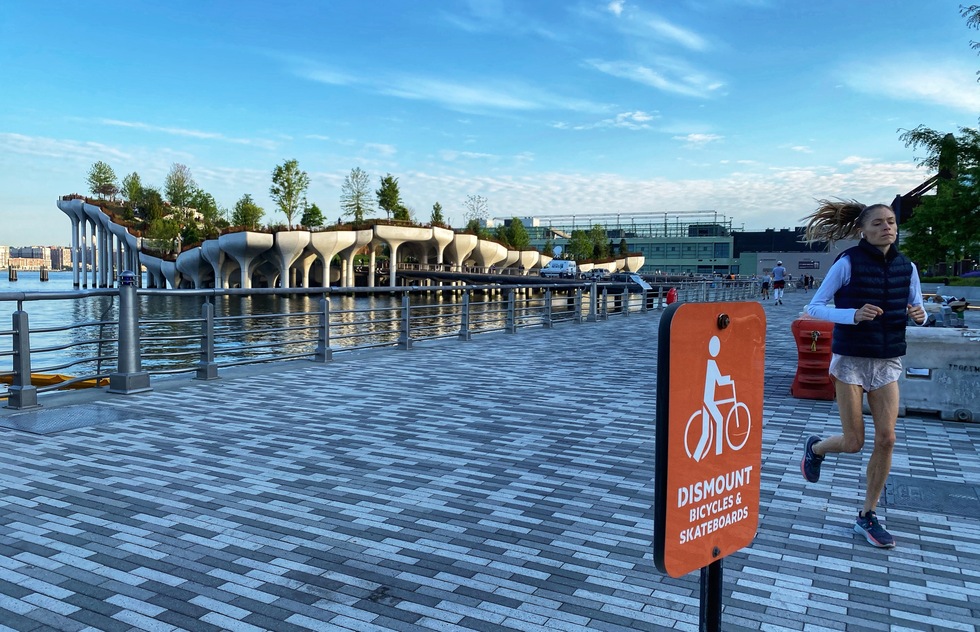 What to Know About Little Island—NYC's Pleasantly Psychedelic Floating Park

New York City may be known as a metropolis of steel, glass, and asphalt, but the city's green spaces have been as influential as the skyscrapers.

Central Park is a UNESCO World Heritage Site because it was, as the UNESCO citation puts it, a "milestone in the development of landscape architecture and urban planning. . . . The scale of the park, its artful landscape effects, its accessibility, and the great range of leisure activities that it made possible contributed to new modes and attitudes about life in big cities."

Similarly, the High Line, on the far west side of Manhattan, has become a widely admired—and copied—model of urban land reclamation, artfully converting abandoned elevated railroad tracks into an inviting and varied park hovering over the busy streets below.

Now the city has unveiled another mold-breaker of a park: Little Island. Opened on May 21, 2021, the 2.4-acre green space is already making waves for the splendid way it emerges from the Hudson River and for its whimsical design and appealing amenities.

Here's an overview of the new addition to the city's skyline—it's more than possible that imitators will soon pop up all over the world. 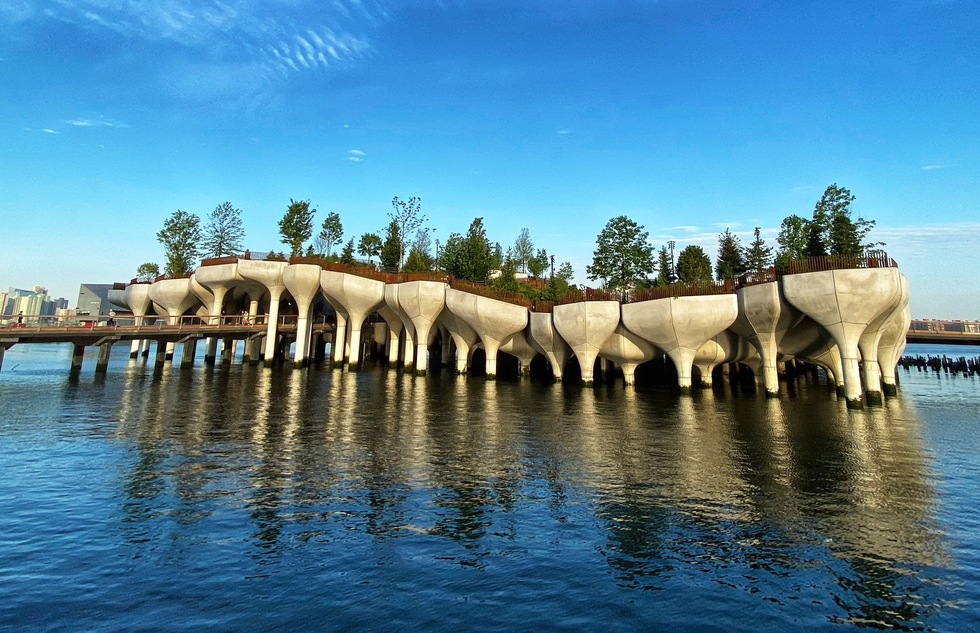 Pauline Frommer
How the Park Came to Be

Media mogul Barry Diller became the project's benefactor a decade ago when officials from the Hudson River Park Trust approached him about helping to replace Pier 54 with something residents and visitors could enjoy. Though the pier had a momentous past—survivors of the Titanic debarked here after the ship went down in 1912, and the R.M.S. Lusitania left from here on its last voyage before being torpedoed by the Germans during World War I—the location had become a crumbling eyesore.

Diller agreed to help and enlisted English designer Thomas Heatherwick (the guy responsible for Vessel at Hudson Yards) to create a vision for the waterside spot. After a series of legal challenges, plans were eventually drawn up to protect the area's wildlife and create the eye-popping park.

Diller ended up donating around $260 million toward construction costs, and his foundation has pledged to pay for concerts and events on the island for the next 20 years. It may be one of the largest private gifts given to any city ever.

Heatherwick envisioned a structure resembling a living organism emerging from the water. He worked with engineering firm Arup to create the 280 tulip-shaped concrete pillars that form the base. Each column has a slightly different size and shape with specs calculated by computer to support the weight of what's above—a hill, a theater, a walkway, what have you. The concrete structures mix with the original wood pilings of the pier, providing an extra foundational layer and preserving the underwater habitat for aquatic life. 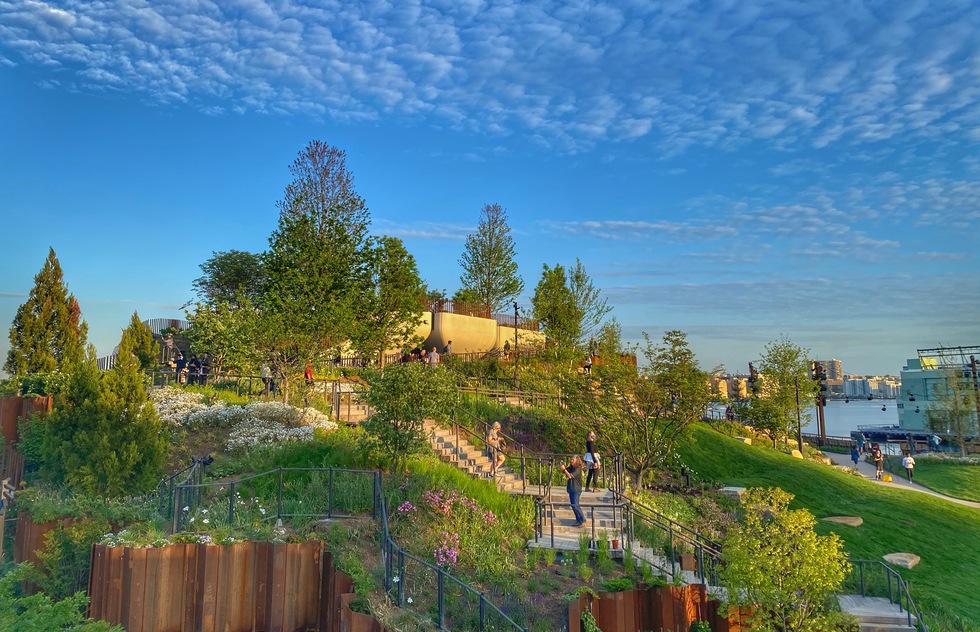 Over the centuries, Manhattan's hills have been purposefully flattened in order to give residents a more walkable city. But on Little Island, elevation changes are celebrated, supplying a striking contrast to what's on shore.

The isle is lush and green, thanks to Signe Nielsen of Mathews Nielsen Landscape Architects. Nielsen and her team have planted 350 species of shrubs, flowers, and trees. Some of the latter are expected to reach 60 feet in height when fully grown. 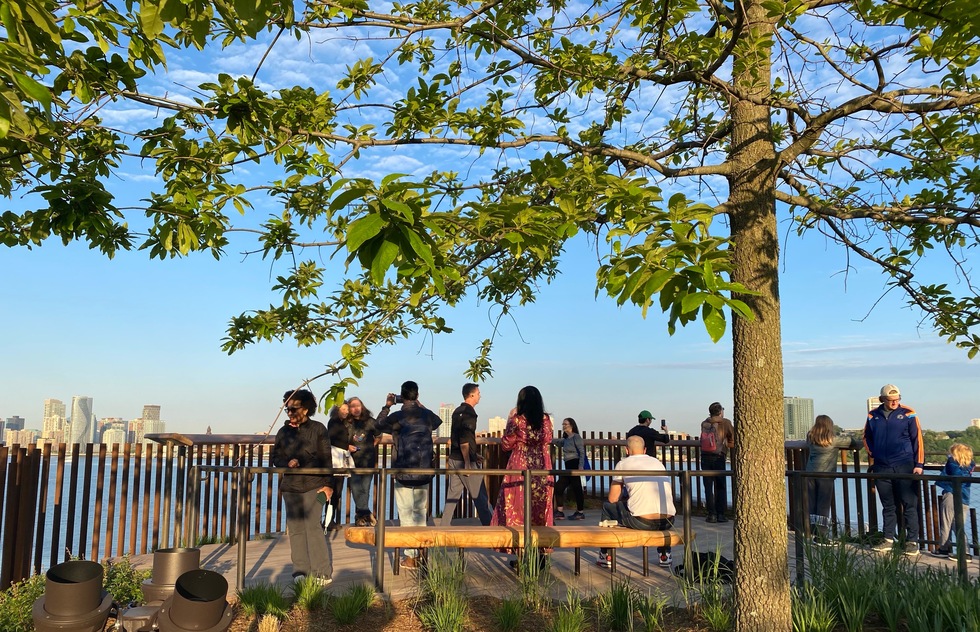 Middle-of-the-river views are a large part of the park's appeal. From the hills of Little Island, it's possible to see all the way to One World Trade Center in lower Manhattan and across the river to Hoboken, New Jersey. Traffic on the river itself can be a mesmerizing sight as well. 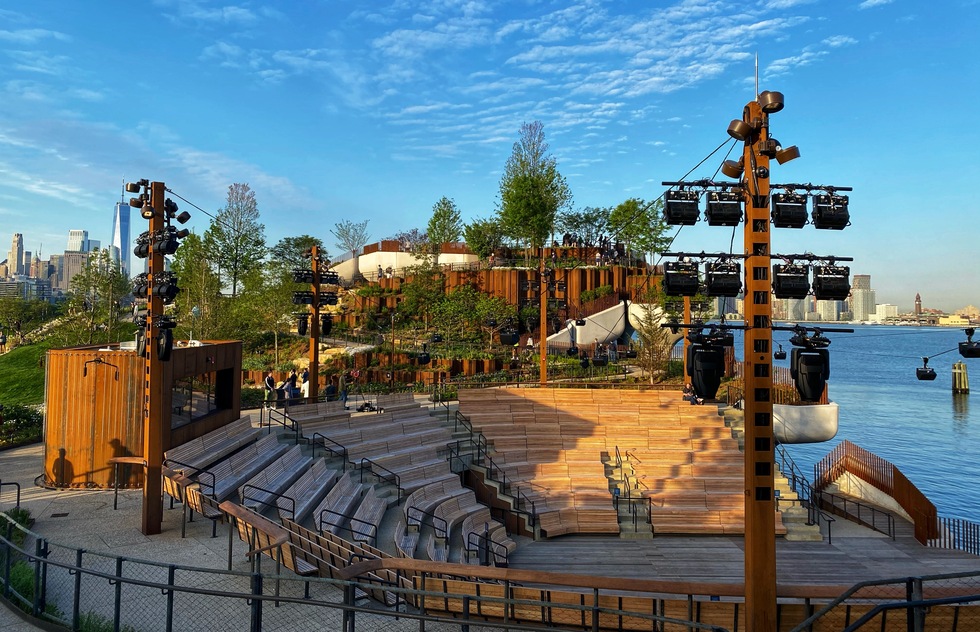 The island is home to a 687-seat amphitheater (which has been given the cringeworthy name the Amph) as well as a smaller theater with seats for around three dozen spectators. These spaces and others on the island will host a robust calendar of daily educational programming and, in the evening, dance, music, and theatrical performances. The amphitheater is situated to give event-goers lovely sunset views as the entertainment begins. 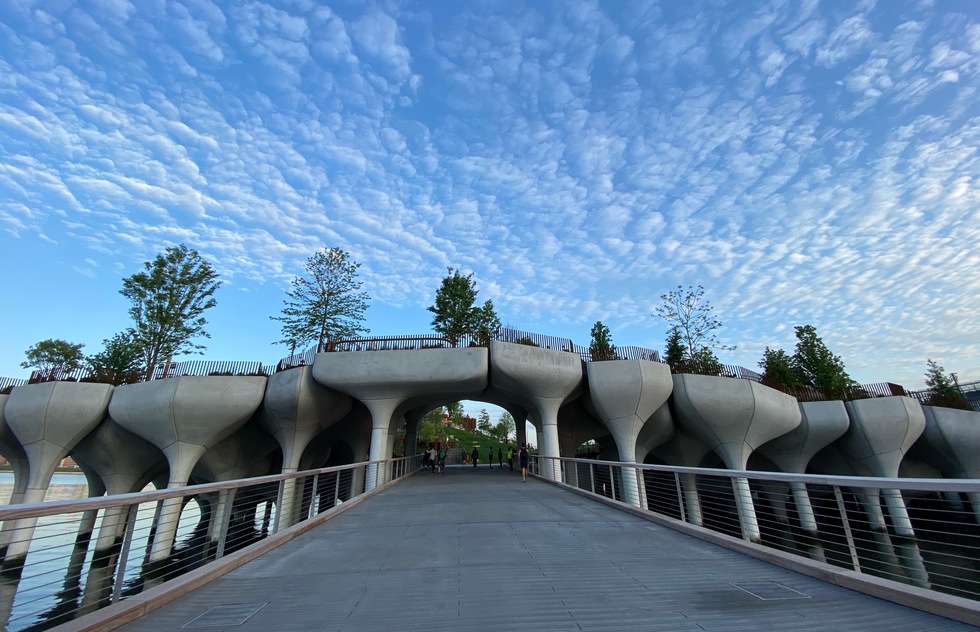 The park is open daily from 6am to 1am. Free timed tickets must be reserved in advance for entry after noon (unless you have a ticket for an event taking place on the island).

Little Island is located off the West Side Highway, with entrances at 13th and 14th Streets. The Whitney Museum of American Art is close by—we expect many visitors will want to take in both on the same day.