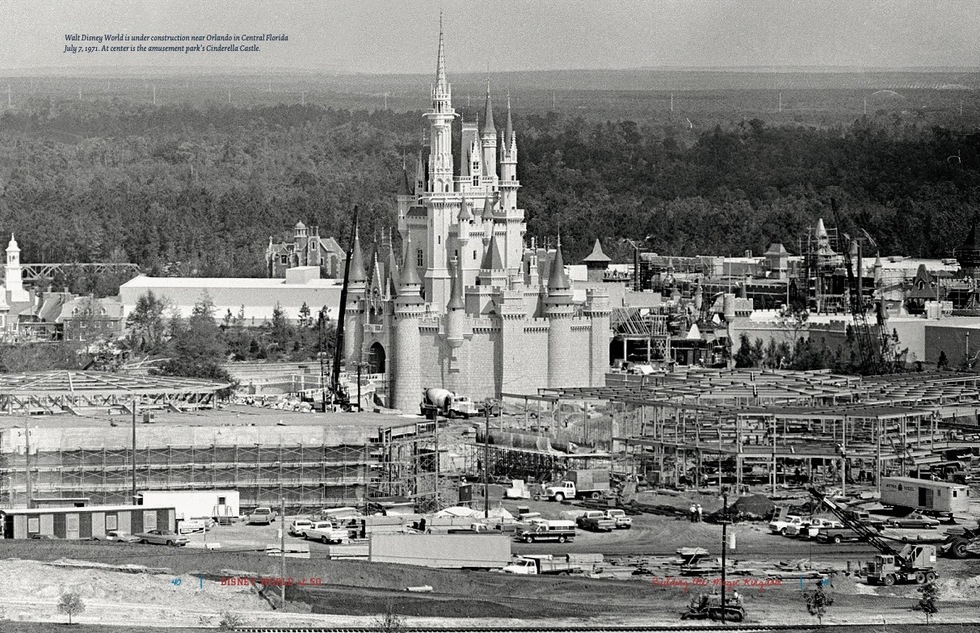 Nowadays, Florida's Walt Disney World—the most popular theme park destination on the planet—cultivates its global image through heavyweight marketing, synergistic sister brands, and a veritable army of loyal fans who praise the resort in all corners of social media.

But it wasn't always that way. In the mid-1960s, when Walt Disney was secretly buying up parcels of land for his yet-to-be-built "Florida Project," neither Walt nor a single one of his employees would go on the record to confirm the theme park kingdom was in the works. It fell to the Orlando Sentinel, the local newspaper of the modest citrus-industry farm town nearby, to piece together what was about to happen to the community.

On October 20, 1965, the paper's low-level "girl reporter" (yes, that's how journalist Emily Bavar was credited on the front page) was dispatched to grill Walt Disney himself. She correctly deduced the Mouse's imminent arrival in Central Florida.

"I sat beside [Walt Disney] at lunch and was certain I was ruining his lamb chops as I turned the conversation ... to Central Florida," wrote Bavar. "He knew the average annual rainfall, he was familiar with present and proposed highways, he knew there would be a large labor force as work on Cape Kennedy tapered off. ... The Central Florida acreage had to be Walt Disney's. That's what I told my editor when I called from the Disneyland Hotel in Anaheim."

Pictured above: Magic Kingdom's Cinderella Castle under construction on July 7, 1971, less than three months before the grand opening 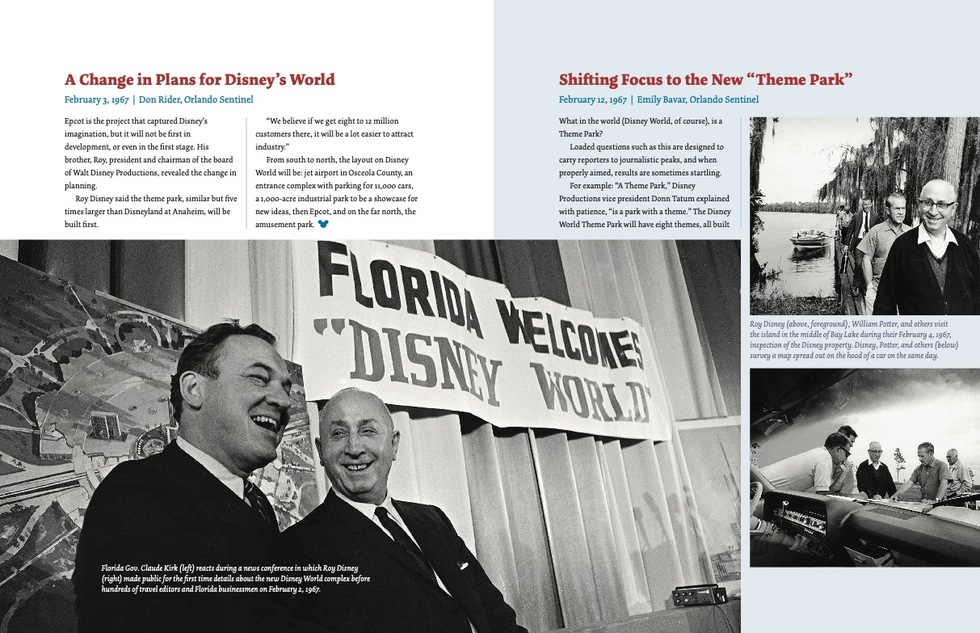 Fascinating true stories like Bavar's—plus reproductions of original newspaper clippings, excerpts from contemporaneous coverage, and rarely seen photographs from the Orlando Sentinel's deep archive of Disney-related images—are collected in Disney World at 50: The Stories of How Walt's Kingdom Became Magic in Orlando (Triumph Books), published in October 2021 in honor of the resort's 50th anniversary.

Where else could you find the deepest, richest perspective on Walt Disney World than in the pages of its own local newspaper?

Pictured above: A spread from Disney at 50 chronicling the Orlando Sentinel's 1967 coverage of the early preparations for Walt Disney World 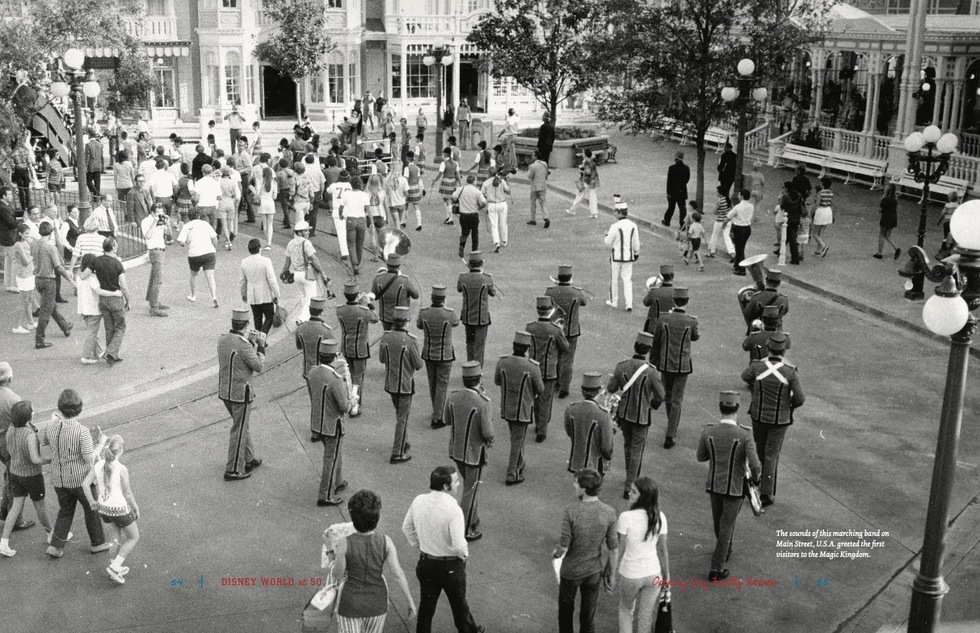 On the opening day of October 1, 1971, a marching band on Main Street., U.S.A., greeted the first visitors to the Magic Kingdom, as captured by Orlando Sentinel photographers. The shot was taken from the north balcony of the Main Street station of the Walt Disney World Railroad. 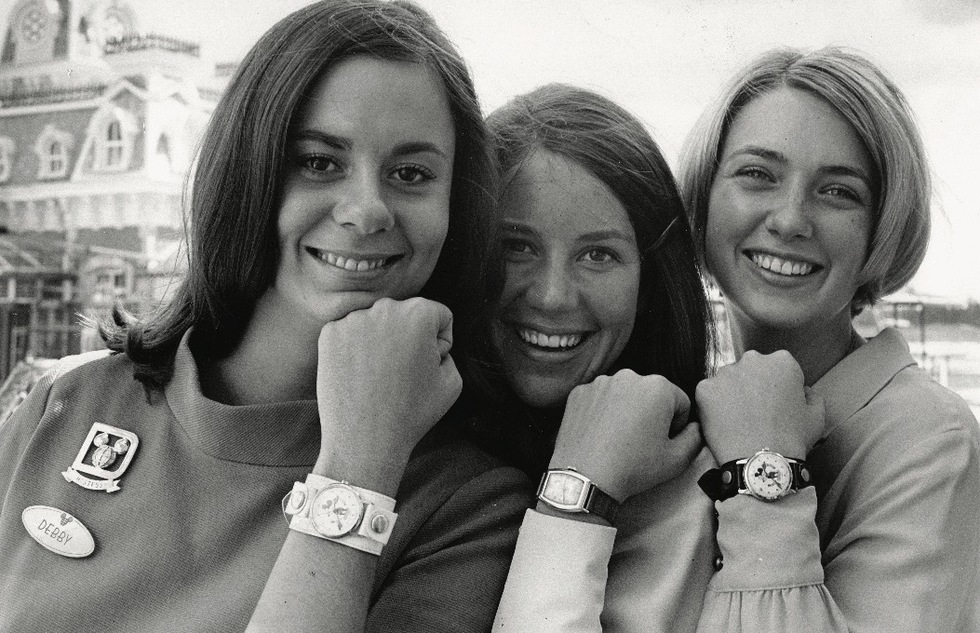 Disney at 50 excerpts Sentinel coverage of all the major milestones of the resort's development, from experiments that faded away (Discovery Island, River Country, the Pepto-Bismol-hued 25th-anniversary Castle), to plans that never happened (the Western River Expedition boat ride and a report that Space Mountain "will be 20 stories tall") to modern-day institutions in their earliest forms (Disney–MGM Studios, Lake Buena Vista Shopping Village).

But it's the grand opening coverage of 1971 that gets the most attention in the book, which digs deep to find the real people behind the events. A fly-on-the-wall report descends into the staff tunnels beneath the Magic Kingdom, and a profile of the William Windsor family from Lakeland, Florida, acquaints readers with the folks who slept in their car so they could enter the park on opening day—and won a lifetime pass for being first.

Pictured above, from Disney at 50: "The three finalists—Debby Dane, Pamela Broyles, and Joanne Sanders—for the post of Disney World's first ambassador, the official traveling spokesperson for the 'Vacation Kingdom.' Dane was selected as the ambassador of Walt Disney World on October 15, 1970." 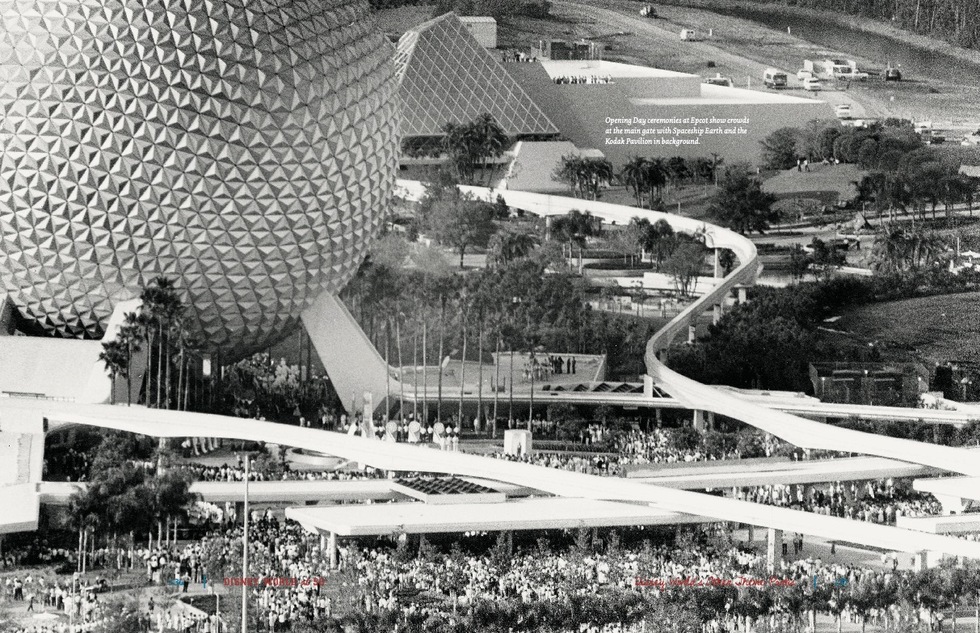 From Disney at 50: Opening Day ceremonies at Epcot show crowds at the main gate with Spaceship Earth and the Kodak Pavilion in the background.

The book reprints journalist Charlie Jean's coverage of that day, October 1, 1982: "Around noon ... a construction worker who had been employed at Epcot parachuted onto the grounds. Disney officials said they took no disciplinary action 'because he was a good worker.' But they weren't overjoyed about his entrance." 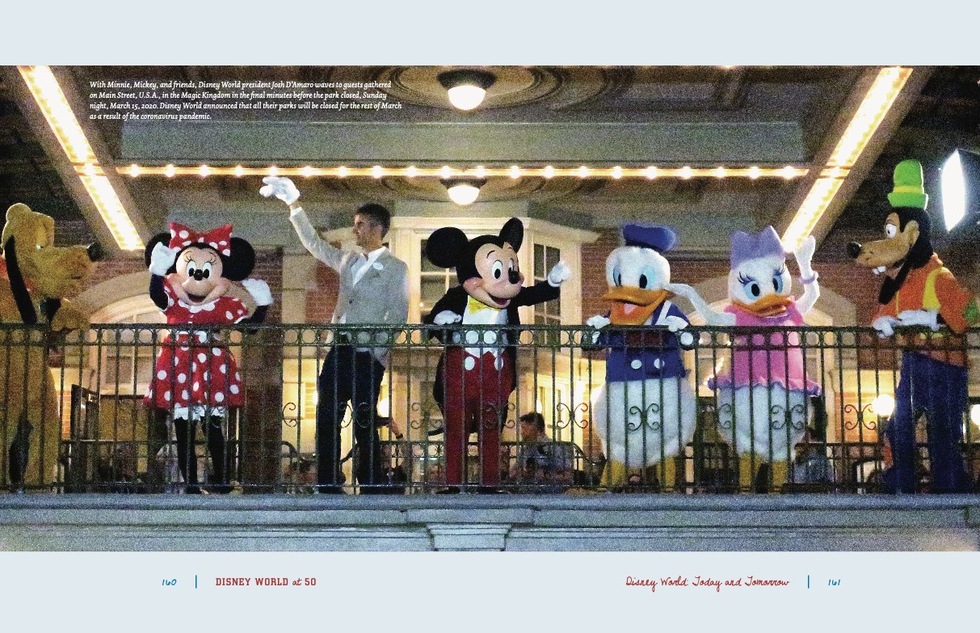 Although most of the material in the book finds nooks of the Sentinel archive where Google cannot reach, the recent era of Disney is also covered from the newspaper's perspective.

That includes this moving image from March 15, 2020, when the Magic Kingdom closed due to Covid-19.

"Late Thursday, the company announced it will shut down for nearly two weeks starting Sunday because of the coronavirus pandemic," wrote Dewayne Bevil and Gabrielle Russon in a news story included in the book.

The "cast members" above are waving goodbye to guests from the exact spot where the photo of the grand opening marching band, seen a few images above, was taken nearly half a century earlier.

Happily, the parks returned in July 2020, and Disney at 50's coverage picks up again with preparations for Remy's Ratatouille Adventure, which debuted in summer 2021 at Epcot, and the upcoming TRON Lightcycle Power Run roller coaster. 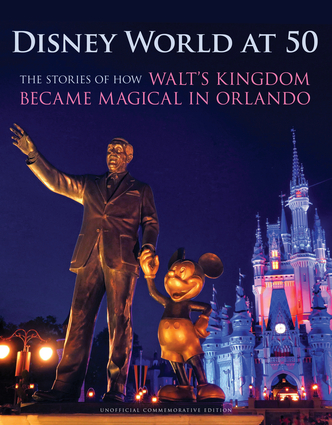