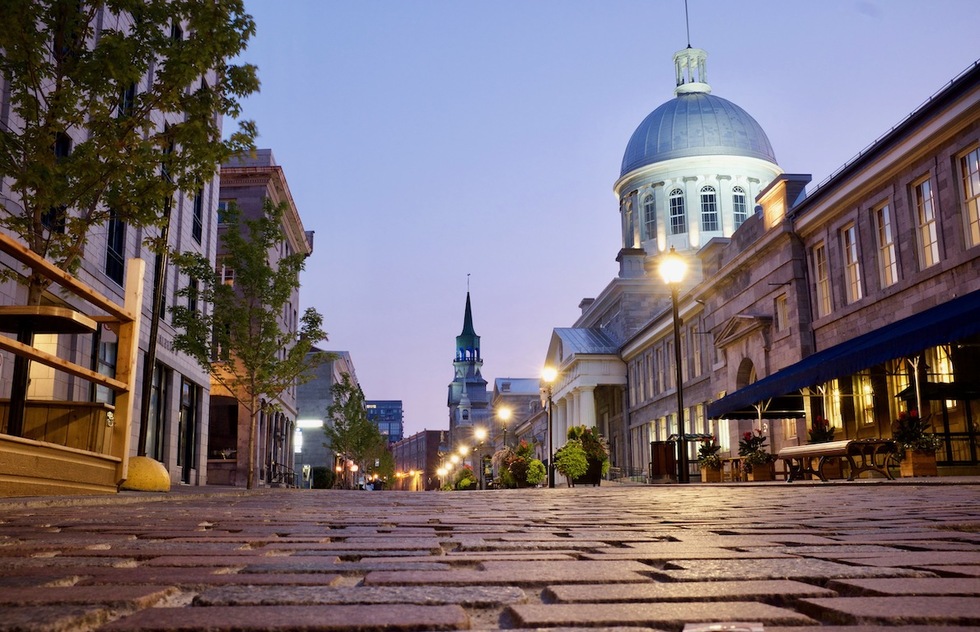 By Leslie Brokaw and Erin Trahan

An enormous joie de vivre pervades Montréal. It’s the largest city of the Québec province and the most French region of North America. Modern in every regard, Montréal has a beautifully preserved historic district dating back to its founding in 1642, skyscrapers in unexpected shapes and colors, and sprawling neighborhoods of artists’ lofts, boutiques, and cafes.

But if you only have one day, center yourself in cobblestoned Vieux-Montréal (Old Montréal) around the sites and atmosphere of the oldest and most historic part of the city. Montréal was born here in 1642, at Pointe-à-Callière by the St. Lawrence River, and this neighborhood’s architectural heritage has been substantially preserved. Restored 18th- and 19th-century structures now hold shops, boutique hotels, galleries, cafes, bars, and apartments. The area’s southern boundary is Vieux-Port (Old Port), a waterfront promenade that provides welcome breathing room for walkers, cyclists, and picnickers. Vieux-Montréal extends north to rue St-Antoine, once the “Wall Street” of Québec.

To start, take the Metro to the Place-d’Armes station. 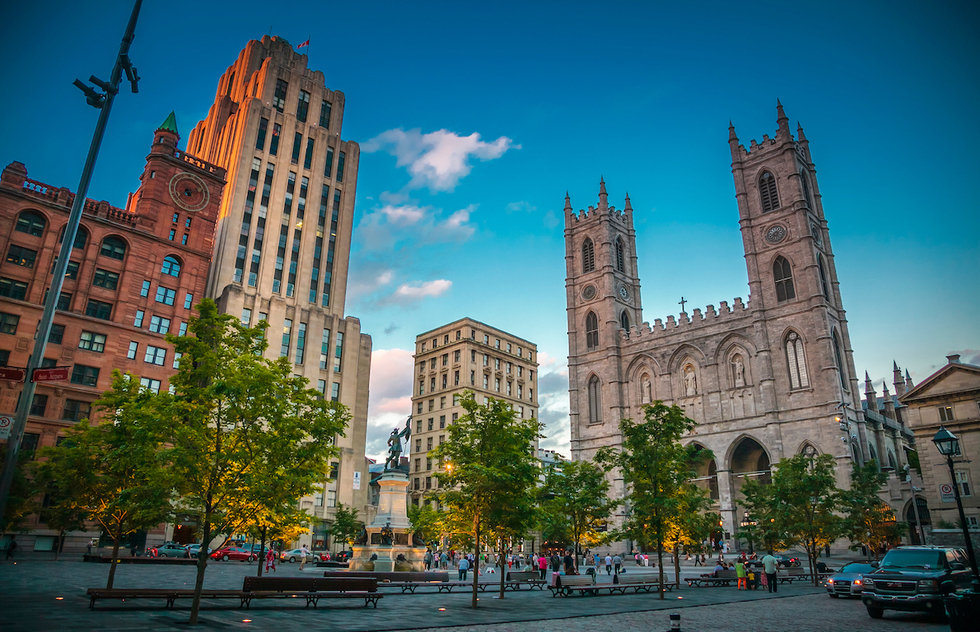 Much of the foot traffic of Vieux-Montréal passes through this small, handsome plaza at the intersection of rues Notre-Dame and St-Sulpice. Standing in the center is a monument to city founder Paul de Chomedey, Sieur de Maisonneuve (1612–76).

The plaza marks the spot where settlers defeated Iroquois warriors in bloody hand-to-hand fighting, with de Maisonneuve himself locked in combat with the Iroquois chief. De Maisonneuve won and lived here another 23 years.

The buildings that surround the plaza are representative of Montréal’s architectural growth over the years. At the far southwestern corner is a Sulpician residence of the 17th century. At the northern and southern ends are the 19th-century Banque de Montréal and Basilique Notre-Dame (your next stop). And on the east side is the Art Deco Édifice Aldred of the 20th century. The 23-story Aldred was built in 1931 and clearly resembles New York’s Empire State Building, which was completed the same year. 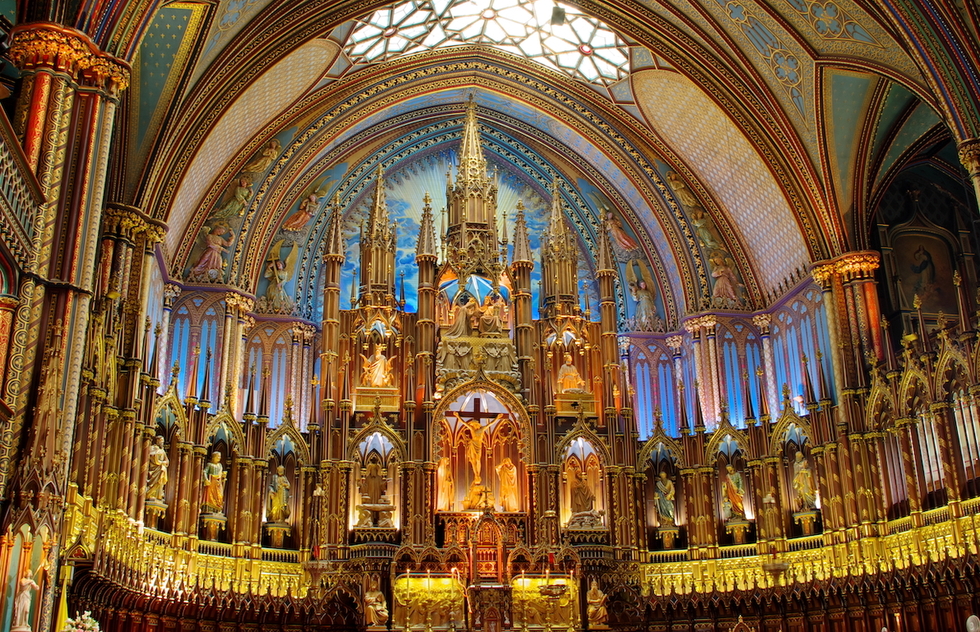 This magnificent structure (110 rue Notre-Dame ouest) was designed in 1824 by James O’Donnell, an Irish-American Protestant architect who was so profoundly moved by the experience that he converted to Catholicism. The impact is understandable. Of Montréal’s hundreds of churches, Notre-Dame has the most stunning interior, with a wealth of exquisite details, including carved rare woods that have been delicately gilded and painted, a vaulted ceiling (studded with 24-karat gold stars), a 12-ton bell, and Limoges stained-glass windows depicting moments from the city’s history.

O’Donnell bucked a trend toward neoclassicism when he designed this Gothic Revival masterpiece, whose exterior is reminiscent of Notre-Dame in Paris. Consider coming back at night for the light show, Aura, which gives the space a wildly different look. Twenty-minute guided tours of the basilica are included with the entrance fee; a more expansive 60-minute tour is also available. 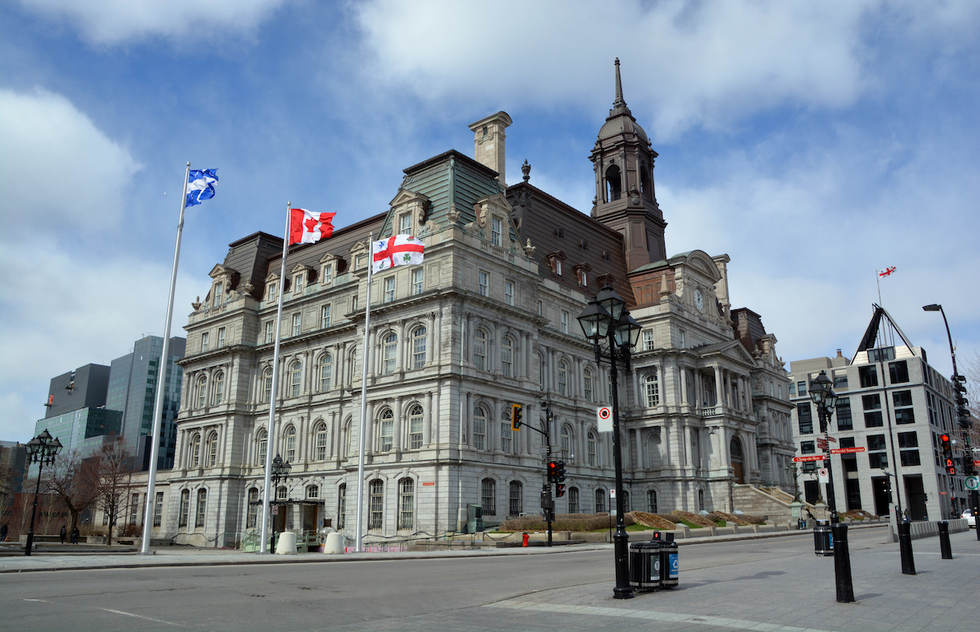 Walk east on rue Notre-Dame, one of the grand streets of the old city and home to the Montréal government. An important navigational note: Street numbers will get lower as you approach boulevard St-Laurent, which is the north-south thoroughfare that divides Montréal into its east and west halves. Numbers will start to rise again as you move onto the eastern side of rue Notre-Dame.

The next building, at 275 rue Notre-Dame est, is the turreted Hôtel de Ville (City Hall; pictured above). This ornate building has been Montréal’s official City Hall since 1878. It was here, in 1967, that French president Charles de Gaulle delighted Québec separatists by shouting from the balcony, “Vive le Québec libre!” ("Long live free Québec!")

Across the street, at 280 rue Notre-Dame est, is Château Ramezay, built in 1705 as a grand home to the city’s royal French governors. It’s now a museum. A more modern landmark will come into view, too: Looking farther east on rue Notre-Dame, you’ll see the Molson beer factory in the distance. 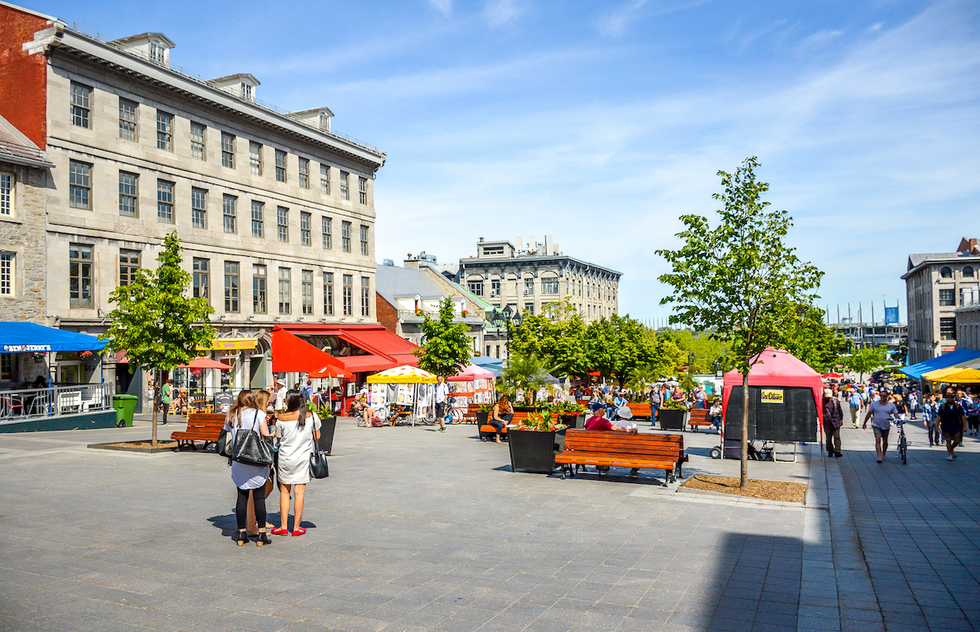 The old city’s main pedestrian plaza (between rues Notre-Dame and de la Commune) first opened in 1804 as a marketplace. Today it’s a shopping and dining magnet for visitors year-round. In summer, performers fill the air with music, and outdoor cafes serve as perfect spots for people-watching.

The 17th-century houses that line the wide promenade have steeply pitched roofs designed to shed heavy winter snows. Small windows with double casements let in light while keeping out wintry breezes. If you’re traveling with kids, you may want to head straight from here to the attractions of the Old Port, at the southern end of this plaza. 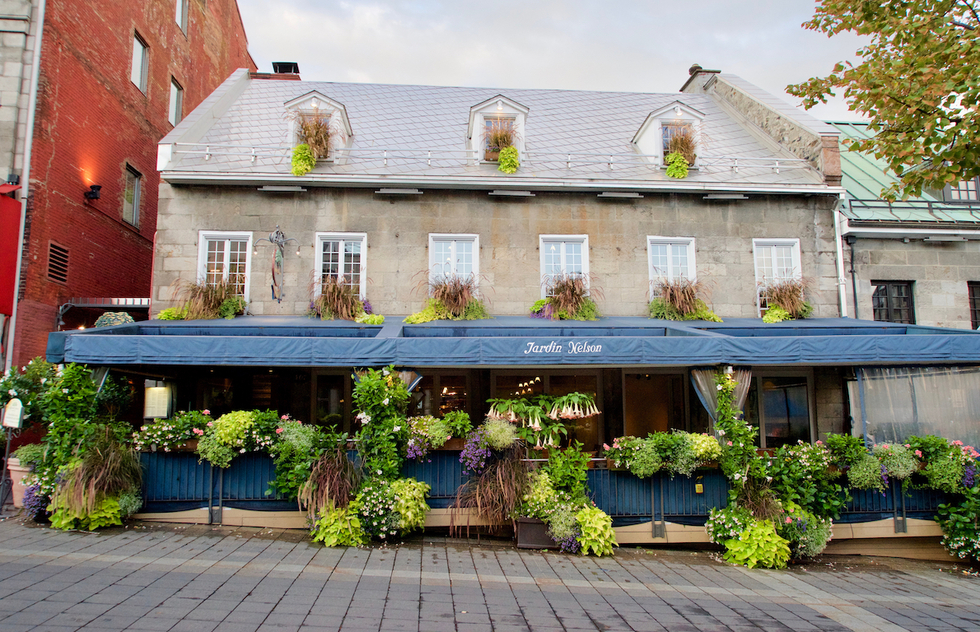 You can have lunch right in Place Jacques-Cartier at Jardin Nelson. The restaurant has a porch adjacent to the plaza, but the best spot on the premises is the appealing tree-shaded garden court. Here, live jazz is played every afternoon and evening. A gigantic 24-page menu runs from tacos and tartares to crepes and pizzas. 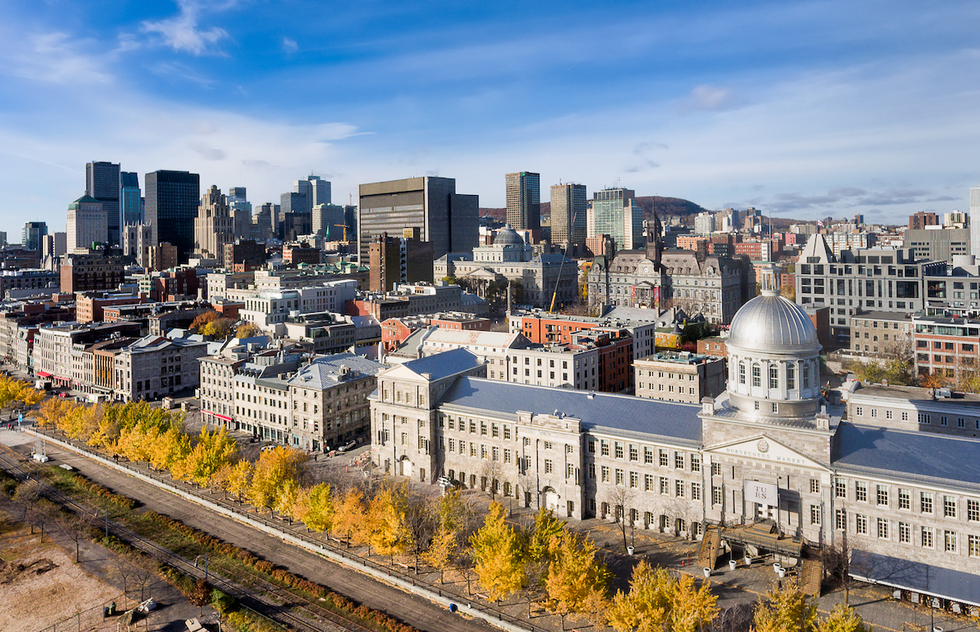 Built in 1847 and first used as the Parliament of United Canada, the Bonsecours market (350 rue St-Paul est, at the foot of rue St-Claude) is now home to restaurants, art galleries, and boutiques featuring Québécois products. The building's massive dome once served as a landmark for seafarers sailing into the harbor. Nowadays the dome lights up at night. 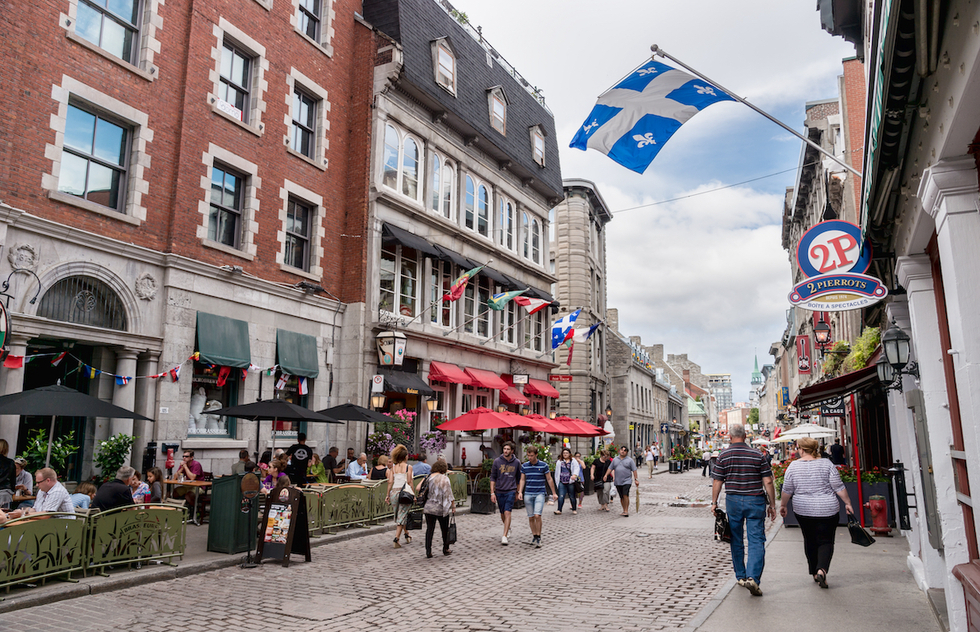 Take a stroll on this main walking street of Vieux-Montréal, lined on both sides with shops, bistros, and bars. Many decent art galleries have sprung up alongside the loud souvenir shops, and some recommended restaurants are here, too. If you’re done walking, head south a few blocks to the sights of the Old Port.

Looking to treat yourself? If you didn't have lunch earlier, you can swing by the Hôtel Bonaparte (447 rue St-François-Xavier) for the two-course-plus-coffee lunch at the hotel's elegant restaurant, where adroit service pairs with high-style French cuisine. 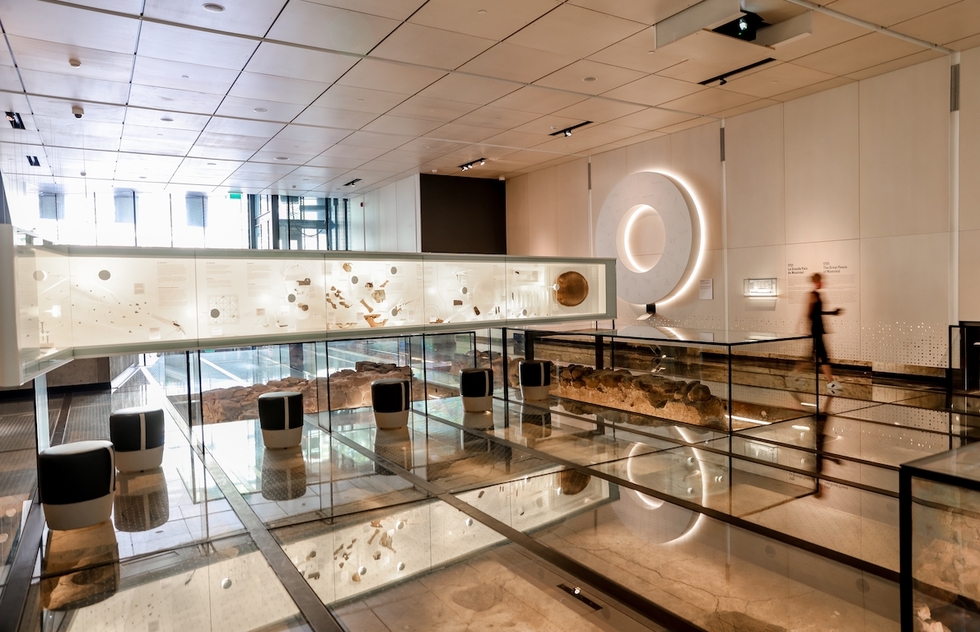 A first visit to Montréal should include a stop at this continually modernized museum complex (350 Place Royale) devoted to archaeology and history. Evidence of the area’s many inhabitants—from Québec’s earliest native peoples to French trappers to Scottish merchants—has been unearthed during archaeological digs here, the site of Montréal’s original colony. Visitors tour the exposed ruins of the earlier city by winding through a subterranean complex.

If you work up an appetite traversing the centuries, take a three-minute walk to the extremely popular and earthy bakery/café Olive et Gourmando (351 rue St-Paul ouest). It offers up croissants, scones, and hearty fare such as Cuban sandwiches and the Cha-Cha-Chia bowl with berry chia pudding, quinoa, and nut butter muesli. 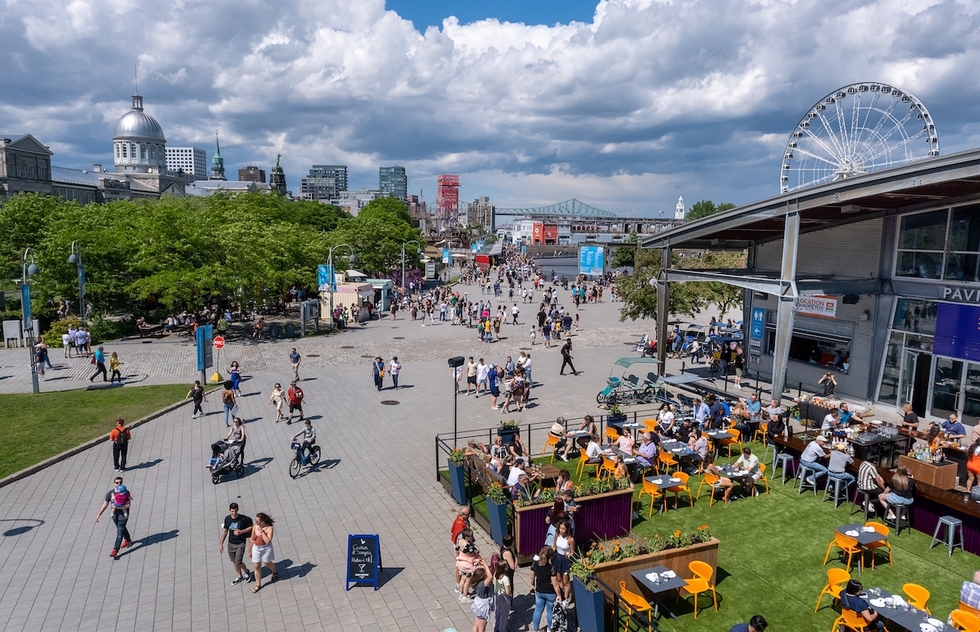 Montréal’s Old Port has been central to the city's commercial and economic status over the last 200 years. Now the converted waterfront and its piers (or quays, as French speakers call them) are a playground year-round.

The gigantic Grande Roue de Montréal Ferris wheel was installed here in 2017; it operates year-round. From June to September, a miniature electric train scoots around the area (passengers may board near the Ferris wheel). You can also take a ride on the zip line, sign up for a cruise along the St. Lawrence, or explore hands-on exhibits at the Centre des Sciences de Montréal. In cold months, a spacious ice skating rink becomes the focal point.

For more help planning a trip to the area, pick up or download a copy of Frommer's Montréal Day by Day.