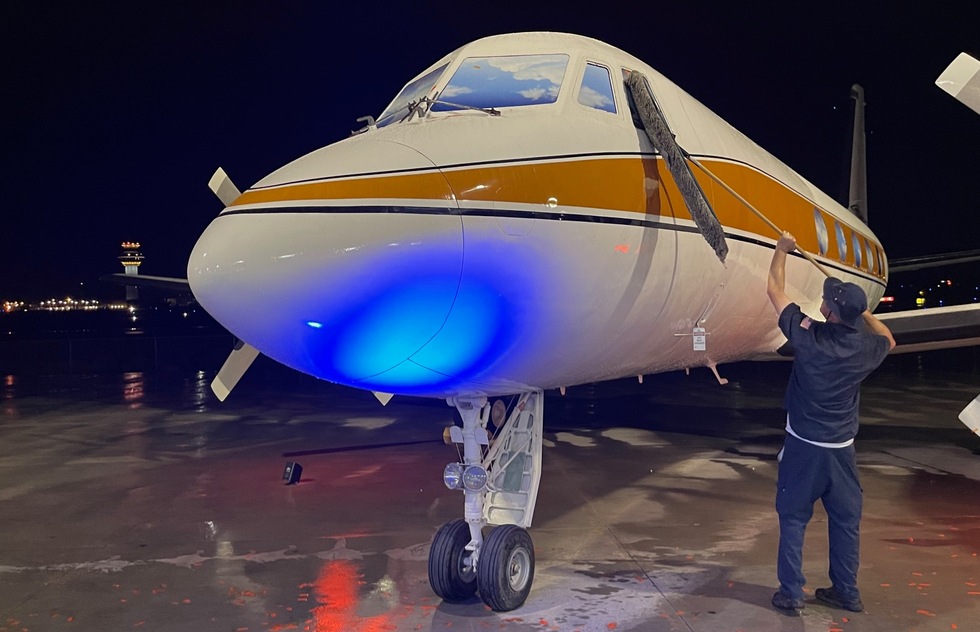 This unlikely homecoming was more than a half century in the making.

The private corporate plane purchased by Walt Disney in 1963, has gone on public display at the Palm Springs Air Museum in California.

The plane, which was used to plan Disney's Orlando resort, the World's Fair of 1964–65, and three decades of other company projects, previously sat neglected for 30 years in various spots on the Walt Disney World property. It's now on indefinite loan to the museum by the Walt Disney Company.

This is the first time the general public has been able to approach the plane in person and inspect it up close.


Pictured above: A museum worker brushes confetti off the aircraft after its unveiling ceremony. 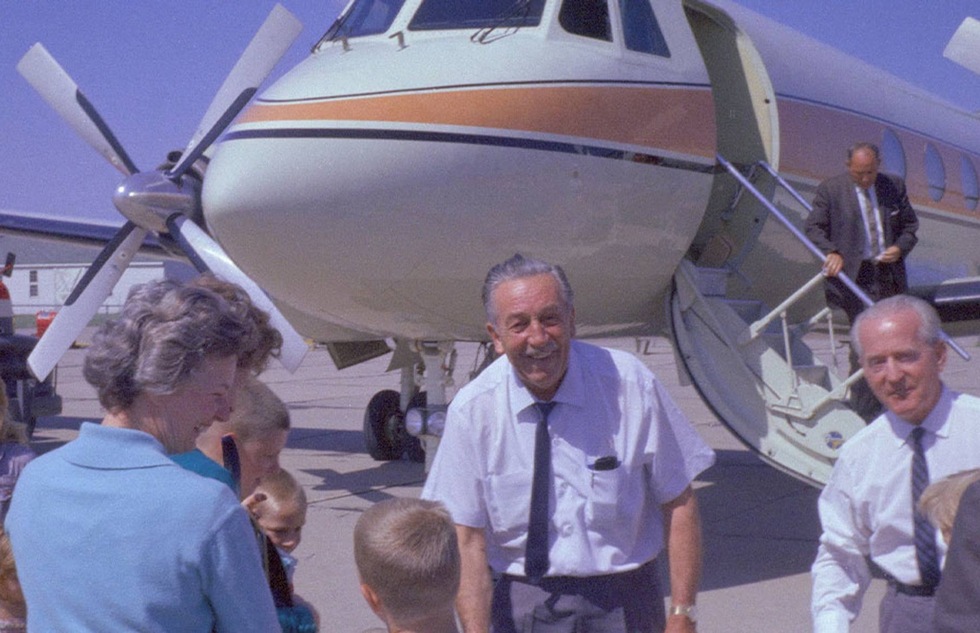 In late 1963, Walt Disney arranged for the purchase of the customized private corporate plane, a Grumman Gulfstream G-159.

At the time, he was searching for an ideal location to build his second Disneyland resort, and he had his eye on some neglected swampland in the middle of Central Florida. It was through its porthole windows if his new plane, registration N234MM, that Disney surveyed the place that would be posthumously named in his honor: Walt Disney World.

Over the aircraft's lifetime of use, it logged some 20,000 hours and transported passengers that included Julie Andrews, Annette Funicello, and U.S. presidents Jimmy Carter and Ronald Reagan.

It also flew to San Juan, Puerto Rico, on a mission to find authentic design elements for the company's then-upcoming Pirates of the Caribbean ride.

After Disney died in 1966, the plane, nicknamed Mickey Mouse One, continued serving Disney executives, and twice it had supporting onscreen roles in two Disney studio-made Kurt Russell movies, The Computer Wore Tennis Shoes (1969) and its sequel, Now You See Him, Now You Don't (1972). 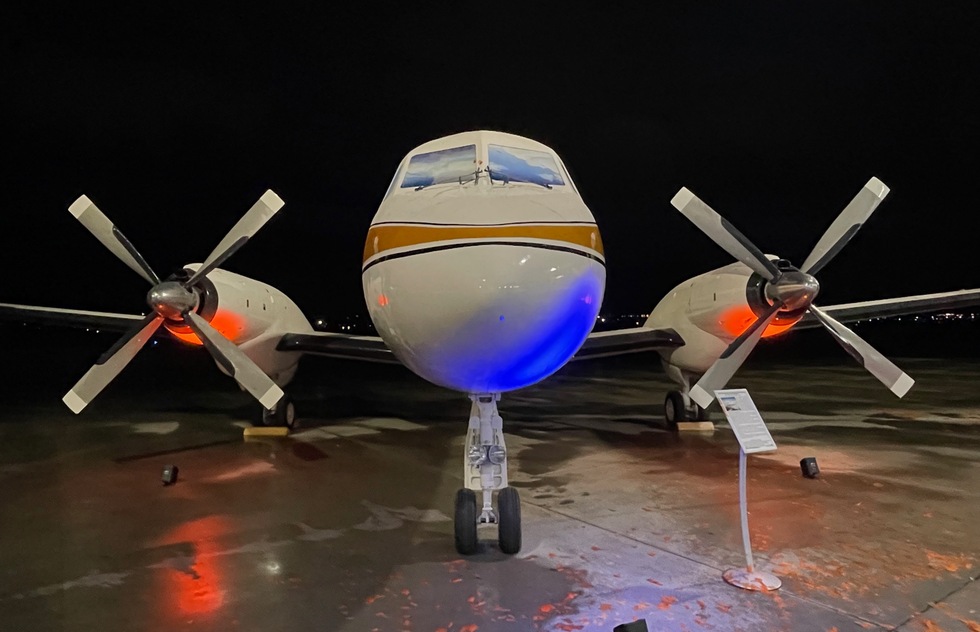 Mickey Mouse One flew its last in October 1992, when it landed on World Drive, a highway beside what was then the Disney–MGM Studios theme park. It was to become a theme park prop.

Back then, the Disney company wasn't quite as adept at monetizing its scraps for brand nostalgia as it is today, so after N234MM's retirement, it was unceremoniously deposited among a variety of disused "picture car" movie vehicles at the theme park, now called Disney's Hollywood Studios.

Thousands of tourists passed the abandoned Gulfstream on tram tours, but it was essentially left to rot in the Florida sun for a generation.

When Hollywood Studios' backlot attraction closed in 2014 to make way for Toy Story Land and Star Wars: Galaxy's Edge, the plane was hauled to a non-public location on Disney property a few miles away, by a waste treatment plant north of Disney's Animal Kingdom park.

Now the plane's original orange-and-black livery has been restored, and in September 2022, the aircraft was shipped by land to Anaheim, the location of the original Disneyland, to temporarily serve as a featured exhibit at D23 Expo, a biennial convention for Disney fans.

There, as the plane stood off-limits behind ropes, current Disney executives announced its final home would be the Palm Springs Air Museum, in the California desert about 100 miles east of Los Angeles. 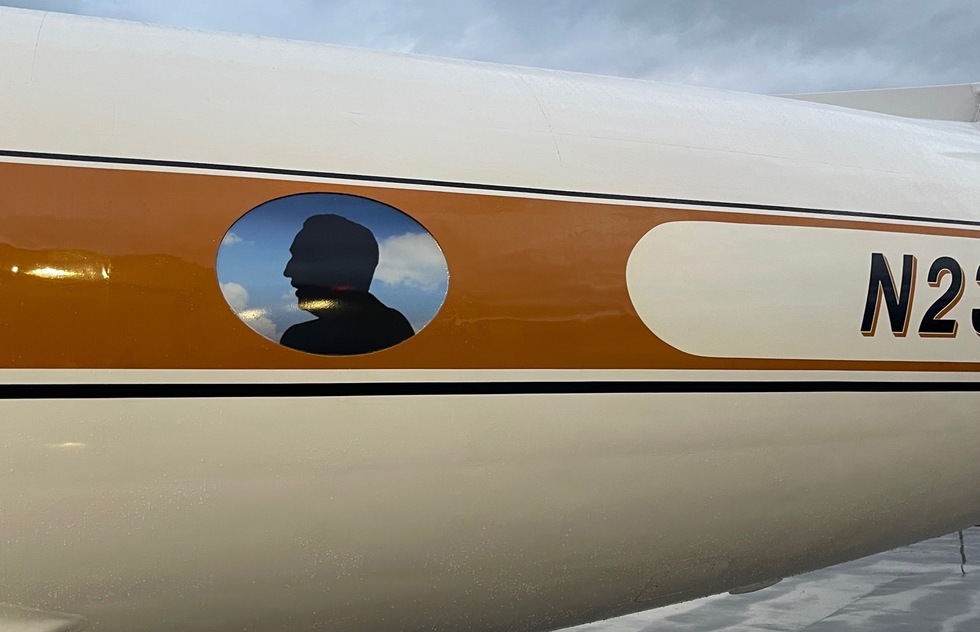 Jason Cochran
"A lot of Floridians were not happy that we were bringing it back," said Ed Ovalle of the Walt Disney Archives at the unveiling event.

He was joking, but the choice of Palm Springs wasn't plucked out of the blue sky—Walt Disney and his family owned two homes in the city. The first one was sold to fund the construction of Disneyland and the second was purchased in 1957 once the park proved to be a runaway financial success.

The plane also made frequent flights to Palm Springs carrying Walt Disney and his family. A log book from Disney's pilot, Chuck Malone, shows that Mickey Mouse One's first flight to Palm Springs—using the same airport the Air Museum is now a part of—occurred on December 7, 1963, just two days after the Disney company received final delivery of the aircraft in California.

Pictured above: A silhouette of Walt Disney has been added in the window where his designated seat was located. 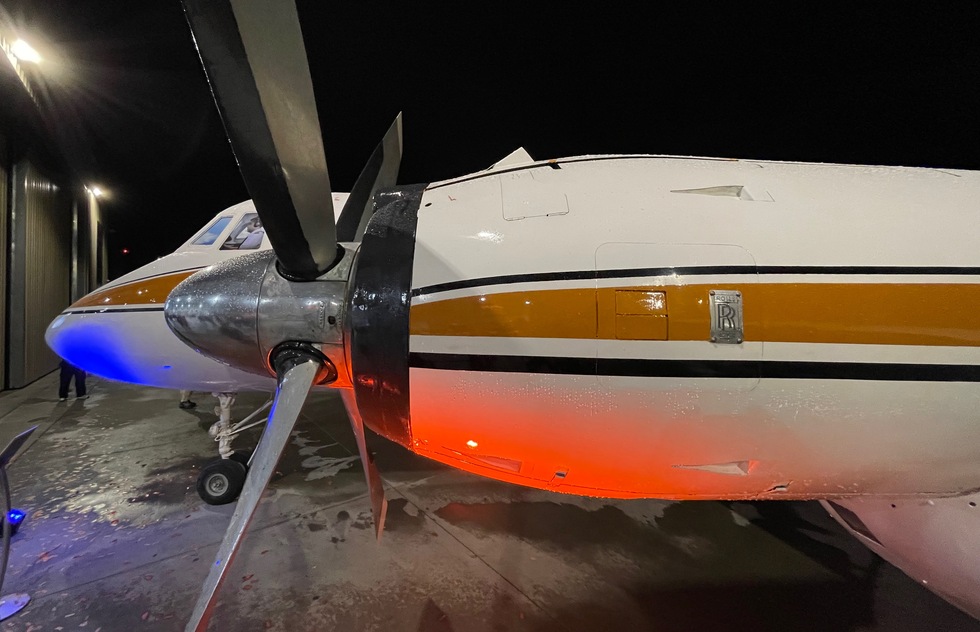 Walt Disney is also a founding father of the airport that now hosts the plane.

He, along with midcentury notables including film producer Mervyn LeRoy and rubber scion Leonard Firestone, publicly advocated for the bond sale that enabled the purchase of what is now the Palm Springs airport from the U.S. government, which built it in the late 1930s for military purposes.

Pictured above: The twin propeller plane ran on Rolls-Royce engines. 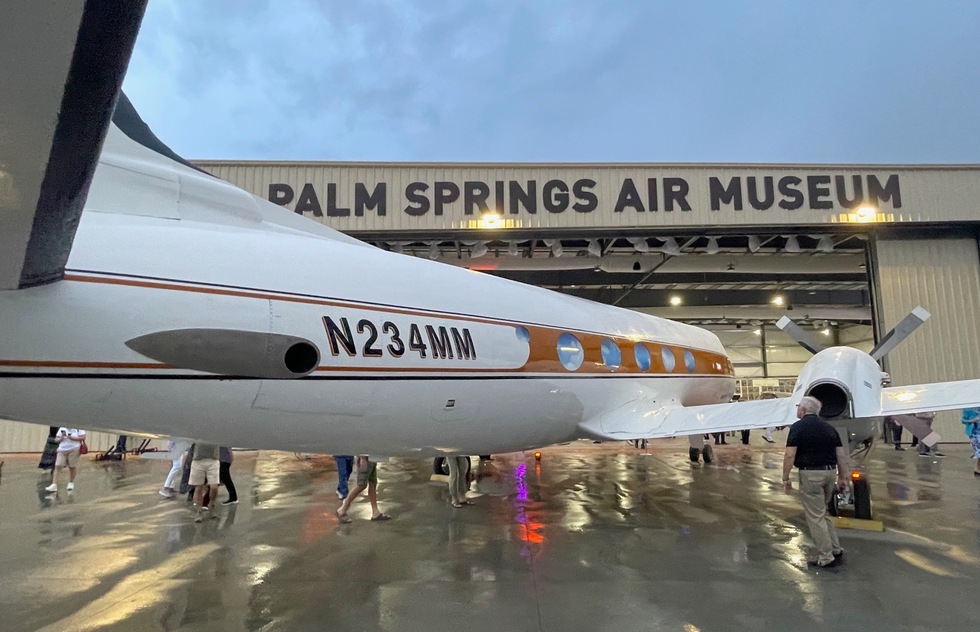 Although the plane's museum unveiling happened outdoors during a lull in a rare desert rainstorm, for regular visitors, the aircraft is displayed inside a hangar.

The cabin is not accessible to the public, but the Walt Disney Company, which owns the loaned plane, has located the original interior design schematics. Ovalle, a researcher at the Walt Disney Archives, said he hopes that copies of those designs will be made available for purchase in the future.

An accompanying exhibit of artifacts from Mickey Mouse One is scheduled to open at the museum for an indefinite run on December 5, 2022, the 121st anniversary of Walt Disney's birth.

The Palm Springs Air Museum (760-778-6262; 745 North Gene Autry Trail; www.palmspringsairmuseum.org) costs $22 for adults and $20 for seniors, veterans, retired military, and teens aged 13–17, and is free for active military and kids 12 and under. It's open daily 10am–5pm. Walt's plane is presented part of the general collection, which includes a variety of military aircraft spanning the 20th century.

Related gallery: Travels with Walt Disney: Go Where He Vacationed