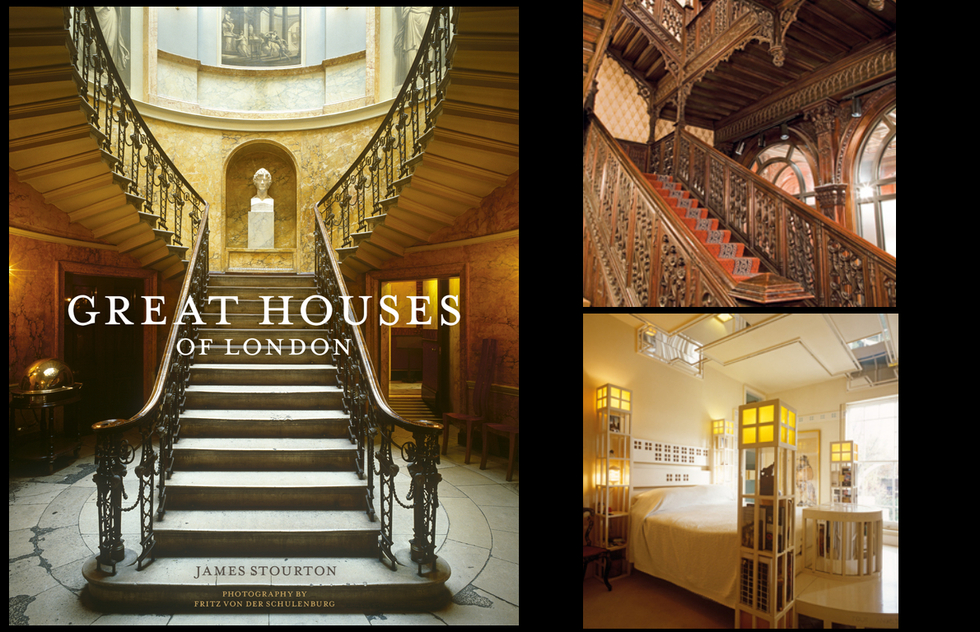 PHOTOS: Go Inside the Grandest Homes in London

Royal palaces aside, the historic homes of London are usually overshadowed by their stately country cousins (your Blenheims, your Chatsworths, your Downton Abbey–inspiring Highcleres), writes James Stourton in Great Houses of London, a lavish photo book published by Frances Lincoln (originally released in 2012; newly revised in 2022).

The public's relative lack of familiarity with London’s residential splendor is not due to a dearth of worthy options, according to Stourton (though the Blitz of World War II “knocked about many houses,” as he puts it with British understatement). A publisher’s description explains, however, that many of London’s most spectacular interiors hide behind sober facades, giving passersby little clue to the marvels within.

But thanks to sumptuous images captured by award-winning photographer Fritz von der Schulenburg along with Stourton’s vivid storytelling, readers of Great Houses of London get to be lookie-loos inside 41 of the city’s most dazzling dwellings, from elaborate baroque properties to futuristic visions in glass and steel.

The book opens the doors to historic addresses such as 10 Downing Street, where the U.K.’s prime minister lives, as well as buildings now used as embassies, private clubs, charities, and, in many cases, private homes. Given that many of the interiors are closed to tourists, the book supplies an enriching supplement to an in-person visit to London, granting rare access to some of the city’s most exclusive spaces.

Scroll on to see a selection of images from the book. 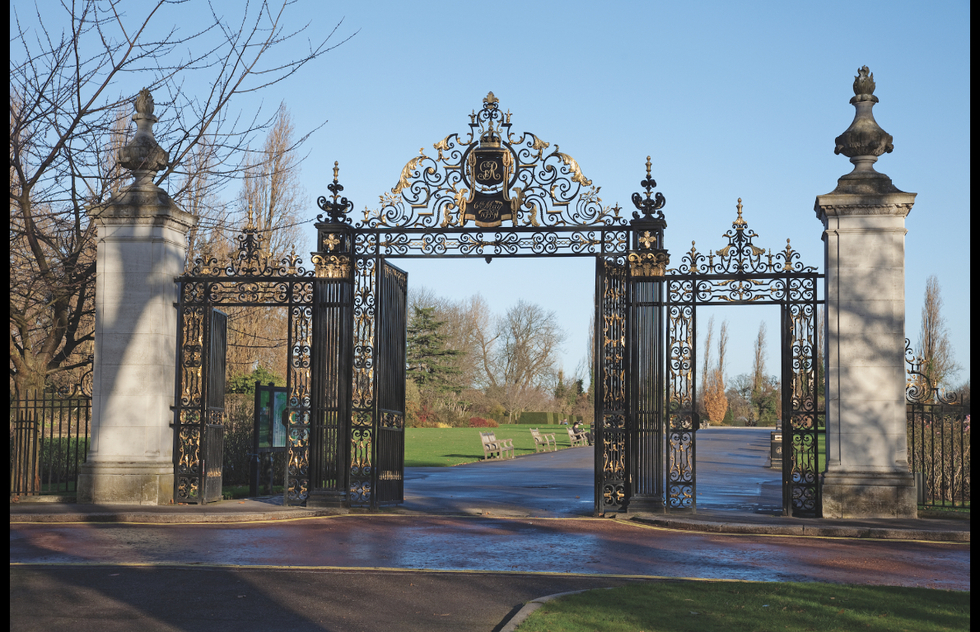 An early 19th-century plan to install more than 50 villas inside the Regent's Park for the pals of King George IV (who was Prince Regent when the roughly 400-acre hunting ground was transformed into a pleasure garden) went unfulfilled. Only a handful of the homes were ever built, and some of those have since been demolished.

A couple of the villas that remain are secondary homes for Middle Eastern royalty; another, Winfield House, is the residence of the American ambassador, whose lawn constitutes the largest private garden in London if you don't count Buckingham Palace.

Great Houses of London shows off rarely seen interior sights such as the "vaguely Byzantine embellishments" inside St. John's Lodge—though readers are likely to agree that the best parts of what Stourton calls the "Arcadian classical dream land" of the park, with its sport courts, zoo, open-air performance venue, cafes, and peaceful sylvan groves, are the places open to the public.

Pictured above: Jubilee Gates at the entrance to Queen Mary's Gardens in the Regent's Park 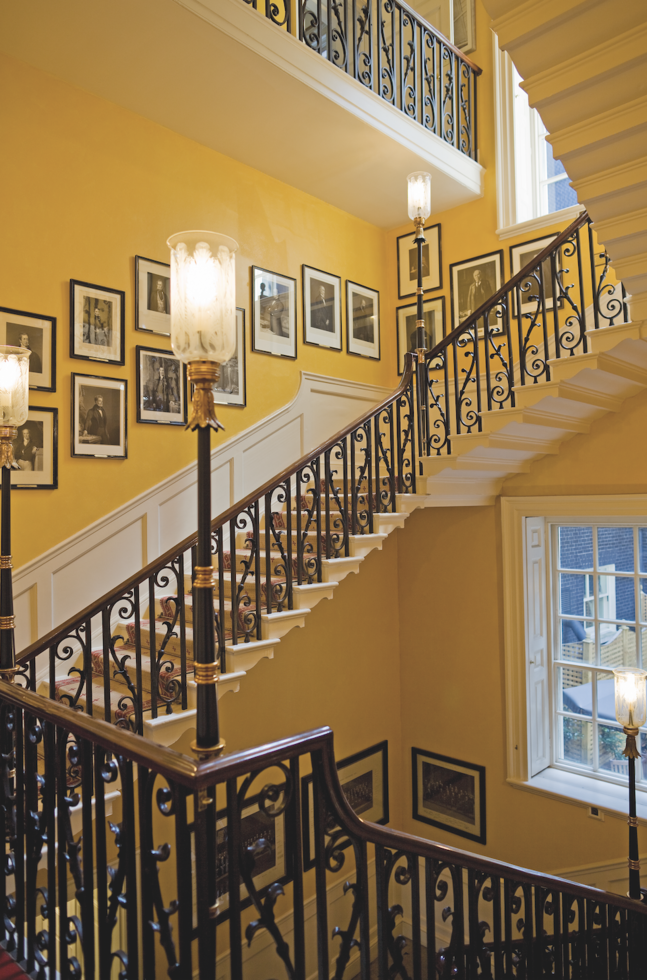 Dubbed "my vast awkward house" by William Pitt, who served as Prime Minister during the reign of George III, No. 10 Downing Street blossoms from the "false modesty of the entrance," according to Stourton, into an eccentric and somewhat rambling agglomeration of two buildings that together form the most "cobbled together and rebuilt" house in London. The book walks readers through the first-floor state rooms, made over in the 1980s to include ornamental ceilings and other flourishes at the behest of Margaret Thatcher, who found these spaces "too plain and masculine." We also get glimpses of the palatial state dining room and the courtyard's gigantic Corinthian columns.

Pictured above: photos of past prime ministers ascending a staircase 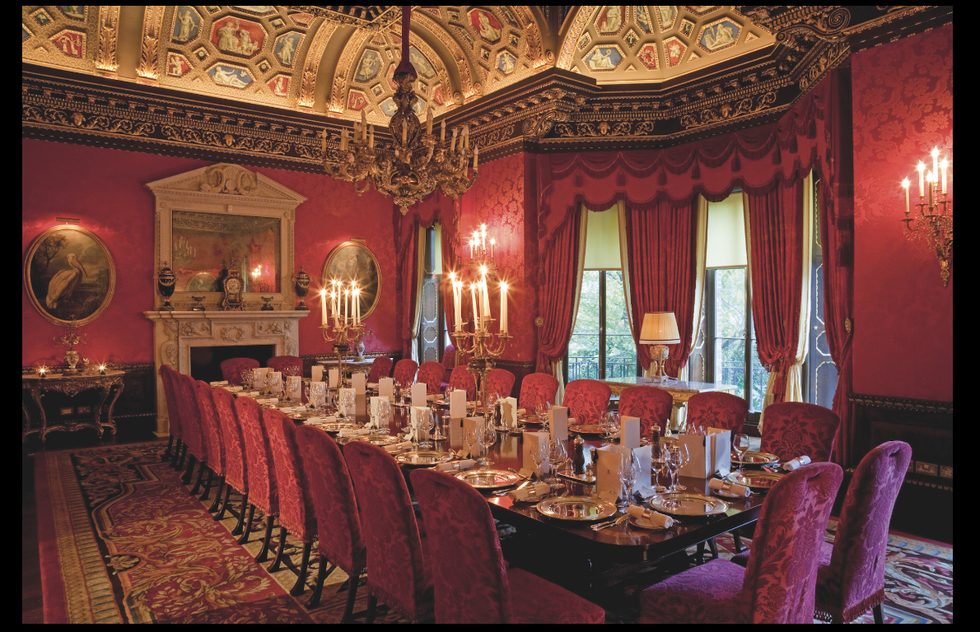 Also known as the William Kent House after its mid-18th century architect, the townhouse at 22 Arlington Street in the St. James's district is now used as a special events space by the adjoining Ritz hotel—making this, in the author's estimation, the "grandest hotel extension in the world." The central feature of the house is the exceedingly rich great room (pictured above), which features crimson damask and ornate ceilings that remind Stourton of other more-is-more spots such as the Doge's Palace in Venice and the Villa Madama in Rome. 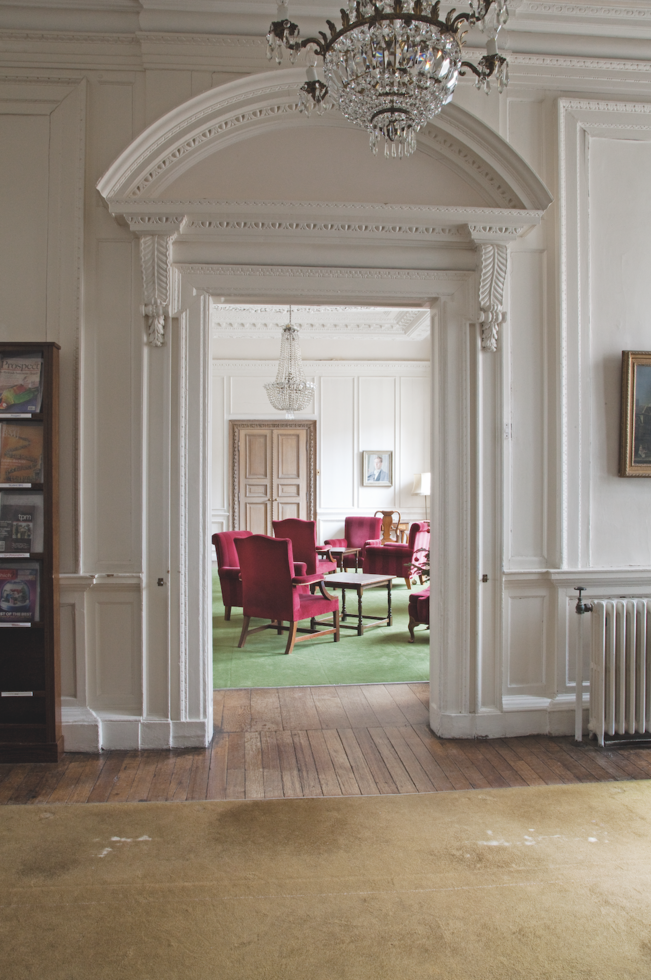 Established in the mid-1600s as a residence for a friend of Charles II, Ashburnham House has been part of Westminster School near Westminster Abbey since the 1880s. We're guessing the impressive staircase, complete with sparkly chandelier dangling from an oval gallery, outdoes whatever graced the entrance to your own high school.

Ditto for the school library and reading room (pictured above), set amid the first floor's Restoration ceilings and 18th-century paneling. "Modest and dignified," as Stourton writes, Ashburnham House quietly endures, "the survivor of fire, schoolchildren, and aerial bombardment." 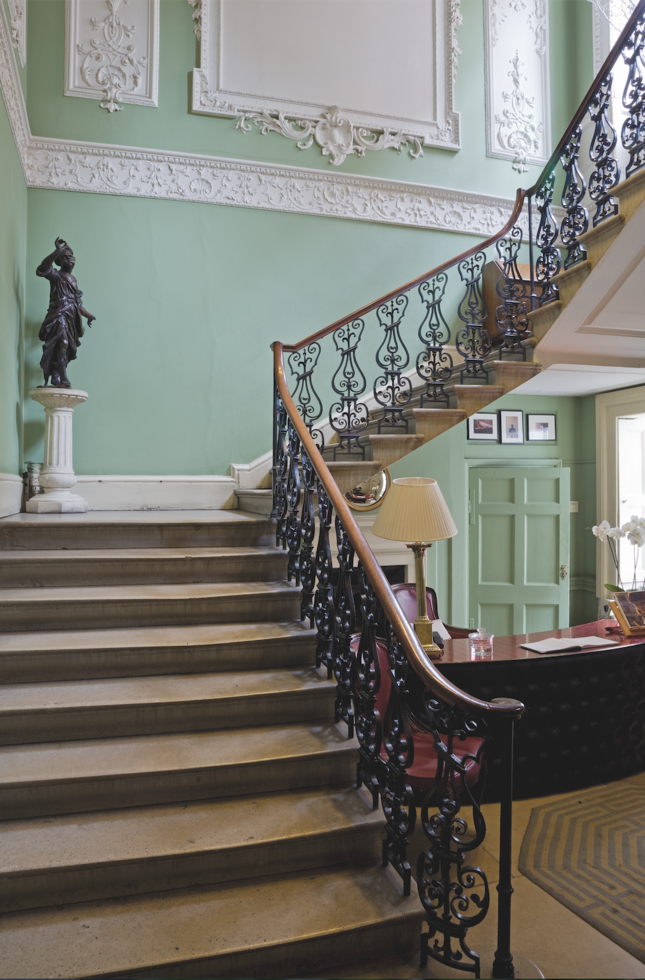 The plain exterior of the brick building at 1 Greek Street in Soho gives way indoors to exuberant rococo decoration on the ceilings, walls, chimneypieces, and elsewhere. The cake-frosting plasterwork dates from the middle of the 18th century, when the residence was owned by Richard Beckford, whose fortune derived from sugar produced by slave plantations in Jamaica. Since 1861, though, the house has belonged to a nonprofit that works to help people experiencing homelessness. Today, the group uses the buliding for special events, art displays, and a private members' club that helps fund the group's mission. Charles Dickens was a fan of the peaceful garden.

Great Houses of London ($40; 328 pages) by James Stourton with photographs by Fritz von der Schulenburg is published by Frances Lincoln and available at bookstores and from online booksellers.