Thank you for subscribing!
Got it! Thank you!
Home›Tips & News›Air Travel›New York City's Airport Dentist Looks Back on 30 Years in the "Smile High Club" 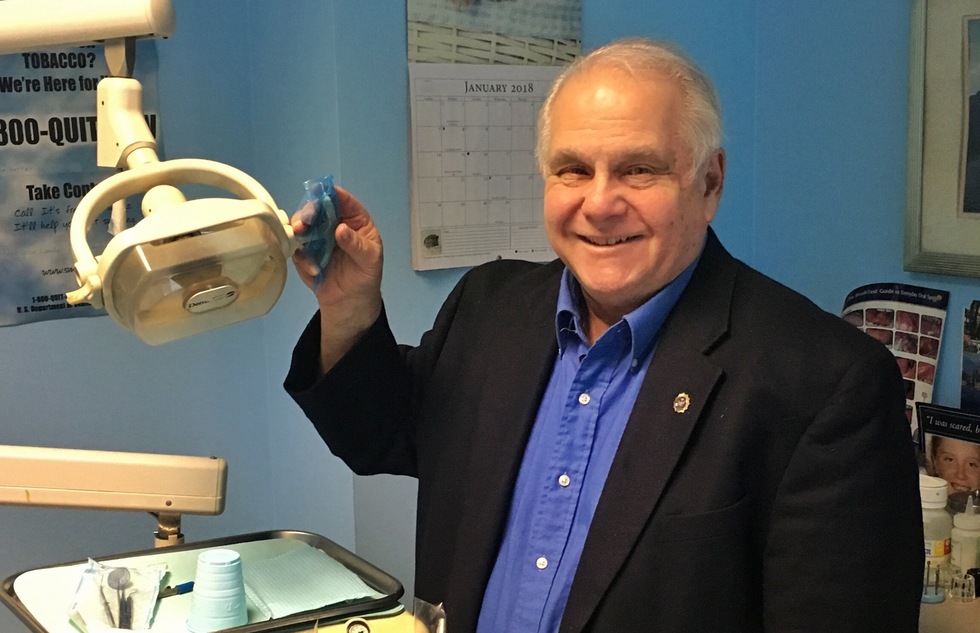 Did you know there are dental offices at New York City's LaGuardia and JFK Airports? Dr. Robert Trager has been tending to the smiles of airport personnel and passengers for three decades.

Here are some things you can do at New York City’s LaGuardia Airport before your flight: Stock up on Kardashian-bedecked gossip magazines. Shop for a neck pillow. And get your teeth cleaned.

You might not have known about that last service—even if you work at the airport. When we asked one American Airlines employee for directions to the dentist's office, we got a blank stare in return.

But it’s true: Dr. Robert Trager has been tending to the teeth of airport passengers and workers—though evidently not the one we found—at LaGuardia since 1991. His practice is on the upper level of Terminal B, near the American Express Centurion Lounge; just take the escalator behind the American ticketing area.

He’s been at it even longer across town at New York’s John F. Kennedy International Airport, where he’s had another office since 1985, first in the old International Arrivals Building, then in his current location in Cargo Area A inside Building 14, which also has a walk-in medical center.

The dentist says that business is robust and will continue at both airports after the completion of their big renovation projects—though after more than three decades, he’s finally started to consider stepping away. We dropped by Trager’s LaGuardia office for a chat about oral hygiene on the road, what it’s like to spend 30 years in airports, and the days when he could walk right onto the tarmac.

FROMMER'S: So how did this all start? How did you become an airport dentist?

ROBERT TRAGER: Years ago, my original office was on Farmer’s Boulevard in St. Albans, [Queens], close to Kennedy. I’d go out there [to the airport]—this was before security—and hand out cards and flyers. I’d go to all the terminals. I mean, I’d go to places where today they’d shoot you. I’d walk out on the tarmac. I’d go onto the planes.

[Later, Trager showed us a flyer with anthropomorphic cartoon airplanes and a heading that reads, “Join the Smile High Club.”]

There was always a dentist there for years. It was a small office in what they called the International Arrivals Building [IAB]. And this other dentist knew me, but he was going to retire. And he’d say, “You’re out here more than me. Why don’t you buy me out?” So I bought him out for next to nothing and I fixed it up and made it a full-time practice. And then someone said, “Why don’t you do LaGuardia?” That was four or five years later. So I figured, why not? I told them you need a dentist there, it’s good P.R. for you, blah, blah, blah.

Your office at JFK was moved?

Originally I was in the IAB but they tore that down. They wanted to put me in a sterile area on the other side of the gates, which would mean that the only way you could get to me was you had to go through security. I said, “That’s crazy.” So I went over to Building 14, where they had a big open space. It works out good.

Who are your patients predominantly? Are they airport personnel? Passengers?

When I was in the old IAB, I’d get a lot of passengers ‘cause I was in the international terminal. Now I’m in this other building. You don’t get as many passengers, but if there are emergencies the airlines will say there’s a dentist here. So they’ll take a bus over or a lot of times we’ll just pick them up.

I’d say 95% of patients are the people who work here. Why? These are like little cities. At Kennedy, you’ve got over 30,000 people that work there. They’re open at least 20 out of 24 hours. There’s constantly people who need work, and they all have good dental plans. They’ve got good unions. And it’s convenient. They come for full service because they’re covered for it. The key thing for me is there’s no competition.

You said passengers come in with emergencies. What’s the most common?

The most common is something like a filling falls out or they have an infected tooth or swollen gums, or a denture broke or it’s irritated. What brings them in is pain. Or what happens is they land and they have a problem and they come here. Or they might be walking around [at LaGuardia] because there’s always a lot of flight delays, and they see a dentist sign downstairs. Years ago I had a diplomat from Canada who was wandering around and she couldn’t believe there was a dentist so she said, “Let me get my teeth cleaned while I’ve got all this free time.” You never know who’s going to pop up.

What’s some of the strange stuff you’ve seen here?

Years ago at Kennedy, people were waiting for their baggage and these young kids tried to jump on the baggage carousel and it knocked their teeth out. They came in bleeding.

But here’s one of the wildest: A lady was going to Italy and she had an emergency, and I had her fill out all the forms. And I see that it says she lives in Santa Monica and she’s a schoolteacher. I said, “My brother lives there with my nieces.” And she says, “Trager? Is your niece Terry?” [We changed the name.]

I said, “Yeah.” She said, “Oh my God, I called in sick and said I couldn’t go in for the week to teach, but I’m going to Europe. Please don’t say anything!” My niece was a student of hers!

Did you tell your niece?

How much longer do you think you’ll be doing this?

I’m 78. I’ve been out of dental school 52 years now. So when you think about it . . . Let’s just say I’m entertaining offers for people buying me out.

Do you expect the practice to continue on?

What should travelers know about taking care of their teeth on the road?

If you have loose fillings or fillings that fell out, there’s a thing called aerodontalgia. That means that when you’re high on an airplane at 30,000 feet, the gases expand and if you have an open tooth—with a loose filling, for example—the gases get in there and expand and you get a huge terrible toothache because of the pressure.

Also, when you go to different places you always want to use the same oral hygiene techniques you do at home—brush at least twice a day, floss, and so forth. A lot of foreign places may have sticky foods which can cause plaque. Good oral hygiene is important no matter where you go.

And get the small toothpaste so TSA won’t take it away.

Trager and his unique practice were featured on a 1988 episode of NBC's Late Night with David Letterman that was taped entirely at JFK. In the clip below, you'll note that the host does not seem to welcome the dentist’s foray into prop comedy.