Thank you for subscribing!
Got it! Thank you!
Home›Tips & News›Air Travel›Why You Definitely Shouldn't Eat Pretzels on an Airplane 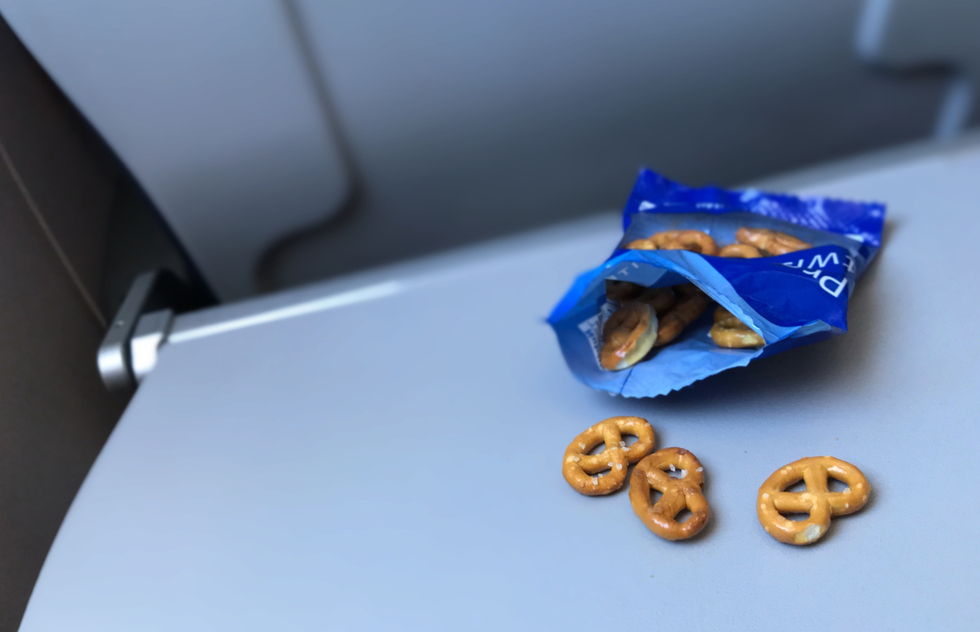 Why You Definitely Shouldn't Eat Pretzels on an Airplane

Salty snacks such as pretzels and potato chips are especially ill-suited to flying. Here's why—and what to eat instead.

We know it's hard to imagine an airline doing anything that would cause passengers to experience physical discomfort in the skies, but trust us on this: Those free pretzels offered by flight attendants could very likely make you feel crummy.

There are at least two reasons for this, both having to do with the tummy-troubling effects of flying and how the high levels of sodium in packaged salty snacks such as pretzels, nuts, and potato chips make things worse.

The Trouble with Salty Snacks in the Skies

First, there's the matter of bloating.

As registered dietician Tamara Duker Freuman explains in U.S. News & World Report, "Air pressure decreases at higher altitudes, and the basic laws of physics (Boyle's law, to be precise) dictate that gases expand as air pressure decreases." The rapid increase in altitude during a flight may also draw more gas into your gut.

Consequently, you may feel an uncomfortable internal pressure that can be exacerbated, Duker Freuman writes, "as the result of food choices."

"When you eat foods that are high in salt, your body holds onto fluids you eat and drink," according to the Cleveland Clinic. "That can make you feel bloated."

And that's at ground level. Think how much worse the situation gets when the gases in there are already inflating from the altitude.

Another problem is the extremely dry air in plane cabins, which puts you at heightened risk of dehydration and its unpleasant symptoms, including nausea, headache, and dizziness.

Salty snacks can hurry along the dehydration process as well, especially if you're not drinking enough water. High levels of sodium require the kidneys to keep more water in the system, as Popular Science puts it, and "not drinking enough could force the body to draw water out of other cells."

Or, as the Seinfeld gang put it (repeatedly), "These pretzels are making me thirsty."

What's more, studies have found that our ability to taste salt dulls at 30,000 feet due to the changes in humidity and air pressure. So you could ingest more of the stuff than usual without realizing, thus worsening its negative impact.

What to Eat Instead

You may want to bring those items from home or search for them at the airport rather than rely on what's on the flight attendant's beverage cart, where healthy snacks are hard to come by. (We hate to break it to you, but Biscoff cookies aren't good for you, either.)