Thank you for subscribing!
Got it! Thank you!
Home›Tips & News›Hotels›10 Hot New U.S Hotels Opening in 2017 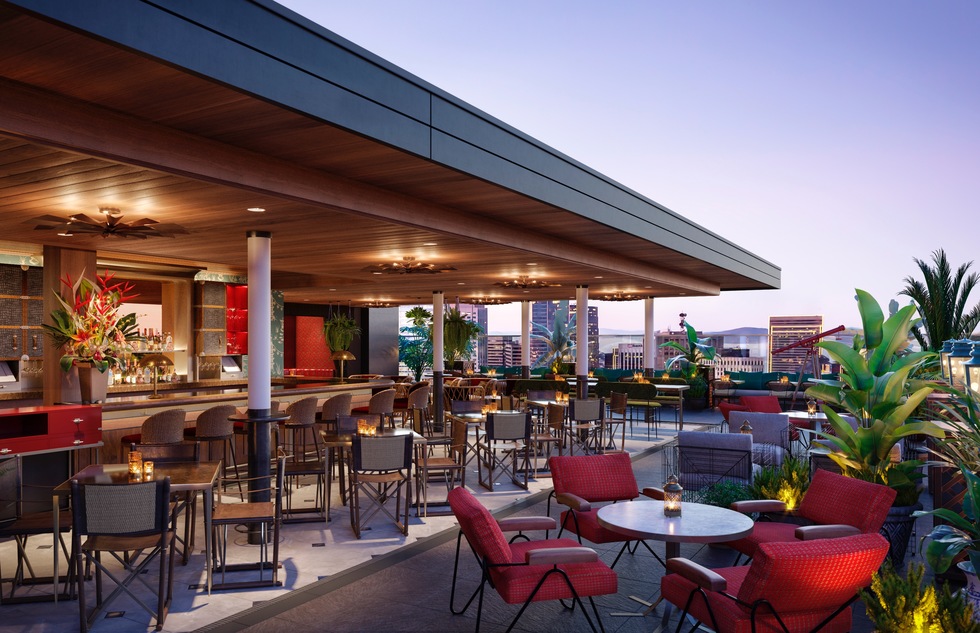 2017 is only a few months old, but if you’re already in need of an escape or even just a happening place to get a drink, these hot new hotels open soon.

The opening dates are tentative as hotels are notorious for delays. For advance reservations, it’s best to make your booking over the phone so someone can assure you that the hotel will open by your travel dates. Or hold off until you know for sure the hotel is arriving on schedule.
VIRGIN HOTEL SAN FRANCISCO
At long last, there’s a Virgin it’s decent to sleep with. Virgin Hotels, the lifestyle hotel brand of the Virgin Group (which includes Virgin Atlantic airlines), will open its second hotel this summer in San Fran’s South of Market neighborhood. (The first Virgin opened in Chicago in 2015.) The hotel will have 196 “chambers” (Virgin-speak for guest rooms, with sliding doors that separate bedroom from bathroom); The Commons Social Club lobby hangout; more than a few places to eat, drink, and caffeinate; and a rooftop bar (pictured, above).
Opening: Summer 2017
virginhotels.com

THE LINE HOTEL, Washington D.C.
A second outpost of Los Angeles’ Koreatown hotspot, The Line Hotel, will open in early May within a historic 1912 church in the lively Adams Morgan neighborhood of D.C. The church’s pews have been up-cycled into lobby seating while the 220 guest rooms elicit a turn-of-the-20th-century vibe. Yet there are still modern touches such as free Wi-Fi, 55” HDTVs from which you can stream your music and movies, and spunky artwork. Downstairs, three restaurants will be run by notable chefs—A Rake’s Progress from Spike Gjerde, which will serve Mid-Atlantic local fare; Brothers and Sisters from Erik Bruner-Yang, serving American classics with a Taiwanese twist, and Spoken English, also from Bruner-Yang which will be tasting-menu focused. Rates start around $350 a night in early May.
Opening: May 2017
thelinehoteldc.com
THE LIFE HOTEL, New York City
When the now-defunct LIFE Magazine was first published in 1893, the company housed its writers and artists in apartments above the magazine’s offices at 19 W. 31st Street. Today, LIFE has been reduced to an online photo bank on Time.com, but its historic headquarters in the NoMad nabe are coming back to, er, life, as a chic boutique hotel. Opening in April, the 98-room hotel will have contemporary style rooms with vintage and historic touches like brass frame beds and original molding. Amenities include large flat-screen TVs with Google’s Chromecast streaming system, free Wi-Fi, and morning coffee or tea. Downstairs will be a “vegetable-centric” restaurant from Chef Michael Vignola. A basement bar will also serve cocktails similar to the ones LIFE magazine staffers sipped when the space was used as a speakeasy in the 1920s. Rates start at $249 a night in April. 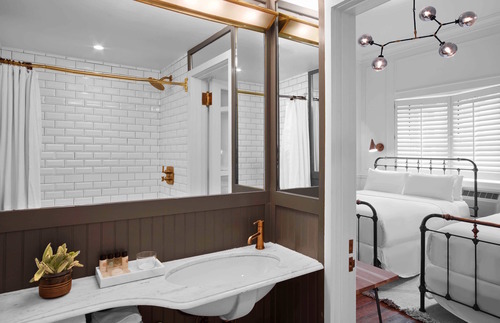 ACE HOTEL CHICAGO
Ace Hotels is bringing its carefully thought-out hipster approach to hotel living to Chicago later this year. The 159-room Ace Chicago will open at 311 North Morgan Street inside an old Italian-American cheese-making factory. But this West Loop locale is far from outdated, as Google’s Midwest headquarters are right across the street. The hotel will have an outpost of Stumptown Coffee Roasters (a usual venue for Ace Hotels, but this will be the first Stumptown in the Midwest), and a full-service restaurant, and eventually, a rooftop bar and terrace. You can get a sneak peek of the rooms on Instagram, but they don’t stray too far from the Ace’s favored look, which is often an updated take on mid-century modern.
Opening: Fall 2017
www.acehotel.com/chicago
KIMPTON LA PEER HOTEL, West Hollywood, CA
Tucked away on a quiet street near WeHo’s buzzy Design District between Melrose and Santa Monica, the La Peer Hotel, opening in May, will be a new swank sanctuary for visitors to La-La land. The 105 guest rooms and suites are blanketed in calm, soothing colors and outfitted with giant soaking tubs while the lush pool deck is an urban oasis in itself. Casey Lane, the chef behind Venice Beach’s popular Tasting Kitchen, will debut a new restaurant concept within the hotel. Kimpton Hotels will also open a second hotel in Los Angeles in April. The Everly, which will be situated by Hollywood and Vine and near a handy Metro stop, will have 216 rooms, a fifth-floor pool deck, and a street-level café.
Opening date: May 2017
www.lapeerhotel.com 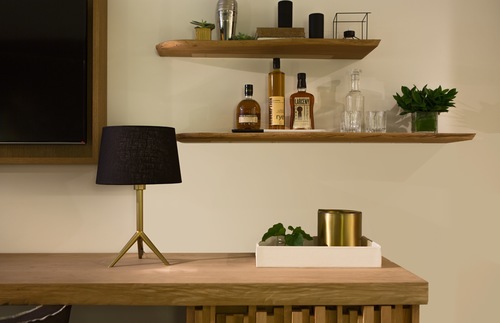 Kimpton La Peer Hotel, West Hollywood, California
POD HOTEL BROOKLYN, New York City
Looking for a place for you and a few friends to crash in Williamsburg? When the Pod Hotel opens later this spring, you’ll be able to choose from 249 modular guest rooms with a mix of bunk beds and queen beds. Keep in mind, these rooms are tiny, averaging about 100 square feet. However, the focus will be on the social spaces, including another outpost of Salvation Taco (the midtown Pod39 has the first location), a rooftop hangout, a sidewalk café, some retail stores, and not one but three inner courtyards. Best of all, rates will be on the “affordable” side for Williamsburg—around $125 a night.
Opening: Spring 2017
thepodhotel.com/locations/coming-soon/
HOTEL INDIGO LOS ANGELES DOWNTOWN
Another shiny new hotel is coming to a Los Angeles’ neighborhood that’s finally getting some attention. Hotel Indigo is within walking distance to L.A. Live, downtown’s entertainment district (for real, not theoretically), and it also boasts a few cool amenities of its own such as a grand circular entrance (a rarity for a downtown hotel), sleek guest room bathrooms, stunning photo murals behind the beds, an outdoor pool deck, a mod lobby, and an 18th floor cocktail lounge with killer views of the city.
Opening: April 15, 2017
www.ihg.com 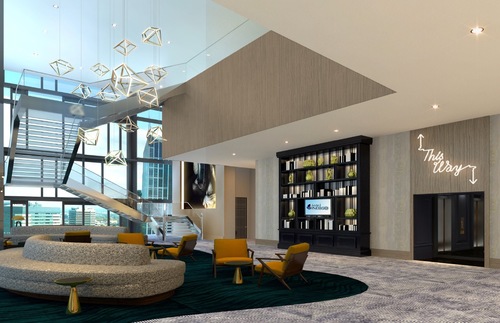 21C MUSEUM HOTEL NASHVILLE
Many hotels brag about their art collections, but 21c Museum Hotels is serious about incorporating contemporary art into a stay. Its newest property in Nashville will open in May in the city’s historic Gray & Dudley Building. The hotel will have 124 rooms; several rooftop suites with outdoor terraces; a restaurant, bar and lounge from Chef Levon Wallace; and most importantly, approximately 10,500 square feet of exhibition space. The museum will be free of charge to the public, and of course, the guests. Rates start at $299 a night.
Opening: May 14, 2017
www.21cmuseumhotels.com/nashville/
SAGAMORE PENDRY BALTIMORE
Fresh off opening its first-ever hotel in San Diego, Pendry Hotels is now readying an East Coast debut in Baltimore. Sagamore Pendry, set to open on March 20, will have 128 “modern luxury” guestrooms situated on Recreation Pier in the city’s Fell’s Point neighborhood. All guests rooms feature floor-to-ceiling windows, leather sofas, and high-end bathrooms. The very in-demand NYC-based chef Andrew Carmellini will oversee the Rec Pier Chop House restaurant while The Cannon Room bar will serve curated whiskey, rye, and bourbon cocktails. In the summer, when the weather warms up, guests can take their libations out to the pool deck and grill. Rates start at $305 a night.
Opening: March 20, 2017
www.pendryhotels.com/baltimore/
WASHINGTON PARK HOTEL, Miami Beach, FL
Technically, this hotel soft-opened in 2016 but it recently unveiled the final transformation from an old Art Deco property on Washington Avenue into the happening 181-room Washington Park Hotel. That final reveal included a new outpost of Manhattan’s trendy Employees Only bar, serving up classic cocktails, late-night eats, and the predictions of a psychic. The hotel has the usual Miami Beach leisure amenities like a pool, ping-pong, and bocce ball, and rental bikes, but it also ferries guests around town in an electric, three-wheeled Tuk Tuk shuttle. Rates start around $225 a night.
Opening: Now Open
www.wphsouthbeach.com 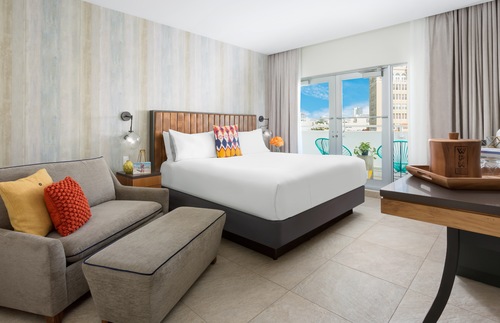