Thank you for subscribing!
Got it! Thank you!
Home›Tips & News›Hotels›3 Alternatives to Miami Beach’s Party Hotels 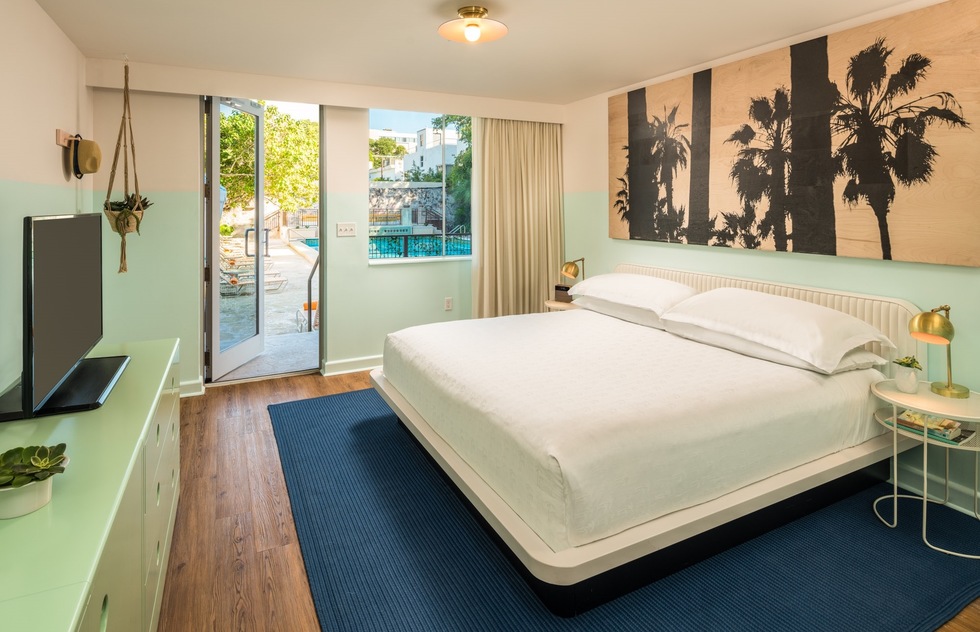 Taking in all that’s new in Miami Beach can be exhausting. If you don’t want to deal with the hyped-up party scene or the impersonal service of a too-big resort, here are three laid-back hotels to try.

In the past decade, the mercurial town of Miami Beach, which offers a melting pot of cultures from Cuba, South America, and the Caribbean, has rapidly grown to become a year-round hotspot, thanks to an influx of new hotels, happening restaurants, meaningful art and design, and revitalized neighborhoods. But it's hard to find a chill place to stay on the beach, where the massive oceanfront resorts keep the partying going all night, and day, long. Check into these instead.


As the first East Coast hotel for the Californian brand, Joie de Vivre, The Hall combines California casual with Caribbean flair. The hotel has an Art Deco pedigree—it was built in the 1940s as an apartment building—and it still has many architectural design points of that era. But the 163 guestrooms, spread across three separate buildings, have been livened up with tropical colors, fun prints, lacquered furniture, beachy artwork, and modern amenities such as free Wi-Fi and flat-screen TVs. Design nerds will also dig the Jonathan Adler toiletries in the bathrooms.
Staffers are down-to-earth, wearing tropical print shirts, and Top Chef alum Spike Mendelsohn has created a quirky tropically inspired menu at Sunny’s restaurant. While the beach is just across the street, The Hall does have its own lively pool scene, complete with cabanas and blow-up rafts in the shapes of swans and donuts.
Guests won’t have to walk far to explore Miami. Situated at 15th and Collins, The Hall is firmly in the middle of Miami Beach. But if guests want to take in The Hall’s chill vibe, they can pop into Holiday’s, the hotel’s enclosed Afro-Latin themed lobby bar which opens nightly at 5pm.
Rates start at around $250 a night with a $20 resort fee (sadly, most Miami hotels have these). 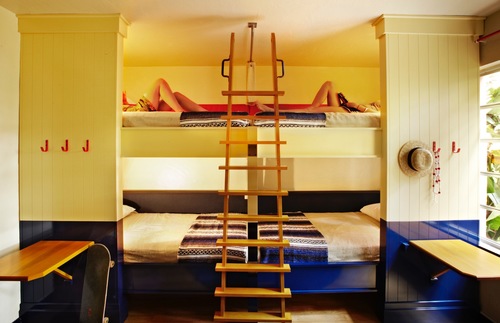 When the Freehand opened three years ago in the former Indian Creek Hotel (the historic sign is still up on the front of the building), it eschewed the bottle service club crowd, a bold move for a Miami hotel. But it’s exactly this laid-back vibe that has since made it so popular. Set back on Indian Creek Drive at 28th Street in Miami’s less frenetic Mid-Beach neighborhood, the Freehand offers 77 private and shared rooms, yet this isn’t your average hostel-hotel. Each room, including the shared rooms, have the design quality of a boutique hotel with crisp white linens, bold colors, and local Miami artwork, without the boutique hotel prices. And of course, there’s free Wi-Fi.
In the spirit of a traditional hostel, much emphasis is put on hanging out in the courtyard and pool out back, where the bohemian Broken Shaker bar serves hand-crafted cocktails made with fresh-pressed produce and homegrown ingredients. The hotel’s 27 restaurant is located in a historic house next to the courtyard serving fresh cuisine that mirrors the melting pot of cultures in Miami, amidst very vintage decor.
It’s the Freehand’s anti-scene attitude (and excellent drinks and food) that has actually made it quite the scene to hang out at, so rooms facing the courtyard may not be able to escape the noise.
Rates for a private room start at around $132 with an $11 nightly resort fee. Breakfast is included. 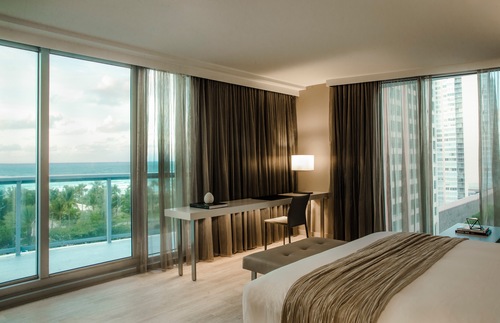 AC stands for Antonio Catalán, the Spanish designer whose eponymous hotel brand can be found in big cities across Europe. Now Marriott International is now bringing the brand’s European sensibility to the States, the first of which opened in Miami Beach last year. The hotel has 150 rooms that are high on style, comfort, and function while eliminating some traditional hotel amenities like a full closet and adding many modern ones like plenty of outlets and charging ports.
Each morning, a European spread—cured meats and cheeses—is served at breakfast, along with freshly baked croissants made using a dough that’s imported from France (breakfast is not included in the room rate). At night, guests can pop into the AC Lounge for craft cocktails and Spanish tapas. Up on the 8th floor roof deck is an Olympic-sized pool that overlooks Collins Avenue and has glimpses of the ocean while a second rooftop on the 3rd floor features foosball and ping pong tables and giant Jenga pieces. Several rooms are located on this floor too, with mini-terraces giving guests instant access to the fun. Also available to guests is the AC Store which sells snacks and drinks, including full-sized wine bottles which can be opened used the wine bottle opener that’s attached to the wall.
The AC is located across from Marriott’s luxury property, the Miami Beach EDITION, where guests can go for a nibble at Jean-Georges Vongerichten’s casual Market cafe or party at the Basement nightclub which also features a bowling alley and a small ice-skating rink. However, AC guests who want to sleep through the night should book city view rooms instead of ocean view rooms. That’s because these rooms look out directly at the EDITION where the club’s music is often pumping until well into the early morning. That’s Miami, all right. As Gloria Estefan once said, the rhythm is gonna get ya.
Rates start at around $250 a night.
Beach & Water Sports
Hotels