Thank you for subscribing!
Got it! Thank you!
Home›Tips & News›Hotels›A Former Floating Prison is Now London’s Hottest New Hotel 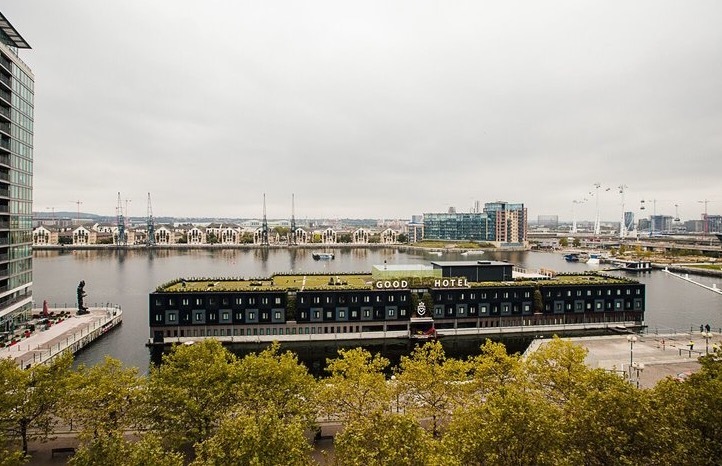 The Good Hotel wasn't always so good—in fact, it was a jail. But it's a fantastic way to stay on the River Thames in London.

It boasts all the trappings of a trendy design hotel: stripped-down post-industrial spaces, sleek modern furniture, iPads in place of TVs, a rooftop bar serving up local craft beer.
But the Good Hotel London isn't your typical boutique property—it is, in fact, a former prison barge.


Transported across the North Sea from its home in Amsterdam, the 148-room floating hotel—once a detention center for illegal immigrants in the Netherlands—is moored at the Royal Victoria Dock in East London's Docklands, not far from the site of the 2012 Summer Games and City Airport, for the next five years.


It’s the brainchild of Dutch entrepreneur Marten Dresen, who in 2015 transformed the abandoned barge into a pop-up hotel on the banks of Amsterdam’s IJ River. He enlisted two hot young Dutch designers, Remko Verhaagen and Sikko Valk, to repurpose and renovate the space, turning it into one of the city’s hippest hangouts. But Dresen didn’t just want to create something chic. He also wanted to do good—thus the name, Good Hotel, a hotel with a social mission.


At the core of the non-profit venture is the staff, made up of long-term unemployed people from the community who receive customized hospitality training and on-the-job experience. All profits from the hotel are reinvested back into the training program with the ultimate aim of helping locals secure permanent jobs in the hospitality industry.


“We recruit people who may lack basic skills or experience but who are willing to make a change,” says Good Hotel’s Director of Training Mireille Goos. “We educate them in all sectors—housekeeping, food and beverage, front office and technical aspects. Then they are transitioned out after several months to internships and full-time jobs.”


In Amsterdam, the year-long pop-up employed more than 100 locals, 70 of whom, according to Goos, found permanent positions in area hotels, including in the NH and Accor brands.
Another aspect of the training: encouraging employees to share their knowledge with the guests. “We want our staff to be approachable, to interact with the guests and help them discover things only they know about the local community,” says Goos. “It’s a very human, very personal touch that you won’t necessarily find at a corporate hotel.” 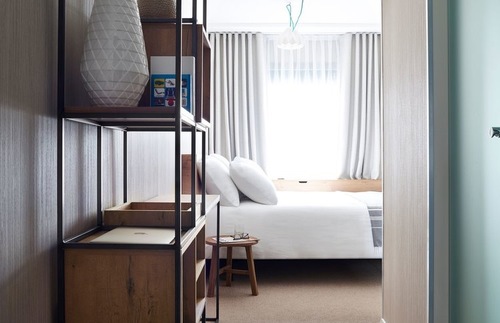 As for the rooms, remember: Good Hotel was once for inmates. “Cozy” is the term the website uses, though at 139 square feet, “tiny” might be more apt. (You may want to spring for one of the four larger rooms, which are a respectable 322 square feet.) The saving grace? Rates are shockingly affordable for London: £100 for a standard room (with twin or double beds; that was US$125 as of November 2016), £130 for a deluxe room (with a king-size bed and water views) and £180 for the bigger corner rooms. And those rates won’t fluctuate: “We put cap on it no matter what time of year or what events are going on,” says Goos. “We want to stay honest and fair to our guests.”

Though the rooms are small, the common areas are anything but. The sprawling open-plan “living room” features comfortable seating areas with classic Dutch-designed sofas and chairs along with communal tables that offer an ideal workspace for both guests and locals. There’s also a spacious bar and restaurant that will partner with area businesses to serve locally sourced food and beverages.


But the real draw will be the massive rooftop cafe—a High Line-inspired green roof newly built for the London location with views of the Canary Wharf section of the city and the Thames.


The Good Hotel plans to open eight more properties by 2020. The most recent outpost opened in Antigua, Guatemala, with 20 rooms in a renovated former mansion.
Hotels