Thank you for subscribing!
Got it! Thank you!
Home›Tips & News›Hotels›How to Sleep Better in a Hotel: Advice from Scientists 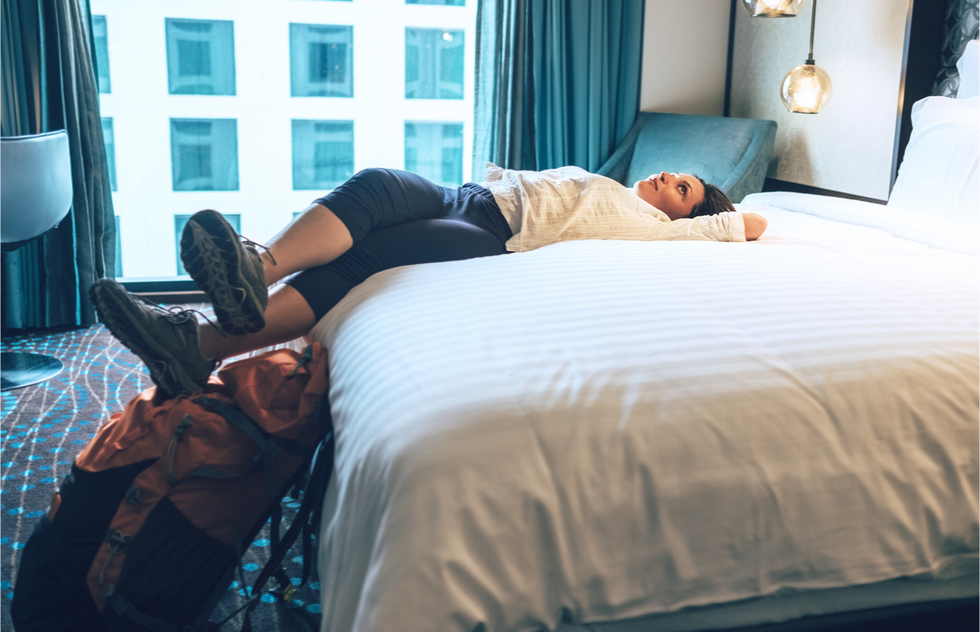 How to Sleep Better in a Hotel: Advice from Scientists

Getting real rest on the road can be difficult. We spoke with two sleep experts for advice.

When it comes down to it, a hotel's primary function is to serve as a venue for sleeping.

But many hotels fall short when it comes to shut-eye. Travelers regularly complain about sleep disturbances on the road.

To be fair, a big part of the problem has less to do with hotels and more to do with how the human brain is wired.

In a study from Brown University, scientists found that when we try to sleep in an unfamiliar place, both sides of the brain don't go into slumber mode as they do at home. Instead, the left hemisphere stays alert, preventing the kind of deep sleep that nourishes the sleeper. This disruptive asymmetry is called the "first-night effect" because snoozing is noticeably worse on the first night somewhere new and then tends to improve as your brain adjusts.

"It’s basically like sleeping with one eye open because your Spidey senses are constantly on," says Sara Mednick, a professor of cognitive sciences at the University of California, Irvine, and the author of the upcoming book The Power of the Downstate: Recharge Your Life Using Your Body's Own Restorative Systems.

When you're in a hotel, "you’re in a new environment—new bed, new smells, new sounds," as Mednick puts it. "And even though you may lock the door, there are questions of Am I safe? Am I really safe? There are a lot of strangers in this building.”

To get to sleep, you need to calm the instinctual part of your brain that perceives potential threats. Fortunately, "you don’t have to really do that much," according to Mednick, "because that reptile brain is not that intelligent. It doesn’t need a lot of psychology—it just needs to have certain information blocked."

Here are some expert tips for staging a hotel room to avoid the triggers that tell your body you're out of your comfort zone, along with other things you can do to make a hotel room the perfect space for a snooze.

We'll lead with the nose.

"The olfactory sense is especially alert in new spaces," Mednick says. She recommends doing what you can to bring the smells of home into your hotel room, whether that means packing a candle, some potpourri, a shirt you usually wear to bed, or something else that will trick your brain into thinking you're at home. By doing so, you not only may fall asleep faster—you'll also stay asleep.

"Smells can affect things that we have no idea about and they really get turned on during sleep," she says. "[Smells are] huge reminders, and can make you feel safe or unsafe, without you realizing it or even being awake."

Turn down the thermostat.

Rebecca Robbins, an instructor in medicine at Harvard Medical School and a sleep scientist at Brigham and Women’s Hospital in Boston, co-authored an academic study examining the hotel attributes that affect guests' sleep. One of the main findings was that travelers were often disturbed by their inability to control a hotel room's temperature. Rooms that were too hot, in particular, kept many people awake.

"Ideally, a room should be between 65 and 68 degrees Fahrenheit" to get the deepest sleep, Robbins told me. "If your room is too hot and you're not in a loud place, open the windows if you can. That will help with the temperature and will also get the air circulating regularly so you don't have a feeling of stuffiness, which can hurt your ability to sleep."

"It's so soothing to be immersed in the tub before slipping between the sheets," she says. "There’s nothing more decadent! If you don’t have a soaking tub, take a nice hot shower."

There's science to back up that tip, too. "We do believe that there's a benefit from going from the warm to the cold," says Robbins. "A drop in the body temp is associated with sleep onset, so you accelerate the process when you take a bath or shower."

BYOP (Bring your own pillow).

The most cited barrier to good sleep in Robbins's study was lousy pillows. In fact, study participants who complained that the pillow wasn't to their liking were three times more likely to report poor sleep.

Bringing your own pillow can be a good solution. "Doing so is killing two birds with one stone," Mednick notes (we hope your pillow is softer than stone). "If your head is always on the pillow then you’ll always have that [home] smell and that’s very evocative."

If you can't bring your own pillow, Robbins recommends booking hotels that have pillow menus, which allow guests to choose the support or softness they prefer. Back, side, and stomach sleepers often have very different needs, pillow-wise.

Of course, you can't lug a mattress with you to a hotel and most of us aren't going to bring our own bedsheets—the second and third most common reasons for poor sleep in Robbins's study.

But many hotels now make quality bedding a hallmark of their brands—good news for travelers, according to Robbins. "Find a hotel that clearly makes guest sleep a priority," she advises. "You can often see when a hotel's website has a focus on sleep."

Which hotels have the best sheets and mattresses? There's certainly no shortage of brands claiming to be the gold standard for sleep.

Rosewood claims the high-tech "Restorative Bed" enables "the ideal sleep experience by learning sleeper’s support and temperature preferences, and adjusting in real time, throughout the night."

Meanwhile, New York's Equinox Hotel touts its "proprietary sleep system" involving luxe beds, pillows, and sheets. If those don't do the trick, Equinox has a "sleep coach" on call.

Of course, the sky-high rates at those luxury hotels might keep you up at night. Fortunately, many less exorbitant chains also make an effort to make you drowsy, with offerings from Westin's "Heavenly Bed" to Hilton's custom-made Serta mattress.

Sleep Advisor ranks the top hotel mattresses you can buy, but it's also a good cheat sheet for the quality of mattresses hotel chains use for guests.

On the sheets front: You could ask the hotel you're interested in how recently the sheets were replaced. Generally, the newer the linens, the crisper they'll feel.

Yes, it's tempting to unwind at the hotel bar, but liquid intake is a no-no around bedtime.

"I really recommend stopping all liquids, including alcohol, three hours before bedtime," Mednick says. "Alcohol messes with your sleep, so it’s good to have basically processed most of the alcohol before bedtime."

It's not just booze that can cause problems, though.

"When we’re young, we have a really strong circadian rhythm that blocks our urinary urges all night long," Mednick explains. "But as we get older, our circadian rhythms get dampened ... and so we need to pee more often. So having any amount of liquid three hours before bedtime increases your chances of having to get up in the middle of the night."

Noise from both within the hotel and without can keep guests awake. But there are strategies for avoiding both types of disturbances.

"Enlist the help of the person at the front desk," Robbins advises. "Tell them, 'I really need to get a good night's sleep. Can you put me in a really quiet room?'"

Generally, the quietest rooms will be in areas with the least hallway traffic. So if you have the option to pick your own room, look for one that's nowhere near the elevator, the ice machine, or the housekeeping supply closet. Also avoid connecting rooms if you don't know the people on the other side. The doors between connected rooms often bleed noise.

Avoiding noise from outside the hotel can be trickier, especially in urban areas. Keep in mind that hotels near highways usually have noise issues. Ditto for properties next to hospitals and fire stations due to the sirens.

The best course of action? Both experts recommend packing earplugs.

"Earplugs are to me essential because your reptile brain is paying attention to any little sound and hotels have tons of little sounds," says Mednick.

"The thing about travel," Mednick says, "is that you’re exposing yourself to light at night, and light at night is the biggest signal for your circadian rhythm that it’s not nighttime."

To counter this signal disruption, make like Corey Hart and wear your sunglasses at night.

Mednick recommends dark glasses after 6pm or, better yet, glasses that block the blue light emitted by computers, phones, and other electronic devices. (She prefers Swanwick glasses for that).

"You can start wearing [the glasses] on the plane at 6 o’clock and all the way through to where you’re in bed," Mednick says. "Have them on hand so that your whole evening doesn’t have exposure to blue light."

Robbins is also adamant about lessening exposure to blue light in the evening. "I know this sounds crazy, but I bring gaffer's tape with me when I travel, to cover all of those little lights on electronics in hotel rooms today," she says. "They're blue light, which is the worst for sleep."

Other light issues? A lack of blackout curtains could mean an earlier wake-up than desired, as can curtains that don't fully close. You can call the hotel in advance to ask if rooms are equipped with blackout curtains, but the best thing to do might be to bring a comfortable, well-fitting sleep mask.

We know, we know. That's a lot of advice and a lot to pack.

But the basic strategy comes down to fooling your subconscious into thinking you're at home. If you can do that, you should be able to sleep.

"Part of sleep is just habit," says Mednick. "Keep your evening rituals as much as possible, and make the hotel setting in time and space and habits as close [to home] as possible."

If all else fails, you can try inducing deep sleep by doing the muscle relaxation exercises led by Dr. Sara Mednick in the audio version of her earlier book, Take a Nap! Change Your Life.

You may also like to read: How to Sleep on a Long Plane Flight: 24 Tips You Should Try