Thank you for subscribing!
Got it! Thank you!
Home›Tips & News›News›Earthquakes in Italy, Hyatt Revamps Loyalty Program, and More: Today's Travel Briefing 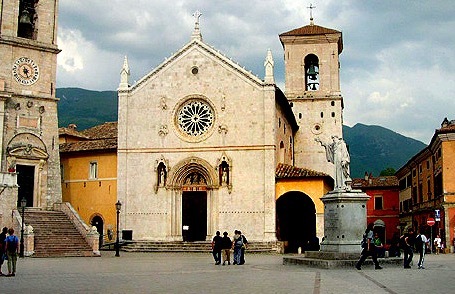 Good morning, everybody! Here's the latest from the world's hotels, villages, and airport runways.

On March 1, the Hyatt Gold Passport will be replaced by the World of Hyatt program, which will have three tiers of membership instead of the Gold Passport's two.

But the main difference has to do with how loyalty points will be rewarded. Rather than basing status on the number of stays, World of Hyatt members will accrue perks (room upgrades, expedited check-in, and so on) according to the number of nights and the amount of money spent at Hyatt hotels.

So, for example, whereas you reached Hyatt Gold Passport's lowest tier after five stays or 15 nights per calendar year, qualification for World of Hyatt's bottom tier requires 10 nights or 25,000 points per calendar year, with 5 points given for each dollar spent at the property.

In other words, you'll earn membership perks faster the more stuff you buy at the hotel—which might be fine for, say, business travelers, who can often charge hotel meals and other services to their companies.

But budget-conscious guests paying their own way are liable to earn rewards points at a slower clip, even if they stay at Hyatt hotels every time they travel.

Which makes the program less a reward for loyalty than for having deep pockets.

* FOLLOWING EARTHQUAKES, IS IT STILL SAFE TO TRAVEL TO ITALY? (Condé Nast Traveler)

The 6.6-magnitude earthquake that hit central Italy on Sunday—the country's largest since 1980—was only the latest in a series of tremors that have shaken Italy since summer.

Just days before the quake in Norcia (pictured above, several years before the tremor) destroyed historic buildings, left thousands of people homeless, and injured more than a dozen (though no deaths were reported), there were back-to-back earthquakes in Macerata, each with a magnitude higher than 5 on the Richter scale. And in August, a quake in Amatrice killed 300.

Seismologists blame the recent activity on stresses in the Apennine Mountains' fault system, which can cause a ripple effect and aftershocks for years to come.

Does this mean it's no longer safe to travel in Italy?

Well, it's important to remember that, owing to the two tectonic plates pushing against one another in the southern part of the country, earthquakes here are nothing new. Over the centuries, the big cities and major tourist attractions have figured out ways to minimize the damage (though smaller towns might be less prepared).

What's more, the seismic activity has not as of yet prompted the U.S. State Department to issue a Travel Alert or Warning about visiting the country.

In short, that Roman holiday should still be a go.

When a campaign plane carrying Republican vice presidential nominee Mike Pence skidded off the runway during a rainy landing at New York's LaGuardia Airport last week, no one on board was injured.

And for that, they can thank the airport's "arrestor bed," a block of lightweight, crushable cement designed to collapse under the weight of a plane in order to slow it down after it overshoots the runway.

You can find arrestor beds at the ends of more than 100 runways at U.S. airports including Boston Logan, Chicago Midway, and San Diego International.

Federal Aviation Administration guidelines call for safety areas that extend 1,000 feet beyond the end of each runway, but in airports—like LaGuardia—built before the standards were implemented, other solutions had to be found.