Thank you for subscribing!
Got it! Thank you!
Home›Tips & News›News›New National Monument Under the Atlantic, Shark Attacks in Florida, and More: Today's Travel Briefing 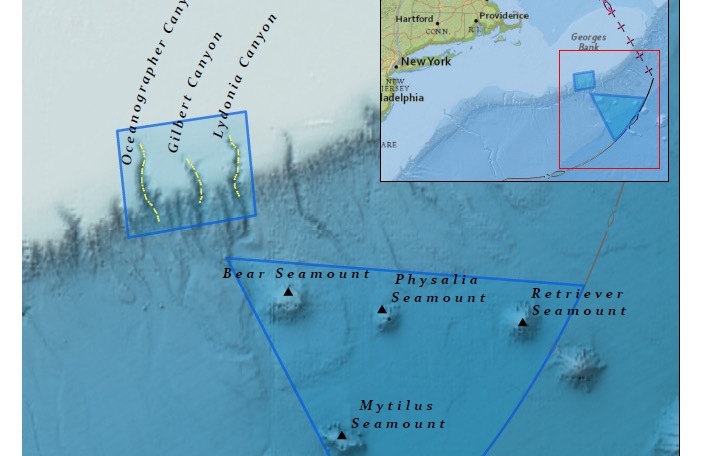 Good morning! Here are the latest happenings from the world's skies, oceans, and beaches.

* OBAMA DESIGNATES UNDERWATER MONUMENT OFF THE COAST OF NEW ENGLAND (Washington Post).
Last week President Barack Obama designated 4,913 square miles off the coast of New England as a new marine national monument, creating the first fully protected area in the U.S. portion of the Atlantic Ocean.
Located along the continental shelf about 130 miles southeast of Cape Cod, the Northeast Canyons and Seamounts Marine National Monument encompasses huge underwater chasms and towering peaks rising up to 7,000 feet from the ocean floor. The site is inhabited by coral, sharks, sea turtles, sperm whales, and other deep-sea creatures.
(Map by National Oceanic and Atmospheric Administration/Wikimedia Commons)

Several fishing groups opposed the president's move, arguing that the protected waters would have a negative impact on their efforts to catch mackerel, lobster, red crab, and other species nearby.
Proponents say, however, that recreational fishing can continue around the monument; it's only seabed mining and other extractive activities—which research indicates can harm vulnerable deep-sea life—that will be banned.

* NEW COMMUNICATION SYSTEM FOR PILOTS AND AIR-TRAFFIC CONTROLLERS WILL MAKE FLIGHTS FASTER AND SAFER, FAA SAYS (NBC News). Federal Aviation Administration officials say that a new communication system used by pilots and air-traffic controllers is helping flights move with more speed and safety.
The system, called DataComm, sends text messages and computer file transfers about flight routes, traffic, and weather directly to the cockpit, replacing back-and-forth radio conversations between pilots and controllers.
According to the FAA, that trims a 15-minute process down to a few seconds.
And when events like bad weather and reroutes come up, controllers can now notify numerous aircraft about changes at the same time, instead of talking with each pilot separately.
Plus, since the system doesn't rely on radio waves, there's less chance of dangerous miscommunication thanks to garbled voices.
Eight U.S. airlines and 17 international carriers currently have plans to add DataComm to their planes. By the end of the year, 50 airports are expected to have the new system up and running.

* THREE SEPARATE SHARK ATTACKS IN THREE HOURS ON FLORIDA BEACH (Associated Press). During a three-hour period on Sunday morning, three surfers were attacked by sharks in separate incidents on the same stretch of New Smyrna Beach in Florida.
First, a 43-year-old man was bitten on the lower leg. Then, half an hour later, a 36-year-old man was bitten on the hands. Just two hours after that, a 16-year-old boy was bitten on the inner thigh.
While the wounds of the first two men were severe enough to get them hospitalized, the 16-year-old walked away with only minor injuries.
All three incidents occurred near a jetty in a spot known to have a lot of shark activity.


Our Travel Briefing appears each weekday morning, Monday to Friday. Catch up on past installments by clicking here. For more updates, as well as vacation photos and travel tips, follow us on Facebook and Twitter.
News