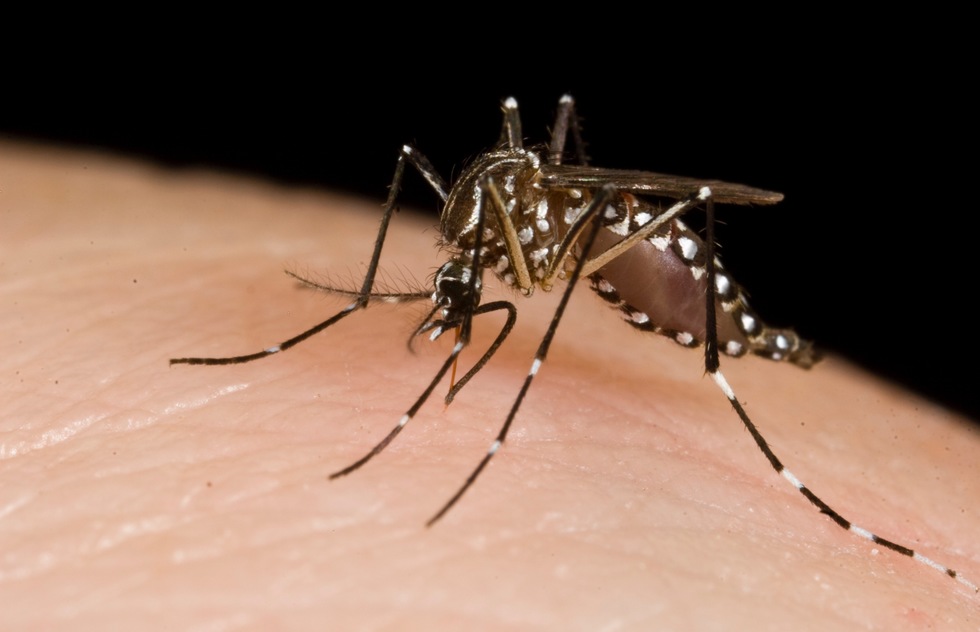 It's Wednesday—meaning you're halfway to the long holiday weekend. Here's what's happening today in the world of travel.

* ORLANDO THEME PARKS DISPENSING FREE INSECT REPELLENT TO EASE ZIKA FEARS (Associated Press). Visitors to Orlando's major theme parks are now being offered free insect repellent as fears of the mosquito-borne Zika virus continue to grow in Florida.
You can get complimentary mosquito spray and lotion at Walt Disney World, Universal Orlando Resort, and SeaWorld Orlando as of this week—even though no cases of mosquito-transmitted Zika have been reported in Central Florida and even though bugs are few and far between at those parks due to extensive spraying.
Park officials say they're offering the repellent as a balm (both literal and figurative) to anxious visitors.
Cases of the virus have been reported in South Florida as well as in the Tampa area. Though Zika causes mild symptoms in most people, it can lead to serious brain issues in fetuses carried by pregnant women who contract the disease.

* QATAR AIRPORT TO CHARGE DEPARTURE TAX TO ALL PASSENGERS (USA Today). Starting on December 1, if you happen to pass through Hamad International Airport near Qatar's capital city of Doha, you're going to be charged a "departure tax" of about $10 (35 Qatari riyals), even if you're only there to catch a connecting flight.
The change—which applies to every single passenger flying out of the airport—is designed to boost revenue in the Persian Gulf country following a recent drop in the price of oil that has hurt its economy.
A similar measure was adopted earlier this year at Dubai International Airport in the United Arab Emirates, where passengers on international flights have to pay a departure tax of 35 dirhams (US$9.50).

* TRAVEL SITE USER GETS 47-YEAR LAYOVER AND HILARIOUS CUSTOMER-SERVICE RESPONSE (Huffington Post). We know it's only Wednesday, but you can stop looking for the Customer Service Rep of the Week. It's Jen from Skyscanner.
The company, an airline search engine that compares flights to help you find bargains, received a post on its Facebook page from user James Lloyd, whose Skyscanner search had suggested a more than 400,000-hour layover in Bangkok during a trip from New Zealand to London.
"Hi Skyscanner," Lloyd wrote. "Just wondering what you’d recommend I do during the 47-year layover your website has suggested?"
The response came from Jen, the company's social media manager for the UK and Ireland:
"Unless you're a huge fan of The Terminal, I'd probably recommend spending those years outside of the airport, so here are a few suggestions."
She then listed some things you could do with 47 years in Thailand, including "become a Tai Chi expert" and explore a floating market. 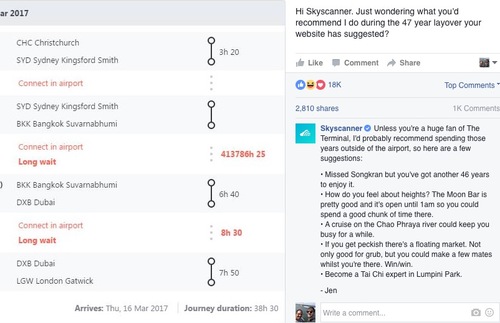 She also promised to look into the mistake and help fix it.
Meanwhile, Jen's playful response was a hit on social media, garnering, as of this writing, nearly 3,000 shares and 18,000 likes.