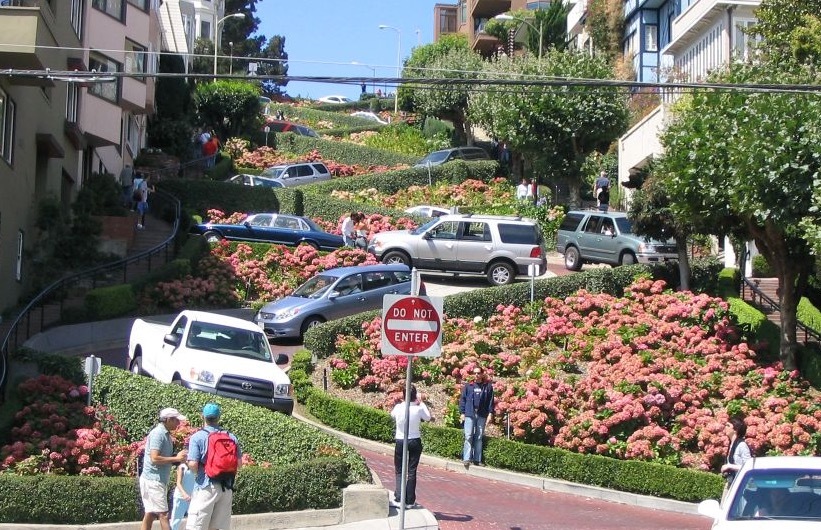 Good morning, everybody! Here's the latest from the world's cities and thoroughfares.

A San Francisco city supervisor has proposed a toll for cars traveling on the city's famously crooked Lombard Street in order to ease the 600-foot thoroughfare's overwhelming congestion.

About two million tourists visit the hilly zigzag each year, and the traffic can be maddening for residents, especially during the summer, when as many as 17,000 drivers and pedestrians come to Lombard Street each weekend.

Supervisor Mark Farrell, whose district includes the street, thinks the city should adopt a plan similar to one envisioned by the San Francisco County Transportation Authority. Drivers would have to make reservations to travel Lombard Street ahead of time, and then an electronic system would collect tolls. Driving on the street without a reservation would cost more, and residents who live there would be exempt.

Before the toll could become law, it would have to pass muster with California state legislators and Governor Jerry Brown. According to the transportation authority, it would likely be the first street toll ever assessed by a U.S. city.

Your mental picture of a dog in a car likely involves a canine head sticking out of a passenger window—jowls flapping, tongue lolling, and drool flying.

But in the event of a sudden stop or auto accident, an unrestrained pet is in as much danger as a human rider not wearing a seat belt.

One solution is to keep the animal in a travel crate. But members of the four-legged community are liable to find that setup a drag, especially on long road trips.

That's why pet-gear makers Ruffwear have come up with a sturdy new harness that goes onto your dog then clicks into any seat belt via one secure loop in the back.

The crash-tested harness is heavily padded to keep dogs comfortable, has strong metal hardware for safety's sake, and can be adjusted with straps to fit dogs from 13 to 42 inches in girth.

Once loaded in, dogs can sit or lie down while wearing the harness, remaining securely buckled in the whole time. The Ruffwear Load Up Harness comes in five sizes and costs $79.95.

The video below shows you how to put it on your dog and into your car.

A novel activity will soon be on offer for English-speaking tourists in Japan: They can take a martial arts class led by local police officers.

Starting in March, hourlong beginner-level classes will take place in the city of Matsue, Shimane Prefecture, and will be taught by members of the police force who have black belts in judo and kendo, which involves bamboo swords. After class, you can stick around to watch the sunset over nearby Lake Shinji.

The goals of the program are to improve Matsue's tourism numbers, foster good relations between the police and the public, and help the officers work on their English.

According to the city's website, class attendees can borrow all the necessary equipment from the police station, but they'll have to show proof of accident insurance in case of injury.