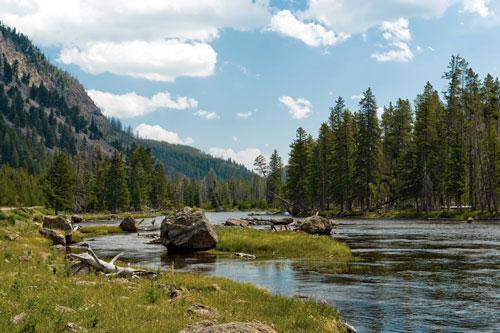 You only have to get through one more day before the long weekend! Here's what's happening in the world of travel.

* CLOSED DUE TO FIRES, YELLOWSTONE'S SOUTH ENTRANCE REOPENS (Associated Press). Several lightning-caused wildfires continue to burn in Yellowstone and Grand Teton National Parks this week.
The biggest blaze has damaged 55 square miles of protected terrain since it started on August 8. Another forced the closure of the south entrance to Yellowstone, requiring visitors coming from Jackson, Wyoming, to take an hourlong detour by car to reach the park's western entrance.
On Tuesday, Yellowstone's south gate was reopened, even as firefighters continue to battle five separate blazes in the area. Fortunately, officials say that altogether the fires are affecting less than 2% of Yellowstone's land, and all major roads, entrances, and tourist attractions are currently open.
Though firefighters seem to have the situation under control, the fires in both parks are expected to stay active over the next few days as a result of dry, warm weather.
advertisement

* LOW FARES TO HAVANA NOW ON SALE FROM SPIRIT. Fast on the heels of JetBlue operating the first flight in more than 50 years from the United States to Cuba, Spirit Airlines has begun offering, as of yesterday, its ultra-low fares for its own upcoming service to the Caribbean island nation.
One of 10 U.S. airlines granted permission from the Department of Transportation to fly to Cuba, Spirit will be connecting Fort Lauderdale and Havana starting on December 1 (JetBlue's service that started this week goes from Fort Lauderdale to the central Cuban city of Santa Clara).
With Spirit's "Bare Fare," a round-trip flight from Florida to Havana is currently going for less than $200 at Spirit's website.
Keep in mind, though, that rate only covers you and one personal item. As with most budget airlines, Spirit charges fees for everything—and we mean everything—else.
advertisement

To check out the new indoor behemoth, watch the promotional video below.

We'll be off on Monday, September 5, for Labor Day in the United States. Our Travel Briefing, which usually appears each weekday morning, will return on Tuesday. In the meantime, you can catch up on past Briefings by clicking here. For more updates, as well as vacation photos and travel tips, follow us on Facebook and Twitter.
News