Thank you for subscribing!
Got it! Thank you!
Home›Trip Ideas›Arts and Culture›Here's Where They Filmed James Bond's "No Time to Die" 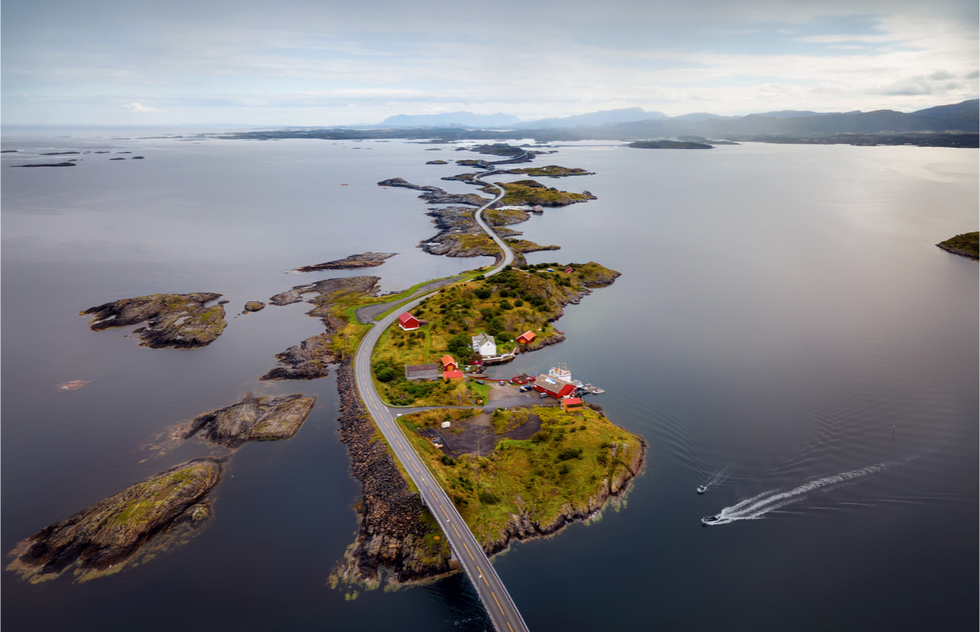 Here's Where They Filmed James Bond's "No Time to Die"

If you've got the Aston Martin and the tuxedo, we've got the list of filming locations of the 2021 James Bond movie so you can retrace the secret agent's movements.

The planet is gradually turning into a place only a Bond villain could love, but there's one thing we can still rely on: Few movies can serve up a visual smorgasbord of world-class destinations quite like a 007 flick can.

Daniel Craig's fifth and final go-round as James Bond, No Time to Die, was pulled from its scheduled release in early 2020 and got shelved while the worst of the pandemic raged. But like our appetite for travel, Bond is back and fiercer than ever. The 25th installment in the franchise has our passports hungry for new stamps once again.

Going by the trailer (above) and by published reports, here's where the new James Bond movie filmed scenes.

We will not spill any plot details in this list—Bond fans will only be spoiled for choice of great vacation destination ideas.

The government of Norway reportedly subsidized production costs of $5.4 million to get No Time to Die to film there. We'd have chosen these spots for free: Judging by the trailer, Langvann, a lake near the village of Nittedal north of Oslo, appears to be the locale for some chilling ice swimming.

Bond's trusty Aston Martin is said to test the 5-mile Atlantic Ocean Road (or Atlanterhavsveien; pictured at the top of this page), which nimbly skips across needle-thin Nordic islands through a stomach-juggling series of undulating bridges and causeways. If any road ever seemed custom-designed for a good, hair-raising Bond chase scene, it's this one. 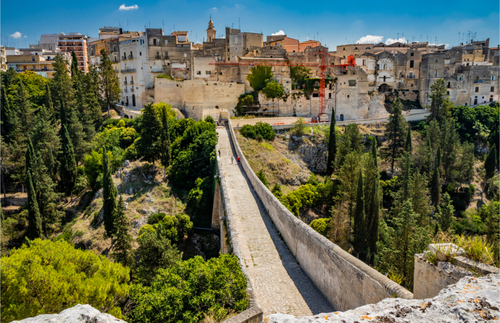 As seen in the preview, Bond leaps off Ponte Acquedotto, a two-tiered Roman bridge below Gravina, a town in Puglia in southern Italy.

Don't blink, because it appears that shots of the bridge are intercut with other shots from elsewhere in southern Italy. There's some dramatic vehicular action in the ancient white-stone settlement of Matera (pictured below), which is famous for hundreds of cave dwellings cut into its rocks and is a UNESCO World Heritage Site—so all those bullets flying in the trailer better not be real. 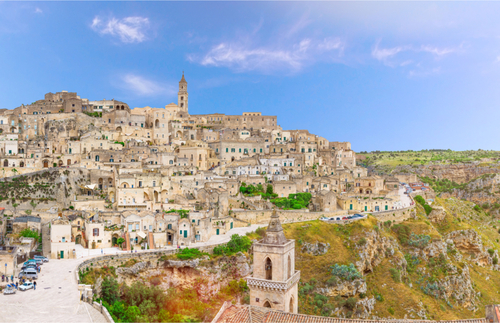 The movie reportedly shot for two days around the Canale di Mezzanotte ("Midnight Canal"; pictured below) cave near Sapri in the Basilicata region on the southwest coast. 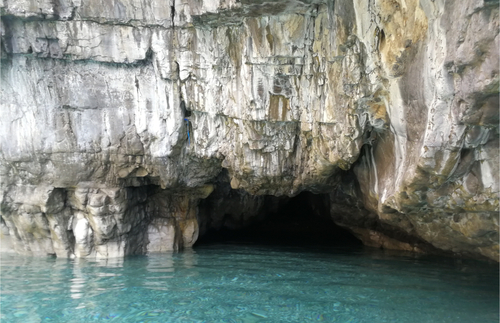 You'll also see the Arco Magno ("Big Arch") natural rock formation (pictured below) of San Nicola Arcella, a town in Calabria south of Sapri and Maratea. The film shot here, too, and as you can see, the site would be a natural match for anything shot nearby at Canale di Mezzanotte. 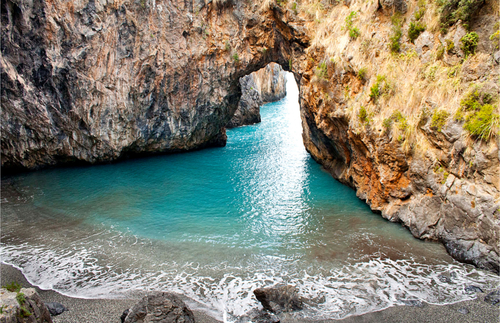 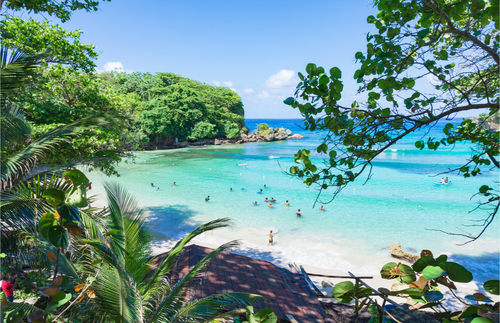 Bond attempts a short-lived retirement on this Caribbean island. Filming was in Port Antonio on the northeast coast; pictured above is Winnifred Beach, a popular spot just east of there. 007's creator, Ian Fleming, had a real-life private estate, GoldenEye, that was about 50 miles west of here—it's now a luxury resort. 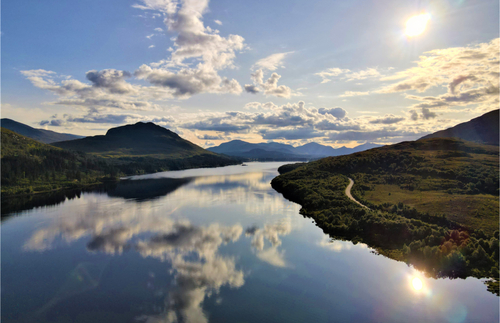 In July 2019, the No Time to Die film crew reportedly spent about three weeks shooting in the Highlands near Newtonmore at Ardverikie Estate (also seen in the TV series Monarch of the Glen) as well as in the Cairngorms National Park and in the village of Aviemore. The trailer shows a vehicle flipping over as it races along the shore of a loch in the Cairngorms; some reports name that lake as Loch Laggan (pictured above).

(Catfish alert: In the UK-produced 007 series, sometimes the Scottish terrain doubles for other countries—in 1963's From Russia with Love, Loch Craignish in Argyll stood in for Turkey, sparing the production the difficulty of long-distance travel.) 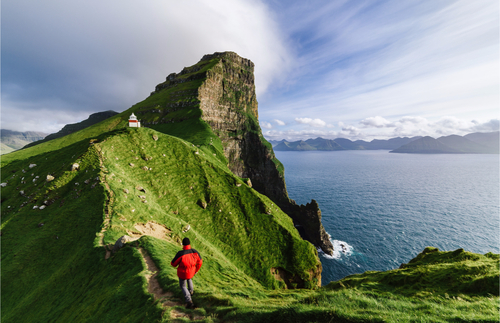 Farther north from Scotland, Bond finds himself in the Faroe Islands, a self-governing part of Denmark.

Distinguished by a swooping landscape ideal for big-screen grandeur but lousy for bocce ball, the island of Kalsoy is called "the Flute" by locals, after its long, thin shape and many tunnels. Not that there are many residents available to call it that; there are just four villages with a combined population under 150. Reports say a No Time to Die technical team spent time capturing moving images of the island.

Kallur Lighthouse (pictured above) is one of the few manmade structures on Kalsoy.

Bond and the new M, now portrayed by Ralph Fiennes, filmed a meeting in front of the 1887 Hammersmith Bridge, which is so old it can't handle heavy traffic anymore (it closed to vehicles in April 2019) but never fails to carry whatever movie or TV scene it happens to be in. And it's been in a lot, despite its relative distance from the heart of the city.

Bond also tends to dart around the Whitehall neighborhood of London, where the government institutions are—if you can read the time on Big Ben's clock tower, you're in the right area.

The headquarters of MI6 is upriver a bit on the Thames at the foot of the Vauxhall Bridge. This is one building that isn't acting—it really is the seat of the Secret Intelligence Service, or SIS. No, it wasn't really blown up in Skyfall; that was a small-scale model built at Pinewood Studios (about 18 miles west of London), where the interior scenes for James Bond films are usually shot. Pinewood is one of the most important film facilities in the world (home of the Star Wars series, many Marvel movies, and lots more), but alas, like MI6, it's not open to tourists.