Thank you for subscribing!
Got it! Thank you!
Home›Trip Ideas›Arts and Culture›Men in Kilts: Find The Locations of Sam Heughan and Graham McTavish's Scotland Series 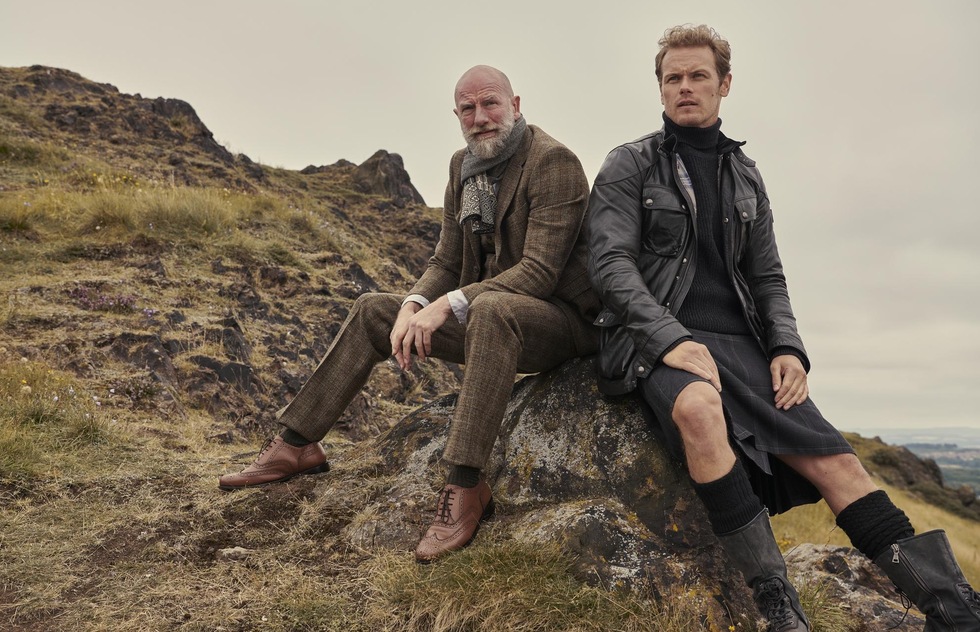 Where do Sam Heughan and Graham McTavish go on their Starz travel series "Men in Kilts"? We're keeping track and listing the stops right here.

Last year, Outlander actors and real-life buddies Sam Heughan and Graham McTavish announced their intention to launch a new podcast about their Scottish heritage. But it's hard to compress the scope of Scotland into downloadable audio—and if we're being honest, Heughan doesn't really have a face that's suited to podcasts.

So that original idea rapidly evolved, morphing into a bestselling book, Clanlands: Whisky, Warfare, and a Scottish Adventure Like No Other. Now the affable duo is starring in an eight-episode travel series on Starz called Men in Kilts: A Roadtrip with Sam and Graham.

Like pages in a tourist brochure, each episode showcases a different aspect of Scottish culture—the first episode is about food, the second about sports, and so on.

The concept distills the vacation appeal of the nation as neatly as a Scotch blend, and the execution is so ideally presented that I had to check the credits to make sure it wasn't paid for by VisitScotland, the official tourism booster. (It wasn't, but VisitScotland does have a directory of filming locations for Heughan's show Outlander.)

In Sam Heughan's case, that wouldn't be much of a hardship—Parade calls him "a feast for the female gaze." But Scotland competes as eye candy and retains co-star status.

There's something about Scots that makes them generous travelers for small screen adventures. Heughan's countryman Ewan McGregor, together with his own actor buddy, Englishman Charley Boorman, made three exotic and occasionally harrowing Long Way motorcycling series that rank among the best celebrity travel television programs ever made.

But where the Long Way buddy road trips were about spontaneous discoveries and occasional mortal danger, Men in Kilts has the smiley, pre-planned charm of a morning TV show. These actors make Scotland—already a mainstay on vacation wish lists—feel as warm as a hearth and all the more approachable.

Outlander, a time-twisting romantic adventure and, not coincidentally, another Starz property, comes along for the ride, almost like a third wheel. Just when we think we're about to receive some insight about Heughan's famously guarded private life, we're served instead clips featuring his Outlander character, Jamie Fraser.

Graham asks Sam: Does he like to drink? With a sassy twinkle in his eye, he says no, but then we're launched into a series of scenes showing Jamie getting drunk.

Graham asks Sam: Is he good at sports? He won't tell—but here's a montage of Jamie winning a game on his show.

Men in Kilts might play peekaboo with the real Sam Heughan, but it doesn't allow Scotland to become a cipher as well. Instead, the show serves as a colorful primer on the country. It succeeds in clarifying and humanizing its national stereotypes by first indulging them and then peering past them.

Heughan and McTavish traverse Scotland in a camera-equipped camper van (their driving assistant and crew aren't seen). But don't try repeating the sequence of their adventures, because thanks to editing, they frequently flit over mountains and water in a matter of seconds, leaping from one end of the country to the other in pursuit of the week's theme.

On a real trip, you must contend with things like winding roads and ferry schedules. But Men in Kilts is a valentine, not an instruction manual.

Between far-flung pit stops, we're treated to some sumptuous drone shots of the terrain, from ambling quays on the isle of Islay to rolling Highland glens.

Heughan and McTavish haven't put out an accompanying travel guide to the show—considering their popularity, that's surely coming, with plenty of pictures.

But at the very least, we can tell you the locations of the lads' stops. In many cases, tourists are welcome, so you can visit for yourself.

Where producers have chosen not to identify the location, we honor that. Here are the full locations of Season One of Men in Kilts:

Episode One: Food and Drink

Isle of Lewis: surfing and skinny-dipping

Isle of Lewis: Callanish Stones (open to the public)

Isle of Skye: crofting (farming) with sheep and sheepdogs

Isle of Skye: cycling on The Quiraing (Trotternish), the Old Man of Storr pinnacle formation, swimming in the Fairy Pools (near Glenbrittle), abseiling at Kilt Rock with Skye Highland Adventures

Isle of Skye: Trumpan Church ruin on the Waternish Peninsula

Plan your own Scottish adventures with Frommer's Scotland, available now in both paperback and e-book editions.