Thank you for subscribing!
Got it! Thank you!
Home›Trip Ideas›Arts and Culture›New Jersey Filming Locations from "The Sopranos": A Driving Tour 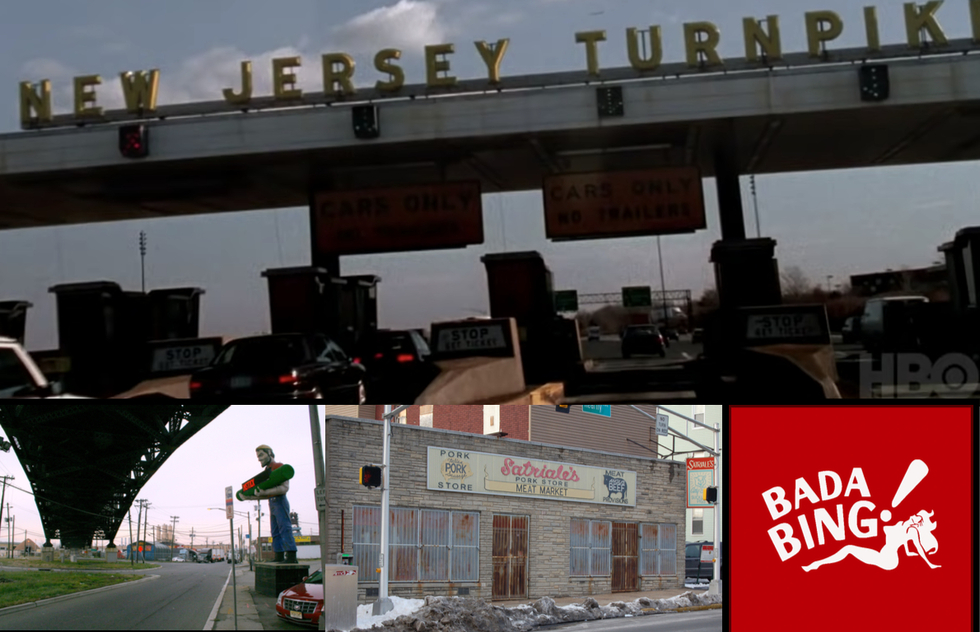 New Jersey Filming Locations from "The Sopranos": A Driving Tour

Fans of the iconic HBO series can visit these real-life North Jersey haunts of Tony Soprano and crew.

One measure of the show's GOATness: A new generation has discovered the series and has found, as chronicled by the New York Times, newfound cultural and political relevance in the travails of mafia boss Tony Soprano (James Gandolfini), his family, and his other family—the fictional DiMeo criminal organization.

It's hard to think of another TV show from the class of '99 that has had anywhere near the same kind of impact, with the possible exception of SpongeBob SquarePants.

Whether you've recently begun streaming The Sopranos on HBO Max or you watched the original run ending (and boy, what an ending) in 2007, you might be interested to know that many of the North Jersey locations that appeared onscreen can still be visited in real life (most interior scenes were shot at Silvercup Studios in New York City's Queens borough—sorry, that facility is not open for tours).

The Sopranos Location Guide online lists more than 500 spots in New Jersey, New York, and elsewhere that were featured on the show; go to that site if you need an exhaustive list.

Otherwise, hop in the car and follow along on this driving tour of iconic filming locations from The Sopranos in North Jersey. A map of the destinations featured is embedded at the bottom of this post. Warning: mild spoilers ahead.

Here's a Spotify playlist for the ride, compiled by HBO. Yes, of course it starts with Alabama 3's "Woke Up This Morning."

If you really want to set the right mood, redo Tony's drive from Manhattan to his house via the New Jersey Turnpike in the show's opening credits.

The Sopranos Location Guide has detailed driving directions starting from the Lincoln Tunnel in New York, with screenshots of crucial sights to watch out for, such as the carpet-clutching Paul Bunyanesque statue in Jersey City (at Wilson Carpet & Furniture, 220 Broadway) and the Pizza Land restaurant in North Arlington (260 Belleville Turnpike).

You'll wind up at the Soprano family's house, 14 Aspen Drive in North Caldwell. 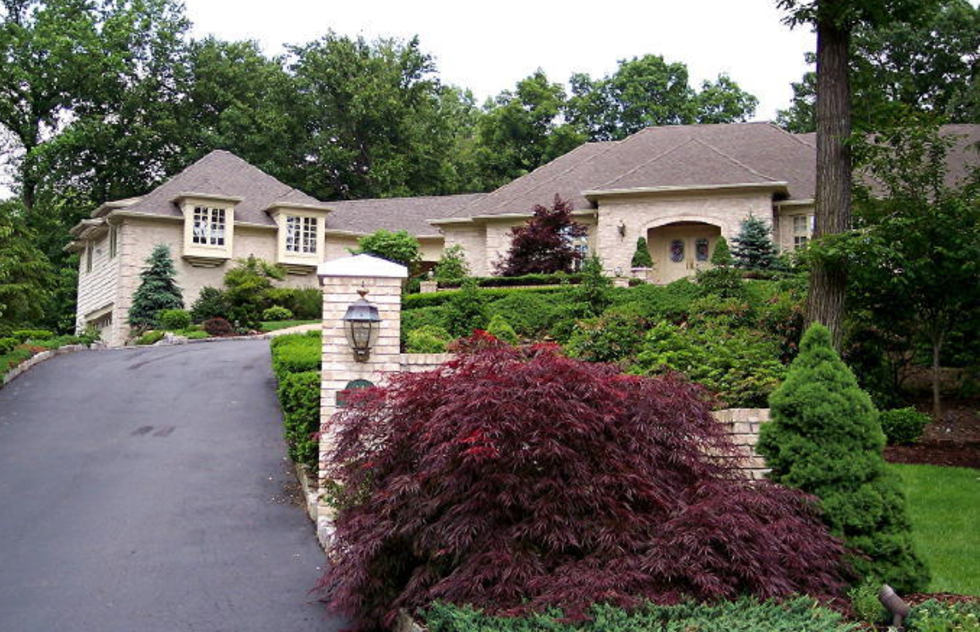 The front of the 5,600-square-foot home used as the residence for Tony, wife Carmella (Edie Falco), and their kids Meadow (Jamie-Lynn Sigler) and A.J. (Robert Iler) can easily be spotted from the road. There really is a pool out back, too; we can't confirm the presence of ducks. Although indoor scenes were filmed on a set, the design was a meticulous re-creation of the home's real-life interiors, which do appear in the pilot episode.

Because the place is privately owned, you can't go inside and poke around—unless, of course, you buy the house, which went on the market in 2019 for $3.4 million. (So far, no takers.)

Since this is a private neighborhood, be respectful when visiting—though current owners Patti and Victor Recchia are pretty good sports.

Describing photo-seeking tourists for the New York Times, Victor said, “They’ll pull up in like a limo or something, get out in a robe, and pick up a newspaper."

About a 15-minute drive southwest to Bloomfield will take you from the show's opening credits to its unforgettable final moments. 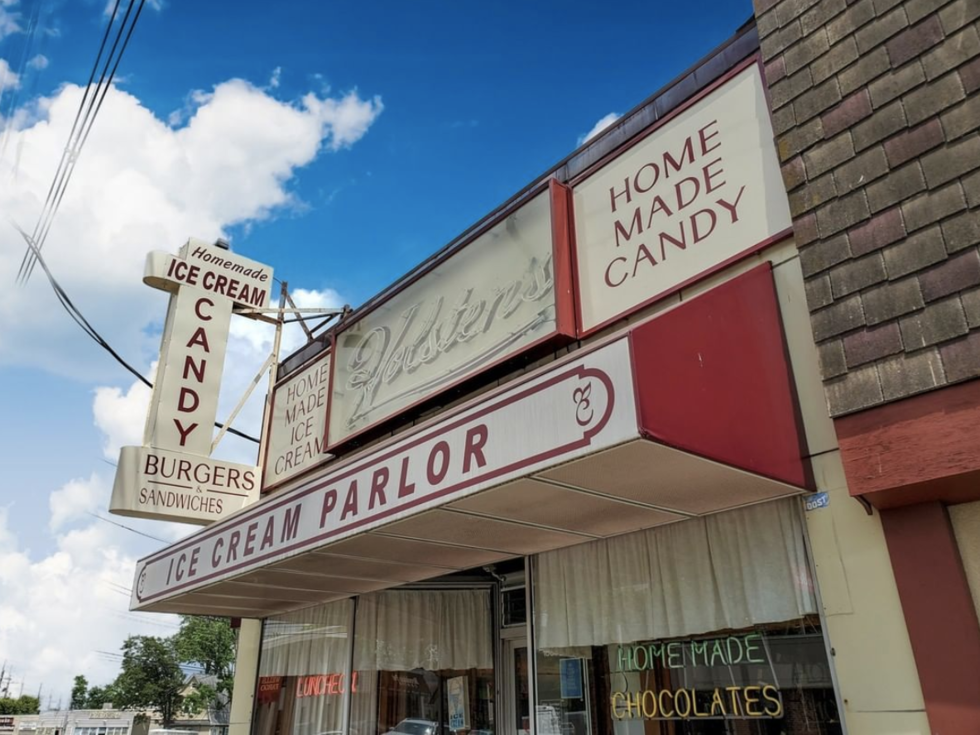 Opened in 1939, Holsten's (1063 Broad St.) is an old-fashioned ice cream parlor that served as setting for the last scene of the series, in which the Soprano family munches onion rings before an abrupt cut to black that made us all think our TVs had gone on the fritz. The establishment also appears in the prequel film, The Many Saints of Newark.

You can sit in Tony's booth, but please spare the waitstaff another rendition of "Don't Stop Believin'."

From Bloomfield, take the Garden State Parkway northeast to meet Route 17, then go south to where that road meets Interstate 80 near Lodi to find Satin Dolls (230 Route 17 South), the strip club that stood in for the Bada Bing! on The Sopranos.

DiMeo associates are frequently depicted conducting business at the club throughout the show, usually with topless extras gratuitously writhing in the background. Interior scenes were actually filmed here rather than on a set, but if you'd prefer to keep the mature content on your TV and not in your real life, you can settle for a photo of the Bada Bing! sign out in the parking lot. 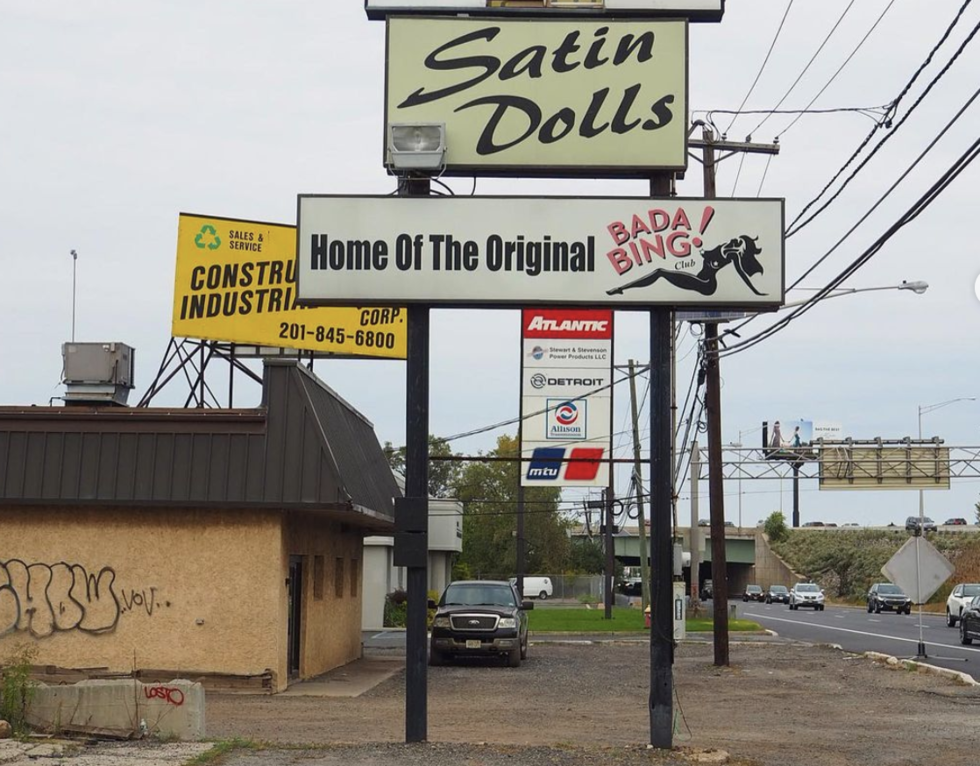 Satin Dolls is about a half-hour drive north of the eastern Newark suburbs (via I-95). A vacant storefront in one of them, Kearny, was turned by HBO into the set for Satriale's Pork Store (101 Kearny Ave.), another frequent spot for Tony and company's deal- and threat-making as well as "gabagool" consumption. The set was later demolished and turned into a parking lot. 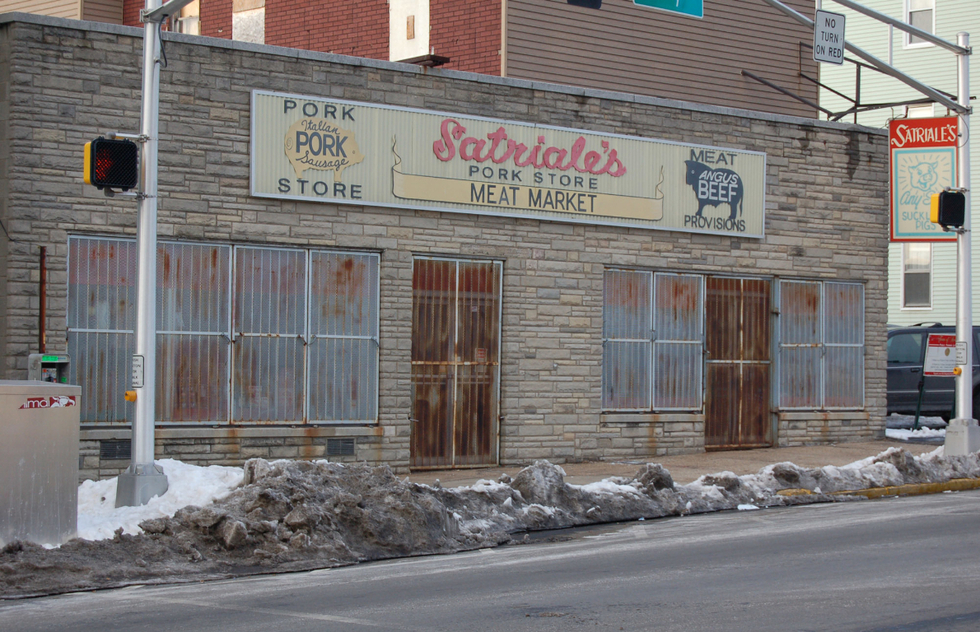 For The Many Saints of Newark, an earlier version of Satriale's was imagined using a building on Market Street in nearby Paterson.

To visit a Sopranos-related butcher shop that's actually open, head to Centanni's Meat Market, located at 815 2nd Ave. in Elizabeth, about a 30-minute drive south of Kearny via I-95. Centanni's appears in the pilot of The Sopranos in the role that Satriale's would take over for the rest of the run.

To extend your tour into South Jersey, continue on I-95 to reach the Pine Barrens, the ostensible setting for everybody's favorite episode of The Sopranos, a season three outing in which Tony's protégé, Christopher Moltisanti (Michael Imperioli), and henchman Paulie Walnuts (Tony Sirico) get hopelessly lost in snowy woods while trying to handle a Russian mobster. 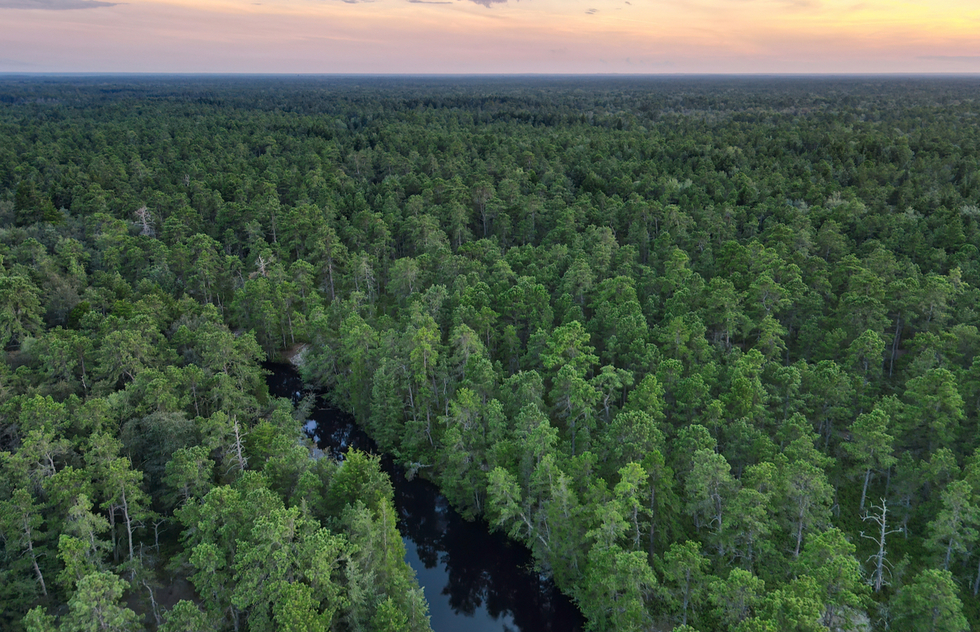 As the New York Post points out, the episode was actually shot more than a hundred miles to the north of the Pine Barrens, in New York's Harriman State Park.

But we figure you could use some woodsy scenery in Jersey after all that time on the highway, and the 1.1 million acres of forest in the Pine Barrens certainly fit the bill. Don't worry—hiking trails are well marked.