Thank you for subscribing!
Got it! Thank you!
Home›Trip Ideas›Local Experiences›Beyond The Aurora: The Surprises of Fun and Funky Fairbanks, Alaska 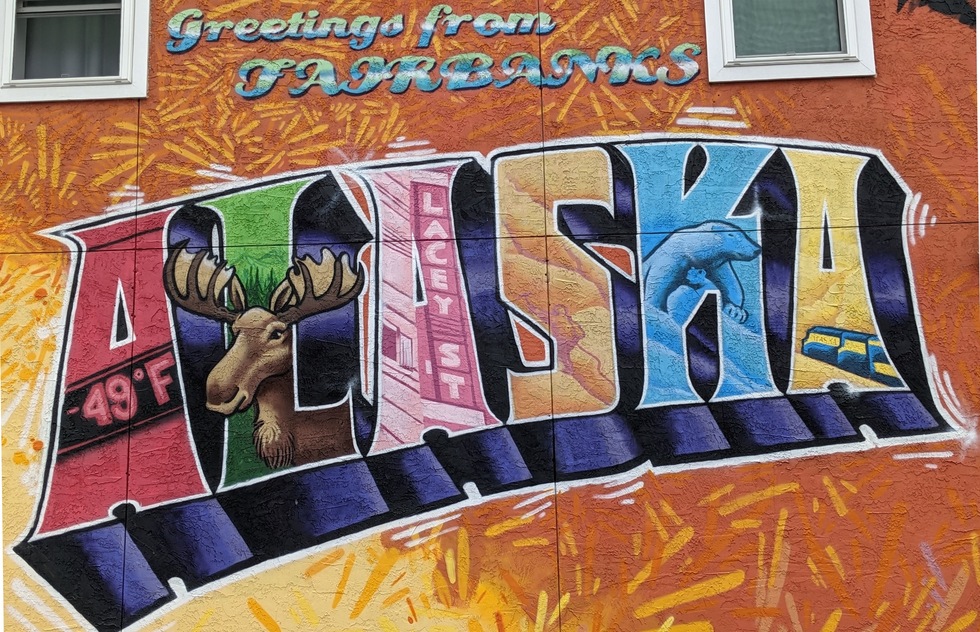 Beyond The Aurora: The Surprises of Fun and Funky Fairbanks, Alaska

Too many people speed through Fairbanks, Alaska. But there's much to reward travelers who spend a little time here.

At 65 degrees north in latitude and blessed—or cursed, depending on whom you talk to—with long, dark winters, Fairbanks is located at Alaska’s sweetest spot for winter viewing of the Aurora Borealis, or Northern Lights. But during the lengthy summers, when the sun barely sets, the city bursts with flowers, art events, and midnight baseball games. Even amateur green thumbs can grow comic-sized vegetables here in season.

Unexpectedly enjoyable museums, a friendly and diverse population, and one of America’s most impressive selections of Thai restaurants—there’s a lot here worth seeing besides the city bus made infamous by the book and film Into The Wild. So let’s take some time in Fairbanks, Alaska’s second-biggest city.

Not somewhere to blow through quickly, the bite-size Morris Thompson is somewhere to stop for an introduction to the Interior’s people, wildlife, and seasons. Aside from getting maps and information about cabin rentals and tours, this is home to some nifty artwork, extensive Native artifacts and context, and some lively walk-through dioramas of Alaskan life.

Wander through a re-creation of a remote cabin, see a (taxidermied) bear snuffling around a camp, look up at the plane the Episcopal “Flying Bishop” Bill Gordon once used to tend to his far-flung flock in isolated areas, or learn how the native people dried salmon meat for winter survival. Outside, don’t forget to take a selfie under the creepy, heavy metal-ish arch of 100 knotted moose and caribou antlers (pictured below). 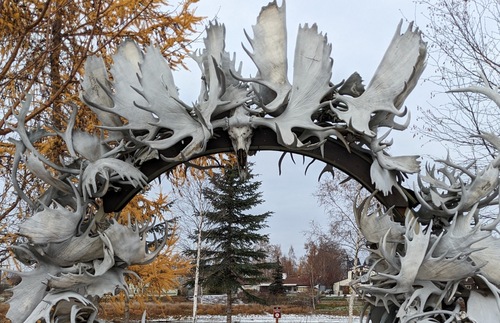 The battered Art Deco sign, glass box office, and giant projector upstairs can make this former cinema feel musty and forgotten. However, all is breathlessly forgiven in the Ice Museum when the flashing colored lights come up on the ice sculptures, which are kept at a chilly 20 degrees Fahrenheit. The ice works, mainly of Alaskan animals, are childish delight to run around, and visitors line up excitedly for the ice slide. The topper when I visited was a live display of sculpting by relentlessly cheerful artist An Zhe. Make sure to catch the homemade video tribute to the local Ice Art Championships (February–March).

Still called Alaskaland (its original name) by locals, this 44-acre, self-dubbed “Historical Theme Park” is arguably an equivalent of a frontier-style Disneyland, but without the schmaltz and rampant commercialism (its general store is pictured below). History buffs get into at the (sadly dilapidated) SS Nenana sternwheeler, which provided access to the Yukon long before roads could be built; and kids happily clamber aboard The Crooked Creek & Whiskey Island Railroad, a miniature train that runs inside the park.

Its Air Museum, inside the Gold Dome building, is a small treasure, and its Pioneer Museum is an enjoyably exhaustive and eccentric look at early Alaskan life that has been put together using donated items by long-term Alaska residents. Even walking around the cabins, many of which have a backstory and were moved here from other places to become home to artists, snack purveyors, photographers and more, is worth your time. 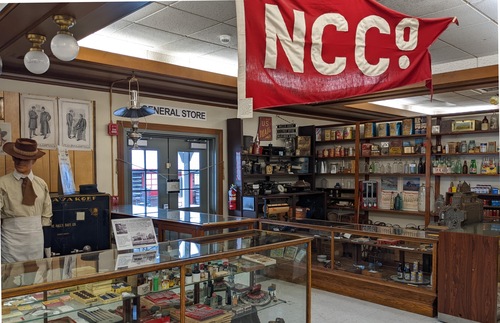 Cultivating tea? This far north? Near the famous Chena Hot Springs (60 miles outside town), Sipping Streams is growing its own Alaska-raised tea. Cleverly branded and run by the fiercely community-minded, Hong Kong-born, Fairbanks-raised Jenny Tse and her husband Brian, the store in Fairbanks is packed with loose leaf blends that rival any tony store in the Lower 48. Try its 1,000 Mile Tea, which was formulated to serve to participants of the Yukon Quest sled dog run and became an unexpected hit with mushers, truckers, gamers, and locals alike.

Despite its isolated location and small population of around 32,000, Fairbanks has an enviously diverse population that’s reflected in its many types of places ot eat. The town supports around 20 Thai restaurants, many of which trace to the first family who moved here to work on the oil pipeline back in the 1970s. Ask a local which establishments they prefer.

Car fanatics can always sniff out an auto museum. This one, despite its rather bland exterior, is a welcome surprise. The collection focuses on the years leading up to WWII and the tough, modified cars that first drove in Alaska. You’ll see Buster Keaton-style steamers, midgets, and speedsters with bug-eye lights—a loveably cartoonish look with style. Nearly all of them still run.

They gleam magnificently under the lights and are rounded off cleverly by the inclusion of dummies wearing matching vintage clothes from the period. The effect is enchanting enough to make a visitor want to walk several loops among the 70-odd vehicles. Make sure to seek out the 1917 version of a snowmobile (pictured below). 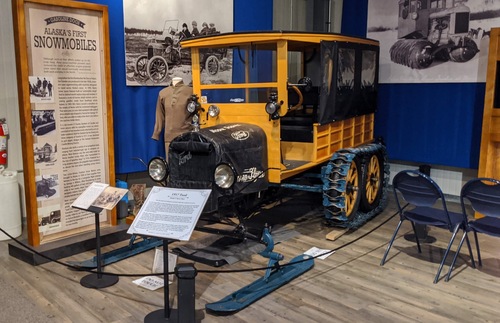 The huge satellite dish, globes, and other constructions on its roofs make the University look a bit like a hilltop villain’s lair, but in fact it contains several excellent attractions. In the winter, you can see the reindeer and musk ox of the Large Animal Research Station, or in summer stroll the expansive Botanical Gardens (and get lost in its maze). Year-round, there’s the Museum of the North.

Manageable in an hour or two, the Museum contains artifacts from a broad selection of Alaska history including dinosaur fossils; a bowhead whale skeleton; mounted animals (pictured below); a look at the Japanese occupation in Alaska during World War II; compelling displays of Native Alaska art, tools, furs and kayaks; and the 36,000-year-old Blue Babe, a mummified bison discovered in 1979. 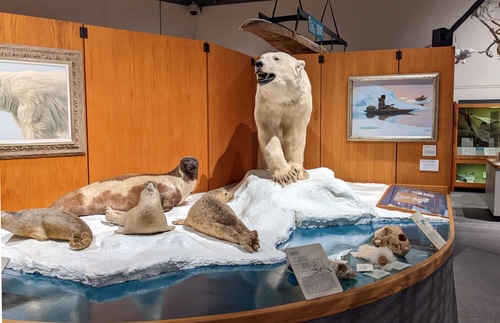 Downtown Fairbanks is easily walkable. The central part of 2nd Avenue, complete with 1950s throwback Mecca Bar, is essentially the main drag. After browsing in the jewelry and souvenir stores, go into the eclectic Co-Op Plaza. It’s packed with restaurants and art galleries, and upstairs, you’ll find the worthwhile Community Museum.

Small and heavily focused on dog-mushing and gold mining (the precious substance was discovered here by Westerners in 1902), it’s a more sober alternative to Pioneer Park. The pictures and stories of the brave men—and even braver women—who willingly came here to seek their fortunes are still jaw-droppingly unbelievable.

Like many things in Fairbanks, this organization is billed as the “most far north” of its kind. Committed to providing high-quality Shakespearean and classical theatre productions, especially for younger people, its first performance was given in 1992 alongside the Chena River in downtown. Now it holds classes and events year-round and still presents outdoor shows at the University in summer.

Fans outside Alaska can join its February Bard-A-Thon, a 24-hour-a-day, weeklong reading of the complete works of Shakespeare. People phone in from all over the globe to contribute their moment of performing the words of the Bard.

Fairbanks played a vital role of the Lend-Lease Scheme (an equipment sharing program among America aided its allies) in World War II. More than 8,000 U.S.-made aircraft were ferried here, and several hundred Russian pilots flew them across the Bering Strait for use in the Japanese, German, and Italian theaters of war. This huge statue (pictured below) is the only public memorial to the exercise. 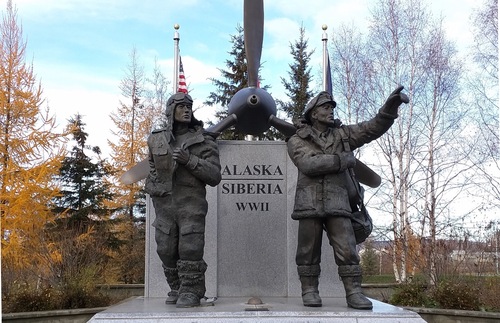 Another wartime project, the Alaska Highway (which was built to link the region to Canada and the Continental U.S. states) has also rather faded from modern memory, but its unofficial end is noted on Milepost 1523, a short walk from the memorial. In Golden Heart Plaza, you’ll pass the 18-foot-high Unknown First Family native statue, and you might even hear the carillon tunes of the nearby Clock Tower.