Thank you for subscribing!
Got it! Thank you!
Home›Trip Ideas›Family & Kids›7 Bewitching Filming Locations from "Hocus Pocus" That You Can Visit in Salem, Massachusetts 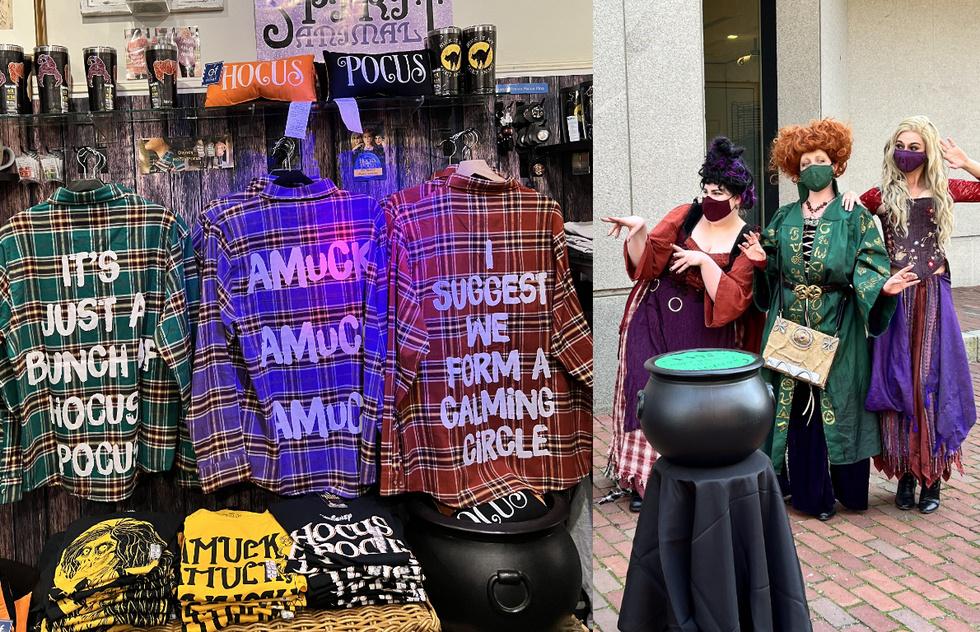 7 Bewitching Filming Locations from "Hocus Pocus" That You Can Visit in Salem, Massachusetts

Come, little children! It's all just a bunch of "Hocus Pocus" at these Salem spots that appeared in Disney's beloved Halloween movie classic.

Though it was a critical and commercial disappointment upon release in July 1993, Disney's Hocus Pocus has grown over the years into an undeniable—and, in October, inescapable—Halloween classic.

You could argue, in fact, that the movie's made-up Sanderson sisters (played by Bette Midler, Sarah Jessica Parker, and Kathy Najimy) are the best-known practitioners of witchcraft associated with Salem, Massachusetts. After all, the real-life victims of the 17th-century Salem witch trials don't fall in that category because they were falsely accused. (Sorry for that spoiler if you never finished The Crucible in 9th grade.)

In any case, Hocus Pocus doesn't have anything to do with that upsetting and upsettingly recurrent chapter in American history. Instead, the film concerns the wicked Sanderson trio coming back to life after 300 years to camp it up and feast on sacrificial virgins. Typical Disney fare.

Most scenes were shot on soundstages in Burbank, California. However, cast and crew shot some exterior footage on location in Salem, where Hocus Pocus fans (who should call themselves "Fandersons" if they don't already) can undertake an easy pilgrimage to sites featured onscreen.

The most fitting and most crowded time to visit Salem is October, when the town's monthlong "Haunted Happenings" event welcomes seekers of spooky fun with haunted houses, ghosts tours, psychic fairs, zombie parades, and enough wicked witchery to keep the Sanderson sisters' feline foe, Binx, busy through all nine of his immortal lives. (Pictured above are merchandise for sale at the Salem Witch Museum gift shop and costumed performers on Essex St.)

If Hocus Pocus has put a spell on you, hang onto your heads. Here are seven spots in Salem you're liable to find enchanting. 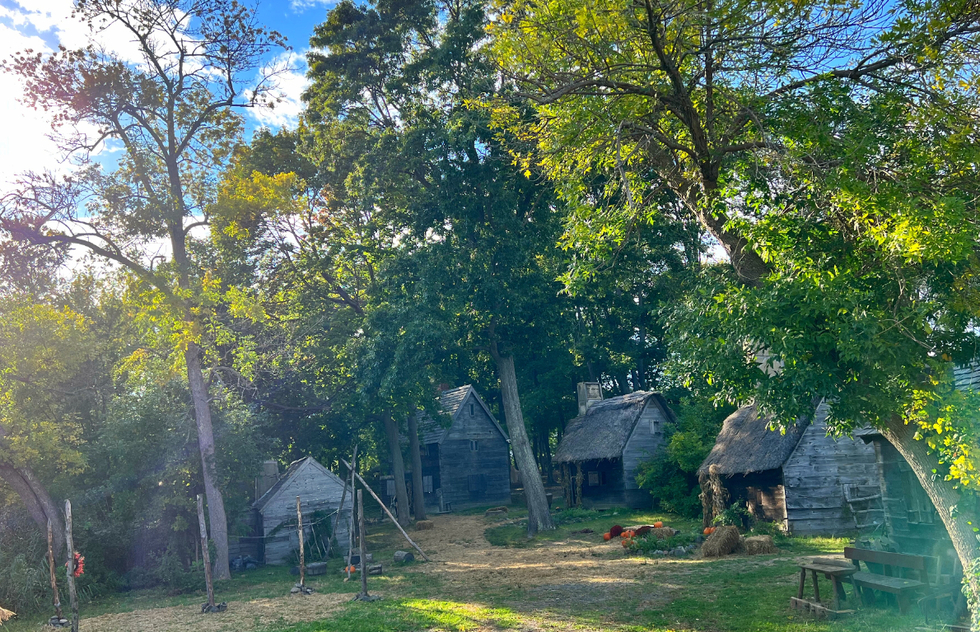 Scenes of 1693 Salem at the beginning of the movie were shot at Pioneer Village (in Forest River Park, 98 West Ave.), a living history museum meant to show visitors what life was like here in the 17th century. In addition to re-creations of wooden, thatched-roof cottages and other examples of colonial architecture, the museum, which opened in 1930 and claims to be the oldest of its kind in the United States, has a medicinal garden and blacksmith shop.

You'll look in vain for the Sandersons' cottage, with its water wheel, shelves of potions, black-flame candle, and googly-eyed spell book. That was all created on a set back in Southern California. 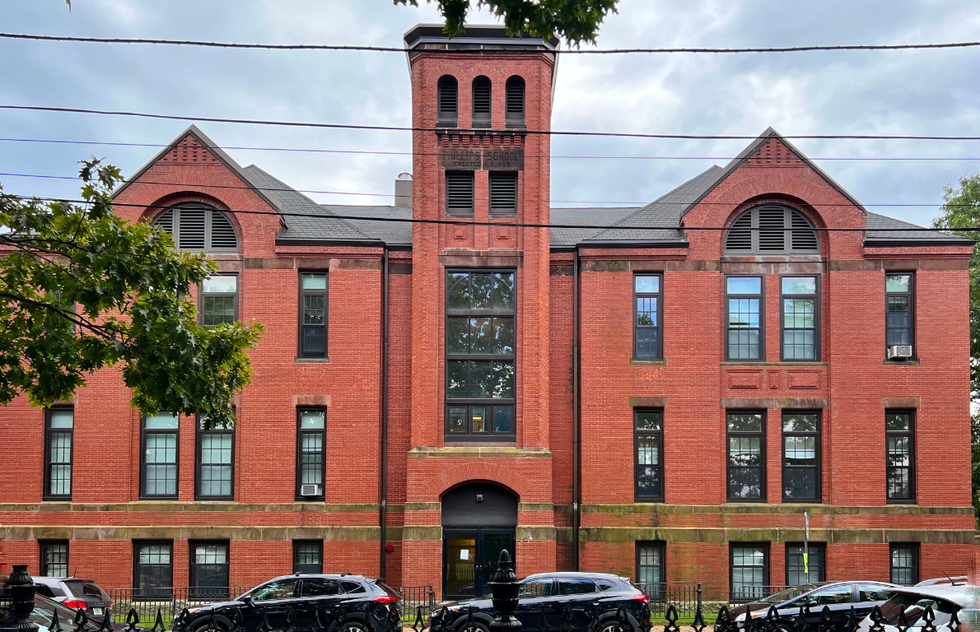 The imposing red brick edifice on the southeast corner of Salem Common was put out of service as an elementary school in 1992, just in time to play a site of ineffective witch incineration in Hocus Pocus. No, you can't go inside to check out the furnace—the building is closed to the public. 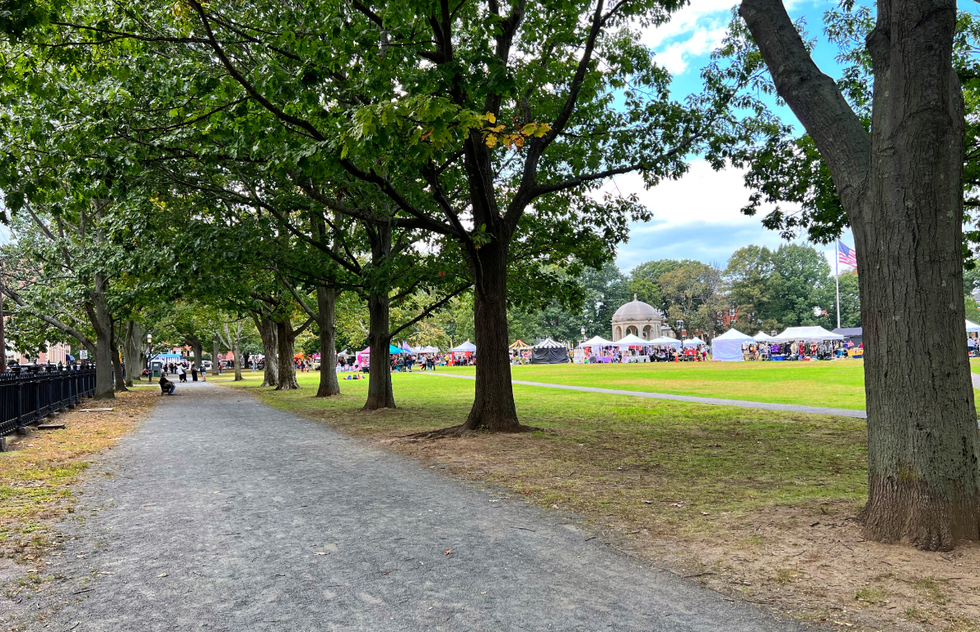 Salem's leafy village green, a bucolic spot ringed by historic houses and monuments, was the site of the first muster of the Army National Guard in 1637. Somewhat less heroically, the park is also where the Sandersons' inadvertent summoner, Max (Omri Katz), fails to get the phone number of his crush, Allison (Vinessa Shaw). 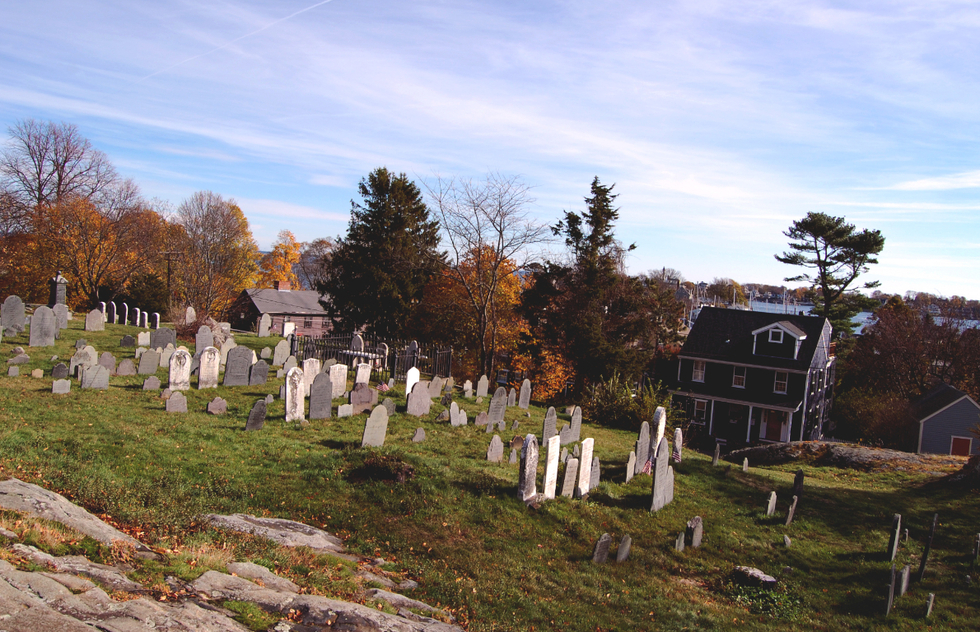 Max is new in town, so maybe that's why he ends up about 4 miles outside of Salem when he's riding his bike home from school. The hilly cemetery where he encounters his (tedious) bullies and loses his sneakers is actually in Marblehead, Salem's neighbor to the east. The oldest epitaphs date to 1638 at this picturesque graveyard, which has views of the colonial town and harbor.

The movie's nighttime cemetery scenes were shot on a set, presumably because that made it easier to accommodate a flying upright vacuum cleaner. 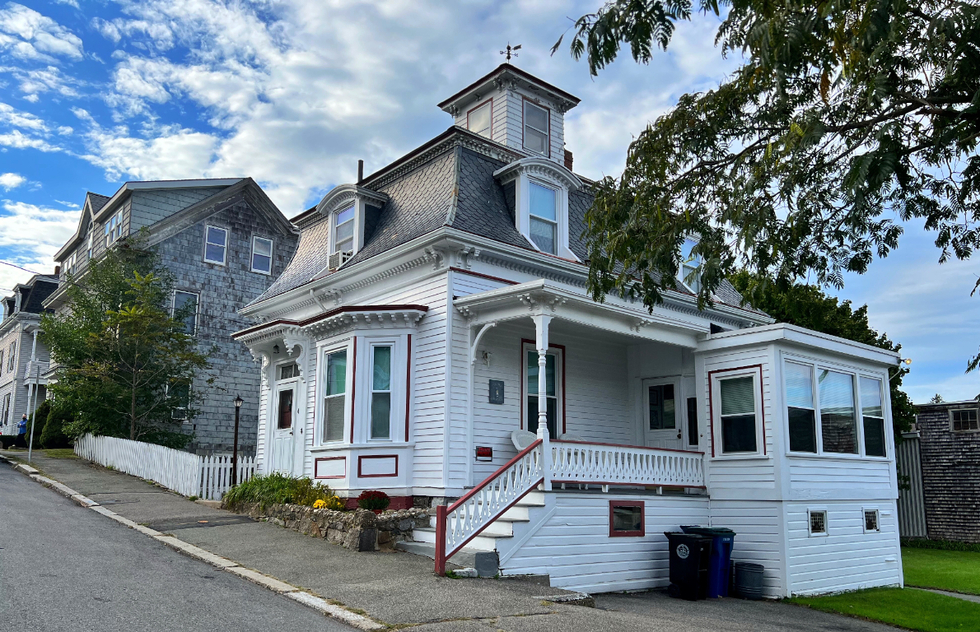 Just west of Pioneer Village, at the end of a street facing Salem Harbor, stands the white Victorian-style house inhabited onscreen by Max, precocious little sister Dani (Thora Birch), and their parents. You can't miss the place—it's the one with all the Instagrammers lined up out front. As you join the queue, keep in mind this is a private residence and noisy or destructive looky-loos deserve to have their mouths sewn shut, à la Billy Butcherson. 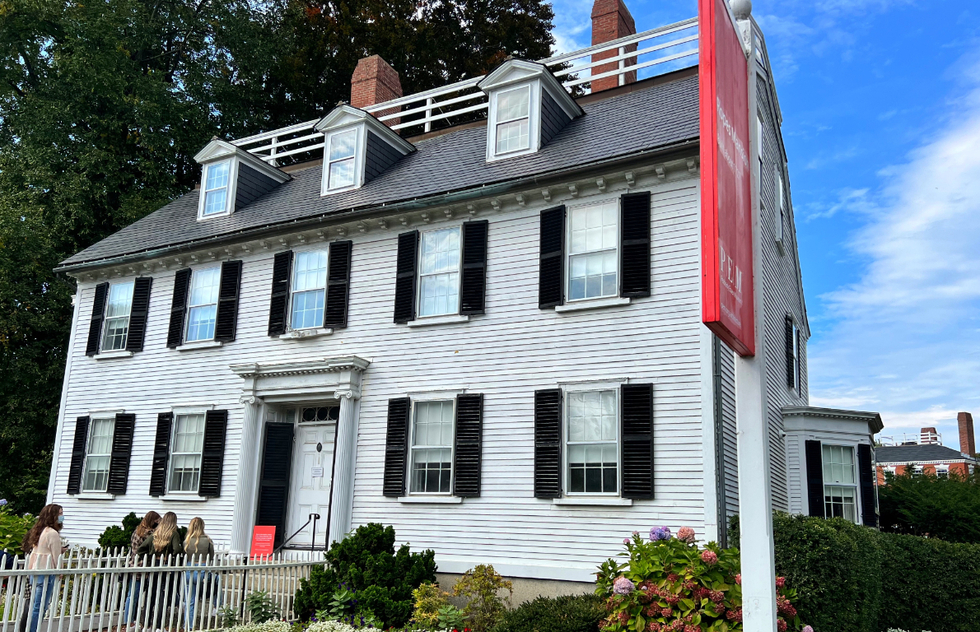 The Georgian home where Allison's family hosts a colonial costume party is, in real life, the Ropes Mansion (318 Essex St.), a circa 1720s residence now owned by the Peabody Essex Museum. You can tour the home's interior or take a quick stroll through the peaceful backyard garden. 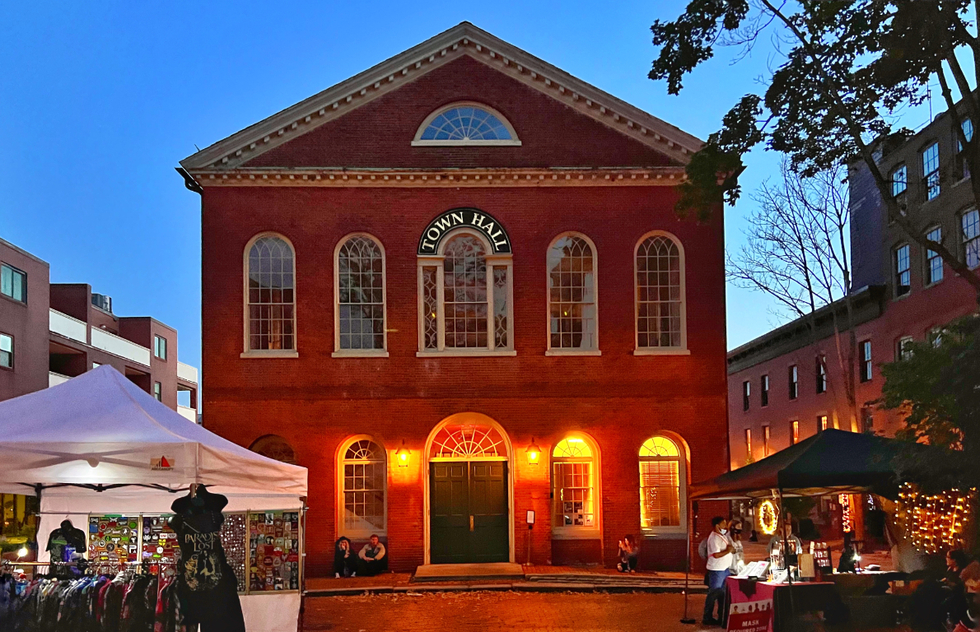 Finally, the building where the grownups in Hocus Pocus attend a costume party, only to wind up under a spell to dance till they die, is Salem's Federal-style Old Town Hall. It's no longer used for city business but hosts cultural events and the occasional wedding.

Bette Midler's rendition of "I Put a Spell on You" wasn't filmed here. The movie's most memorable moment went down in Los Angeles, in the ballroom of the Park Plaza Hotel, now known as The MacArthur.

From Boston, Salem can be reached in less than an hour via car, MBTA commuter train, ferry, or broomstick. Visit our planning page for more information.