Thank you for subscribing!
Got it! Thank you!
Home›Trip Ideas›Food and Drink›A 24-Hour Food Tour of Valencia 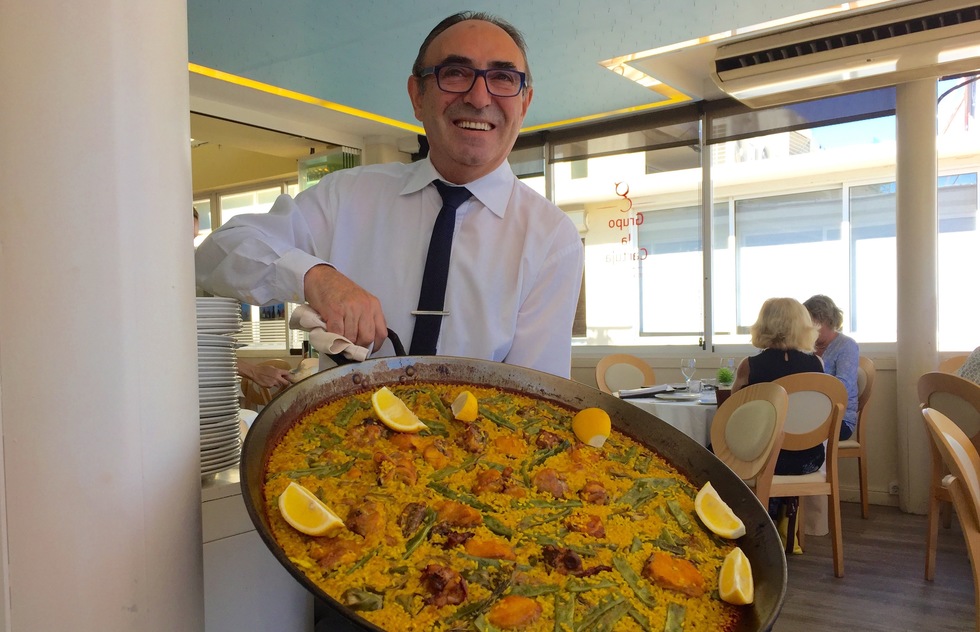 A 24-Hour Food Tour of Valencia

The hometown of paella is a gastronomic stalwart of Spain. Our writer eats his way through the city in one whirlwind day.

Ancient city gates. A gorgeous cathedral. Vibrant street life. All are fundamental to Valencia’s charms. But its authentic reputation also lies in the scope and richness of its cuisine. I arrived in Valencia, Spain, for a mere 24-hour sojourn, part of a culinary tour via Eurailpass that began in Lisbon and would end the next day in Barcelona. I decided to make the most of my brief time in this coastal city, not leaving until I had sampled the Valencia dish known above all others: paella.
A Taste of Horchata
Valencianos like to brag about their 300-plus sunny days a year, and this afternoon was no exception. After strolling through the old city, my guide, Maximo, and I stopped for a refreshment at the 200-year-old Horchatería de Santa Catalina. At the counter we ordered horchata, a traditional drink, sweet and refreshing, found throughout Spain and made from ground tiger nuts, water, and sugar. To me, the taste was similar to sweetened almond milk.
“It’s very healthy for you,” said Maximo. “Mothers like to give it to their children because of the minerals. People say Valencianos have horchata in their veins because they’re both sweet and cold.” 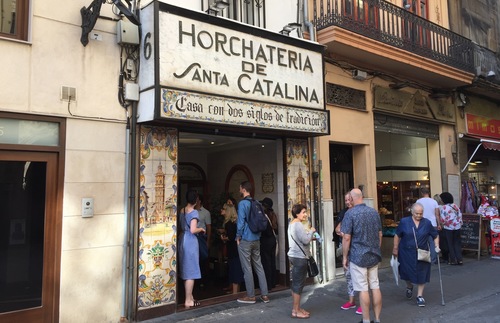 Colmado LaLola, Valencia’s Hippest New Tapas Joint
Maximo was eager to take me and some friends that evening to sample the tapas, or Spanish appetizers, at Colmado LaLola, a chic bar and provisions shop. First came three cheeses: tronchon, a blend of cow’s, goat’s, and sheep’s milk; manchego, from La Mancha, to Valencia’s west; and cabrales, a blue cheese that knows how to bite back. Next, a plate of thinly sliced anchovies, artistically surrounded by black, green, and purple olives, and the even tastier salt-cured anchovies, tart and delicious. Patatas bravas, for which Spain deserves an award, are fried potatoes topped with rich aioli. The cries of delight from my companions were just shy of embarrassing.
The man behind this venture is Jesus Ortega, a longtime Valencia restaurateur with a nonstop smile and a personality bigger than the bells in the adjacent cathedral tower. “We’ve tried to capture the feeling of the old shops from the neighborhood,” he said, “focusing on local products.” The icy cava (a Spanish prosecco) he pours is from the region. His LaLola pale ale is brewed in nearby Rio Roja. The olive oil he uses? Again, from Valencia.

“You can come here to eat, to have a drink at the bar, or to buy some ham and take it home,” says Ortega.  Elsewhere on the shelves of LaLola are caviar and wines, tomato sauce and jamón ibérico made from acorn-fed pigs. “My kitchen is Spanish,” says Ortega. “My inspiration is Valencia.”
Central Market, the City’s Breadbasket
Food stalls have operated on the site of the Mercado Central for more than 1,300 years, since the Moorish occupation. We visited there the next morning. The fruits and vegetables are what I noticed first; the colors pop from the clean, well-lighted stands. Xinxols are like small dried apples, slightly sweet, eaten raw as a snack. Valencia tomatoes are mainly green, with only hints of red, despite being fully ripe, so they’re unpopular outside the region despite being moist, chewy, and flavorful. Valencia orchards produce more than 400 million tons of oranges—every variant that is orange in color, including mandarins, tangerines, and clementines. 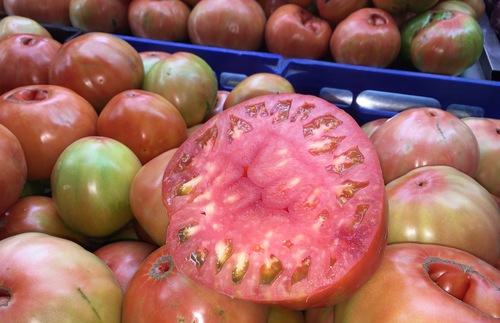 Spain’s famous dry-cured hams sell for between US$2 and $80 per pound, based on the type of pig, diet, and curing time. Serrano ham is made from pigs raised in the mountains while jamón ibérico is more expensive, cured for as much as four years, and made from a species of black-footed pig from southern Spain fed on acorns, resulting in a robust flavor. The black foot, or pata negra, is left attached when sold, as a mark of its fine quality. I asked a woman at the market how long the ham will last. “We don’t know,” she said. “We eat it so fast we’ve never found out.”
The Real Deal: Paella at La Marcelina
My goodbye lunch that afternoon was on the beach at La Marcelina, founded in 1888 and famed for its paella, a dish that was created in Valencia. We grazed over a salad of tuna, olive, carrot, and sliced radish. Then came lightly breaded appetizers of calamari, cod, and sardines. But we were impatient for the highlight to come.
Paella has its variations, though many of the ingredients are constants. For our main course we had ordered Paella Valenciana, “the real one,” said Maximo, made of chicken and rabbit, flat green beans (bajoca), white beans, artichoke, rice, rosemary, and saffron. The entire melange is then drizzled lightly with lemon.

At La Marceline, as at many paella restaurants, the dish is brought to the table still sizzling in its huge frying pan, as if to offer proof that the dish is fresh. Some diners actually applaud; I know I did. The chicken legs were small and tender, like those of Cornish game hens. The rabbit was, if anything, more delicious than the chicken, and not gamey in the least. 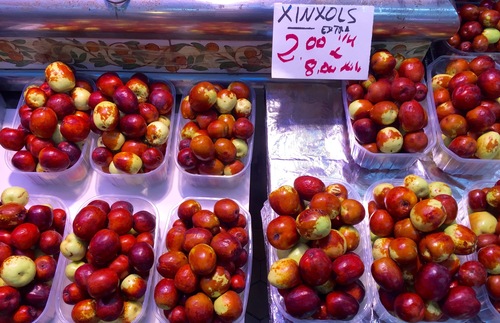 Maybe it was the jovial crowd at my table, the lively noise from the other diners, or the open doors onto the broad beach, but that paella was not just the perfect dish for the moment. It was also the only possible dish for the moment, representing all of Valencia on a single plate—the Moors, the old city gates, the mercado, the tapas tradition, the cathedral.
And what else could you have for dessert following paella but mandarin sorbet surrounded by perfect wedges of Valencia oranges on a bed of caramelized orange zest? It would have been dishonest to have anything else.