Thank you for subscribing!
Got it! Thank you!
Home›Trip Ideas›Outdoor & Adventure›Idaho White Water Rafting Where Smartphones Cannot Reach You 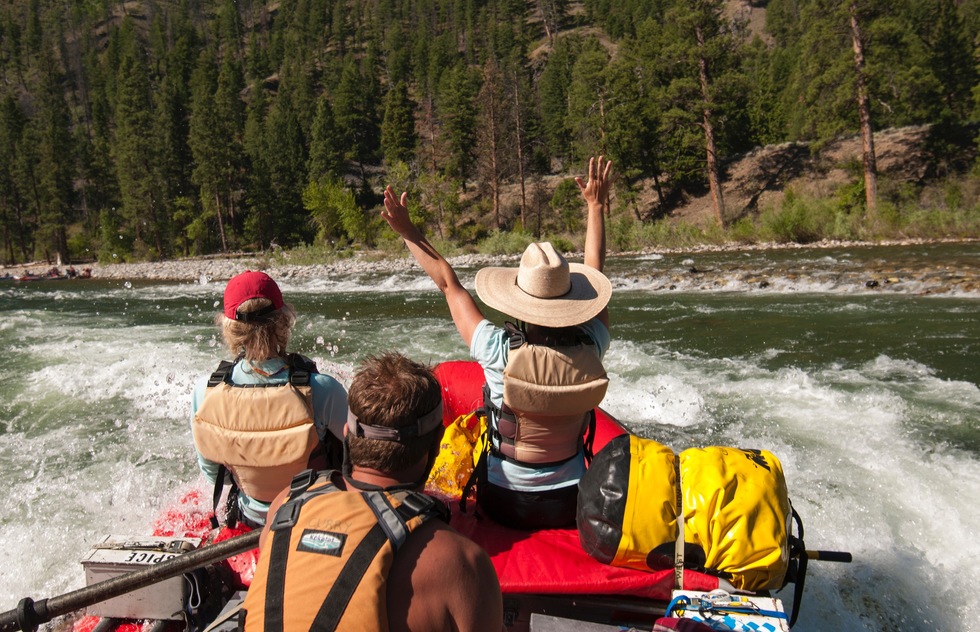 It’s a rare thing in our always-connected digital world to not know what’s going on beyond our own eyesight. But it happened to me in the middle-of-nowhere Idaho.

“If the world were blowing up around us right now,” said my scruffy travel companion, “we wouldn’t know about it. And that would be O.K. with me.”
This came from a New York City businessman, someone typically more clean-shaven and more accustomed to aggressively clutching his iPhone. In that moment, however, he was clutching a paddle, as was I. We were on a weeklong whitewater rafting trip with some 20 others, all of us floating past towering canyon cliffs blanketed with emerald pines under cobalt-blue skies. Nobody was posting selfies to Facebook or Instagram in that moment.
We were just few days into our trip down the Middle Fork of the Salmon River, a 105-mile journey through Idaho’s remote wilderness, where ensnarements like Wi-Fi and cell phone service don’t exist. (As in, don’t even try to get a signal because it’s not there.) All of us were embracing the reality—and the glory—of being unplugged. Truly unplugged.
Not many places in the U.S.A., much less the world, offer an epic outdoor adventure that doubles as a digital detox quite like the Middle Fork of the Salmon River. Even in the Himalayas of Nepal you can still get Wi-Fi. For me, this adrenaline-charged adventure, which came with no possibility of digital distraction, kept me tethered to the moment as I explored one of Mother Nature’s most spectacular rivers.
A water-soaked adventure
Accessible from Stanley, Idaho (population: 69), the Middle Fork of the Salmon River makes numerous outdoor “best” lists with good reason.
“It’s the finest alpine wilderness rafting trip in the world,” says Peter Grubb, president of ROW Adventures, the adventure travel company that organized my small-group, multi-night rafting trip. Those are bold words coming from a man who’s rafted some of the planet’s top rivers during his nearly 40-year career.
But it’s easy to see why he said them. The free-flowing river drops 3,000 feet in elevation during the weeklong float, along the way serving up natural hot springs, ancient Native American pictographs, waterfalls, hiking trails, and blue-ribbon fishing as it winds through the River of No Return Wilderness and the Impassable Canyon—both ominous-sounding settings that are, ironically, pure poetry when it comes to natural beauty and bounty. 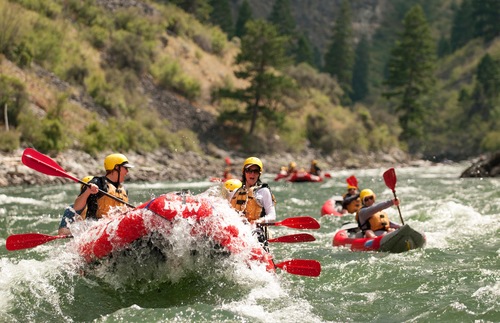 Photo: Chad Case
The names, however, do foreshadow the untamed wilderness that awaits—one where there are no roads, no signs of life, and no hospitals. The “no hospitals” news spooked me during the evening orientation before our morning river launch. What if I fell out of the raft? What if I broke a leg? What if I got sick?
But that was all part of the adventure for which I signed up. It’s also why it’s imperative to go with one of the outfitters that lead all-inclusive rafting-camping tours, to ensure that its guides have Wilderness First Responder training. I also made sure that ROW had a way to call for help if absolutely-positively necessary, if only to calm my “What ifs.” My river guides shared an emergency-only satellite phone. “We can call out, but nobody can call us,” explained Grubb.
Initial safety jitters aside, I always—always—felt taken care of as we navigated the more than 100 boulder-choked rapids bearing names such as Devil’s Tooth, The Chutes, Powerhouse, Sulpher Slide and Haystack, and Tappan Falls.
Regardless of whether I chose to ride on a large oar boat (where guides controlled the navigation), a paddle raft (where a team of us paddled in coordination, led by a guide) or a solo kayak (also known as a “duckie,” where navigation was up to me), the thrills were intense, but not overwhelming.
Sprays of water, punctuated by laughter and screaming, echoed through the canyons as we bounced and strategically zig-zagged through the rushing whitewater. There was no time to think about daily drama or to-do lists or social media updates in those moments. Even when I tumbled into the water (because yes, it happened), I was living in the moment, still smiling as my adrenaline intertwined with fear and a guide skillfully scooped me back into a boat.
Then, when we would emerge into sections of the river where the water turned calm, we’d all sit in silence, floating with the river’s smooth current, absorbed in the solitude of the setting. Those were my favorite moments: gliding along, feeling hugged by the unspoiled environment, with the soft melody of the river nudging us forward.
Natural isolation fosters community
Each year, nearly 10,000 people float the Middle Fork of the Salmon River during the season, June through September. This might seem like a lot, but it’s not. Permits aren’t “easy” to get, with only seven issued per day, a testament to the Park Service’s efforts to protect and preserve the setting from us humans.
Because only a handful of daily launches are allowed onto the Middle Fork, it wasn’t uncommon for our group to feel as though we were the only people on the river at times—pioneers of the 21st century traveling back to a time when things were simpler. 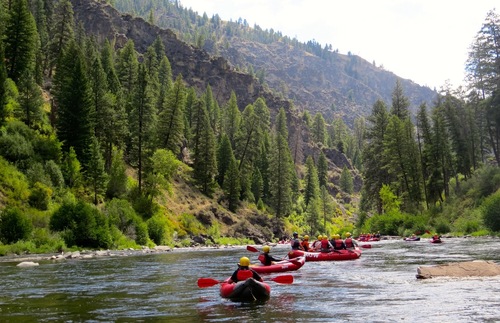 While nobody calls these parts of the Middle Fork home now, I couldn’t help but be jealous of those who once did: a small collection of hermits over the years. Their legends fascinated me. One such hermit, Earl Parrott (1869-1945), lived high above the river within the Impassable Canyon for more than 40 years. I can't imagine what it must have been like to live a life removed from civilization, much less the technology of today. A part of me was jealous of Earl.
But the camaraderie of that came with the Middle Fork journey reminded me that “civilization” isn’t all that bad. When our group would settle into our campsites for the night—which were always ready for us upon arrival, as were the scrumptious meals—I’d play horseshoes and drink moonshine with my rafters, most of whom were busy professionals looking to escape their respective realities, if only for a week.
Even though we were from different corners of the U.S.A., all of us craved a purity of life that time on this specific river was good at gifting. The rumbling hush of the river lulled us to sleep, just as its waters inspired an adrenaline-infused adventure during the day.
To close our days, we’d muse on life and the day’s events into the night, in front of the campfire, no smartphone in sight, under the most miraculous blanket of stars. Since we were far, far away from civilization, the nighttime skies were a celestial orchestra for the eyes. I spotted my fair share of shooting stars, and made a lot of wishes.
One was to remember what this time was like—to be truly unplugged, untethered and disconnected from the digital noise—and to be more disciplined about seeking these quiet moments out once back home.
But … when and if it ever gets too noisy, I always have this remote playground in Idaho waiting for me.