Thank you for subscribing!
Got it! Thank you!
Home›Trip Ideas›Outdoor & Adventure›In New Zealand, Bungee Jumping Is Fun Even If You Don't Jump 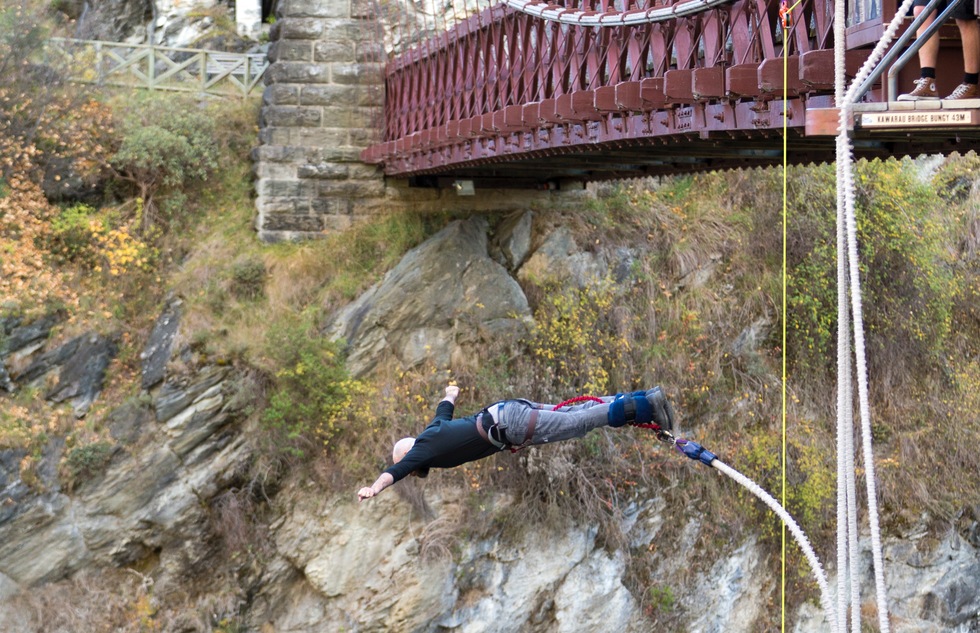 In New Zealand, Bungee Jumping Is Fun Even If You Don't Jump

How to soak up the rugged scenery, human drama, thrills, and chills of bungee jumping—without actually going over the edge

I really did intend to go bungee jumping while I was in New Zealand.

I’m not a thrill seeker by nature—I’m more of a Golden Girls watcher by nature—but bungee is something of a rite of passage in New Zealand, and I figured, when in Queenstown, do as the Queenstowners do.

In preparation for my jump, I got my hands on a GoPro camera to document the event. I had researched my chances of dying—1 in 500,000, which means that the likelihood of being on the wrong end of a snapped tether or unsecured ankle restraint is significantly less than getting struck by lightning (1 in 12,000) or dying in a car crash (a horrifying 1 in 113). I had even decided on what type of ghost I would be (spiteful, grudge-bearing) in the allegedly unlikely event that I didn’t survive the jump and was forced to haunt the suspension bridge over the Kawarau Gorge forevermore. 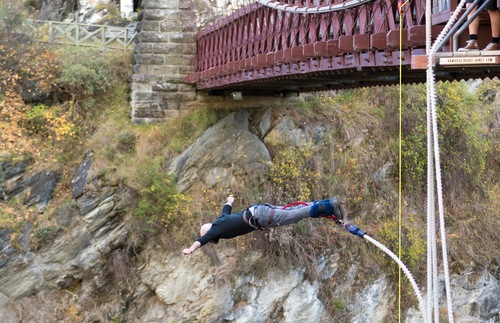 This is definitely not me. (photo: Tourism New Zealand)

Located just outside of Queenstown on New Zealand’s mountainous and impossibly scenic South Island, the bridge holds the distinction of being the site of the world’s first permanent, commercially operated bungee jump, set up by entrepreneur of daredevilry A.J. Hackett in 1988.

Falling from a great height while attached to nothing but an elastic cord wasn’t invented in New Zealand, but this is where it became available to the masses—or, at any rate, to those willing to shill out NZ$195 a pop (US$142) to turn themselves into human yo-yos.

The country has a taste for adrenaline-spiking adventure. Citizens may call themselves Kiwis—after a flightless, funny-looking bird known for being notoriously shy—but their preferred methods of recreation are on a grander scale. As a matter of fact, those pastimes fit right in with the country’s over-the-top landscapes. There are churning rivers for rafting, blustery coasts for windsurfing, jagged peaks for paragliding, redwood forests for mountain biking, hillsides for luging, and caves for spelunking. Maybe all that sublime scenery prompts a romantic urge to throw yourself into it and see what you’re made of. 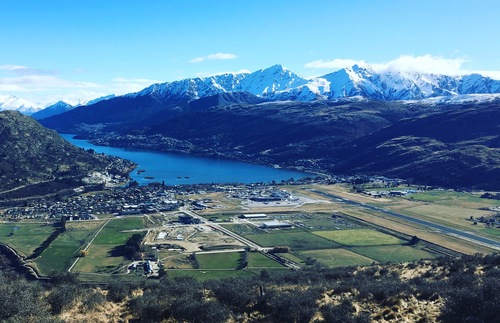 Turns out what I am made of is 100%, USDA-approved chicken. I took one look at the drop from the Kawarau bridge, suspended 43 meters (141 feet) above a swirling, chalkboard-green river, and had two thoughts: 1) “How pretty!” and 2) “No way am I jumping off this thing.” It was as though every evolutionary impulse within me had spontaneously broken out into a chorus of Third Eye Blind’s “Jumper”: “Wish you would step back from that ledge, my friend . . .”

And I was happy to oblige. 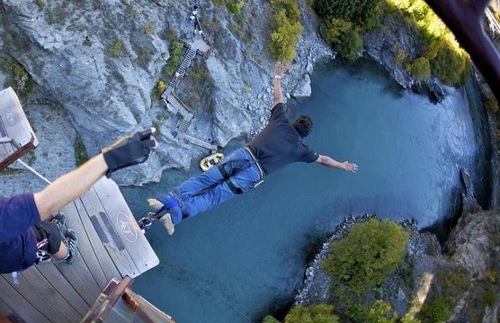 Once I had recovered my senses, I was able to enjoy one of the most surprising aspects of the Hackett operation: It’s pretty fun to be there even if you don’t go over the edge.

Not only can you take in the scenery and ride the zipline for a kinder, gentler—and, at NZ$50 (US$36), cheaper—alternative to the bungee jump. But if you station yourself on the viewing platform, in the bridge-facing café, or in front of a bank of monitors showing jumpers from several angles, you’re in for some truly riveting people watching.

And I mean that in an elemental, almost existential way—to observe jumpers throwing themselves into an abyss is to observe a primal human drama unfold. There are those who boldly swan dive over the precipice without a pause, looking like Icarus flying too close to the sun before finally succumbing to gravity.

Then there are those (and these are my peeps) who become frozen with terror on the platform for several excruciating minutes before backing out in shame.

The most agonizing to watch, though, are the ones who try to go feet first, like Wile E. Coyote running off a cliff. After the elastic reaches its lowest, tautest point and springs upward again, the feet-first jumper is inevitably jerked and whiplashed every which way so that even those of us just standing by might feel compelled to schedule an appointment with the chiropractor.

The fall elicits gasps from the crowd, but it’s those moments on the platform that I found spellbinding. You want bravery? You want pathos? You want stark terror? Behold yon tourist on the brink—screaming, alone, and headed toward who knows what.

Somewhere in there is a metaphor for life.

For a taste of bungee jumping at Kawarau Bridge, check out the promotional video below.

And here's footage of the far more sensible zipline ride (yep, this one is me):