Thank you for subscribing!
Got it! Thank you!
Home›Trip Ideas›Road Trips›When the Pandemic Closed Broadway, A Star Wrote a Delicious Memoir About RV Travel 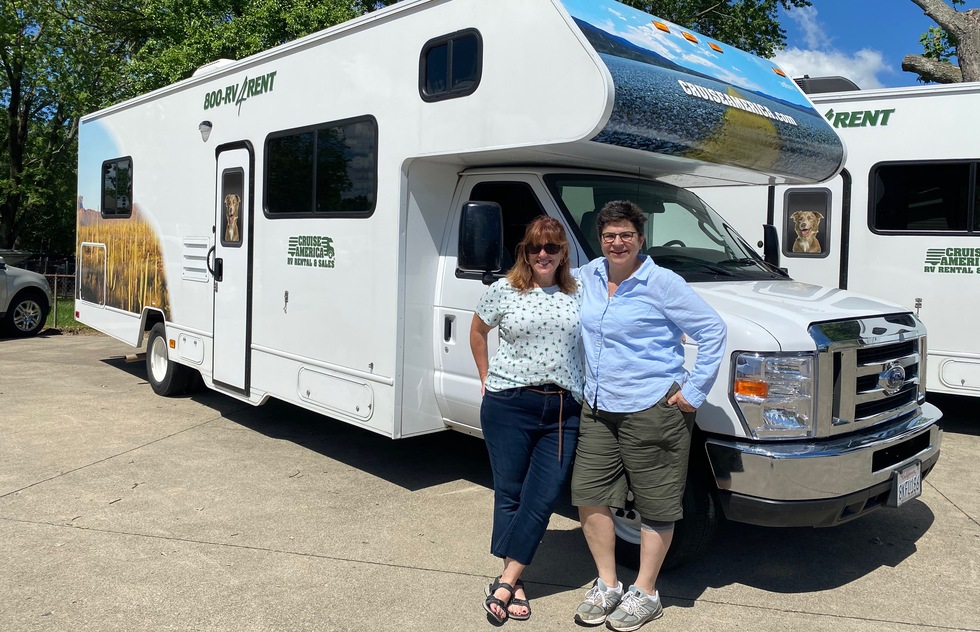 When the Pandemic Closed Broadway, A Star Wrote a Delicious Memoir About RV Travel

An excerpt from Sharon Wheatley's newly released travel book "Drive: Stories From Somewhere In The Middle of Nowhere"

Not many people in the arts see their dreams come true, but actress Sharon Wheatley is one of the favored few.

After years of performing in replacement casts on Broadway and in national tours, she created her first starring role in the smash Broadway musical Come From Away. A newlywed (to Martha Donaldson, a stage manager for Diana, The Musical) and a mom, Wheatley moved her children to New York City to settle in for the show's long run.

But, as we all know, a deadly virus had different plans.

During Broadway's hiatus, Wheatley needed to get her child to their father's home for the summer. She decided to go by RV, a move that branched off into a raft of adventures.

Wheatley's hilarious and moving book tells all about them.

This exclusive excerpt from the book takes place when Wheatley, her wife Martha, and her child Tobi camp out near the Grand Canyon during wildfire season:

The smoke smell in the campground was more present on the second day—enough that I checked in with a ranger. She assured me the wildfire was far away and would be contained. “It’s a little rough for the animals that live up there, but hopefully it’ll be over soon.”

We packed up the RV as best as we could and went to the nearby town of Tusayan, Arizona. While Martha found some Wi-Fi in a McDonald’s parking lot to attend another unconscious bias training meeting, Tobi and I ordered Mexican takeout from a little family restaurant called Playa Bonita. They seemed as grateful for the business as I was for their delicious chicken enchiladas.

We went back to the Canyon, watched the sunset, watched Ratatouille, and went to bed.

At six in the morning Martha and I woke up to a loud squeaking sound. I assumed it was Ethel rubbing her paws in her plastic litter box, a normal sound in our animal planet. I rolled over and closed my eyes to go back to sleep. The RV rocked from side to side, as it did whenever anyone rolled over in our house on wheels.

But this time when I rolled over and rocked our world, the rocking didn’t stop. Nor did the squeaking sound.

We laid and listened to it for a minute, feeling the rocking movement, which lined up with the squeak.

I sat up on my elbows and looked around.

“It sounds so close!” I said. "It sounds like it is coming from outside your window.”

I climbed over her as she slid open the curtains and right there, so close that we could touch it, was a giant brown head with large ears resembling a horse. And that giant brown animal was licking the side of our RV right under Martha’s window. Its tongue was creating the squeaking sound as it licked and licked. It appeared to be licking the area right where the hose was screwed into the water tank.

“Is that a horse?” I whispered.

“Why is it licking our RV?” 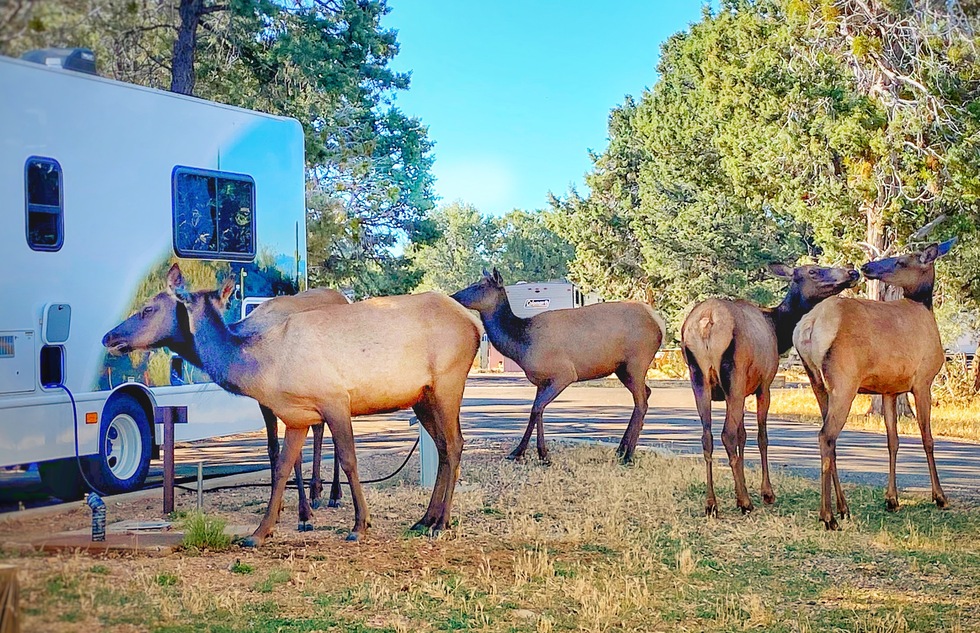 Martha thought for a minute, and then got up to check. "I forgot to turn off the water pump when we hooked up to the campsite water.”

“Don’t turn it off yet, this little guy is so thirsty. Let him drink.”

We watched in silence, in awe. I took a video because, you know, if you don’t film it, did it really happen? That elk licked and licked and licked. The dogs, who bark at everything, slept soundly. I sneaked over and woke up Tobi because if you don’t wake up your kid for a wild animal adventure in a national park, are you really a parent?

It was incredible. He was so close we could see the inside of his ears and we could see his little black nose wrinkle up as he drank. We could see every single eyelash. And he could see us, but he didn’t care. He drank.

I was in awe, Martha was in awe, Tobi was in awe. I’d worked so hard to make everything perfect that I’d forgotten the most memorable moments can be found by mistake. We climbed out of the RV and watched as more and more elk walked by, so near we could touch them.

I looked at Mar and Tobi and said, “My dad would be flipping out right now. I can’t believe he’s not here to see this. Listen to them calling to each other, do you hear it?”

We listened to the distinct call of the elk, the parents to their babies, telling them, I imagined, that it was safe. To come out and drink.

Soon the campground was overrun with herds of thirsty elk. People started putting out pans of water, filling coolers, anything to help the elk. We all ran around, astounded by the majesty of the moment, but sad about the cause. We united as we socially distanced, focused on one goal. Save the elk.

And then it hit me.

Tobi was my elk who I was protecting from harm. That’s what the RV trip was all about. Not my comfort, not Martha’s Diana job, but Tobi and the virus and delivering them safely.

And now, as we were getting closer to drop-off time, I was not grumpy, I was not hating the RV, I was just sad to say goodbye.

I kissed Tobi’s face all over and said, “I am going to miss you, so much, kid.”

I’d do anything for that little smile.

Drive: Stories From Somewhere in the Middle of Nowhere is published by River Grove Books.