Thank you for subscribing!
Got it! Thank you!
Home›Trip Ideas›Theme Park›How Splash Mountain Became Disney's Most Problematic Ride 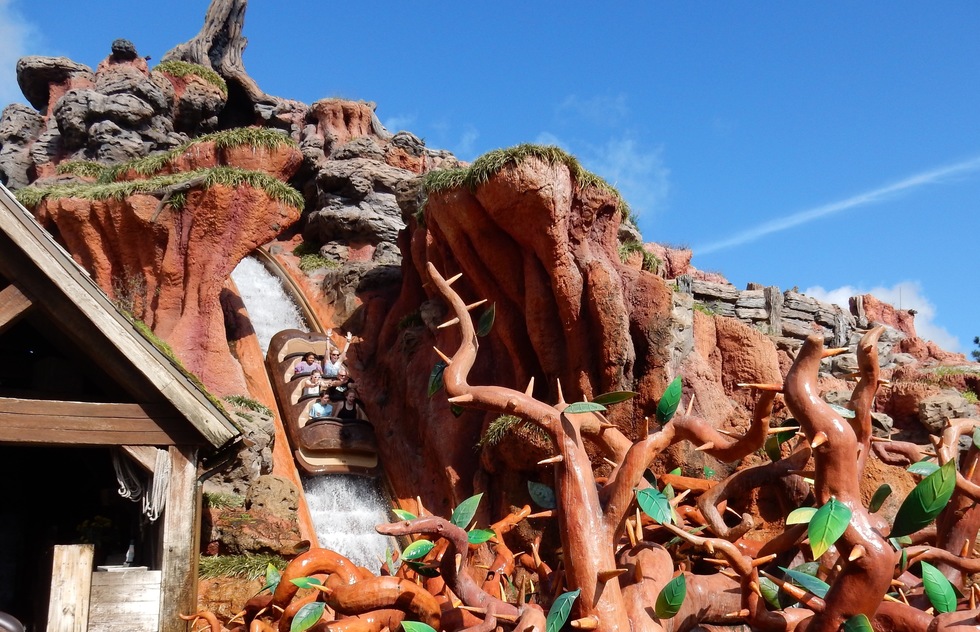 The original stories were revisionist history. The 1946 source film was picketed. Yet in 1989 Disney still went ahead and made "Song of the South" into a ride. Here's how Splash Mountain became such a thorn in Disney's side.

"The National Association for the Advancement of Colored People expressed regret yesterday over Walt Disney's new production, Song of the South, on the ground that it is helping to perpetuate the impression of 'an idyllic master-slave relationship' in the South.

"Walter White, executive secretary, in telegrams to newspapers, stated the association recognized the artistic merit of the picture, but added, 'It regrets, however, that in an effort neither to offend audiences in the North or South, the production helps to perpetuate a dangerously glorified picture of slavery. Making use of the beautiful Uncle Remus folklore, Song of the South unfortunately gives the impression of an idyllic master-slave relationship which is a distortion of the facts.'"

Despite those valid criticisms of Song of the South—described at the time as "an insult to minorities" by Harlem Congressman Adam Clayton Powell, Jr.—in 1989, Disney took the movie and adapted it into Splash Mountain, which would become one of the most popular rides at Disney parks.

Even at the time of the ride's debut, the company knew the movie was objectionable. Then, as now, it was deemed too racist to distribute commercially—at least in the United States. Disney was willing to release the film in foreign countries, where racial scrutiny was not as intense. 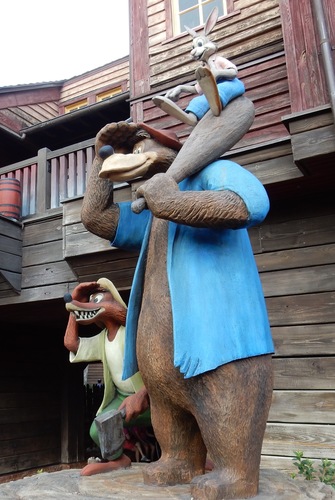 Cleaning up the source material

The Uncle Remus tales were first published as a book in 1880 by a Georgia-born journalist, Joel Chandler Harris, who wanted to create a new literary mythology that could instruct the world about the ideals of the New South. The region had a terrible reputation owing to its role in the Civil War, the financial ruin that followed, and more generally in perpetuating a system of violent racism.

To Harris, that reputation required a retort. Like the women who campaigned to install Confederate statues across the land at the turn of the last century, Harris wrote to put a positive and nostalgic spin on Southern culture.

The author's version of the post-slavery South wasn't the real one, in which freed Black people were denied education, hunted by racists, and terrorized for daring to be elected to government positions. Instead, Harris' formerly enslaved Uncle Remus loved his former owners so much that he didn't want to find a new life after emancipation. Instead, he stuck around their plantation, living in a shanty and telling stories to little white children who lived in the opulent mansion. Spike Lee has witheringly called Remus "a super-duper magical Negro.”

If it sounds like pure fantasy, that was Harris' intention. Although he was white, he retold African American folktales—what we'd call cultural appropriation today. But at the time, Harris was seen as elevating Black stories to a worldwide platform.

You can almost understand how Walt Disney the man had been raised to think this was appropriate source material for a movie. Remus was a great storytelling character, and Disney probably saw something of himself in that. Wrong as it was, the film's sweetened image of Dixie was accepted almost as documentary by mainstream white audiences when it was released.

Disney's idea for the picture was to film the storyteller and his friends in live action, but to render the tales as animation. Walt's notion was that the effervescent universe of animation was a perfect fit for showing audiences the appeal of Ol' Dixie. As the Times review wryly put it, "The ratio of 'live' to cartoon action is approximately two to one—and that is approximately the ratio of its mediocrity to charm."

Walt was so convinced his film belonged alongside the classics that he successfully lobbied for the actor who played Uncle Remus, James Baskett, to receive an "honorary" Oscar. The picture won Best Original Song, too, for "Zip-a-Dee-Doo-Dah," and the validation seemed to quell the controversies for a while.

It's much more of a wonder how Disney the company could be daft enough to take that material and turn it into a ride in the 1980s.

From the start, the Song of the South log flume ride was a Frankenstein's monster that was assembled out of need and thrift. As the story goes, Imagineer Tony Baxter was handed the task of designing a ride that would excite teenagers. Around the same time, a robotic musical show called America Sings was slated to close, leaving Disney with a warehouse full of Audio-Animatronic animal characters and nowhere to use them.

Disney is a big recycler. Some of the reanimated corpses residing at Phantom Manor at Disneyland Paris lived previous lives in Future World at Epcot in Florida. In the case of Splash Mountain, the animals from America Sings looked stylistically correct for Song of the South, which helped solidify the decision to go ahead.

Disney execs were satisfied with the savings (though the final attraction cost $75 million), but still needed to address the nagging problem of the racist source material. So they decided to simply omit Uncle Remus. With the main Black character erased, the most racist tropes were deleted or transferred to animals, where they could simply be interpreted as the hijinks of country bumpkins.

At the time, Imagineers thought they had solved the problem with that crude amputation. The final 11-minute experience centers on Remus' animal characters—his stories having come to life, they no longer required his presence.

The company thought that would be enough.

The creatures had no obvious race, but they still spoke in a cultural shorthand. Their boneheaded antics and stylized patois were firmly rooted in oafish minstrel traditions. The way the animals acted and sounded would be familiar to generations who grew up with Stepin Fetchit, Buckwheat, or Amos 'n' Andy—Splash Mountain just removed the Black skin. 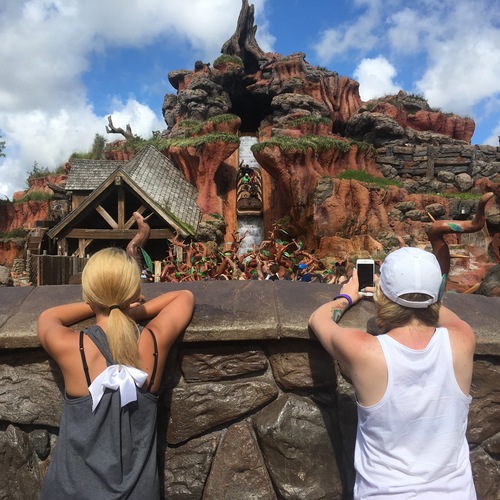 The cobbled-together ride was incoherent but wildly fun—and on that basis it became one of the most popular attractions in Disneyland, an honor it still holds. Within a few years, an updated version opened at the Magic Kingdom at Walt Disney World and another at Tokyo Disneyland.

And that's where we've been for the past three decades. Disney has known full well that the property was tainted—as a matter of fact, Disney knew that on the night of the film's 1946 release, when picketers marched around Times Square's Palace Theatre, where the movie premiered. Protesters carried placards declaring, "We fought for Uncle Sam, not Uncle Tom.” (The full story of the revulsion inspired by Song of the South is documented in Disney's Most Notorious Film by Jason Sperb.)

Disney held a wolf by its ears. A headliner ride was based on one of the studio's most objectionable properties. What had it gotten itself into?

Leaving Song of the South behind

Now Disney is getting itself out. Following recent headlines about a public campaign of petitions to force Disney to re-theme the ride to 2009's The Princess and the Frog, the company has finally announced it will do exactly that.

Not coincidentally, The Princess and the Frog was the company's first animated feature starring an African American princess. The movie is set in 1912 New Orleans and the Bayou—not a far cry from the swamps of Uncle Remus when it comes to geography, but generations away in content and tone.

In 1946, when Song of the South premiered, Disney lost the confidence of important Black voices like Adam Clayton Powell, Jr., and Walter White. For the rollout of the revamped ride, the company is trying to avoid a recurrence. This time, it created memes made out of endorsements from several Black performers and Disney executives. 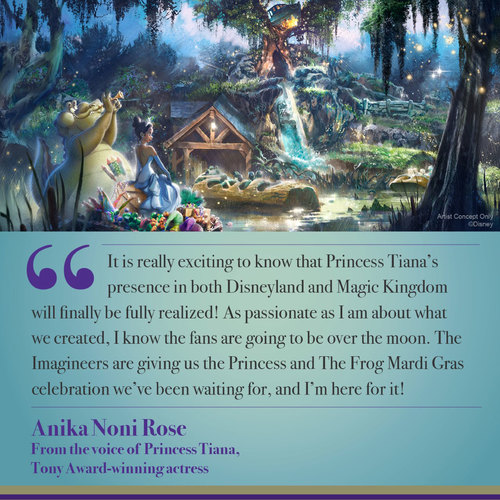 In the very first line of the announcement, Disney asserts that this is a "project Imagineers have been working on since last year." Is that a signal by the company that it won't be cowed by petitions? Or is it yet another sign Disney chose not to acknowledge the ride's issues even though it saw them? Whatever the reason Disney felt it was important to qualify the origin of the coming redo, it took the popular uprisings of 2020 to finally goad the company into action.

No date has been set for the change. Splash Mountain is a mammoth draw in the heat of summer, but the ride usually closes for several weeks each winter. The company might give the attraction one final season in the current form.

So far, the change has also only been announced for Disneyland and Walt Disney World. The third version, in Tokyo, is owned by the Oriental Land Company, which will make its own decision. (For the record, Disney continued to release Song of the South in Asia long after determining the movie was inappropriate for American audiences.)

Ride along on Splash Mountain with this complete trip shot in Florida. Listen in particular for that pidgin version of a "Southern" patois that Harris used for his Black characters.

Update, July 2022: Disney has announced that the revised version of Splash Mountain will be called Tiana's Bayou Adventure. It is scheduled to open in late 2024.

Update, January 2023: The last day of operation for the Walt Disney World location of Splash Mountain was January 22, 2023.

Jason Cochran is the author of Frommer's' award-winning guide to Walt Disney World and Orlando, available in paperback and as an e-book.