Thank you for subscribing!
Got it! Thank you!
Home›Trip Ideas›Winter Sports›What to Expect When You Stay Overnight at the Quebec Ice Hotel 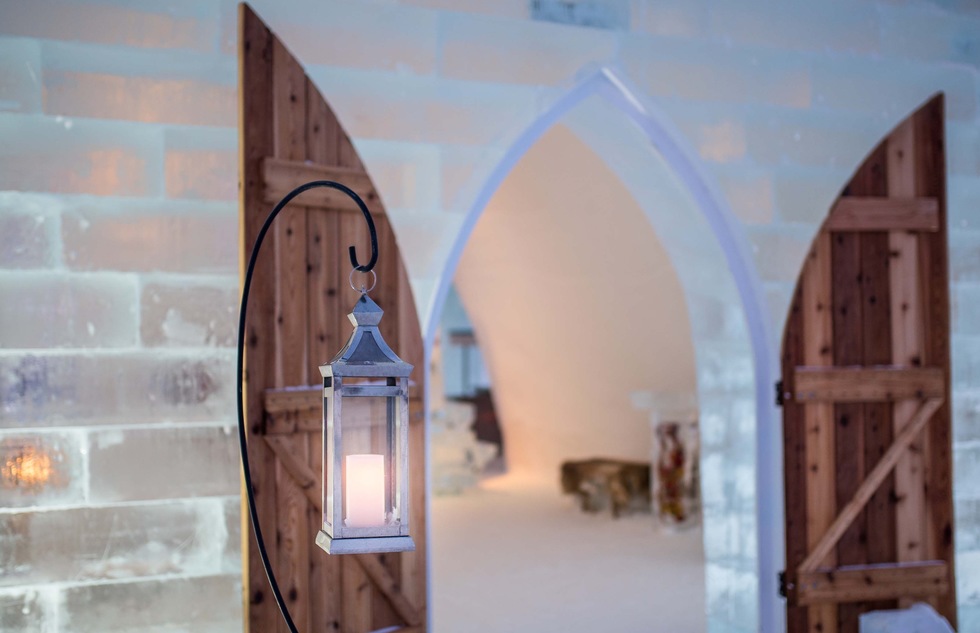 Every winter, North America's only ice hotel is rebuilt in Quebec. Here's what you need to know before checking in.

Quebec’s Hôtel de Glace—or Ice Hotel for stubborn English speakers—does require about 500 tons of ice for its construction each December, but the sleek and slippery stuff is mostly confined to decorative uses: for furniture, sculptures, and glassware. The frosty, fluffy stuff makes up the actual walls, giving them a texture less like ice cubes than sherbet that’s been in the freezer too long.

The snow is tightly packed to create rooms that trap the body heat of the people inside (a trick learned from the Inuits) and molded into pointed arches for sturdy supports and high ceilings (a trick learned from Gothic architects). It takes a team of 30 builders and 15 sculptors and decorators about six weeks to make 40 or so themed rooms and suites, a central hall adorned with chandeliers and artwork, an ice bar, and an ice chapel used primarily for weddings.

All of the above—except, with luck, the marriages begun in the ice chapel—will be gone by the end of March. But in the two and a half months before the thaw sets in, scores of overnight guests will bed down in North America’s “only ice hotel.” Here’s what you need to know before checking in. 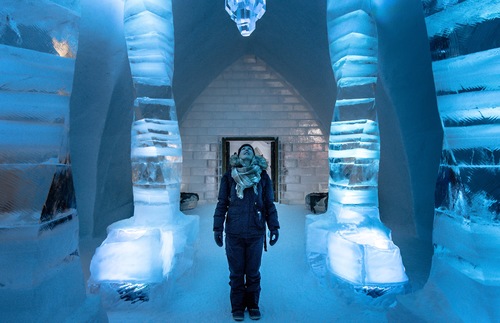 The Hôtel de Glace has been part of winter in the Quebec City area since 2001. Inspired by Sweden’s Icehotel, the first Quebecois version was built against the dramatic backdrop of Montmorency Falls. The frozen lodging was later moved to a lakeside nature retreat and then the former site of a zoo before landing, in 2016, at its current home, Village Vacances Valcartier, located about a 45-minute drive northwest of Quebec City. Among locals, this year-round family resort is best known for its elaborate network of 36 snow tubing hills. There’s also an indoor water park, a spa, a bricks-and-mortar hotel, shops, restaurants, and, in the warmer months, outdoor water slides, hiking trails, and cabins.

Those staying overnight at the Ice Hotel should expect to spend quite a bit of time in the bricks-and-mortar facility because that’s where lockers and bathrooms are. Rooms at the Ice Hotel are strictly for sleeping. If you were imagining ice closets with ice hangers and ice bathrooms with ice toilets, think again.

This results in a lot of back-and-forth. Let’s say, for instance, you’d like to have a cocktail in the ice bar and take a soak in one of the outdoor hot tubs before retiring to your igloo. That means you have to go to the locker room to gear up for the cold—donning a hat, scarf, gloves, coat, thermal underwear, snow pants, and boots—before heading to the bar, then go back to the locker room to take everything off and slip into your swimsuit for the hot tub, then go back to the locker room to dry off and brush your teeth and re-gear up for the cold, and then finally trudge to your room at the Ice Hotel, where you’ll remove your outerwear yet again before crawling into a sleeping bag. It’s kind of exhausting.

You can always simply hang out in the ice bar or buy a day ticket to tour the Hôtel de Glace. But for visitors who subscribe to a when-in-Nome-do-as-the-Inuits-do philosophy and are willing to pay the nightly rate, sleepovers begin with an orientation session. It’s full of important safety info and highly Canadian statements like, “It’s no worse than camping in January!” and “The temperature is only 5 degrees below zero!” (in Celsius, which is 23° Fahrenheit, but still).
advertisement 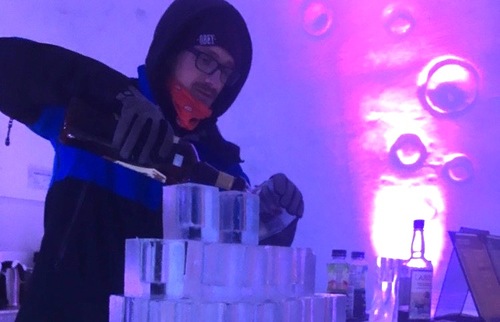 Ice Hotel rooms are ready for guests starting at 9pm each evening, but the bar stays open until midnight and you might as well put some fire in your belly (but don’t drink too much or you’ll think you’re warmer than you are). Beds are platforms of ice topped by an insulated mattress. Once guests arrive at their rooms, they’ll each find a sleeping bag designed to withstand temps as low as -30° Celsius (-22° F). Indoor temps at the hotel are around -5° Celsius (23° F), which believe it or not is fine.

Within the sleeping bag, don’t wear too many layers lest you start sweating and wind up wet and chilled. Dry socks and thermal underwear should do it, though make sure the material is lycra, wool, nylon, or any other fabric designed not to retain moisture—cotton is a bad idea. You can store small personal items like your cell phone, extra socks, and babies under 2 years old in your sleeping bag with you. Put eyeglasses in your boots; otherwise they’ll freeze to the nightstand overnight. The light switch is on the bed frame so you don’t have to slither and hop back to the door after getting into the sleeping bag.

If it gets too chilly for you, you can return (in disgrace) to the heated indoor facility and grab a bunk in a dormitory next to the locker room. Staff members are around all night in case of emergency. There are fireplaces in the Ice Hotel’s suites, but they’re insulated and therefore just for show—if they actually gave out warmth, it would rain in your room. The next day at 8am, an employee comes ‘round to each doorway and calls out, “Bonjour! Good morning!” in the universal singsong used by parents to wake dozing youngsters. 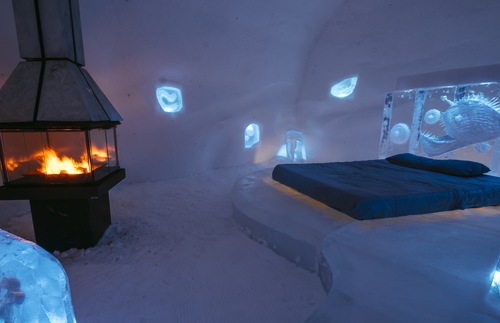 And how is the sleeping experience? To be honest, I didn’t have the soundest slumber of my life—though the Ice Hotel is almost eerily quiet owing to the heavy insulation and lack of electronics. The sleeping bag does its job of keeping bodies toasty, but it’s awfully constraining if, like me, you man-spread in your sleep. And the padding situation isn’t much of an improvement on the cold hard ground. It is, after all, a lot like camping in January.

So you might not leave feeling refreshed. But what you lose in REM sleep you gain in bragging rights and bolstered outdoorsmanship. In true Quebecois fashion, a night at the Ice Hotel is a way of wholeheartedly embracing winter—and letting it embrace you in return.