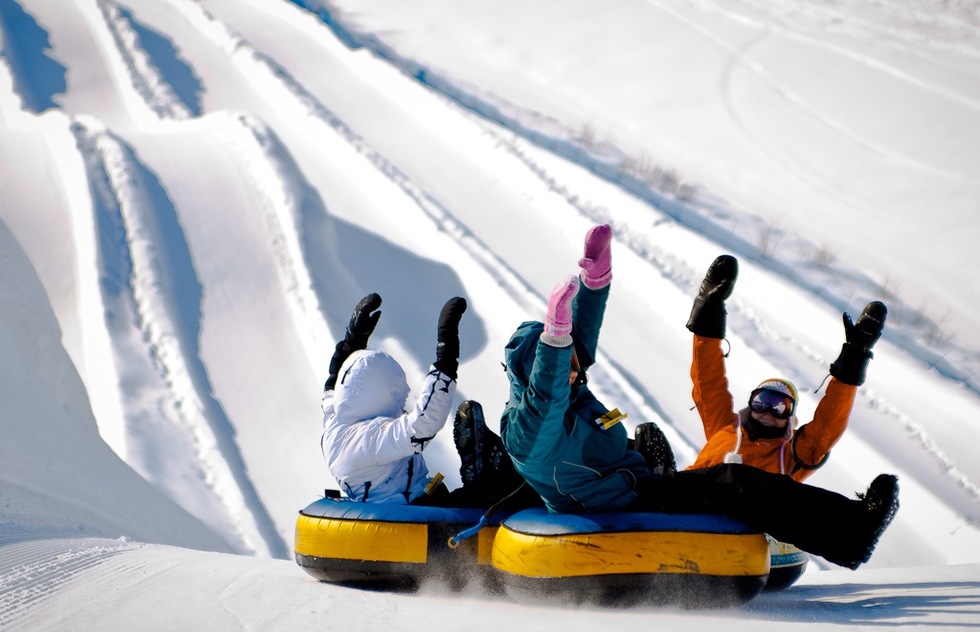 Quebec Winter Activities That Make It Hard to Hate the Cold

Like blue cheese and Björk, winter is an acquired taste. That’s especially true for those of us who grew up in climates where jackets are rarely buttoned and light snow flurries cause buying panics at the Piggly Wiggly. In the predominantly French-speaking Canadian province of Quebec, on the other hand, winter is not treated as something to be loathed or feared but as a good old friend—albeit one who’d kill you if you spent too much time together.

And here’s the thing about Quebec’s cold-weather joie de vivre: It’s contagious. Spend just a few days exploring frosty Quebec City and its woodsy environs (as I did at the invitation of the tourism office), and you might be surprised by how effectively a little snow tubing, ice fishing, and winter carnival-going can counter seasonal affective disorder. Call it winter aversion therapy. Now strap on some snowshoes and let’s start treatment. 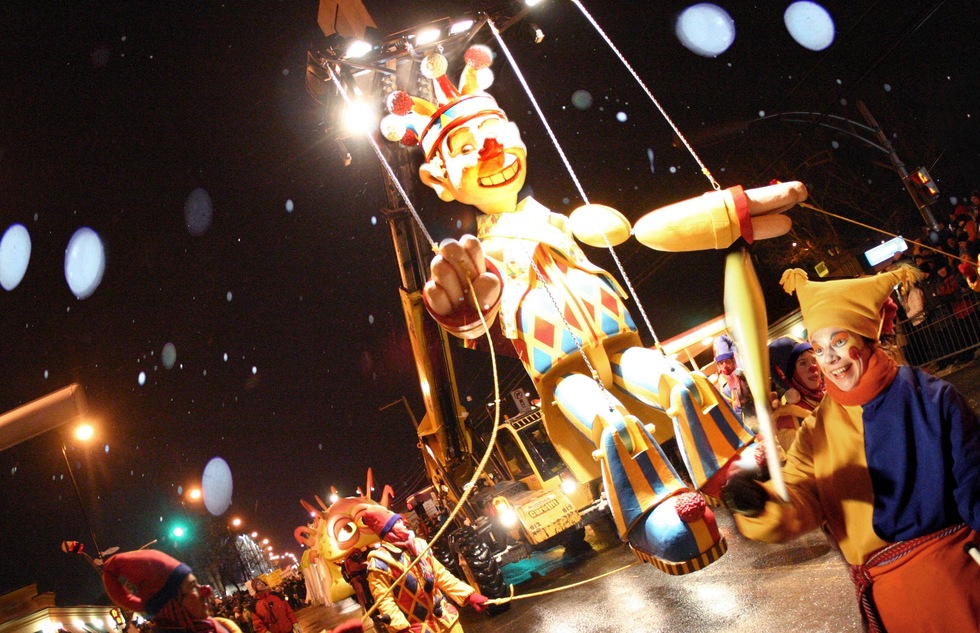 Each year for a roughly two-week span from late January through early February, Quebec City throws a big party celebrating all things chilly. Though centered on the place de l’Assemblée-Nationale and the Parc de l’Esplanade near the provincial parliament building, the event takes over the whole town. In addition to night parades (pictured above), balls, concerts, games, and food stalls, the festival shows off an impressive array of stuff made out of ice: sculptures, an elaborate palace made for touring, slides for luging, and rinks for skating and curling. Even the ice of the city’s Saint Lawrence River plays a (literally) supporting role in the carnival’s oddly hilarious canoe races, during which teams paddle until they reach solid stretches and have to drag their vessels along on foot. After dark, blue and purple lights give the ice structures a frozen fairyland feel, while pop-up pubs supply restoratives and accordion-accompanied sing-alongs. Maybe it’s the maple-syrup-flavored whiskey talking, but why would anybody ever prefer summer? 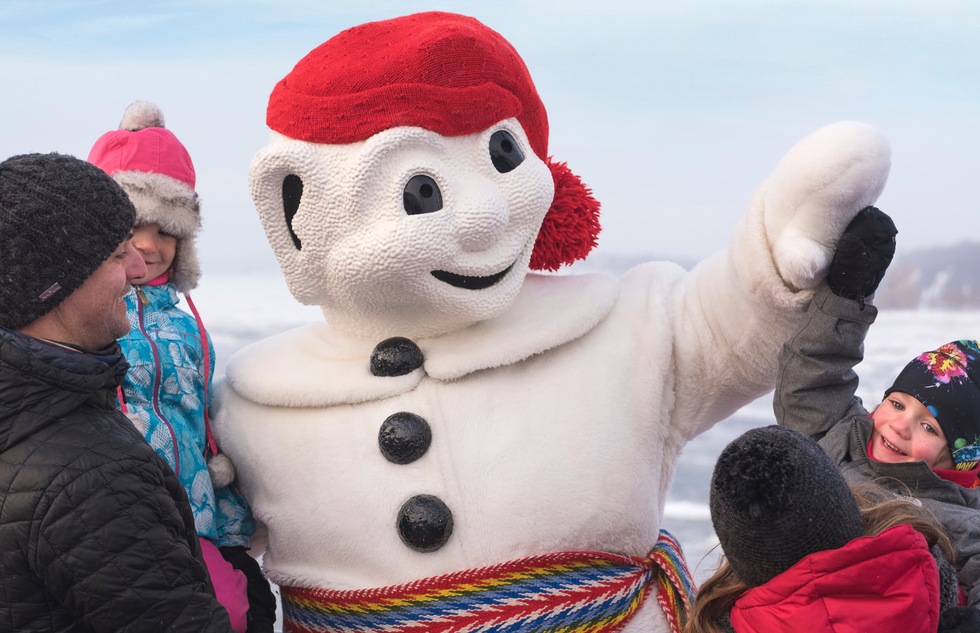 The king of the Winter Carnival—and don’t you dare call him a mascot—is Bonhomme, an irrepressibly jolly 7-foot-tall snowman who has an effect on Quebecers of all ages equivalent to the Beatles’ effect on an Ed Sullivan Show audience. The carnival’s headliner since its first official iteration in 1955 (though informal winter fests had been held in Quebec City for decades before that), Bonhomme can be spotted causing mass hysteria at daily public appearances throughout the event’s run. His wide toothless grin is represented everywhere, including on the collectible plastic doodad, called an effigy, that serves as your admission ticket.

You might mistake Bonhomme for the Michelin Man were he not wearing his distinctive red cap on his head and arrow sash around his waist. The latter is a nod to the practical accessory worn first by Native peoples and later adopted by French fur traders and loggers, who used the tightly woven sashes to store tools, stay warm, brace their backs, and even drag timber. Other aspects of French Canadian culture on display at the carnival: plaid-clad historical reenactors, wood-cutting demonstrations, and hatchet throwing, which I bring up to point out that I hit the bullseye on my first attempt. 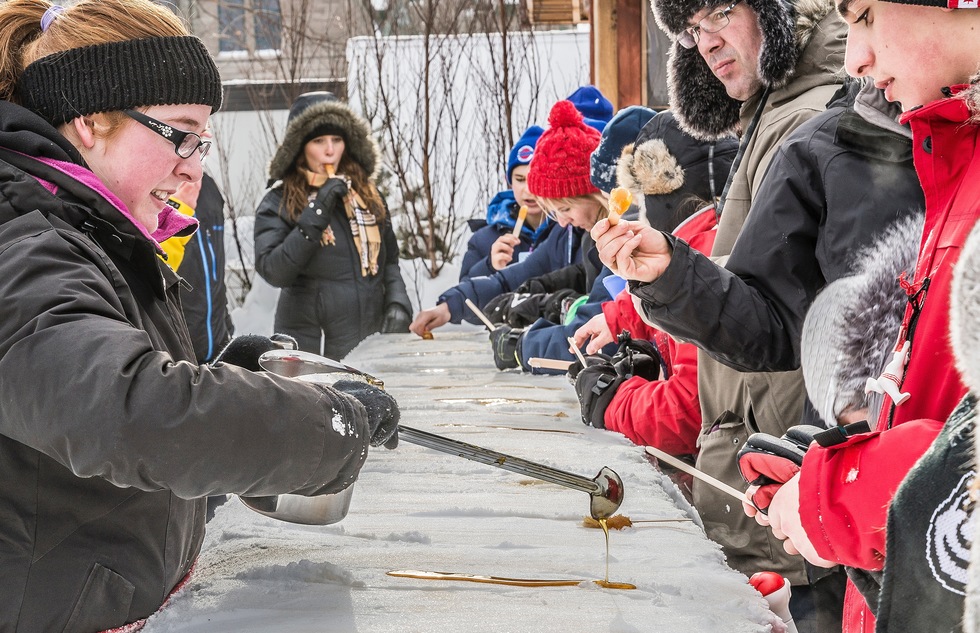 You shouldn’t reduce Quebec cuisine to poutine and maple syrup. But that doesn’t mean you should deprive yourself of those delicacies either. Options for stick-to-your-ribs servings of french fries smothered in cheese curds and brown gravy (which is what poutine is, in case you didn’t know) run the gamut from quick, hearty orders at the Chez Ashton chain (various locations throughout Quebec City) to gourmet poutine topped with duck or thick-cut bacon at restaurants like La Bûche (49 Rue Saint Louis), a rustic spot inspired by traditional maple syrup sugar shacks.

And speaking of maple syrup, the province’s most storied foodstuff tastes great drizzled over crepes, frozen on popsicle sticks (that's what's being prepared at the Winter Carnival in the photo above), and baked into pouding chômeur cakes. At the bars along Quebec City’s Grande Allee, you can even sip a maple syrup/whiskey combo called Sortilège. It’s a more accessible alternative to the traditional lumberjack drink: red wine fortified with whiskey or brandy and flavored with spices. It’s called caribou, but I couldn't find a local with a good explanation for why. 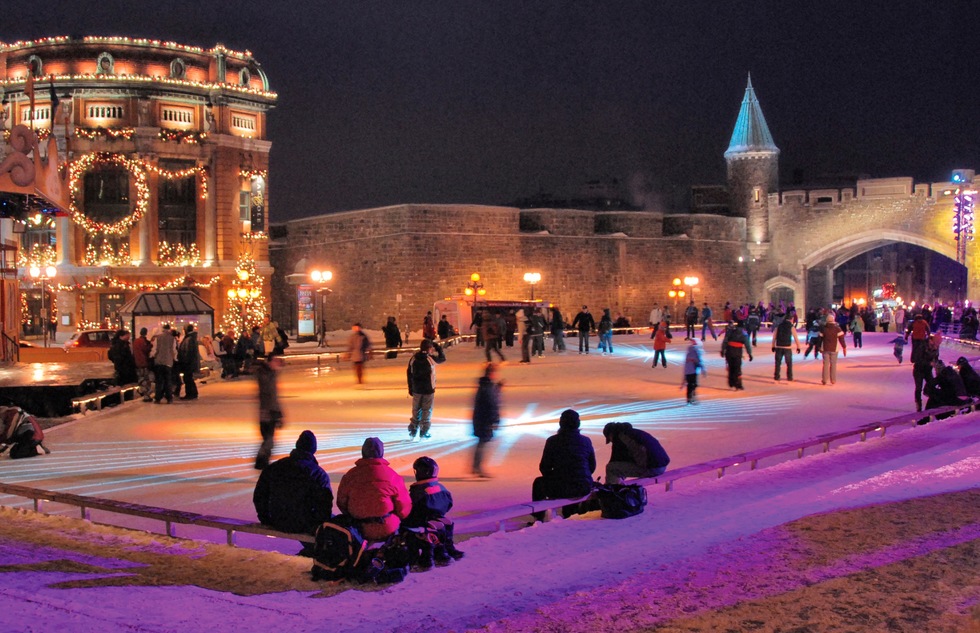 There’s plenty of cold-weather fun to be had in Quebec City in the weeks before and after the carnival, too. From mid-November to mid-March, the Place D’Youville ice skating rink (pictured above) in the historic core makes for a romantic spot to perfect salchows and lutzes with the old city walls as backdrop. Cross-country skiers can tax their thighs at the Plains of Abraham battlefield next to gorgeous views of the frozen Saint Lawrence River. And a waterfront slide swooshes tobogganers down to a wide terrace at the base of the imposing Château Frontenac, a landmark luxury hotel that was built in 1893 and quickly thereafter became the city’s most recognizable symbol.

Those not interested in skates, skis, and sleds can simply stroll through the charming squares and winding streets of Old Quebec, dating to 1608 and a UNESCO World Heritage Site. Now housing attractive boutiques and restaurants, the neighborhood’s stone buildings, with their sharply sloping roofs, look like they were airlifted in from a small village in France. Holiday decorations stay up to keep things festive long after December. 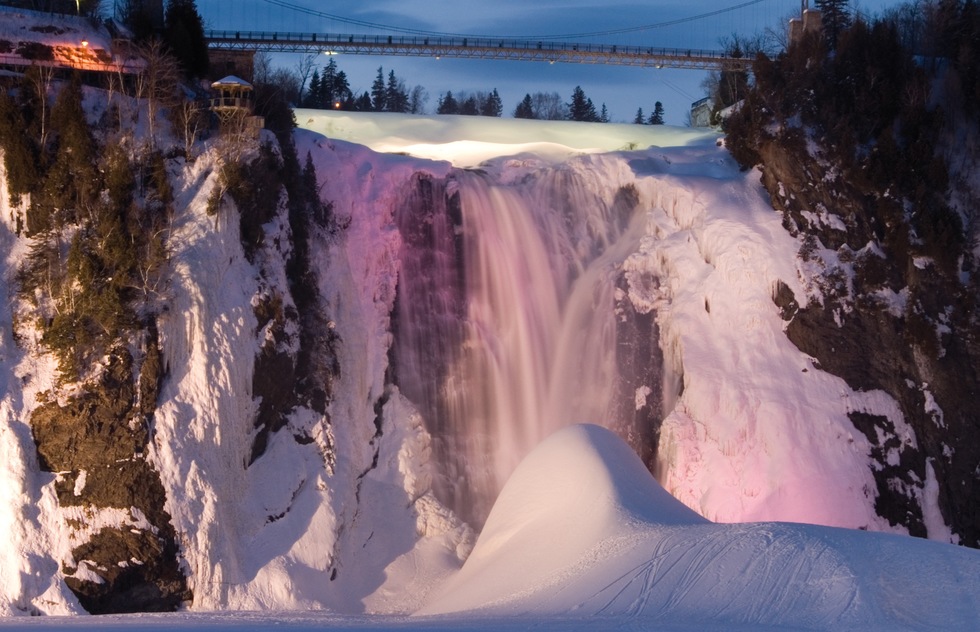 Located about 15 km (9 mi) north of Old Quebec, Montmorency Falls is an impressive sight no matter the season. In fact, at 83 m (272 ft) high, the cascade is more than 30 m (98 ft) taller than Niagara Falls. In winter, the water continues to thunder over the cliff at Montmorency, but huge frozen pillars form on both sides of the torrent, attracting ice climbers who evidently don’t care how queasy the very thought of their sport makes the rest of us. Far more sensible are the sled riders zooming down the hill of frozen foam at the foot of the falls. This annually reappearing lump of snow and ice is known by locals as the Sugarloaf. 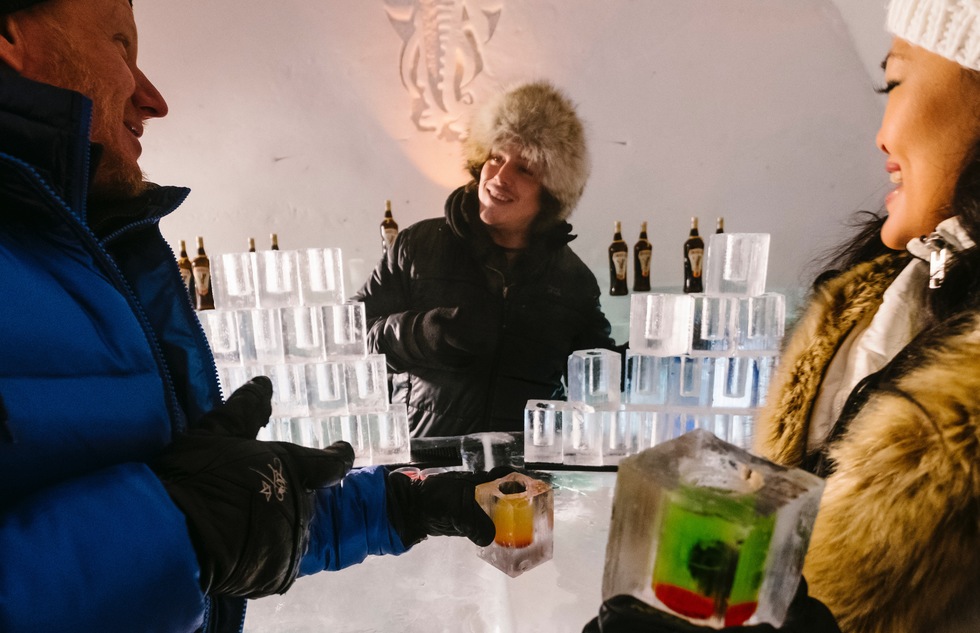 The original claim to fame of Village Vacances Valcartier, a resort situated about a 45-minute drive northwest of Quebec City, was the site’s elaborate network of snow tubing hills. Those are still there, along with a spa, an indoor water park, and several outdoor hot tubs for that icy shoulders/boiling abdomen effect. But the resort’s most distinctive offering nowadays would have to be the Hôtel de Glace, North America’s only hotel constructed entirely out of ice and snow.

Each December, some 30,000 tons of those building materials are used to sculpt 40 themed guest rooms and suites as well as an ice bar (pictured above), where you can rest assured the drinks are kept chilled. There's even an ice chapel used mainly for weddings (does Patagonia make Gore-Tex bridal gowns?). Since toilets, showers, and other crucial amenities are housed separately in a building nearby, rooms at the ice hotel are strictly for sleeping—and that’s not exactly easy to do because the place doesn’t get warmer than 20 degrees Fahrenheit (minus 6 Celsius) and guests have to remain tightly cocooned in heavy sleeping bags on top of their beds. But hey, you get to tell friends you slept in an igloo. 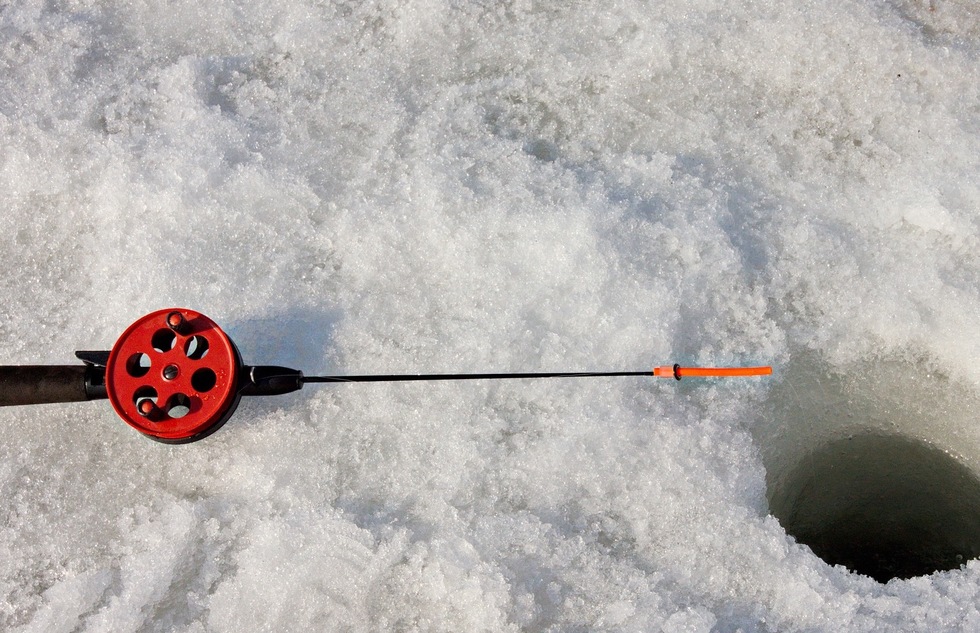 There’s an area within Quebec City limits for ice fishing called Village Nordik du Port de Québec, where anglers gather in inflatable igloos on the frozen surface of Louise Basin. But it’s one of the rare non-picturesque parts of town, set against an industrial backdrop of factories and smokestacks. For more idyllic scenes, head west of the city for the woodsy, lake-dotted regions of Mauricie and Lanaudière between Quebec City and Montreal. At rustic retreats such as Pourvoirie du Lac Blanc (a pretty 2.5-hour drive from Quebec City and a 2-hour drive from Montreal), visitors can opt for reasonably priced fishing excursions during which a guide takes them out on the ice, drills to the water, sets up lines, and grills up any trout they catch on the spot. All that remains to be done is drink caribou until there’s a fish to reel in. 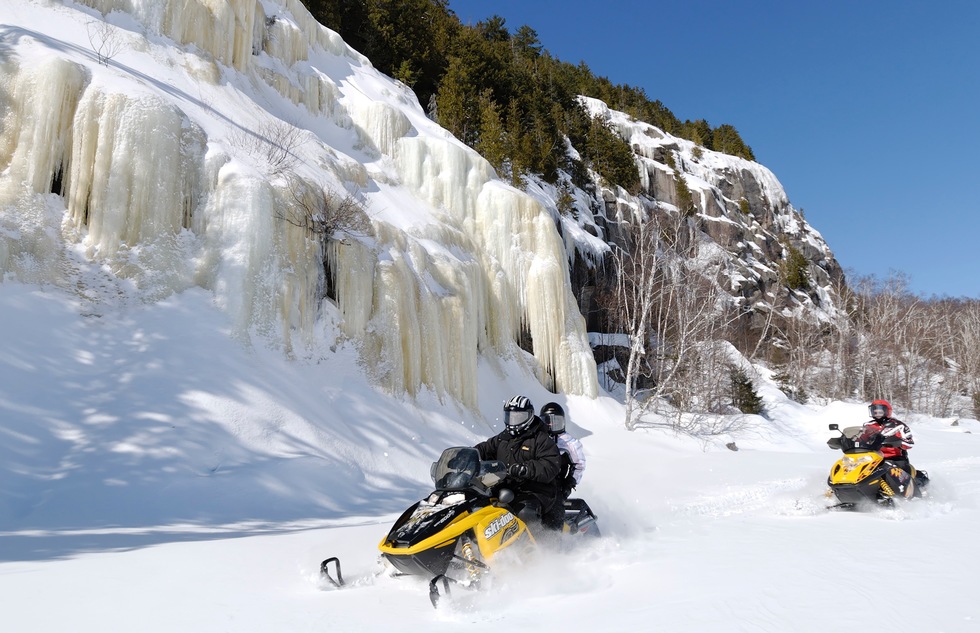 M. Julien
Dashing through, on, and above the snow

It’s also possible to go on dogsledding tours in the region, but some visitors might feel conflicted about letting teams of pooches huff and puff in frigid conditions just to drag tourists around in a loop all day. The dogs seem eager to do it, and for the record, the Humane Society doesn’t explicitly condemn the practice—though the organization does warn against commercial and competitive mushers who overwork their dogs, make them sleep outside in subzero temps, or otherwise treat them cruelly. So proceed with caution.

For high-speed trips through the snow sans icy puppy paws, rent a snowmobile or take a scenic flight in a prop plane over the landscape you’ve been exploring; daily tours take off from the Auberge du Lac Taureau in Lanaudière. Or if you’re worried about your carbon footprint, you can always stick to snowshoes. 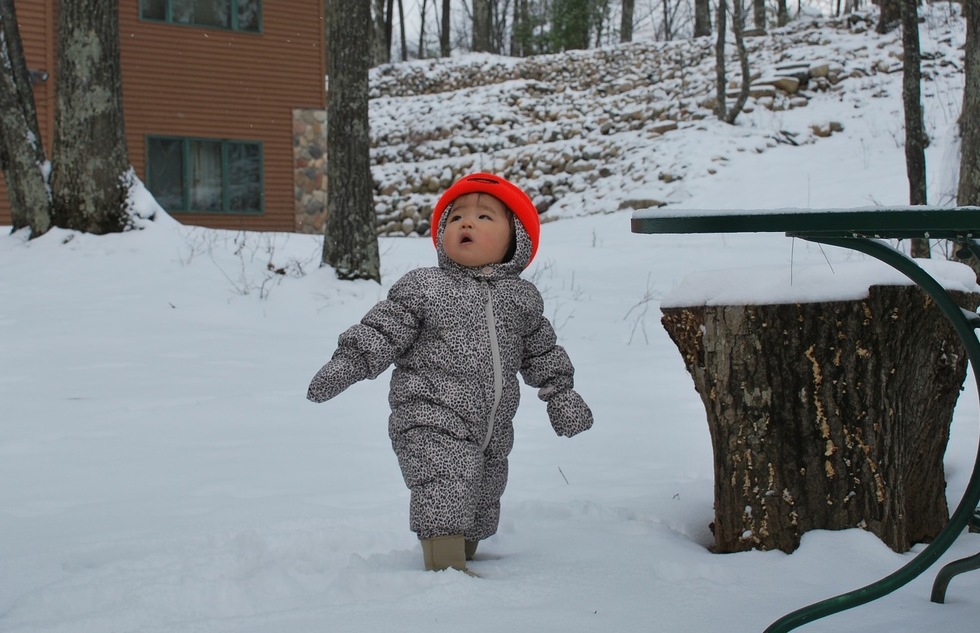 Pixabay
Some tips for not freezing to death

Winter temperatures in Quebec rarely top 20 degrees Fahrenheit (minus 6 Celsius), which is cold even for Canada. But visitors can remain relatively comfortable—and retain all of their digits—as long as they come prepared. That means, of course, thick hats, coats, scarves, and gloves, as well as insulated ski pants and snow boats for weathering the weather. But even more important is what you wear next to your skin. Thermal underwear is key and should be made of a material (not cotton) designed to minimize the retention of moisture. Otherwise, when you sweat under all those layers, you’ll wind up wet and chilled. For similar reasons, don’t make the mistake of wearing three sets of socks at a time because, again, your feet will get overheated, start to sweat, and then wind up colder than ever. Instead, wear a single pair of thick wool socks and bring along a backup pair should your feet get icy. Bonne chance!