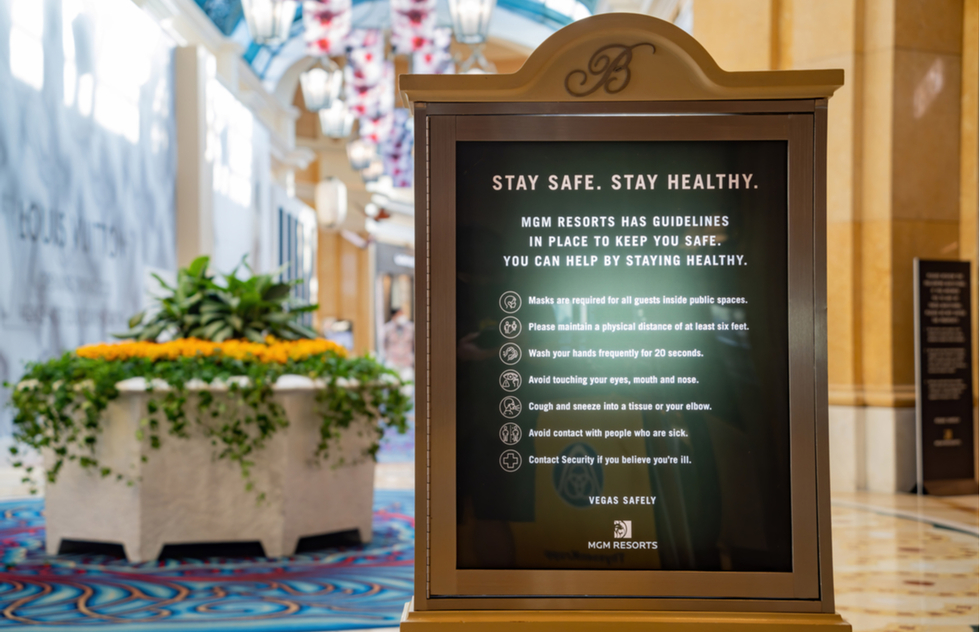 It has been about two and a half months since Las Vegas began reopening its casinos and resorts on June 4, following this spring's pandemic lockdown.

How have things been going since visitors started coming back? Not great.

Nevada's confirmed coronavirus cases skyrocketed in July, and, while the numbers have improved in recent days, NPR reports that the state still has one of the highest infection rates in the country.

Clark County, where Vegas is located, has had more than 50,000 confirmed cases and has been marked code red by the Harvard Global Health Institute. The recommendation for that threat level: "stay-at-home orders necessary."

But no such orders have been issued there.

As an alternative, casinos and government officials have agreed on safety protocols such as limiting capacity at hotels and on gaming floors, mandating masks (though there has been resistance from hoteliers and guests alike), conducting temperature screenings at resort entrances, installing sanitizing stations in public areas, and adopting social distancing measures such as spaced-out slot machines and plastic barriers between gamblers.

But if scientists are sounding a red alert over infections in Vegas anyway, wouldn't that mean Vegas is potentially sending sickness home with tourists?

We don't know for sure. You can blame, in large part, the dismal state of contact tracing in the United States. The country has no national system of identifying those who may have come in contact with infected individuals.

Instead, the task falls to local health agencies that remain underfunded and understaffed, even though the World Health Organization declared Covid-19 a pandemic back in March 2020. And that was, what, 37 years ago?

A new study that tracked smartphones illustrates just how bad things could be.

Conducted by data companies X-Mode and Tectonix at the request of the nonprofit investigative news organization ProPublica, the research indicates how far across the United States recent visitors to the Las Vegas Strip travel—and how fast.

The analysis looked at data collected over a four-day period (Friday–Monday) in mid-July from smartphones equipped with apps that report location ("in compliance with privacy laws," according to ProPublica).

During the four days, about 26,000 smartphones were identified on the Las Vegas Strip.

And during that same period, thousands of those same phones also showed up in 47 of 48 mainland states (Maine was the sole exception). The highest concentration of recent Vegas travelers was in nearby areas such as Southern California and Arizona, but hundreds of phones were also tracked in Texas, New York City, Chicago, Detroit, Cleveland, and, if you live in the contiguous U.S. (excepting Maine), your state—yes, yours.

Keep in mind that it's unknown whether any of the cell phone owners were infected with the virus. But their quick, far-reaching, sneeze-like dispersal across the nation should worry anyone concerned about how easily and widely this infectious disease spreads. Vegas is in trouble with the coronavirus, and visitors to Vegas are showing up everywhere.

Combine all that traveler mobility with the disease's asymptomatic carriers and its two-week incubation period—and throw in the USA's deficient contact tracing efforts—and it's at least plausible that the casinos of Las Vegas have done more to fuel the coronavirus surge than previously considered.

As ProPublica sums it up, "When it comes to Covid-19, what happens in Vegas doesn’t stay in Vegas."