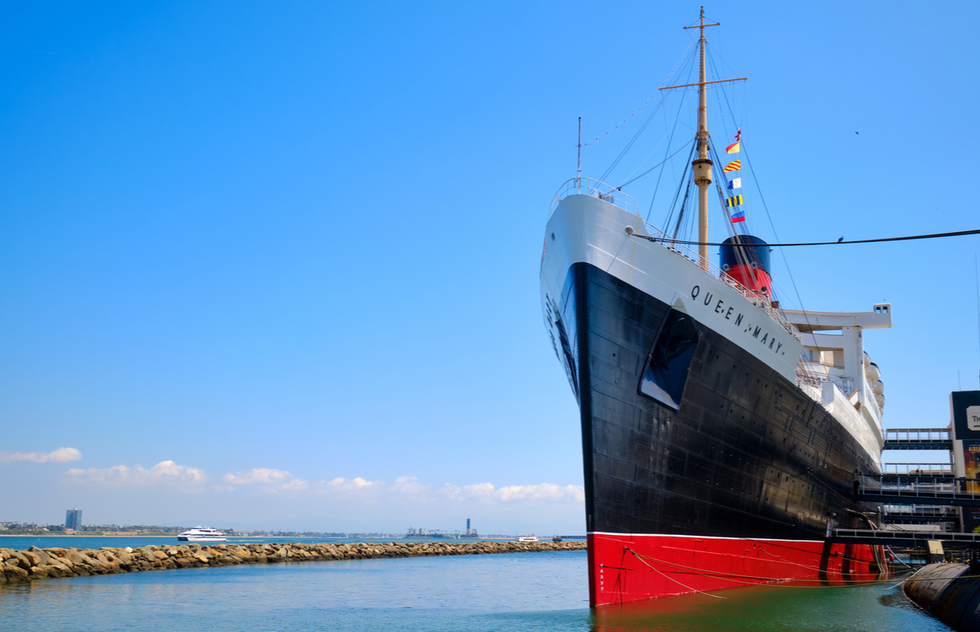 The ship, which has been moored in Long Beach's Queensway Bay since the Cunard Line put the vessel out of service in 1967, closed to the public in May 2020 due to the Covid-19 pandemic.

The closure followed a long period of neglect during which the grand ship—once a symbol of Depression-era sophistication and later a beloved landmark on California's coastline—became so run-down it was in danger of flooding and capsizing, according to news reports.

When word of this shoddy stewardship reached the Scottish town where the Queen Mary was built in the 1930s, alarmed preservationists launched a campaign to save the ship from its American guardians. Some Scots have even floated the idea of bringing it back to its birthplace—the River Clyde in the Glasgow area—though that's a long shot because the 85-year-old vessel probably wouldn't survive the journey.

Earlier this year, as recounted by Frommer's, the Queen Mary's negligent operators declared bankruptcy and the city of Long Beach took control of the old liner, vowing to make the hotel and museum shipshape again.

Now, a long-awaited report from the city auditor has revealed just how mismanaged the Queen Mary has been and how much work Long Beach will need to do in order to right this ship. (We will try to cut back on seagoing metaphors.)

According to the Long Beach Post, the auditor's report found that the city paid previous operator Urban Commons $23 million for critical repairs and then failed to keep track of the taxpayers' money, resulting in "excessive subcontractor markups, unnecessary projects and overpayment for some work."

What's more, the auditor concluded that only seven of the 27 repair projects that the money was supposed to address have actually been completed. So the faulty alarm systems, corroded hoses, decayed fittings, broken handrails, and other critical issues remain, on the whole, unfixed.

And that's not even counting the old Soviet submarine that's currently rusting alongside the Queen Mary. Once a tourist attraction in its own right, the sub has been closed since 2015 to all but the many raccoons infesting the eyesore. Long Beach would reportedly like to sue the responsible party to remove the submarine, if only anyone knew who, at this point, the thing belongs to.

As for the Queen Mary's former operators, Urban Commons, the owners of that now-defunct company were in bankruptcy court last week when a federal judge called them "fraudsters" and threatened to throw them into jail for pocketing more than $2 million in Paycheck Protection Program (PPP) loans intended to help small businesses during the pandemic. (Urban Commons founder Taylor Woods later testified that the PPP application was a "clerical mistake.")

Where does all this leave the Queen Mary?

After years of neglect, fraud, waste of public funds, and waste of an irreplaceable historical artifact, Long Beach City Manager Tom Modica wrote in a response to the auditor's report that a "new model is warranted for this asset.”

Well, no duh, Tom. Clearly, the situation isn't tenable for anybody except maybe the raccoons inhabiting that submarine.

Far foggier, though, is what a new way forward might possibly entail—and who's going to pay. Because after spending $23 million of the taxpayers' money without giving them anything to show for it, you can probably add the public's patience to the long list of things Long Beach has wasted.