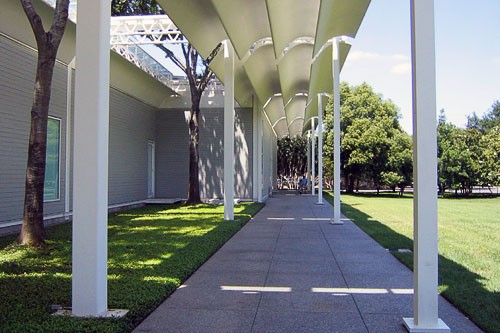 After more than six months of renovations, the Renzo Piano-designed main building of Houston's Menil Collection—home to an eclectic horde of 17,000 artworks, from antiquities to contemporary creations—reopened to the public on Saturday, September 22.

The interior has been extensively reconfigured to make the place less cluttered and to make room for new and expanded galleries, allowing for the permanent installation of more indigenous art from the Americas and mind-bending canvases by European Surrealists.

Curators have carried out another reconfiguration with regard to diversity, increasing the exhibition space given to artists of color and women. Painters such as Perle Fine and the Guyana-born Frank Bowling are now prominently featured. In fact, Bowling's 1970 The Middle Passage, a sherbet-colored silkscreen with photos and maps meant to evoke the practice of slavery, is the only work you'll find in the refurbished lobby.

The museum is brighter now, too, thanks to new lighting, the removal of window-blocking obstructions, and freshly polished black pine flooring.

“If you know the Menil," Texas Monthly quotes museum director Rebecca Rabinow, "it will look like you’ve just gotten a new glasses prescription.”

The museum complex isn't done unveiling new stuff, either. In November, the Menil Drawing Institute, housed in a separate, new building, will open its doors.

And enjoying these improvements won't cost a thing—admission to the Menil Collection remains free.