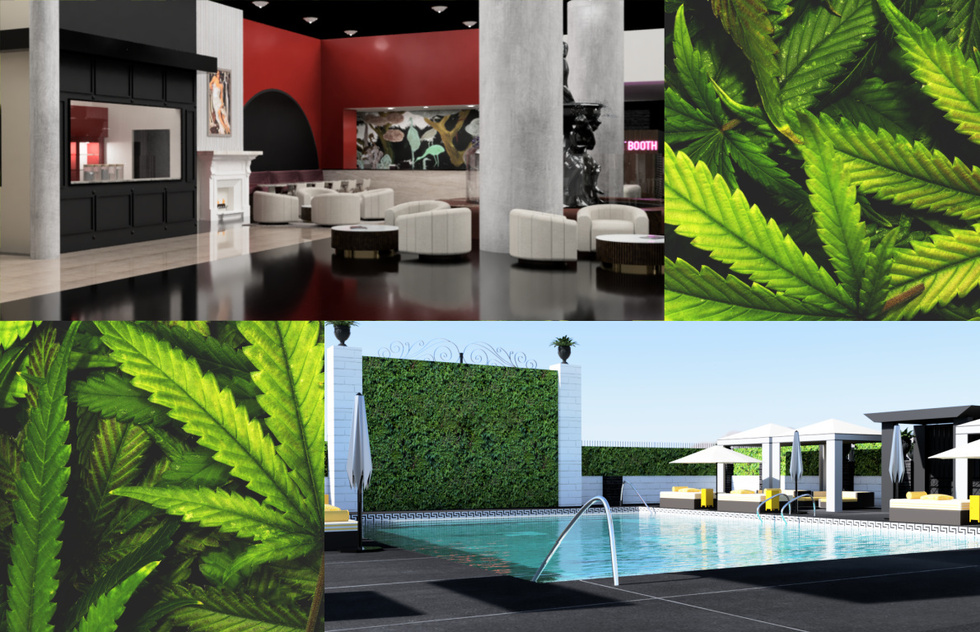 This spring, Las Vegas will open what's being billed as its first cannabis-friendly hotel. The city's many motels with old curtains reeking of doob evidently don't count.

Known as The Lexi, the 64-room off-Strip property will occupy the building of the recently acquired Artisan Hotel (1501 W. Sahara Ave.), which the new owners, Arizona-based Elevations Hotels and Resorts, are giving a multimillion-dollar makeover.

When the transformation is complete, the hotel will have redesigned guest rooms, a new restaurant, a reconfigured lobby, an updated pool, and a newfound commitment to "normalizing the idea of cannabis in travel," according to a press release.

To that end, the entire fourth floor will be designated pot-friendly, with each room featuring a "state-of-the-art RestorAir filtration system that employs Advanced Oxidation Cell (AOC) technology," per developers.

The Las Vegas Review-Journal reports that a ground-floor cannabis lounge is also in the works, though the hotel has no plans to sell cannabis products on site.

Don't worry: There are plenty of other places to buy pot (legally) in Vegas, starting with Planet 13, the self-described largest dispensary on Earth.

The Lexi's culinary offerings will include a Cajun-inspired steakhouse led by former Hell's Kitchen contestant Jordan Savell, a cocktail lounge, and a walk-up cafe amid the lobby's towering ceilings and newly installed water feature.

A fun-loving atmosphere will be encouraged by live music in the lobby and a summer schedule of pool parties in and around the "European-style pool."

"European" apparently means that wearing tops will be optional for swimmers, according to TheStreet.

The Lexi hasn't set an official opening date yet, but Elevations CEO Alex Rizk told the Review-Journal to expect the rebranded hotel to start welcoming guests in early April. That's just in time for potheads' high holy day of 4/20.

The hotel's developers say nightly room rates will start at $99 during the week and $149 on weekends. For more info, go to LexiLasVegas.com.