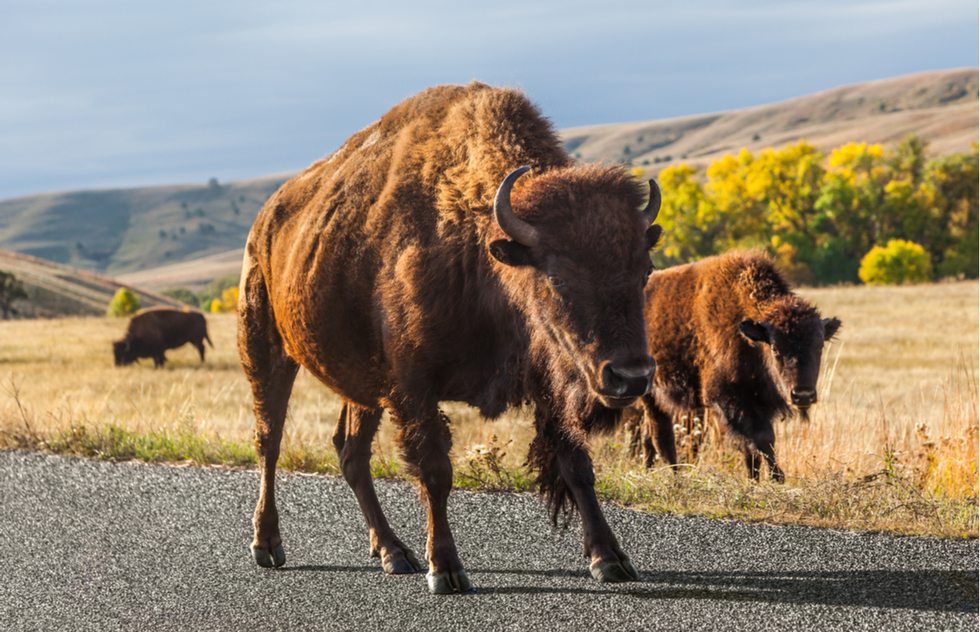 When it comes to bison, it's always the season for social distancing.

A tourist learned that lesson the hard way this week in South Dakota's Black Hills—and her terrifying encounter with a very angry buffalo was caught on video.

The tourist, a 54-year-old Iowa woman, was traveling as a passenger with a group of motorcyclists through Custer State Park, according to the Associated Press.

The 71,000-acre preserve is home to a herd of 1,300 bison. On Wednesday, some of them were crossing a road in the park when the bikers pulled up and stopped to let the animals pass.

The Custer County Sheriff's Office told news reporters that the Iowan then got off her ride to approach a bison calf.

A video shot by an onlooker and posted to YouTube shows what happened next: An adult bison charged and attacked the woman, spinning her violently while her belt and jeans were caught on the animal's horns.

Eventually, the jeans ripped, the buffalo ran away, and the woman—sans pants—fell to the ground.

In the video below, the attack occurs a few seconds after the 2-minute mark. Fair warning: Witnesses are heard using the sort of language you'd probably use, too, if you were steps away from a one-ton beast doing the shot put with a tourist.

The AP reports that the woman was taken from the scene by medical helicopter. She survived, but suffered injuries in the pelvic area.

It's worth repeating what the park's visitor services manager, Kobee Stalder, told reporters: “These are wild and dangerous animals, even though they look docile. You have to respect these animals.”

The National Park Service recommends staying at least 25 yards away from bison at all times. In addition to being huge, the creatures are unpredictable, the NPS warns, and can run three times faster than humans.

Custer State Park is only about an hour's ride south of Sturgis, site of an annual motorcycle rally that was criticized as a kind of Covid-palooza this year, producing alarming scenes of enormous crowds filled with maskless revelers standing shoulder-to-shoulder and, perhaps even more disturbing, enjoying the music of Smash Mouth.

It's reassuring to note that bison aren't always wreaking woolly vengeance on nosy humans. In April, the same state park released heartwarming footage of newly born bison during this year's calving season. Watching that video will help clear your mind—while providing a much safer way to appreciate wild animals.