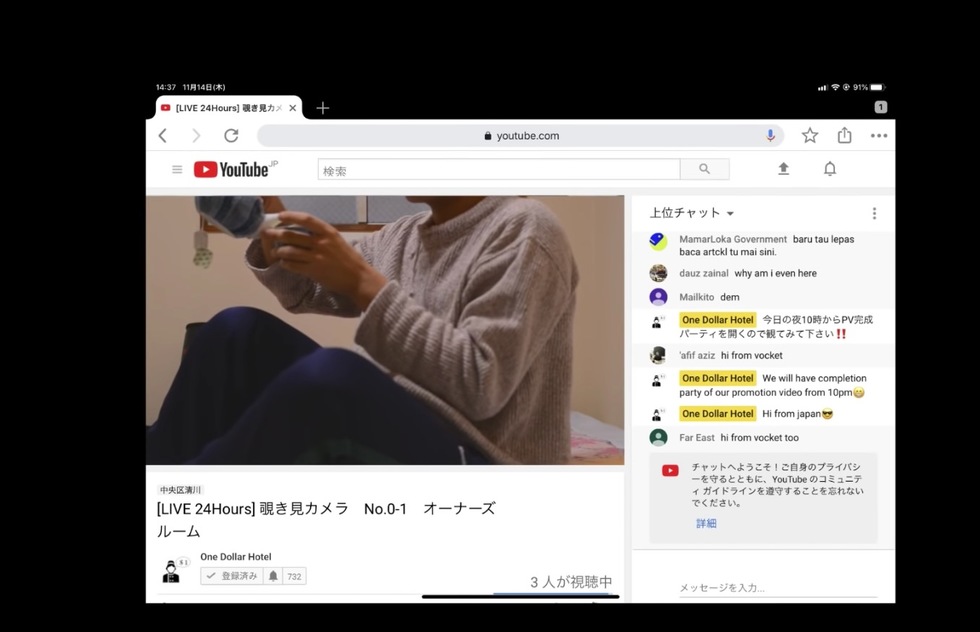 Screenshot of YouTube channel for Asahi Ryokan in Japan

Exhibitionists on a budget have a new lodging option in Japan.

The Asahi Ryokan, located in Fukuoka on the subtropical island of Kyushu, is offering one room on the property at a rate of just 100 yen—or $1—per night.

The catch: Guests have to agree to let the inn livestream the room 24/7 on its YouTube channel.

According to news reports, the inn's owner, Tetsuya Inoue, came up with the idea as a way to grab attention and improve the place's low occupancy rate.

In a promotional video, Inoue says: "This unique concept is the first one in the hotel industry." Apparently, that motel where the owner hid in the ceiling to spy on his customers doesn't count.

In addition to agreeing to the livestream, guests of the ryokan are prohibited from getting naked or committing "lewd acts" while on camera. The bathroom and an area for changing clothes are both out of sight of the YouTube audience, and the feed is strictly visual—no audio.

You don't have to leave the lights on while you sleep in the $1 room; your viewers will just have to stare at a darkened screen. Stay vigilant about not broadcasting your passport details or credit card information—or this adventure could end up costing you a lot more than $1.

On days when the room is unoccupied, the inn's YouTube channel will stream Inoue at work in his office.

Otherwise, you can thrill to the sight of strangers scrolling through their phones here: