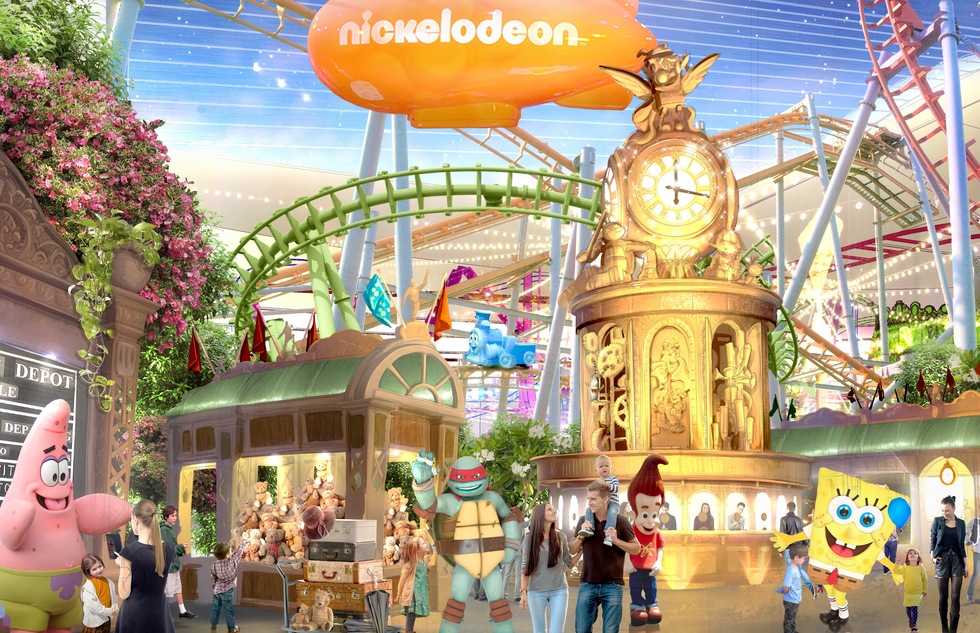 Nickelodeon's New Indoor Theme Park Is the Biggest in the U.S.

The biggest indoor theme park in the United States opens in New Jersey this week.

Nickelodeon Universe spreads across 8.5 acres and 35 rides and attractions, all related to the popular kids' TV network and all able to be enjoyed without such irritants as fresh air and sunshine.

Features include the Teenage Mutant Ninja Turtles–inspired Shellraiser roller coaster along with live shows (and buckets of goo) at the Nickelodeon Slime Stage. There will be opportunities to interact with SpongeBob SquarePants, Dora the Explorer, and other animated faves.

While the scale of the place may not be as gargantuan as outdoor theme parks, advance word suggests that thrill rides will be several notches above your standard rinky-dink carnival.

In fact, there will be two record breakers on site, according to the Philadelphia Inquirer. The Shellraiser's 122-foot drop at an angle of 121.5 degrees makes it the steepest roller coaster in the world. Another ride, the Shredder, is officially the longest, tallest free-spinning roller coaster.

This is the second Nickelodeon Universe indoor theme park to open. A smaller version operates at the Mall of America in Bloomington, Minnesota.

The new Nick site is also part of a mall: the sprawling American Dream complex in the Meadowlands of East Rutherford, New Jersey. Opening in stages through spring 2020, the retail and entertainment behemoth will eventually have more than 350 stores, a DreamWorks-themed water park, and even indoor skiing and snowboarding.

The mall is situated next to MetLife Stadium, home of the NFL's New York Giants and Jets as well as a frequent concert venue.

For families visiting New York City, new public transit options should make it easy to tack on Nickelodeon Universe as a day trip. New Jersey Transit has introduced an express bus to American Dream from the Port Authority Bus Terminal in Midtown Manhattan. And starting on October 28, NY Waterway is offering a shuttle bus-ferry combo that will get you from Manhattan to the Meadowlands in under an hour.