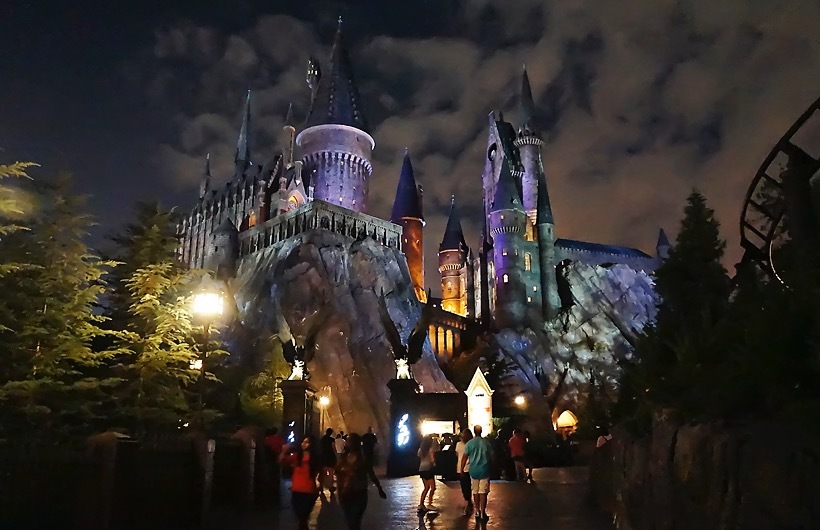 Harry Potter is getting into the holiday spirit at Universal theme parks in Orlando and Southern California for the first time this year.

In Central Florida, seasonal features at Potter-related attractions were unveiled on November 18 at both of Universal's Florida parks, Universal Studios and Islands of Adventure. In the latter, a yuletide spell has been cast on Hogwarts Castle, where, after dark, carol-warbling ghosts, snowy owls, Quidditch players, and a Christmas tree can be spotted covering the exterior via projection mapping and magical lighting.

You'll also find festive decorations and holiday-themed food—such as hot Butterbeer—in the village of Hogsmeade and, over at Universal Studios, in Diagon Alley. Also there, the '60s-style pop act Celestina Warbeck and the Banshees perform specially written tunes such as “My Baby Gave Me a Hippogriff for Christmas.”

Other holiday events at Universal Orlando include a parade with new floats and balloons (thanks in part to an assist from Macy's, a longtime partner) featuring the Minions from Despicable Me as well as other animated characters from Madagascar and Shrek. The Grinch returns for a live show based on the beloved Dr. Seuss book.

California's Universal Studios Hollywood, meanwhile, is launching its holiday offerings on Friday, November 24. They will feature the same Christmas makeover for Hogwarts Castle and Hogsmeade, as well as the Grinch show (though no parade or Celestina Warbeck).

All these events are included in regular admission fees and will continue through January 6 at Universal Orlando and January 7 at Universal Studios Hollywood. Here's a promo for the Florida stuff:

Universal is, of course, not alone among theme parks getting merry this time of year, but this is the first time that its Harry Potter areas have gone all out. All of the big theme park names—including the biggest, Disney's resorts in Orlando and Anaheim—have discovered they can give themselves a hefty holiday profit if they roll out special events and holiday decorations to attract families with kids on break from school. In fact, according to Theme Park Insider, the week between Christmas and New Year's is the industry's busiest time of year.