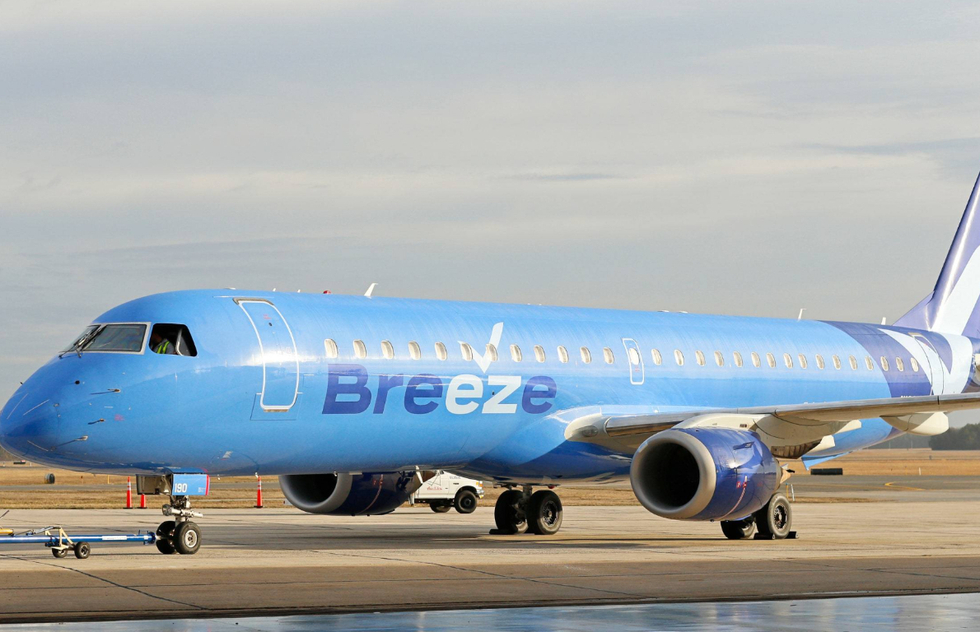 UPDATE, April 27: Since announcing the below routes, Breeze Airways has released plans to add daily nonstop service to its 30th destination—Orlando, Florida. The flights will commence from Charleston, South Carolina, starting June 23, with a special introductory rate of just $39 one way.

The airline, which was started by JetBlue founder David Neeleman in May 2021, recently announced plans to nearly double its route network by the end of the year. The company's business model is based on offering nonstop service for travelers in smaller cities and suburban areas.

To that end, Breeze is adding eight flights from Westchester County Airport (HPN) in White Plains, New York, about a 40-mile drive from Manhattan.

The airline's service to Los Angeles, Las Vegas, San Francisco, and Charleston will be daily. As USA Today points out, that's different from most Breeze routes, which are operated only a few times per week.

According to a Breeze press release, the carrier will be the first airline to offer commercial flights from Westchester that go farther west than Chicago.

In the statement, Neeleman touts Breeze as a convenient alternative for leisure travelers in the New York Metropolitan Area who want to avoid the region's larger, more congested airports.

“Having lived so close to Westchester airport for many years, I wasted tons of time driving to JFK or Newark to travel to the west coast,” Neeleman says in the statement. "Now we’ll offer daily flights to the highest demand markets from New York."

In addition to the new Westchester routes, Breeze is adding two new nonstop flights between Las Vegas and Hartford, Connecticut, and between New Orleans and Savannah.

For more information or to book a flight, go to FlyBreeze.com.