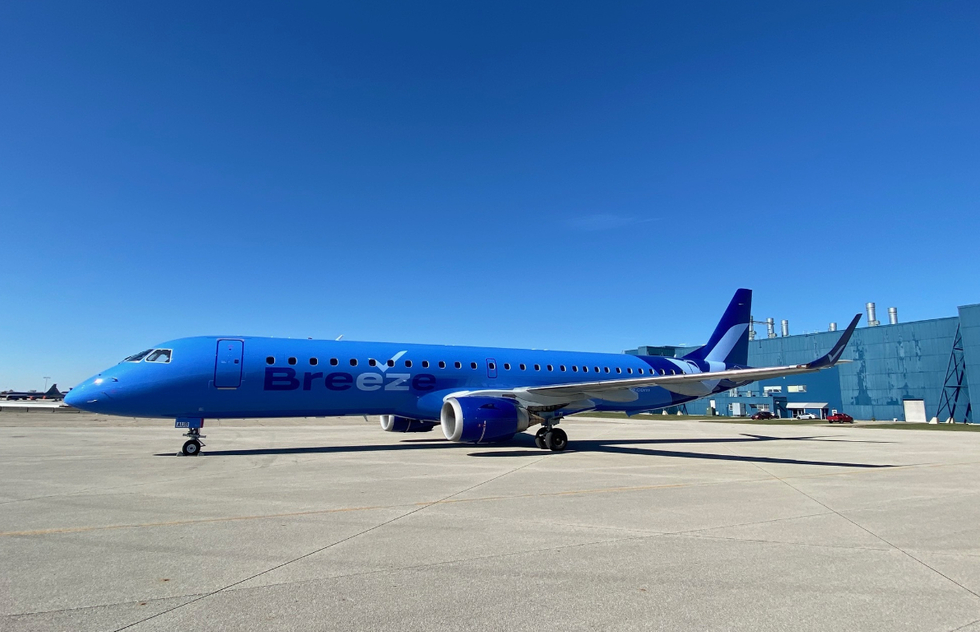 A new low-cost airline dedicated to serving small and "underserved" U.S. cities is set to take off this week.

The lowest fares are the airline's equivalent of basic economy tickets and must be purchased by June 1 for travel by February 15, 2022.

The first flights will commence on Thursday, May 27, and will connect Tampa, Florida; Charleston, South Carolina; and Hartford, Connecticut.

By the end of July, Breeze will serve 16 U.S. destinations, focusing most of its operations on Tampa, Charleston, New Orleans, and Norfolk, Virginia.

Though the new airline, which was originally supposed to debut in 2020, is headquartered in Salt Lake City, there are currently no available routes west of Texas.

But travelers in the American West shouldn't feel left out. Another fledgling low-cost carrier, Avelo Airlines, launched just last month from a base at California's Hollywood Burbank Airport with a route network centered on smaller cities in the Pacific and Mountain time zones (though Avelo will reportedly soon expand to Tweed New Haven Airport in Connecticut).

Investors at both Avelo and Breeze are hoping to catch the attention of returning leisure travelers in markets with less competition than in huge cities.

The first 16 destinations on Breeze's route map are "just the beginning," Neeleman said in a press statement. "There are so many city pairs needing nonstop service around the country, we have a further 100 cities under consideration."

Targeting so-called secondary locations that larger airlines often overlook is a big part of Breeze's business plan (as Frommer's has documented, smaller airports were the first to lose flights during the worst of the Covid-19 pandemic).

"A staggering 95% of Breeze routes currently have no airline serving them nonstop," Neeleman claims. In other words, residents of those areas often have to take inconvenient and pricey connecting flights to get where they want to go.

Adopting "Seriously Nice" as its motto, Breeze wants to re-create the cheap-but-not-torturous experience that made JetBlue beloved (though the latter has gotten awfully fee-happy of late).

At the moment, Breeze has only rolled out the $39 introductory fares for its first 39 routes, so it's not clear what tickets will cost after the sale ends. But, according to the Washington Post, you can expect base fares in the ultra-low-cost, Spirit Airlines-esque neighborhood for Breeze's cheapest category of fares going forward.

Comparing his airline's services to the mainstream trend of expensive, time-consuming connecting flights for travelers journeying to and from smaller cities, Neeleman told the newspaper, “I would love to be able to get people there twice as fast for half as much money.”

Most airlines have labeled their least expensive category "basic economy." Breeze uses "Nice." With that class of ticket, you can only board with one personal item; pay $20 more to use the overhead bin or check a bag. There are also fees for choosing a seat ($10), getting more legroom, and other features.

The next class up, "Nicer," comes with overhead bin space for your carry-on, one complimentary checked bag, extra legroom, and a few other basic services now considered perks in the skies.

Breeze's "Nicest" category, aka business class, will debut in the autumn.

The new airline charges no change or cancellation fees for any class of ticket, including the cheapest one—most U.S. airlines exclude the lowest fares from that benefit—and a passenger can change or cancel a flight up to 15 minutes before scheduled departure without penalty, according to the company's press release.

Other policies bolstering the airline's claims of niceness: free onboard Wi-Fi and free in-flight entertainment (streamed to personal devices) for everybody.